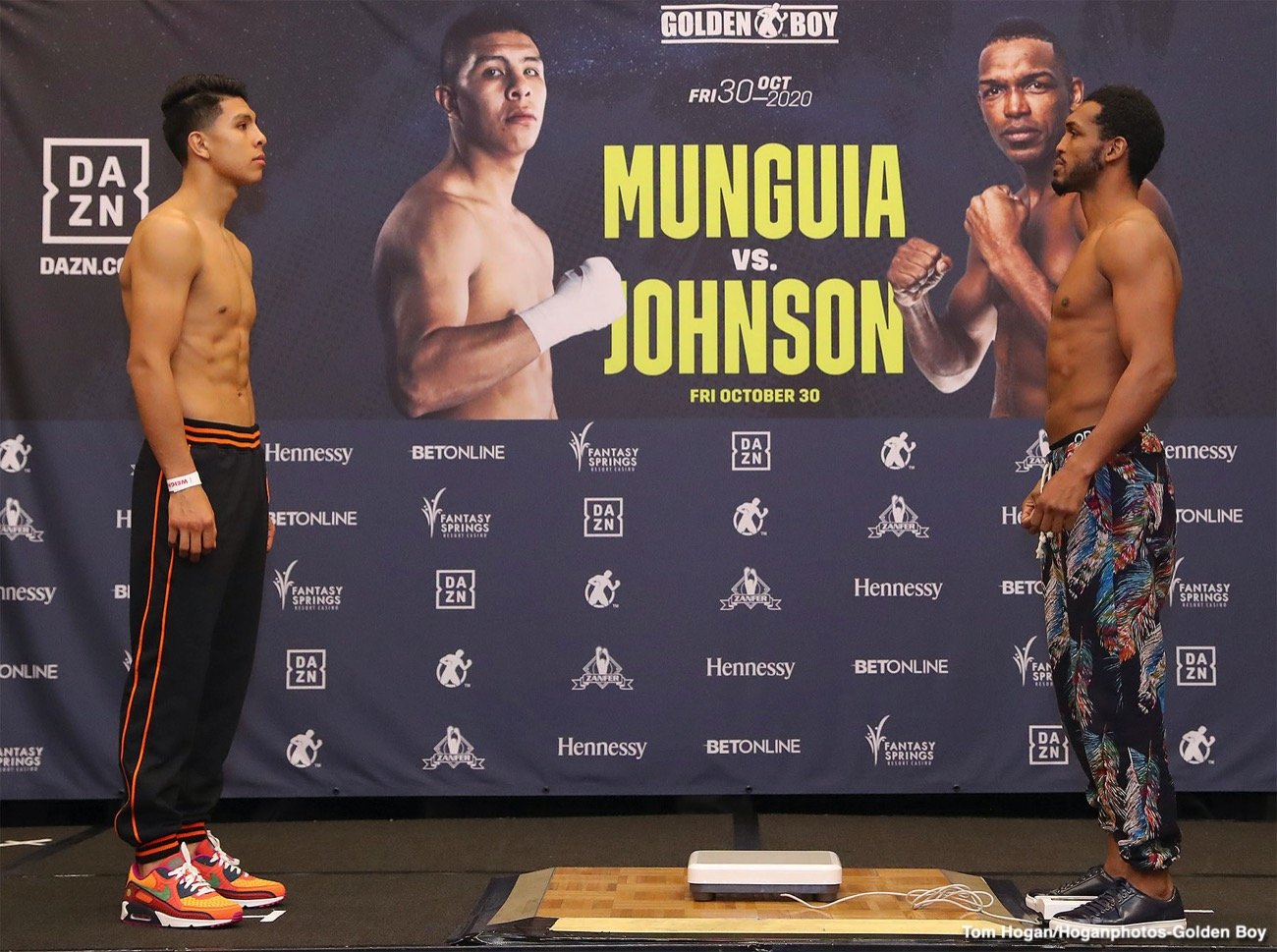 By Dan Ambrose: Jaime Munguia and his middleweight opponent Tureano Johnson both made weight on Thursday for this Friday’s 12-round headliner contest promoted by Golden Boy on DAZN.

Munguia is hoping to use a victory over Johnson as a springboard for a world title shot in 2021 against Gennady Golovkin, Jermall Charlo, Demetrius Andrade, or Canelo Alvarez. He’s ready to fight any of those champions next year.

The Munguia-Johnson contest will take place at the Fantasy Springs Hotel Casino in Indio, California.

Munguia and Tureano in great condition

The vacant World Boxing Organisation Inter-Continental Middle Title will be given to the Munguia vs. Johnson fight winner. 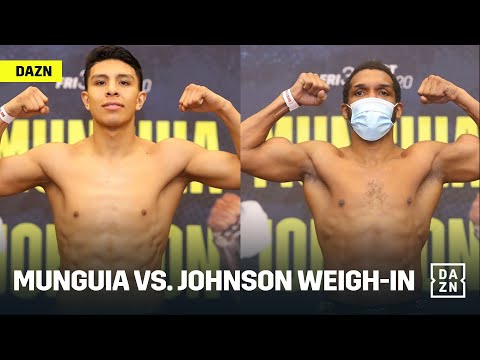 “I’m thrilled to be back this year,” Munguia said to Fino Boxing. “More than anything on my defense and my speed. We’ve tried to increase our resistance and power so we can be ready for all the middleweights.

“Well, I don’t think I’m a perfect fighter, but everyone makes mistakes. I also see tons of holes in his [Tureano] boxing ability. I know I have to be careful because he has a ton of experience in the Olympics and professionally.

“Tureano has great experience, and I respect him as a fighter, and he’s a great boxer. I think we are getting better every day, and this is our moment to get this win,” said Munguia.

Tureano could expose Munguia’s lack of defense and head movement in this fight, just as other fighters have done. Munguia says he’s improving, but he hasn’t made progress in his past fights.

The reason Munguia has been able to keep winning despite his flaws is size and power.

When he was fighting at 154, he didn’t have to worry about defense fighting the weaker opponents that his promoters matched him against.

Jaime had the size advantage at 154

Munguia was huge for the junior middleweight division, which helped him cover up all the areas that he needed to improve on. He did capture the WBO 154-lb title in beating former welterweight Sadam Ali, but that wasn’t a great opponent.

Sadam lacked the size to fight at 154, and the only reason he briefly held the WBO title is that he beat an injured and old Miguel Cotto.

Instead of fighting those guys, Munguia fought these fighters:

Those fighters were the best of the lot that Munguia fought during his time at 154. What’s unknown is if Golden Boy purposefully kept Munguia away from the talented fighters at 154.

All you can say is Munguia beat the guys that Golden Boy stuck in front of him, but they’d didn’t match him tough. Hence, Munguia was able to stay unbeaten at 154 but with a little help from the questionable scoring in his fight against Hogan last year.

“I think it should be,” said Munguia when asked if his next fight will be for a world title. “I’m ranked high in all the sanctioning bodies [at middleweight]. So it should be next year that I’ll be fighting for another world title.

“Who would be my ideal opponent? Truthfully, I do want to fight the best, and they are the best at 160, so anyone of those names is good,” Munguia said when asked if he’d like to take on the 160-pound world champions Gennadiy Golovkin, Canelo Alvarez, Jermall Charlo or Demetrius Andrade.

“I’m happy to be back on October 30th. I want to put on a great show for the Mexicans and everyone else who supports me. We are ready, and we had a great camp to have a great showing on Friday night. So tune in this Friday, October 30th,” said Munguia.

Golden Boy will likely save Munguia for Canelo rather than Golovkin, Andrade, or Charlo. Unless Munguia does something special against Johnson, there won’t be much interest in a fight between him and Canelo next year.