Hearn goes off on Wilder’s expired fight with Tyson Fury 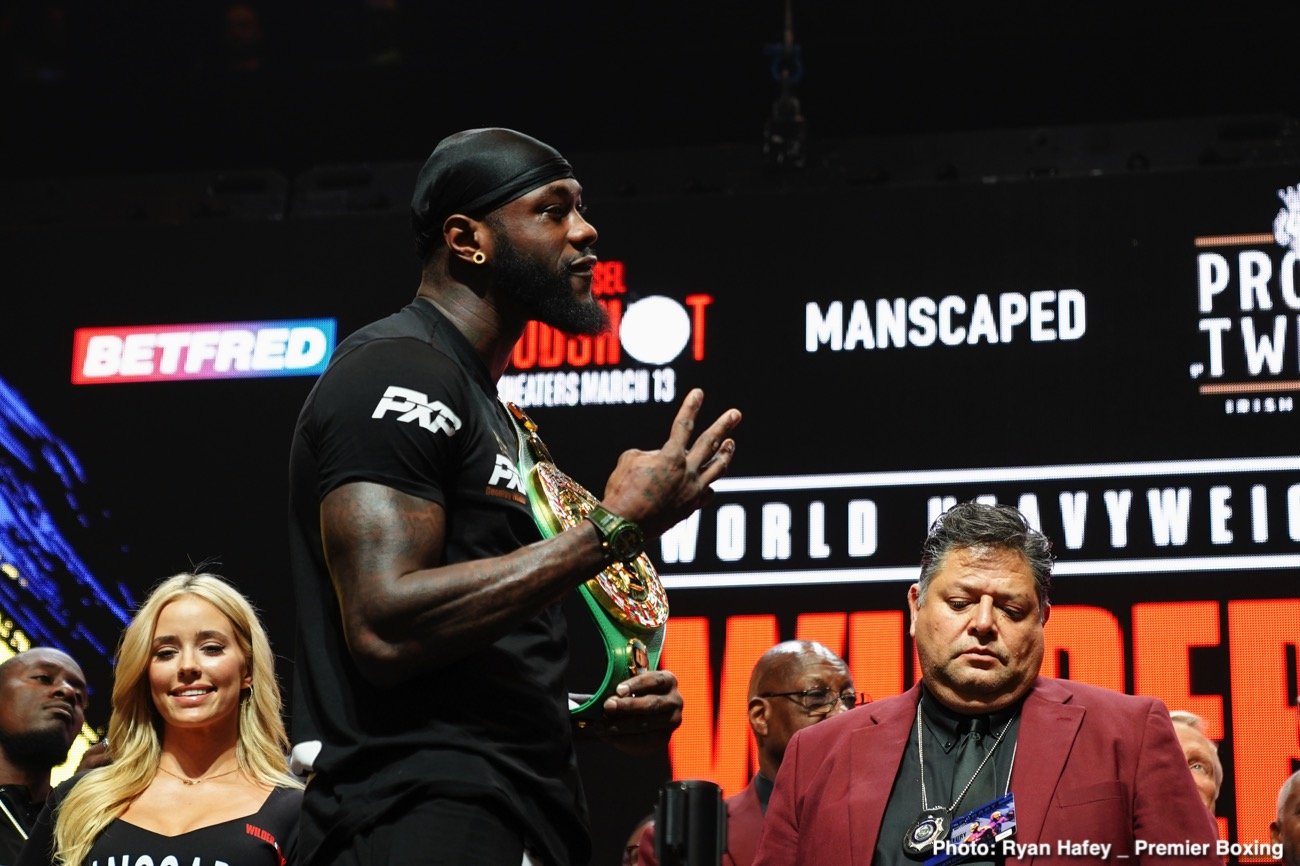 By Jeff Aronow: Eddie Hearn is both baffled and disguised by former WBC heavyweight champion Deontay Wilder and his management team, letting his rematch clause with Tyson Fury expire this month without having contract language that would protect him.

Wilder (42-1-1, 41 KOs) has been dealing with recovery from bicep surgery recently, and he hasn’t been able to return to the ring as quickly as many had hoped. Hearn doesn’t understand how Wilder or his team would have let the contract expire with Fury (30-0-1, 21 KOs) without raising a fuss about it.

Like many people in boxing, Hearn wonders whether Wilder, 35, still has his heart in the game. He’s made millions in recent years, and he no longer needs to fight for him to live comfortably as a wealthy man for the rest of his life.

Could it be that Wilder wanted to wait until the crowds returned before fighting Fury again? If that’s the case, it’s still a bad idea for him to have let his contract expire for the trilogy match.

The deal that Wilder will likely get when he and his promoters negotiate a fight with Fury in a year or two probably won’t be as good financially as he would have gotten in a third match this year.

Wilder can’t be counted on to keep winning long enough for a third fight with Fury in 2022 or 2023. The Bronze Bomber Wilder looks too shaky to win two fights in 2021 and a fight or two in 2022 while waiting for the third clash with Fury.

“Deontay Wilder has just vanished from the earth and just doesn’t fancy fighting anymore, or his advisers have done the worst contract in boxing history,” said Eddie Hearn to IFL TV. “It just expired.

“We’re in a global pandemic. You’re telling me that you’ve done a contract that doesn’t protect yourself against force majeure [Law: unforeseeable circumstances that prevent someone from fulfilling a contract], and you no longer have a rematch clause because it just expired.

“I don’t believe Shelly Finkel would have done that, but Arum and those guys are goading them, saying, ‘Goodbye, it’s expired.’ And Shelly is coming out, going, ‘I hope we can do the fight.’

“Why aren’t you coming out to protect your rights? Say, ‘No, you signed the rematch, here’s the contract. We’re having it.‘ ‘We’ll still take it.’ Where’s Deontay Wilder?

“When Anthony Joshua lost to Andy Ruiz, there wasn’t one day that would pass without him thinking about avenging that defeat,” said Hearn.

Maybe Wilder is too hurt for him to return to the ring in 2020. With the big pay-day he’d have gotten in fighting Fury a third time; it’s impossible to believe that he would duck the fight.

Wilder not talking might be him feeling down from suffering a humiliating seventh-round knockout to Fury last February. Deontay might not be willing to face the boxing public yet and deal with all the criticism he’ll receive from fans.

The problem with Wilder hiding out is the fans will still be there when he eventually emerges, and they’ll launch into him in the same way they would have earlier.

It would be better for Wilder to get it over with and deal with it once and for all. If Wilder beats Fury in the third fight, he would be getting the last laugh, and he could gloat about it.

“When Dillian Whyte got knocked out. I know he was only down for eight seconds,” Eddie continued. “As soon as he got out of that ring, and said, ‘I want that fight.

“All he’s thought about since then is winning that rematch. So what on earth has happened to Deontay Wilder? Are you telling me you don’t want to avenge your defeat?

“You made your money and you want to get out. Good luck to you, but some people are made of different stuff. The people I know, AJ, Dillian Whyte, suffered a defeated.

“They want to come back. They won’t rest until they get revenge or at least attempt revenge. I just can’t understand. And what’s with the silence [from Deontay]?

“If you don’t want to fight again or try and win your belt back, to each their own. I got to say, the best thing that’s happened for AJ is Tyson Fury winning.

“I believe in that team, Tyson Fury, MTK, Top Rank, Warren, John Fury, and whoever else is in that team as well, they all want to fight AJ.  They all believe they can beat AJ,” said Hearn.

It’s doubtful that Wilder will be done with boxing because he can still make a lot of money when he returns to the ring next year. Where it could be a problem for Deontay is if he doesn’t fight at all in 2021.

Wilder would have a lot of inertia to breakthrough, and that could be hard if Wilder is hesitant to fight because of the pandemic. He could wind up waiting until a vaccine is produced and made available to the public. 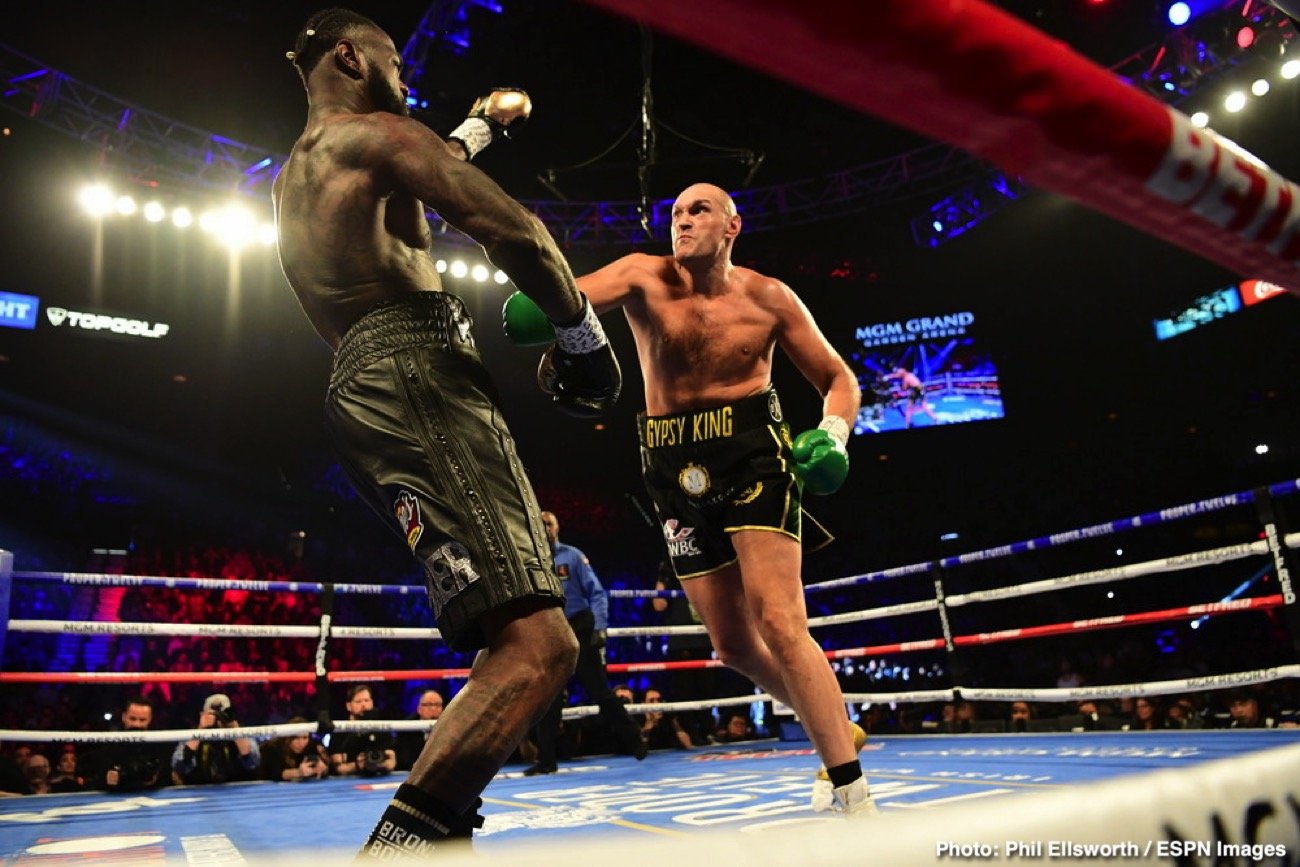 “I believe that even if Wilder won, I don’t know that we would have ever got the AJ fight made,” Hearn continued. “I know we’ll get the Fury fight made. It’s different characters.

‘I just don’t understand. How can you have a contract that evaporates? How can you let a contract expire and evaporate? Do you know how much pressure I was under when AJ lost to force that contract with Andy Ruiz.

“I didn’t sleep for weeks because they tried to get out of that rematch. And I would not accept it. I fought tooth and nail. He [Joshua] wanted that fight more than anything.

“If I had turned around and said, ‘The only way you can get that fight is if you fight for nothing,’ he would have done it. I know people say that there’s no gate.

“Alright, so there’s no gate. Do you want the rematch? Do you want to win your belt back or do you want to let it expire and never fight him [Fury] again? He [Wilder] can’t be taken seriously again if he comes back and has a 10-rounder.

“You lost your throne. Do you not want to fight for it anymore? None of this makes sense. I’m worried about our business, but I’m fascinated to see how this plays out.

“Just waiting for a statement, saying, ‘We have a contract. We’re enforcing our contract, and that fight is next.’ Wilder comes out and says, ‘I’m fighting Fury. I want my belt back. I want this,'” said Hearn.

With the problems Wilder has had in trying to negotiate a fight with Joshua in the past, it’s probable that they wouldn’t be fighting if Deontay had beaten Fury.

If Hearn was on board with making it a 50-50 deal, then Wilder would take the fight. But if Hearn started with the flat-fee stuff that he had talked about wanting to give Wilder years ago to face Joshua, the fight wouldn’t happen.

Wilder will have to fight a warm-up

“If Wilder no longer has the contractual right to fight, then he’s going to have to fight a warm-up or someone,” said Hearn about Wilder if he no longer can take the rematch with Fury.

“He may not fight again. If your hearts not in it, and you’ve made the money he’s made in the last couple of fights. I wouldn’t. This is a tough sport. Maybe he doesn’t want to be a fighter.

“Maybe he’s lost the love for the sport, and that can happen. I just can’t make it out. The defeats Joshua vs. Ruiz and Wilder vs. Fury were quite similar.

“You can argue they were humiliating, especially AJ, because everybody thought he was going to win, and he sold out Madison Square Garden.

“It all came crumbling down. Do you know any fighter that wouldn’t be thinking everyday about revenge and getting that rematch? We haven’t even heard from him [Wilder], and they’ve let the contract expired if that is the case,” Hearn said.

Wilder will need to take more than just one warm-up fight before he gets the third match with Fury. In 2021, Fury is already set to fight Joshua twice, and that’s going to consume the entire year. At best, Fury won’t be available to fight Wilder until 2022 at the earliest.