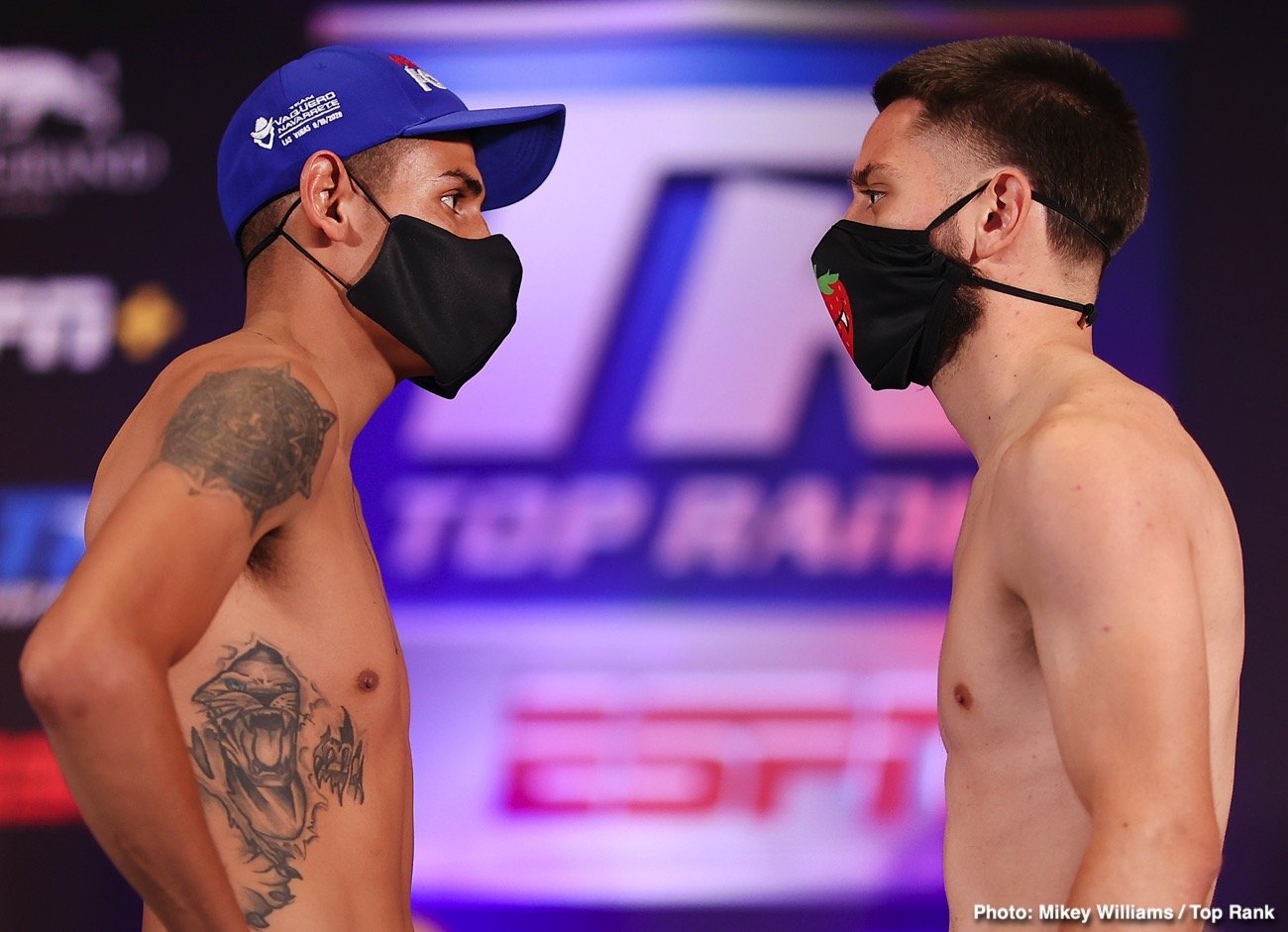 The Navarrete vs. Villa undercard will be shown on ESPN+.

Villa weighed in at 125 lbs. On the line for the fight will be the vacant WBO featherweight strap, which was recently vacated by Shakur Stevenson. It’s a good thing for the 25-year-old Navarrete, who has outgrown the 122-pound weight class.

Magdaleno was the original opponent for Navarrete

Villa replaces former WBO super bantamweight champion, Jessie Magdaleno as Navarrete’s opponent, as he wasn’t altogether pleased with the money offered to him for the fight.

The fight card taking place behind closed doors, there wasn’t the kind of money available for the fighters like Madaleno without like gate revenue. It’s a missed opportunity for Magdaleno, considering that it would have been a big boost for his career if he’d taken the fight with Navarrete and beaten him.

The title is less important than it is for the Navarrete vs. Villa winner to look good and show that they’re among the best in the division.

WBC featherweight champion Gary Russell Jr is recognized as the top guy at 126, but it’s unknown how much longer he intends on staying in the division.

Once Russell clears out, the Navarrete-Villa winner will likely be viewed as the new #1 at 126

Navarrete is trying to become a star, and he’s now in the right division to make that a reality. Friday’s fight against Villa is the perfect contest for Navarrete to win over many new boxing fans, who will be stuck at home due to the pandemic.

Navarrete looking soft around the midsection

The eight-year professional Navarrete may not be able to make 126 for long as well, as he’s still growing, and his midsection looks a little soft. That’s not a good sign for someone that just now moved up to 126.

It won’t be surprising if Navarrete is soon struggling to make 126 in the same way he was at 122. If he ends up at 130 or 135, he could have problems against the talented fighters in those weight classes.

With Navarrete’s size advantage, he should beat the Villa without any problems on Friday night. Although Villa, 23, is undefeated, he hasn’t fought anyone that comes close to Navarrete’s talent, and that’s going to be a problem for him.

Ruben will use his skills

Villa’s lack of punching power means that he will have to try and beat Navarrete by out-landing him. That’s a hard way to win against a fighter that possesses the kind of power that Navarrete does.

“I feel like I’m ready and I’m in my prime,” said Villa to ESPN.com. “I feel it’s the best chance for me to go, right now. I’m ready, we’re very confident about winning this fight. So yeah, I’m ready as can be.”

Villa’s best chance of winning is to box and not get caught standing still for any length of time. Navarrete likes to overwhelm his opponents with power shots, and he’s someone that isn’t going to let up for an instant.

Other weights on Friday’s Navarrete vs. Villa card: