By Matt Lieberman: Devin Haney is wary of the risk that veteran Yuriorkis Gamboa poses to him ahead of their November 7th fight on DAZN. Haney (24-0, 15 KOs) is making his second defense of his WBC 135-lb title, and his handlers have picked a dangerous foe in former IBF/WBA featherweight champion Gamboa (30-3, 18 KOs).

According to Devin’s promoter Eddie Hearn, Gary Russell Jr was under consideration for Haney’s next fight, but he failed to return the contract for the fight. However, he says Russell could be Haney’s next opponent after he Gamboa fight.

Hearn will have more time to negotiate the Haney vs. Russell Jr fight, and it won’t be much of a rush like they were for his November 7th date. They needed to get the negotiations done in a hurry, and they ran out of time.

Hearn tried to get Russell Jr for Haney

“Gary Russell Jr vs. Devin Haney; we sent the contract and we didn’t get it back,” said Hearn on Instagram live in why the Haney-Russell fight didn’t happen. “Hopefully, e might make that one next.

Devin could be making a big mistake in taking on Gamboa because he’s facing a guy with more power, speed, and experience than he has. Although some boxing fans rate Haney as a future star, there’s a lot of doubt about whether he’ll be another flash in the pan.

Haney didn’t win his world title, though, and that’s the problem. It was given to him by the World Boxing Council. At this point, Haney hasn’t proven anything yet, and that’s why so many people will be tuning in to see what he does against Gamboa.

Gamboa comes into the fight with a better amateur career, and he’s seen way more than the still wet behind the ears Haney.

Haney and Gamboa, 38, will be fighting at the Hard Rock Live at Seminole Hard Rock Hotel & Casino Hollywood, Florida.

Haney has been on the sidelines for the last 11 months, licking his wounds from his last title defense against Alfredo Santiago on November 9th last year.

The 21-year-old Devin didn’t know what he was getting himself into until it was too late, and he found himself in a war against the taller and surprisingly more powerful 5’11” Santiago (12-1, 4 KOs) at the Staples Center in Los Angeles, California.

Haney injured his right shoulder during the fight, but he could get through the match by boxing and being careful. Later, Haney had surgery to fix the problem, and he’s been taking it easy ever since.

Gamboa is coming into this fight with basically no pressure on him, as he’s not expected to win. He’ll be turning 39-years-old on December 23rd, and he’s in a position as the spoiler. 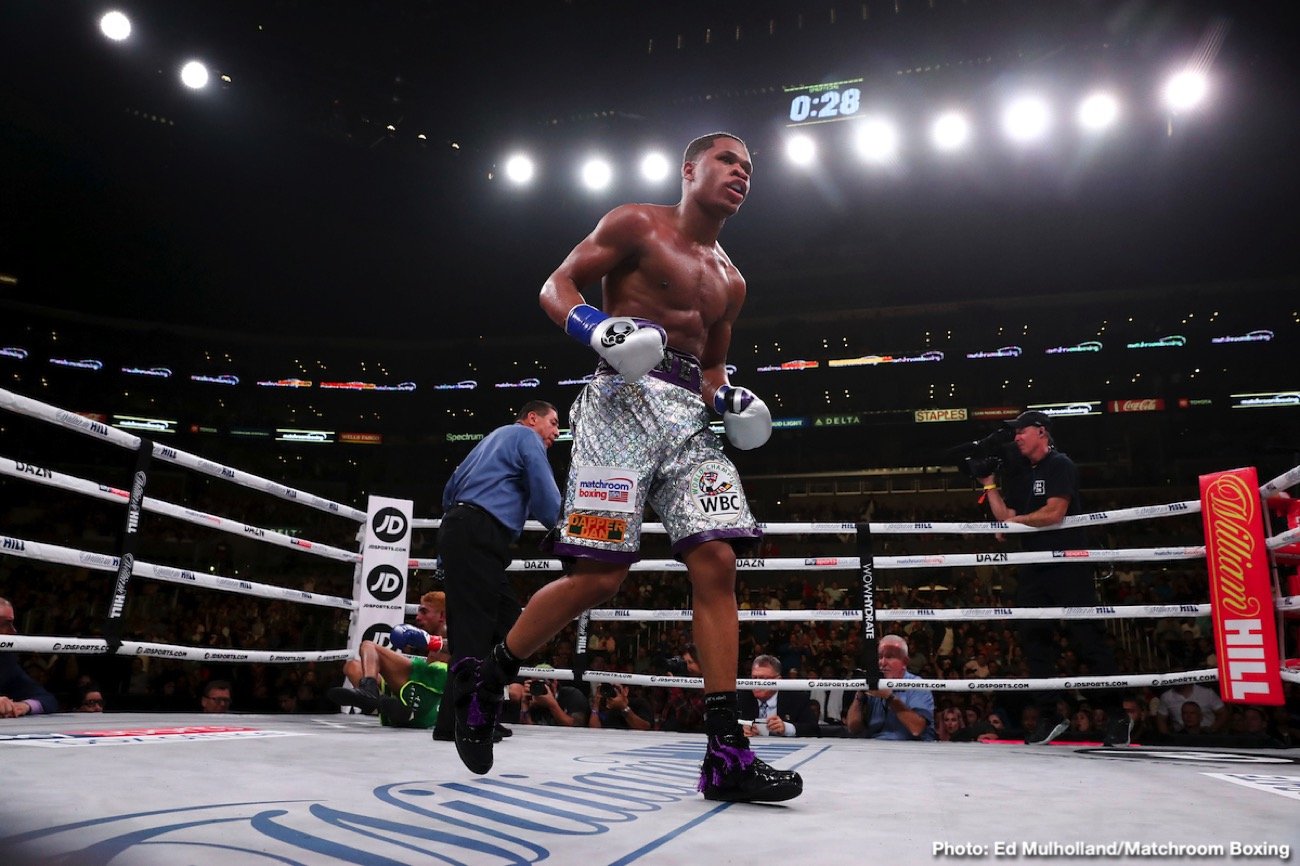 As good as Gamboa looked in his last fight against Gervonta ‘Tank’ Davis, you can call this a 50-50 toss-up with Haney. Fighting with one leg, Gamboa gave Tank huge problems after injuring his Achilles in the 2nd round.

“Yuriokis Gamboa is a dangerous and experienced fighter,” said Haney. “He’s a former unified world champion, and he has been in the ring with some of the best. He hurt Terence Crawford with a big shot, so his power is not to be ignored.

“He beat Orlando Salido who beat Vasiliy Lomachenko. Less than a year ago he took Gervonta Davis into the 12th round, something no one has ever been able to do,” said Haney.

As tough a time as Gamboa gave to Tank Davis, it’s going to be hard for Haney to try and use him as an opponent to make a statement to the boxing world.

That hat Haney is counting on doing. He wants to beat Yuriokis more impressively than Tank did so that he can show the boxing public that he’s a better fighter than him. Haney is a good fighter, but fans don’t view him as being better than Tank.

The same goes for fans not seeing Haney as being better than Vasily Lomachenko or Teofimo Lopez. Those fighters are on a different level than Haney right now. That could change in the future, but as of now, those guys are seen better talents.

Haney is another Adrien Broner type off fighter, a guy that boxes a lot like Floyd Mayweather Jr but doesn’t have his hand speed or pedigree.

Devin needs to stay dialed in

Hopefully, Haney’s career doesn’t fall apart the way that Broner’s career has due to him eating his way out of the lower weight classes and winding up at welterweight, where his lack of power will be even more of a liability for him than it already is now.

The imitation Mayweather fighters are a dime a dozen, just like the many heavyweights that patterned their fighting style after Muhammad Ali. It didn’t work out for most of them, and it could be a failure for Haney with his Mayweather-esque style.

The one thing that Haney has going for him is his dedication to training. As long as he keeps working hard between fights, he’ll have less of a chance of ending up like Broner.

Even if Haney doesn’t ever raise to be more than an email champion, he can still make the most of his talent and have a nice career. Obviously, Haney won’t be another Mayweather or Sugar Ray Leonard. He’s not of talent. He’s more of a blue-collar type fighter who will get find success with hard work.

“Gamboa is a true warrior and I’m not taking him lightly,” Haney said. “I’ve called out all the top names, and I finally got someone who will challenge me for my title.

“I intend on making a statement in this fight. My hunger is on another level. It’s time to show the world who the best fighter in boxing is and that’s me!”

It’s good that Haney is motivated to make a statement, but Gamboa has the same idea. He wants to look just as much, and he’s bringing the power.

If Haney can win this fight, he’s hoping to use it as a springboard to face the winner of the Lomachenko vs. Teofimo Lopez match. Those two are fighting this month on October 17th.


« Gervonta Davis and Leo Santa Cruz to fight on Halloween on Oct.31