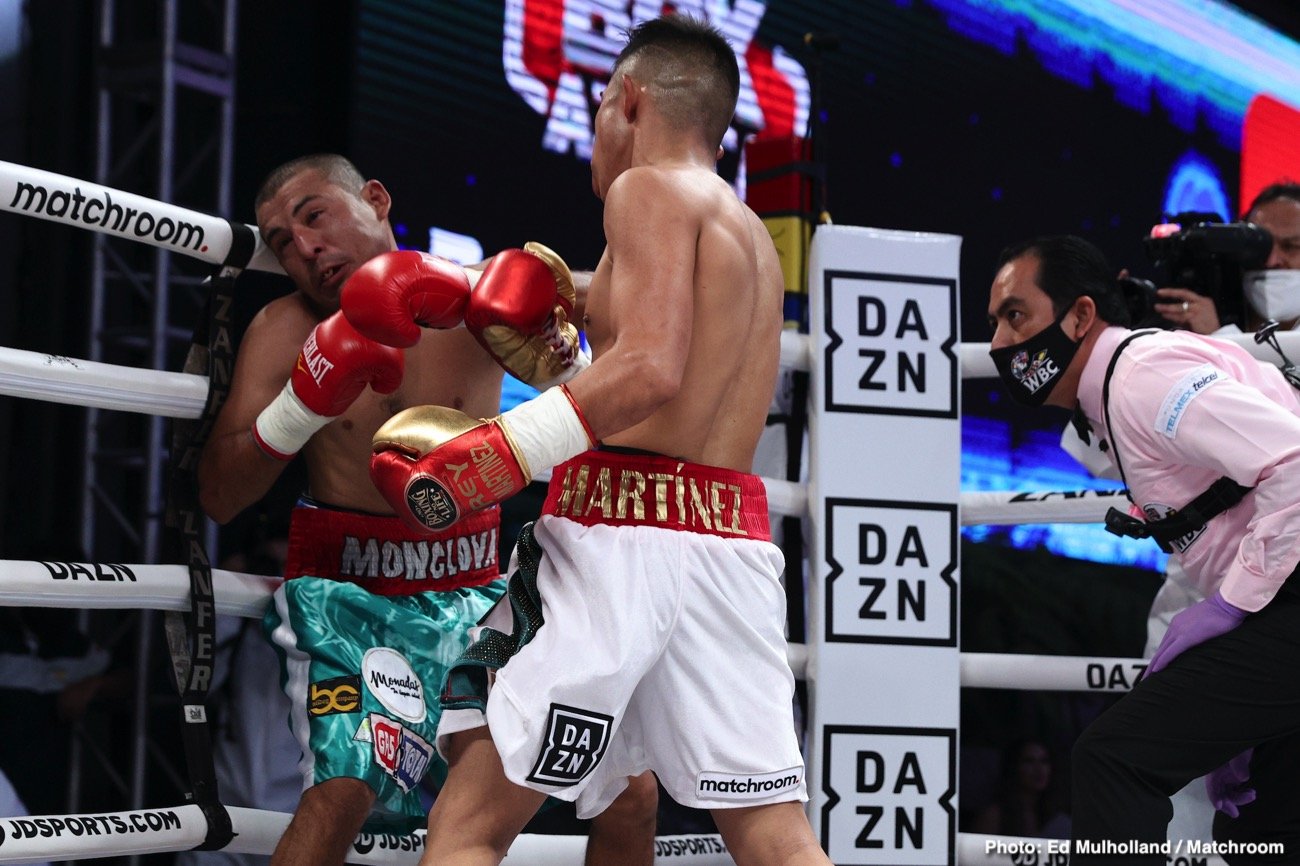 By Jim Maltzman: In a mismatch from the word go, WBC flyweight champion Julio Cesar Martinez (17-1, 13 KOs) smashed his hapless replacement opponent Moises Calleros (33-10-1, 17 KOs) in scoring a second-round knockout on Friday night on DAZN at the TV Azteca Studios in Mexico City in Mexico.

Martinez, 25, dropped Calleros in the first round with a series of hard shots put him down. In the second round, Martinez hurt Calleros with a left hook right off the bat. Martinez then unloaded on the hurt Calleros, who looked confused and helpless. The beating continued with Martinez unloading on Calleros until the referee stopped the fight.

The official time of the stoppage was at 2:42 of round two. Calleros was lucky to make it out of the first round, as Martinez was teeing off on him with hooks to the body and head. Calleros didn’t know whether he was coming or going because he was getting beaten up, and he had nothing to offer back other than an occasional limp jab.

At the start of the second round, Martinez ran out to the center of the ring and clocked Calleros with a huge shot that had looked dazed. From that point, it was a massacre with Martinez hitting Calleros with everything and not missing a punch.

The few erratic shots were thrown by Calleros during the second round were easily picked off by Martinez. Calleros didn’t have much variation to his offense to trouble Martinez at all, and his lack of power compounded his problems.

Calleros did land a nice right hand in the second, but Martinez wasn’t going to be slowed. He ignored and continued to batter Calloeros with massive shots to the head.

When the referee finally did step in, Calleros was out on his feet and seconds away from going down. If not for the referee, Calleros wouldn’t have stayed much longer.

In hindsight, the 31-year-old Calleros used the wrong approach in the fight. Instead of focusing on his weak jab, which was never going to hold off the wrecking ball Martinez, he should have focused on power shots. That would have been Calleros’ only chance of winning. He didn’t have a good enough jab to hold Martinez off.

It’s likely that Calleros and his team watched Martinez’s recent fight against Jay Harris from last February and noticed that the British fighter had a lot of success with his jab. Harris had a much better jab than Calleros, and he had a lot more going for him than just that.

Martinez would have knocked out Harris if he fought as aggressive as he did tonight. He was wasting a lot of time trying to box Harris, which played into the British fighter’s strengths.