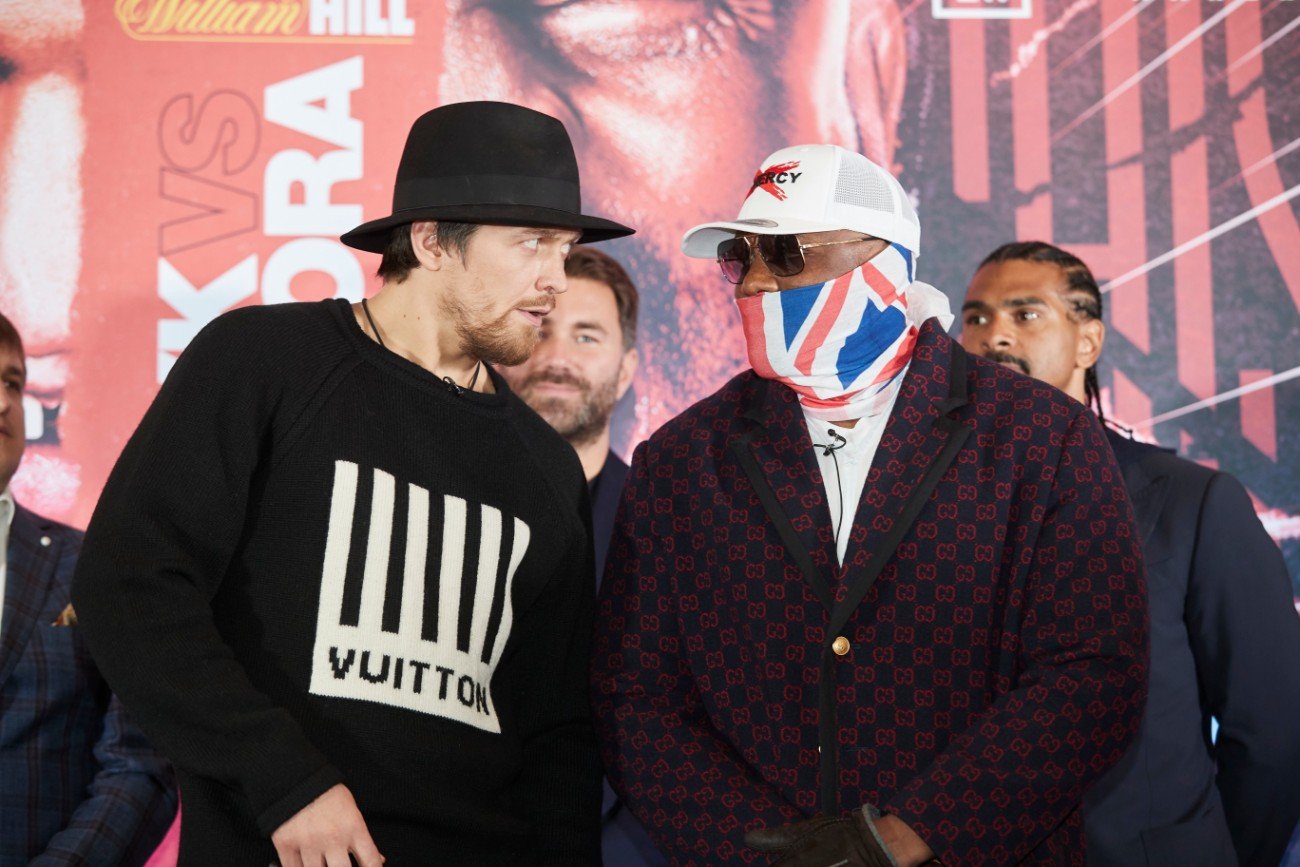 By Charles Brun:  Oleksandr Usyk sent a message to British heavyweight Dereck Chisora on Saturday in saying hello to him while on a kayak. Usyk (17-0, 13 KOs) is wanting to let Chisora know that he’s still focused on their fight, which is expected to take place before the end of the year.

Matchroom Boxing promoter Eddie Hearn still doesn’t have a date set for the Usyk vs. Chisora fight, but it’s one that will happen in 2020.

For Chisora (32-9, 23 KOs), it could be his last chance to attempt to earn a title shot against IBF/WBA/WBO heavyweight champion Anthony Joshua.

If Chisora, 36, can beat Usyk, the WBO mandatory, he would be the one that would be challenging Joshua (23-1, 21 KOs) or Tyson Fury for the World Boxing Organization heavyweight title.

Usyk said on social media, “Dereck, I send you hello. Dereck.” It was funny to watch, bit classic Usyk, who seems to be having more fun playing around with the lead up to his contest with Chisora than he has against any other opponent he’s faced during his seven-year professional career.

In the past, Chisora has been known for his attempts to intimidate his opposition. We saw him slap Vitali Klitschko in the face during a face, kiss another fighter on the mouth, and throw tables.

But with Usyk, Chisora hasn’t done any of those antics. Has Dereck mellowed out in old age, or does he understand those tactics probably won’t work against the 2012 Olympic gold medalist?

Usyk is the favorite, but Chisora has a real shot at winning this fight. In Usyk’s first fight at heavyweight last October, he didn’t look out of the world good in beating Chazz Witherspoon.

That’s an understatement. The former undisputed cruiserweight champion Usyk looked horrible in struggling to deal with the pressure from the 38-year-old Witherspoon, who was fighting for just the third time in the last four years.

Is Chisora too big for Oleksandr?

There a massive size difference between Chisora and the former undisputed cruiserweight champion Usyk, and that’s not something that will change. The combination of Chisora’s size, power, and overall experience at heavyweight may be too much for Usyk to deal with. 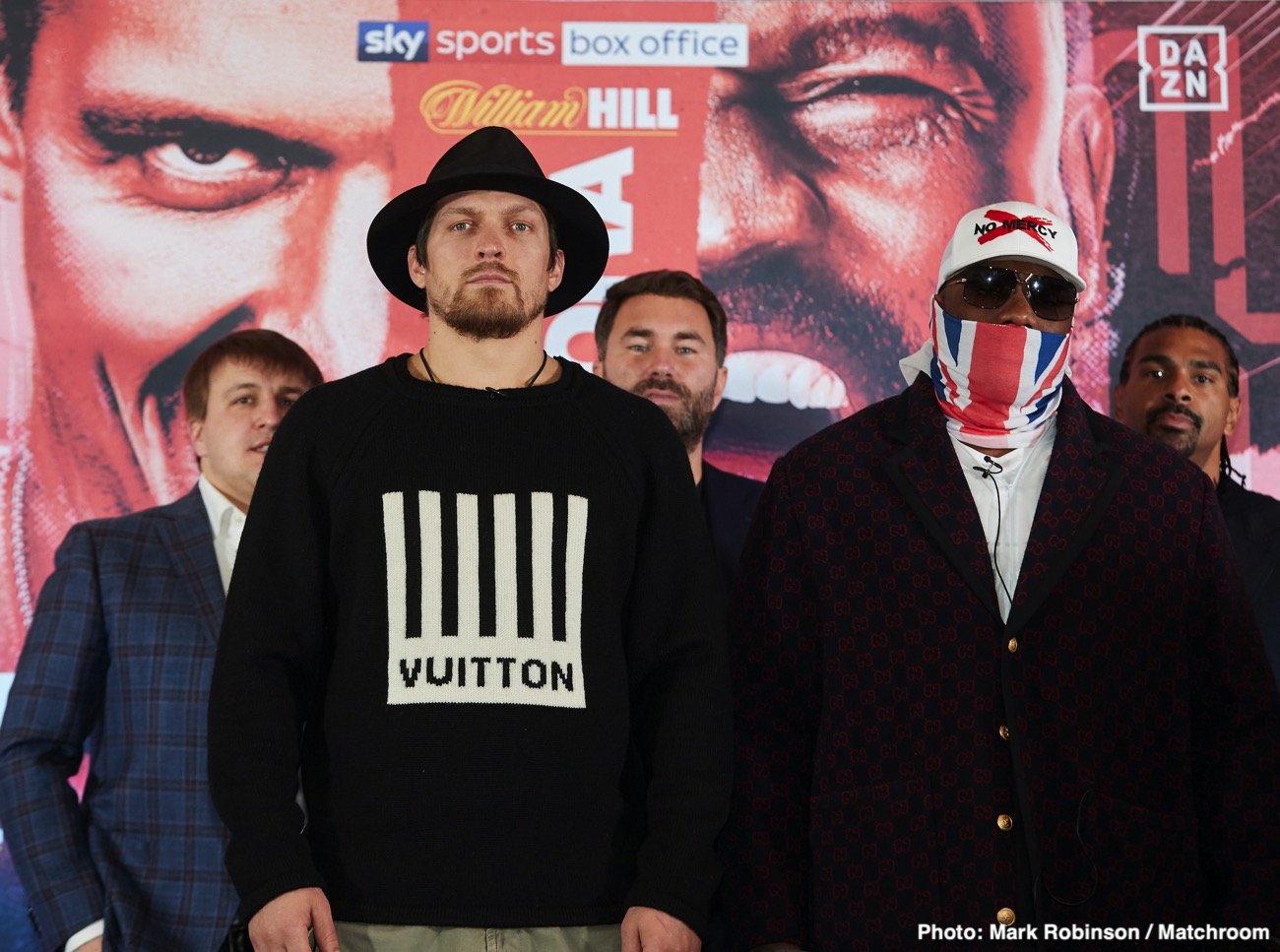 Tony Bellew’s idea of creating a super cruiserweight division with a ceiling of 220 lbs would be perfect for Usyk, as he weighed only 215 pounds for his debut at heavyweight. That’s what he was rehydrating to when he fought at cruiserweight.

To have a small heavyweight with little in the way of punching power like Usyk taking on a hard puncher like Chisora, it could be problematic for the Ukrainian fighter.

Usyk was installed as the #1 contender with the WBO at heavyweight without needing to earn the spot, as he was given the position based on him holding the cruiserweight title with the organization.

It’s in the WBO’s rules to allow their champions to be given the #1 mandatory position in the division above them without them needing to earn the ranking.

There’s a lot of boxing fans that don’t like the idea that Usyk has been given the top ranking with the WBO at heavyweight, but those are the rules.

It’s a real gift for Chisora that Usyk has selected him to use as his warm-up opponent to get him ready for a title shot in 2021 against WBO champion Joshua.

Usyk didn’t have to take the fight with Chisora. He could have fought another Witherspoon level fighter at heavyweight, and no one would have complained, least of all promoter Eddie Hearn. He’s the promoter for Usyk and Chisora.

By Usyk facing Chisora, it’s an in house fight for Hearn, and it works out well for him. Even if Usyk loses the battle, it’s still suitable for Matchroom because Joshua vs. Chisora would do well in the UK in terms of pay-per-view buys on Sky Box Office and ticket sales.

« Teofimo Lopez: I’m going to do damage to Vasily Lomachenko

Is Spence waiting until Crawford is old before fighting him? »