Murat Gassiev to face Kevin Johnson on Oct.31 in Russia

By Kenneth Friedman: Former IBF/WBA cruiserweight champion Murat Gassiev will be returning to the ring after a two-year layoff to face former world title challenger Kevin ‘Kingpin’ Johnson in a scheduled 12-round bout next month on October 31 in Russia.

Gassiev has been dealing with injuries, which have kept him out of the ring longer than expected.

The 26-year-old Gassiev (26-1, 19 KOs) and 41-year-old Johnson (35-17-1, 19 KOs) will be battling for the vacant World Boxing Association International Heavyweight title at a still to be determined venue.

Gassiev hasn’t fought since losing to WBC/WBO cruiserweight champion Oleksandr Usyk in the final of the World Boxing Super Series [WBSS] tournament on July 21, in Moscow, Russia. Usyk out-boxed Gassiev by jabbing the entire fight, which effectively bottled up his offense.

The victory for Usyk created a blueprint in how to defeat Gassiev by forcing him to defend and not let his hands go. We’d already seen Denis Lebedev do that to Gassiev in 2016. Still, Usyk used a different twist by focusing on throwing frequent jabs rather than power punches was stuck waiting all night for Usyk to stop throwing before he’d throw an occasional punch.

Johnson is a good opponent for Gassiev to fight for his first fight back, as he’s got a lot of experience against elite-level fighters. Despite ‘Kingpin’ Johnson having lost nine out of his last twelve fights, he’s coming off an impressive seventh-round knockout over former IBF cruiserweight champion Yoan Pablo Hernandez (29-2, 14 KOs) last month on August 22 in Germany.

Hernandez hadn’t fought in six years since 2014, and he didn’t have the gas tank to handle the pace that Kevin set in that contest.

Kevin Johnson has a good chance of winning

You can’t rule out another big upset for Johnson against Gassiev, as ‘Kingpin’ has a great jab, and he’s going to be looking to control the fight the same way that Usyk did. If Gassiev can’t stay busy against Johson, he’ll get outpointed and embarrassed.

If Gassiev loses or struggles to defeat Kingpin on October 31, he’s going to need to decide whether it’s worth it to carry on in the sport. Coming back fro a two-year layoff is brutal for any fighter, particularly one with so many holes in his game as Gassiev has.

The Russian KO artist Gassiev doesn’t throw enough punches to dominate his opposition, and he always seems to need a knockout to win when facing quality opposition.

The cruiserweight division better for Murat

Moving up to heavyweight could be a mistake for the 6’3 1/2″ Gassiev because the top talents in the division can do many the same things that Usyk did in beating him. The world champions Tyson Fury and Anthony Joshua have excellent jabs, and they can move the ring to stymie heavy punchers like Gassiev.

When Gassiev was fighting at cruiserweight, his power was so good that it helped hide his glaring defects with his offense. His power was better most of the fighters in the division, which helped him succeed without throwing a lot of punches the way regular fighters do.

Now that Gassiev is moving up to heavyweight, his power isn’t going to be nearly as devastating, and he’ll be stuck with the same flaws in his game that he had when he was fighting at cruiserweight. 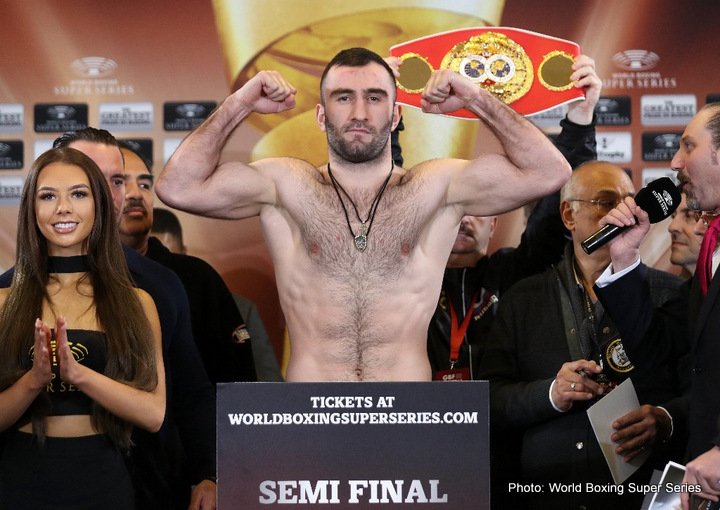 If Gassiev has problems beating Kevin Johnson, then he should see the writing on the wall and perhaps return to the cruiserweight division if possible. It won’t be easy for Gassiev to make the 200 lb limit, but he needs to try.

If the WBC creates a super cruiserweight division, that would be ideal for Gassiev. He would be able to fight against guys that aren’t as huge as the heavyweights, and there would likely be less talented fighters in the division for him to compete against.

Regis Prograis vs. Juan Heraldez on Oct.24 on Tank vs. Santa Cruz card »