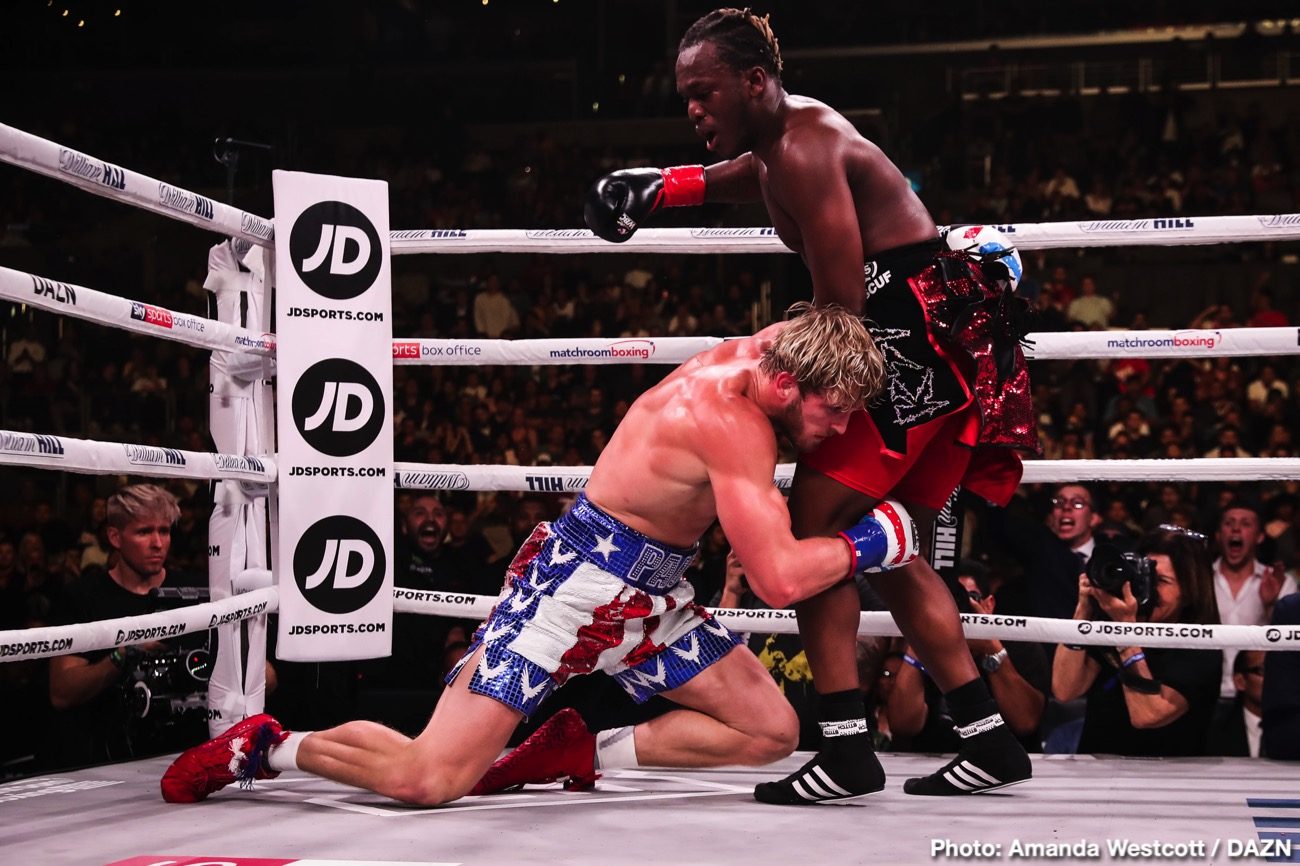 By Sean Jones: Youtube celebrity Logan Paul isn’t denying that he’ll be facing unbeaten former multi-world champion boxer Floyd Mayweather Jr next. The reports are that the 25-year-old Paul (0-1), who looked terrible in his pro debut in losing to KSI, has signed a contract with the 43-year-old Mayweather (50-0, 27 KOs).

Floyd would need to bulk up to face the cruiserweight Paul, but that shouldn’t be a problem. Paul’s stamina is, in a word, horrible. He was gasping after one round in his recent loss to KSI on November 9th.

On the other hand, Logan’s brother Jake Paul does have the talent and crushing power with either hand. He’s not a boxer either, but he can punch like no tomorrow, and it’s not surprising that Mayweather didn’t select him to fight.

With his power, Jake would have a decent chance of beating Mayweather, but not Logan, who looks out of breath even when shadow-boxing. If this fight goes down, hopefully, they do an excellent medical checkup on Logan to make sure his cardio system is operating OK.

With the doors closed for Mayweather to continue to hand-pick UFC stars for easy paydays, he’s now turned his attention to the YouTubers. One can only hope that Mayweather’s fight against Paul isn’t the beginning of other battles between him and other Youtube celebrities. 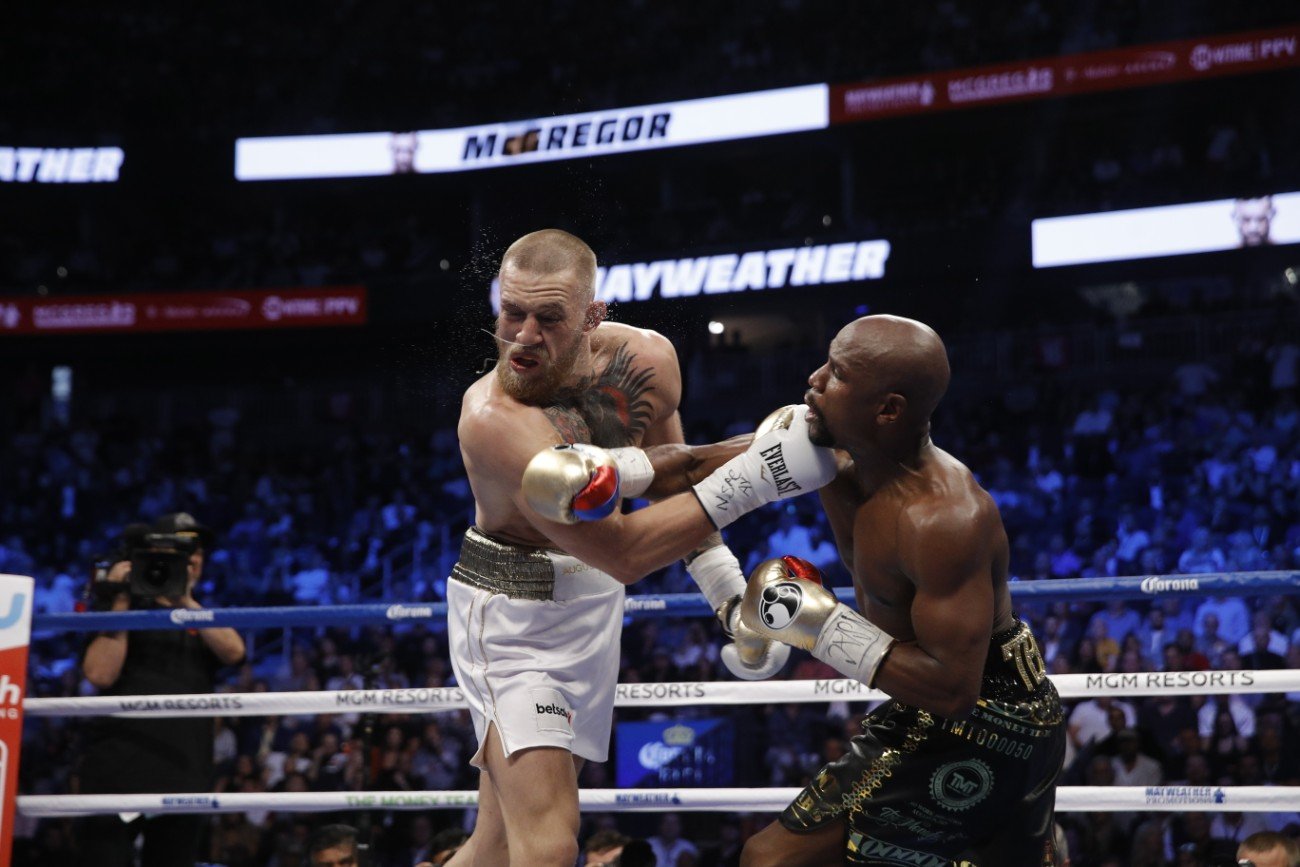 Unless Mayweather is handicapping himself somehow, it’s grossly unfair for him to fight a guy that is just a celebrity and has no background in the sport of Boxing.

There’s no word yet how much fans will be asked to pay to watch Mayweather vs. Logan, but it wouldn’t be a surprise if it goes for $99.95 per household. Tha’s how much Mayweather’s fight against ex-UFC star Conor McGregor sold for in 2017.

It’s scary how bad Logan’s stamina is, and it might be a mistake for him to fight someone like Mayweather. In Logan’s boxing debut last November, he was soundly beaten by KSI by a six-round decision. Logan’s gas tank was running on empty after one round! It was pathetic.

From the second round on, KSI, another Youtube celebrity, did what he pleased. If KSI weren’t so wild an amateurish with his shots, he would have knocked Paul out in the second round because he was there for the taking.

When approached by TMZ this week to comment on the Mayweather rumors, Paul said, “I can’t talk about that s***.” The fact that Paul didn’t deny the truth of the stories is telling.

The apparent reason why Mayweather would want to fight the hopelessly over-matched Logan Paul is apparent. The Youtuber is incredibly popular with a following of millions of fans, who flock to watch him on Youtube.

While many of those fans likely don’t follow Boxing, they would still be interested in paying to see him fight Mayweather. In other words, they would be considered casuals and would bring in money for Mayweather and Logan for a fight that’ll be a worse slaughter than the Mayweather-Tenshin exhibition match.

While this is an incredibly off-putting fight, it fits in with the way Mayweather has been going about keeping his boxing career alive.

In 2017, Mayweather fought former UFC star Conor McGregor in a fight sanctioned as a professional fight by Nevada.

McGregor had never fought before in a boxing match, and he had no amateur background. Nevada still sanctioned the fight. IN 2018, Mayweather fought little featherweight kickboxer Tenshin Nasukawa and wiped him out in one round in an exhibition match. In terms of competitiveness, it was a horrible match-up.

Mayweather vs. Logan Paul = how low can you go?

It’s hard to tell whether a fight between Mayweather and Logan Paul is terrible for Boxing because it’s a match that will garner a lot of attention in the media. For a lot of people that don’t follow Boxing, they’ll take notice of the sport. Whether they’ll be won over by what they see and become diehard or casual fans is difficult to predict.

It would help significantly if the Mayweather-Paul fight has a degree of competitiveness about it. If Paul can connect with one of his shots before he gasses out after the first round, he might hurt Mayweather.

Unfortunately, Logan didn’t show any signs of having punching power last November against KSI. Logan looked tired after the first 60 seconds of the bout, which was odd because he looked like he was in great shape. 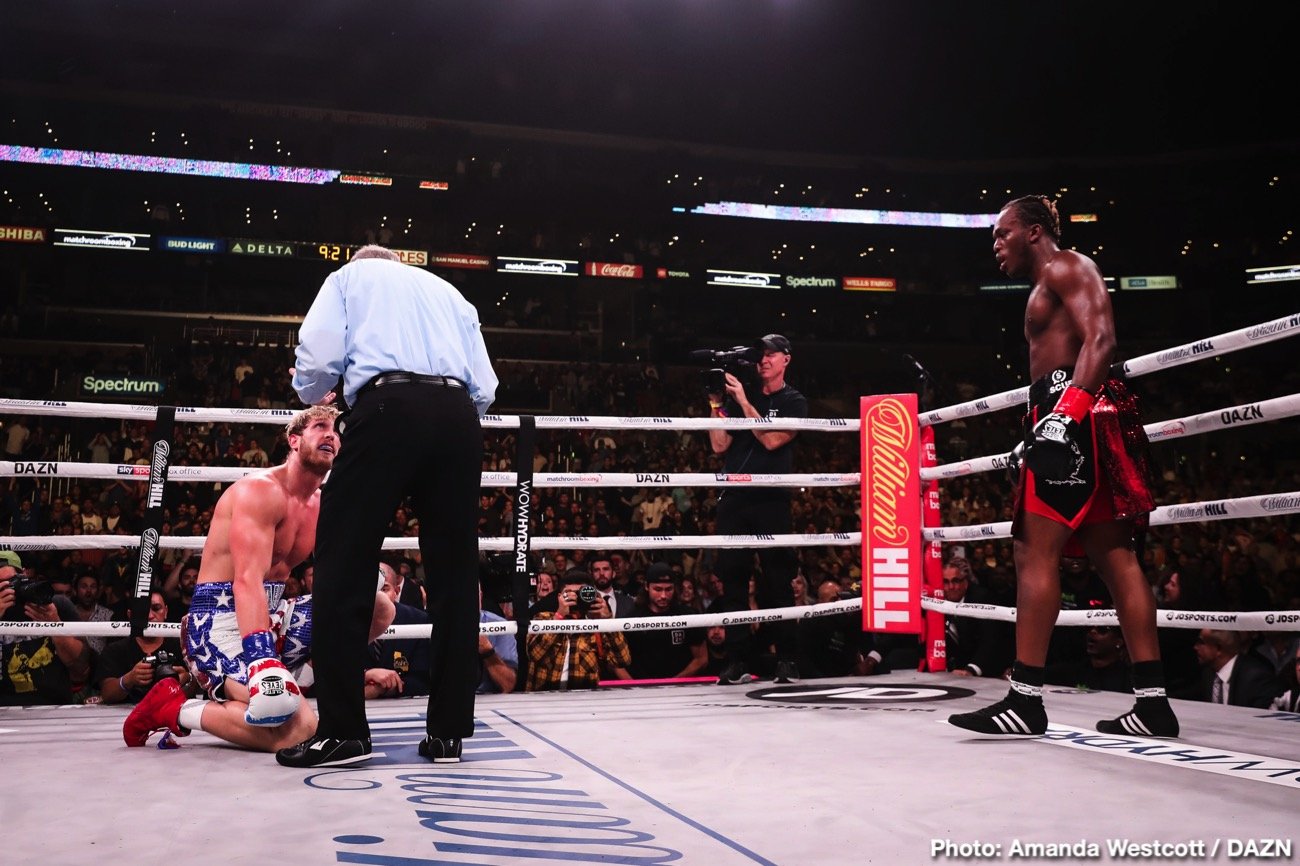 If Mayweather obliterates Logan in one round as he did against little Tenshin in 2018, the fans paid to see the mismatch on pay-per-view will be turned off entirely, and will never order another boxing match.

UFC president Dana White said this week that “boxing is in trouble,” and the reason he sees it in that position is that there are too many fights meant to make a quick buck without them being competitive.

The fans fall for it by ordering the fight on PPV, and then end up disappointed when it’s not entertaining or competitive. The promoters and the A-level fighters are looking to make easy money against guys they know that have no shot at beating them.

The A-side guys win, and the fans lose. But ultimately, the sport is hurt because the fans eventually lose interest after being ripped off by paying to see mismatches.

“Every boxing match is a ‘going out of business’ sale. ‘Let’s get as much money as we can from these people and get the f*** out of town’. That’s not how you run a business and it’s not how you build the sport.”

White sums the problems with Boxing well, and you can’t deny that’s the problem the sport is having right now. Mayweather vs. Logan Paul is an excellent example of a boxing match that is ‘going out for business sale.’ It’s not meant to be competitive.

The fight is targeted at casual fans, who will have no clue how much of a mismatch this fight will end up being.


« Canelo Alvarez vs. Gennadiy Golovkin III: Will this fight happen in 2021?

Teofimo Lopez: I don’t want to hear about Lomachenko again after this fight »