Josh Taylor expects Apinun Khongsong to give him tough fight 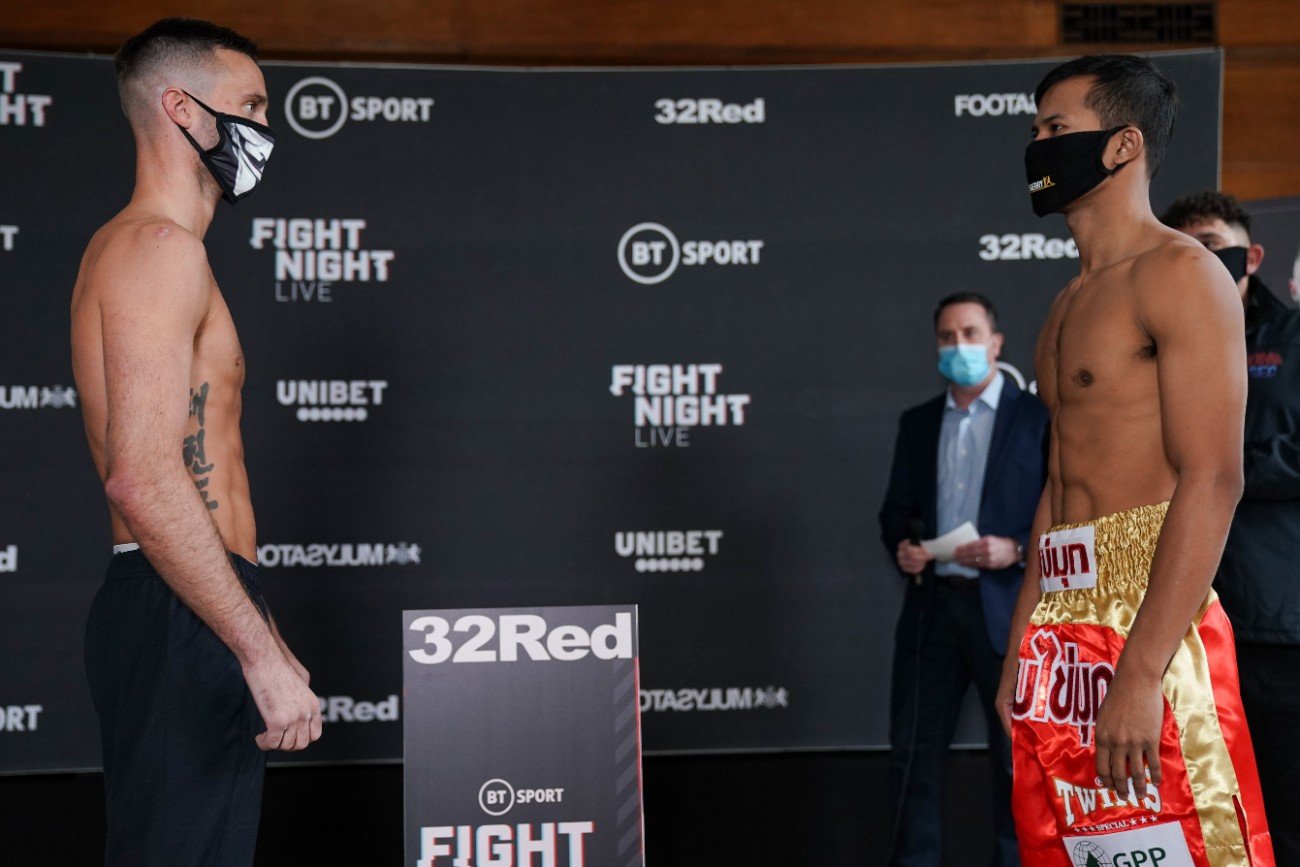 By Matt Lieberman: Josh Tayor isn’t overlooking his IBF mandatory challenger Apinun Khongsong for tonight’s Top Rank promoted 12-round match on ESPN+ at York Hall at Bethnal Green in London, UK. IBF/WBA light-welterweight champion Taylor (16-0, 12 KOs) and Khongsong (16-0, 13 KOs) are expected to go to war in the center of the ring tonight.

Not much is known about the 24-year-old Khongsong, seeing that he’s been fighting his entire four-year career in his home country of Thailand. His opposition has been obscure guys for the most part, but his power is legitimate.

Khongsong hasn’t had a chance to test his skills against world-level opposition, unfortunately, but tonight we’ll see how he does against one of the best at 140.

If Taylor, 29, wins this fight, he’ll face WBC/WBO light-welterweight champion Jose Ramirez next in 2021. Ramirez (28-0, 17 KOs) has already done his part to get to the undisputed match by defeating his WBC mandatory Viktor Postol by a controversial 12 round decision last August.

Ramirez looked terrible in winning the fight, but that’s becoming a common occurrence for him. He also looked poor last year in beating Jose Zepeda by a questionable 12 round decision. Some boxing fans are already saying Ramirez is the new Canelo with how he’s been winning controversial decisions. 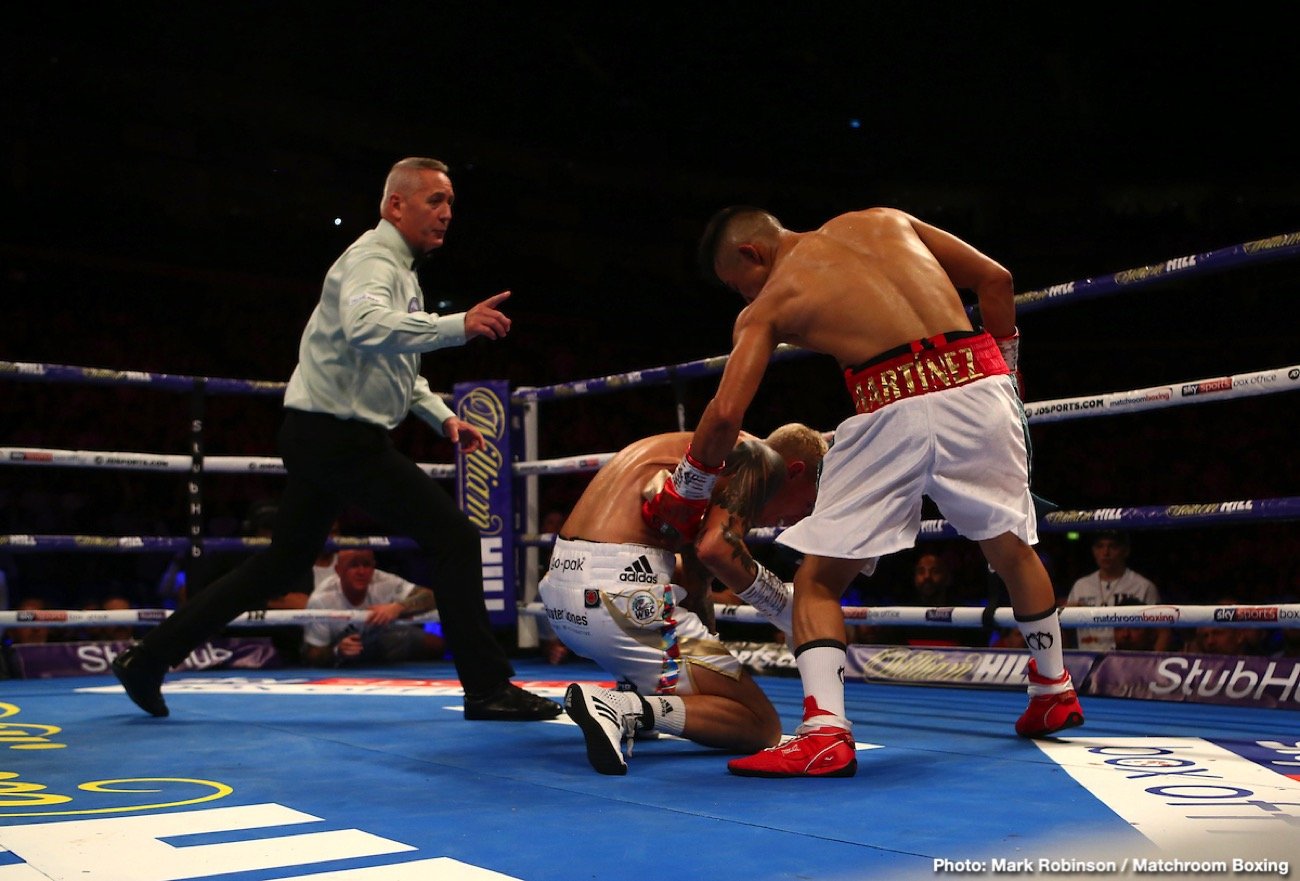 In other fights on the card, former WBC flyweight champion Charlie Edwards (15-1, 6 KOs) takes on Kyle Williams (11-2, 3 KOs) in a 10-round confidence-builder at bantamweight. Edwards, 27, is fighting for the first time since being obliterated in three rounds by Julio Cesar Martinez last year in August 2019 at the O2 Arena in London, England.

In a questionable move, Edwards has moved up to bantamweight [118-lbs], which could be a step too far for Charlie. If he couldn’t handle the power of 112-pounder Julio Cesar Martinez, how is he to ever be able to deal with the power of WBC bantamweight champion Nordine Ouabaali?

Martinez went through Edwards like he was a hot knife slicing through soft butter. However, Edwards got lucky when Martinez hit him with a shot to the body after knocking him down in the third round.

The pain from the body shot caused Edwards to roll around on the canvas in seeming agony. The referee waited to see if Edwards would get up to continue fighting, but when it was clear that he’d had enough for the night, the fight was topped. The contest was then subsequently ruled a no-contest due to

Edwards weighed in at 117.5 lbs for last Friday’s weigh-in. His opponent Williams came in at 117.25 lbs. Edwards cannot afford to lose this fight if he wants to keep his career afloat, but there’s very little chance of that. Williams being brought in as a sacrificial lamb in hopes of boosting Edwards’ confidence.

“It’s going to be a very good fight. I’m prepared or 12 rounds,” said Taylor to IFL TV about his fight against Khongsong on Saturday. “Everybody is looking past him.

“They’re talking about [Jose] Ramirez and moving up to 147, and this carrying on and fighting the winner of Lomachenko and  Lopez. I’ve got to get through Saturday first.

“I’m not the only one that is thinking about Saturday. We’re taking him very seriously. He’s standing in my way to where I want to go to take these big fights. If I slip up here, that goal is gone for the foreseeable future anyway.

“He is very dangerous and is the same height as me. He carries power in both hands, and he’s knocked some of them out with both hands. He’s got an offbeat type of rhythm, and I hard to time.

“He’ll be tough. Thai fighters are known for their durability and toughness. It’s a very tough nation of fighters over there. It’s not going to be an easy one to knock over, but I do believe I will.

‘I do believe I’ve got too much experience and seen too many styles, and I’ve been around the block a few times in my short career.

“So I do believe I’ve got enough to beat him. I think I’ll put on a strong performance here because I’m really focused,” Taylor said.

With the power that Khongsong possesses in both hands, Taylor has got to take him seriously tonight. The Thailand fighter is the hardest puncher that Taylor has fought, and it could be difficult for him to handle his shots.

“Boxing fans are fickle,” Taylor continued. “‘What about that one shot you got hit with, and this and that and you’ll get chinned in your next fight.’ You take it with a pinch of salt.

“I don’t care how people see me. As long as I get that win on Saturday, that’s all that matters. Whether I look good doing it, bad doing it, or taking a shot, who cares?

Taylor was reeling in the second half of his last match against former WBA 140-lb champion Regis Prograis last October. Josh might have lost that fight if Regis didn’t make the calculated error of staying on the inside for too long.

When Prograis moved to the outside in rounds seven through twelve, he took over the fight and finished strong against the tired-looking Taylor. Khongsong and his training team have likely scouted Taylor well, and they’re not going to make the same rookie mistakes that Prograis did by staying in close for the first six rounds.

If Taylor is going to win tonight, he’s going to have to beat Khongsong from range and throw longer punches. That’s Taylor’s weakness, though, because he doesn’t fight well from the outside. His whole game is to get in close and pound away at the body and head of his opponents. You can say that Taylor is an old school Rocky Marciano type of fighter. 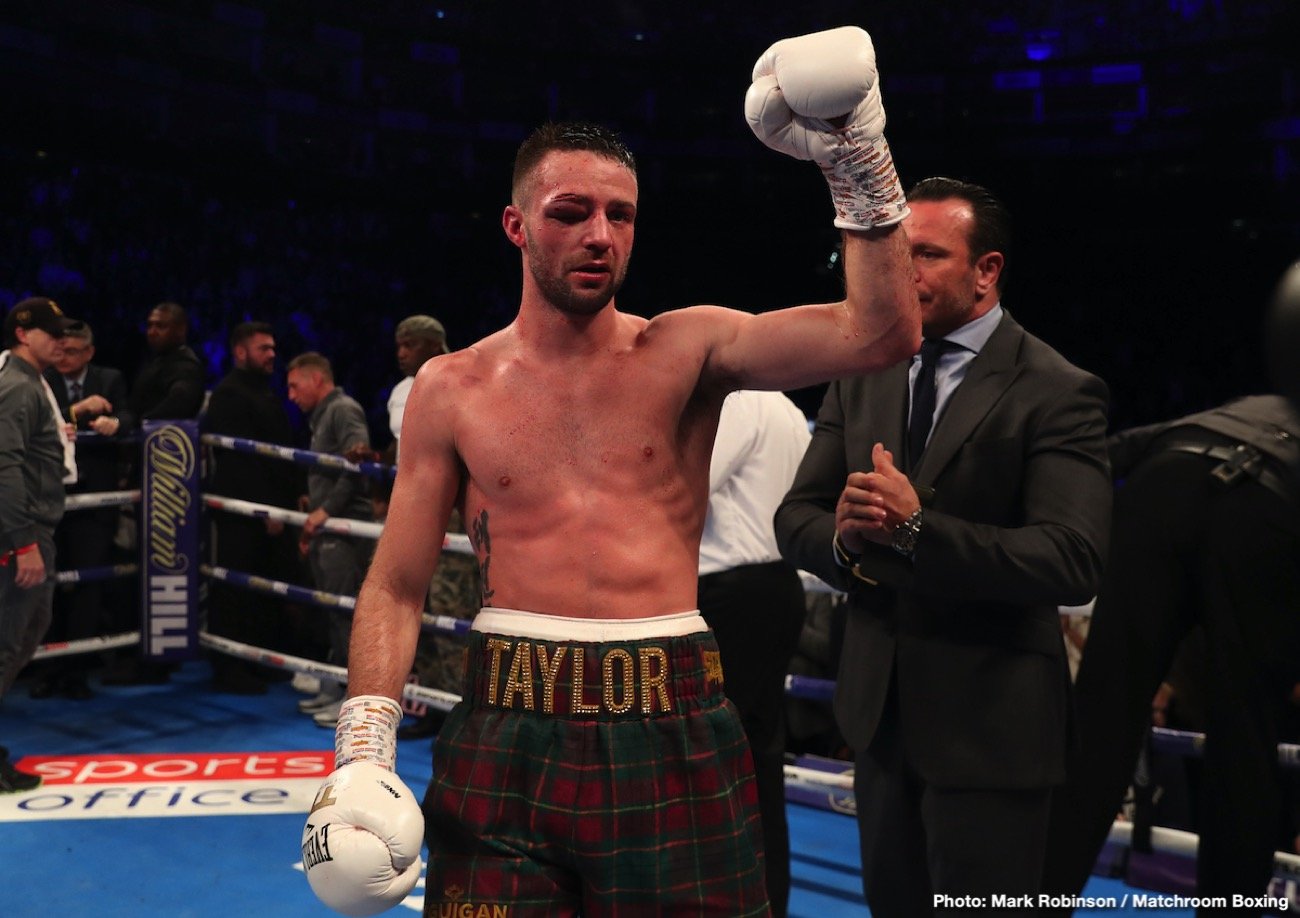 There aren’t too many fighters like Marciano anymore, certainly not at 140, which is why Taylor has been doing so well.

Taylor vows to be more polished

“I’m more of a complete all-around type of fighter. No different or anything like that. I believe what I’ve been doing has been working, so why am I changing it for?

“I’m a unified Champion doing what I’ve done, so why am I going to change it for? It’s about being a bit more polished all-around and sharpening up on the skills that I was neglecting before. So you’ll see more of a complete performance, I think,” said Josh.

Taylor’s new emphasis on being more “polished” for the Khongsong contest is a clear sign that he’s worried about taking punishment from the hard-hitting Kostya Tszyu-type puncher.

The 2012 Olympian Taylor doesn’t want to get hit too often by Khongsong because this guy hits like a ton of bricks, and he’ll cause facial damage to the Scottish fighter if he lands with any regularity. 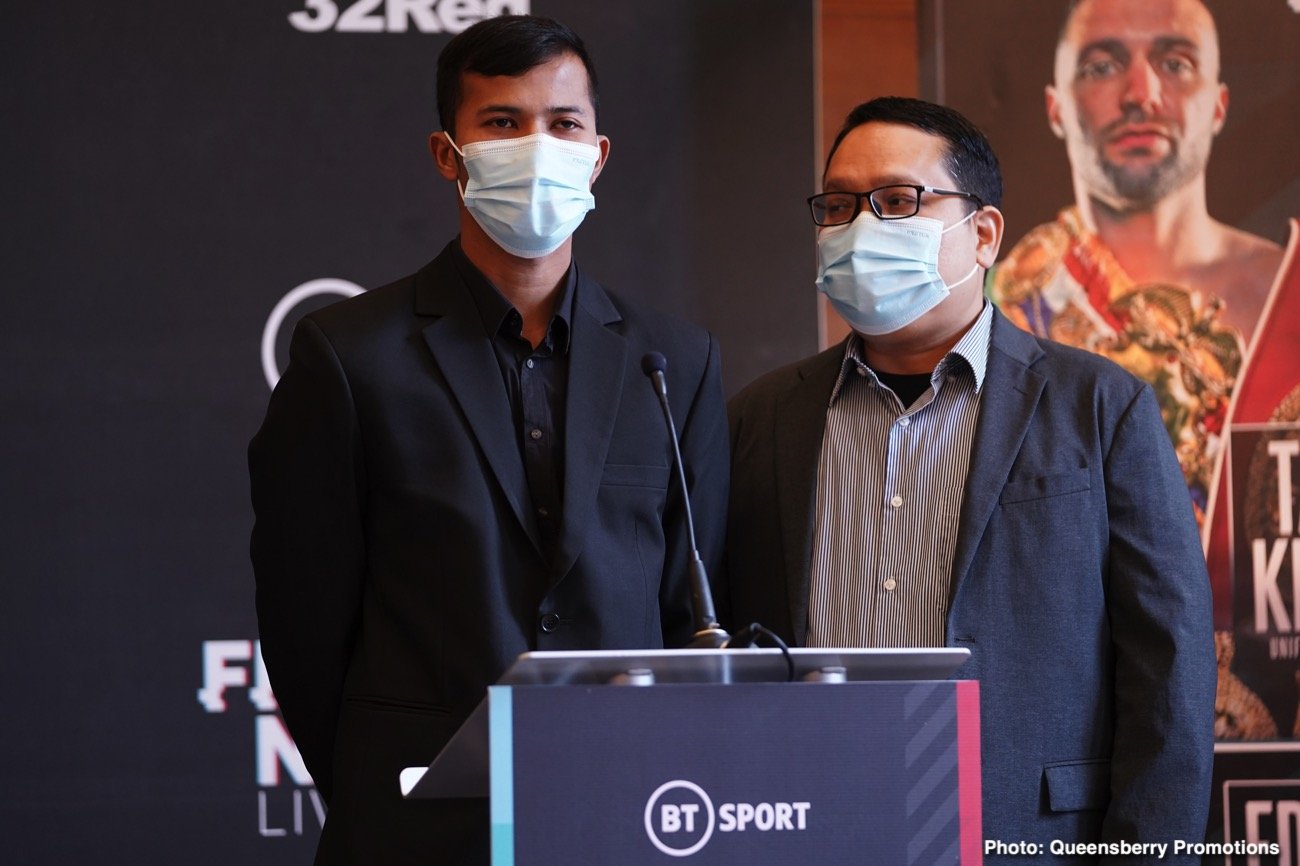 Khongsong won’t have to deal with pro-Taylor fans

“He won’t have the animosity and the intensity of the crowd a the Hydro [in Glasgow,” said Taylor about Khongsong not having to deal with the crowd on Saturday night due to the fight being held without fans.

“The atmosphere at the Hydro, it’s like everyone is on top of you, and that can be daunting for fighters. He won’t have that, but it’ll be more intense. They can also use that energy as well to keep them fired up. So it kind of works on my advantage as well.

“My first choice wouldn’t have been to box in front of no fans, but I want t keep my career going and the momentum going,” said Taylor. “Boxing is all about momentum, so I want to keep it rolling. I don’t want to be sitting on the bench for too long, getting stale. It’s keeping my career on the go, which is good,” said Taylor.

Taylor will have to be on his guard the entire fight if he wants to keep from getting busted up as we saw in his last performance against Prograis. Josh looked terrible by the championship rounds, and that was one of the reasons why he faded. 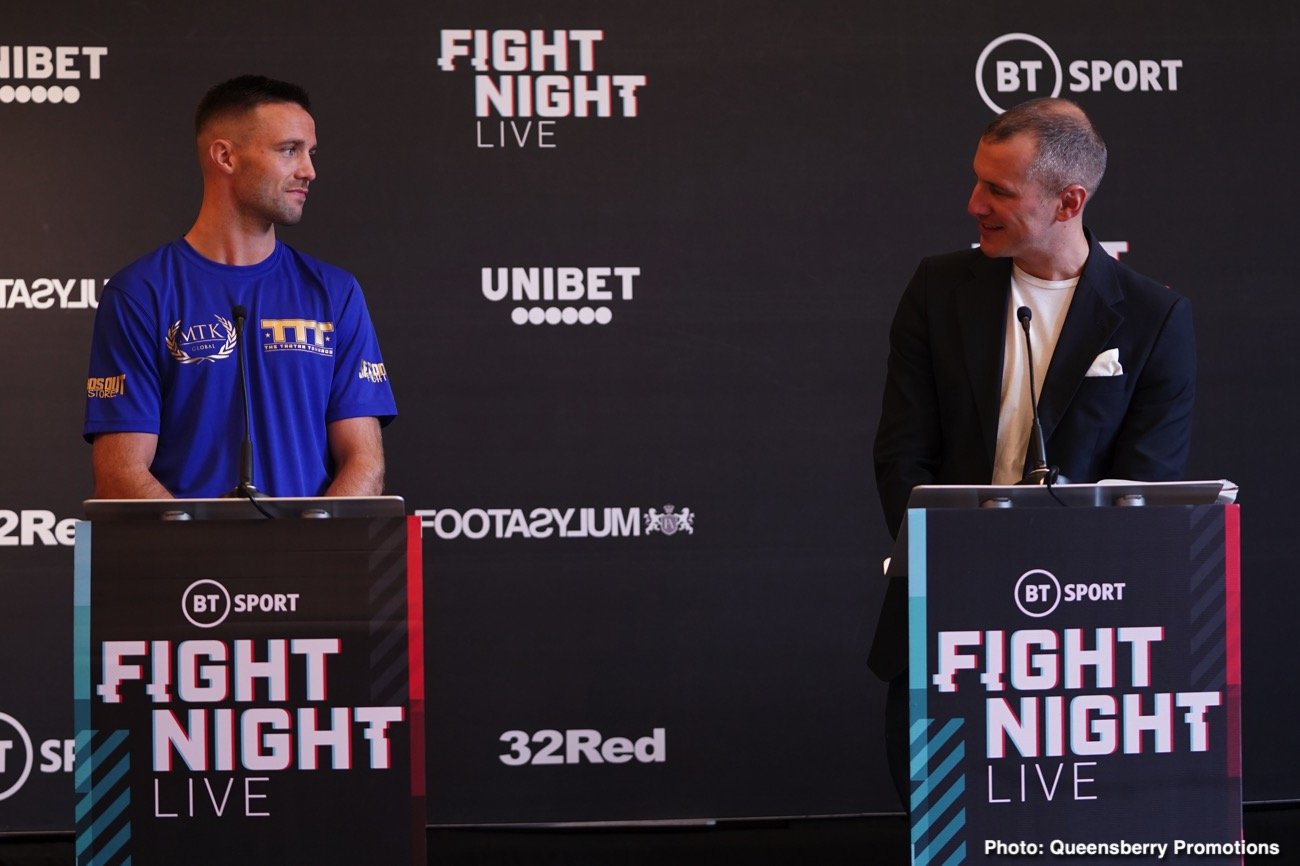 Taylor’s right eye was almost closed by the 10th round, and he was getting worked over by Prograis’ long-range power shots. Prograis beat Taylor to the punch from the outside, and it stopped being competitive in the last three rounds. Taylor couldn’t deal with Prograis’ sharp punches and his faster hands.

David Lemieux vs Francy Ntetu on October 10 in Shawinigan, Quebec »