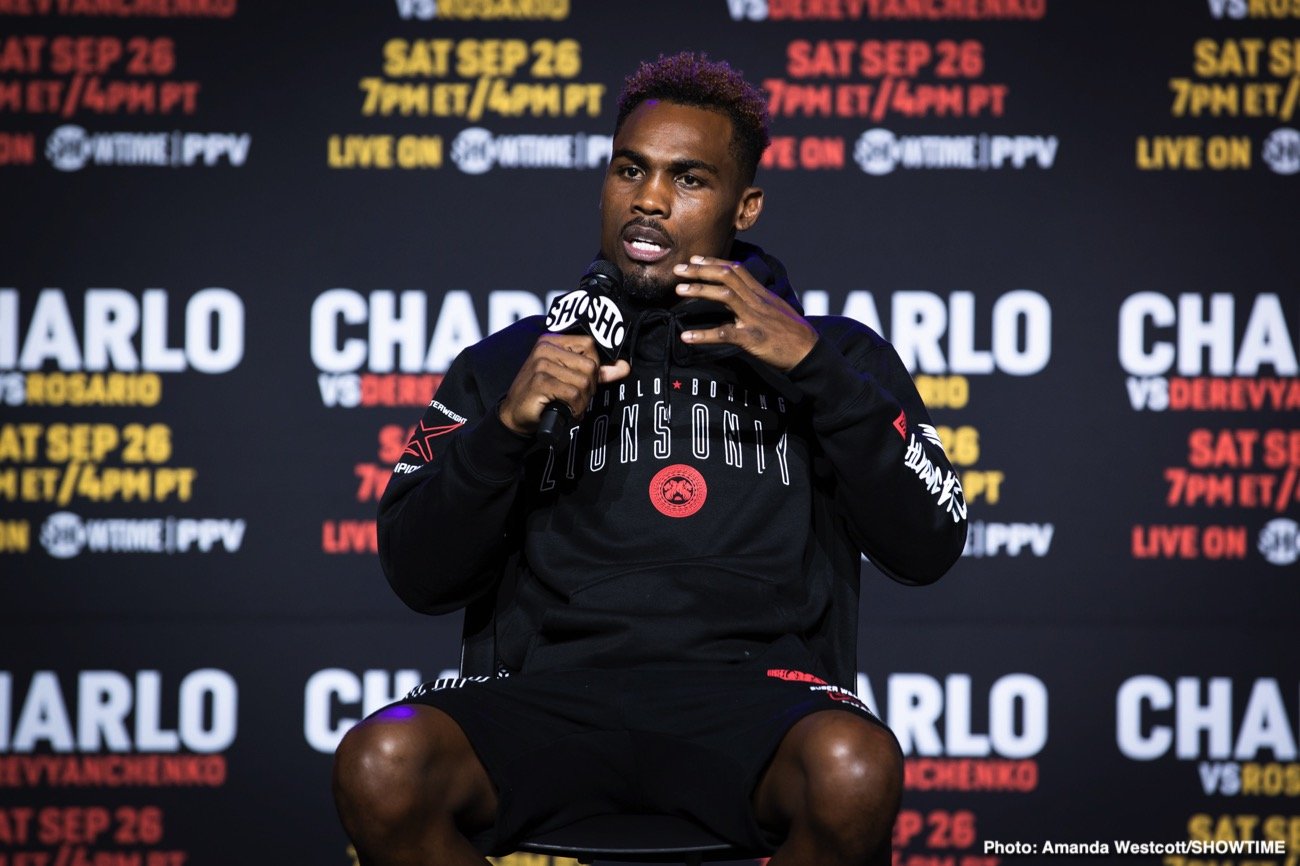 By Sean Jones: WBC junior middleweight champion Jermell Charlo (33-1, 17 KOs) is taking a significant risk this Saturday in battling knockout artist IBF/WBA champ Jeison Rosario (20-1-1, 14 KOs) at the Mohegan Sun Casino in Uncasville, Connecticut. Both Charlo brothers will be in action in this doubleheader on Saturday.

Rosario, 24, has an excellent chance of beating Charlo if he can get through the first four rounds. Charlo is easy to hit and likes to slug. At 30, Charlo isn’t as young as his opponent from the Dominican Republic, and he may not have enough youth or hunger to win this fight.

In that case, Premier Boxing Champions may need to go in another direction towards putting their energy into building up the younger lion Rosario rather than wasting time with the flawed Jermell.

The asking price is $74.95 for the Charlo card, which will likely scare away boxing fans sitting on the fence, weighing the option of ordering it. That’s King’s ransom considering what’s going on in terms of the pandemic and the many jobless people in the United States.

Further, UFC has its event taking place on Saturday night, which will create competition that the Charlos can’t afford. There’s also a massive strike against the went with the PPV high price, but when you add in the UFC event opposing it on Saturday, that’s terrible news. 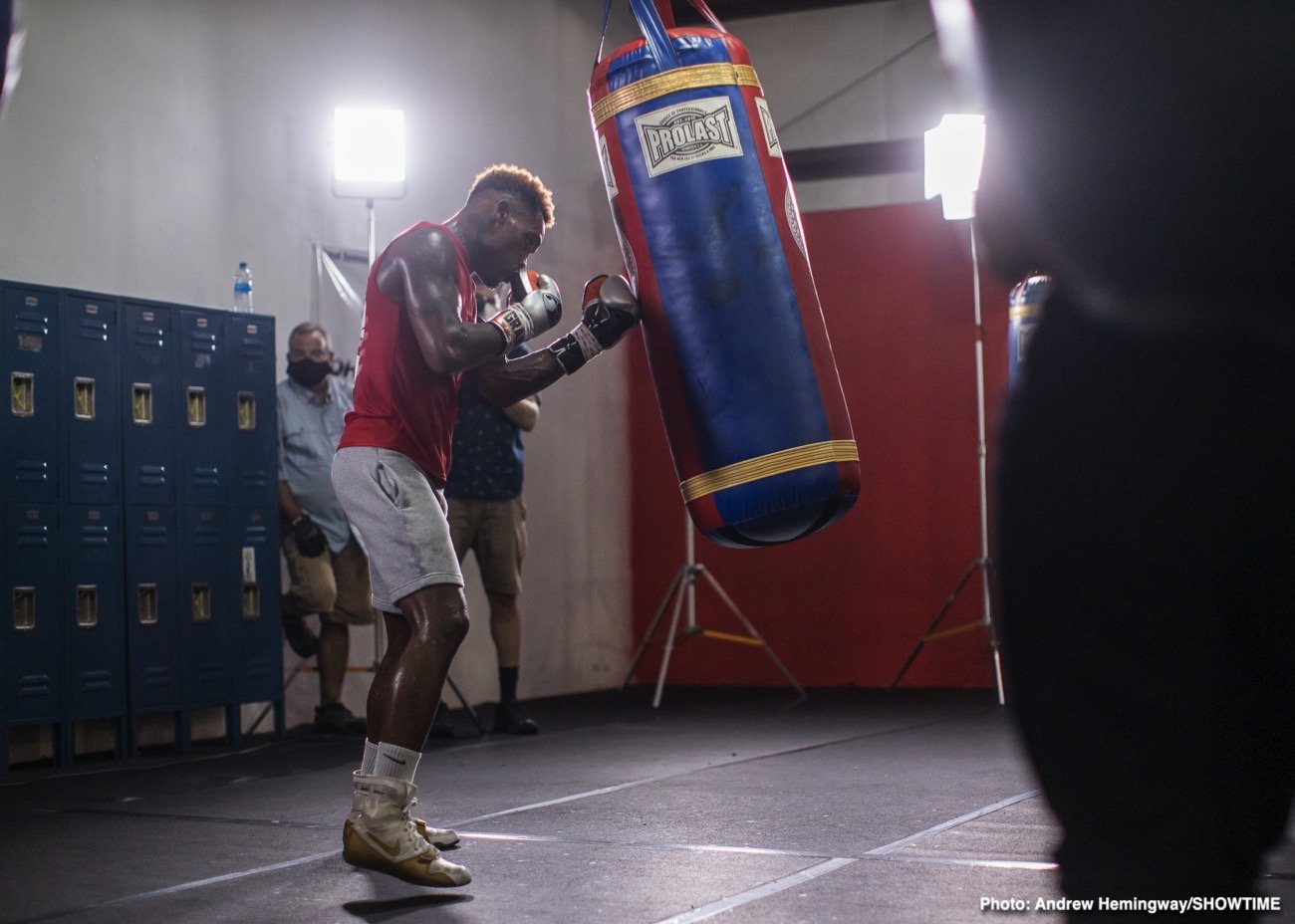 The doubleheader card, which will be shown on SHOWTIME pay-per-view, is supposed to be a launching pad for Jermell, 30, and his twin brother, WBC middleweight champion Jermall Charlo, to turn them both into stars. A lot can go wrong for the Charlo twins, and it wouldn’t be a shock if both brothers lose.

The Charlo brothers are good fighters, but neither is at the level where they can’t be beaten. Jermell has already tasted defeat at the hands of fringe contender Tony Harrison in 2018, and Matt Korobov arguably defeated Jermall.

The best thing that the Charlo brothers have going for them is their outside of the ring image, which some boxing fans find appealing, But inside the ring, they’ve not shown the type of ability that puts them at the level where they need to be to become real stars.

Showtime has priced the Charlo doubleheader.

“Now is our time,” he said. “The big dogs are here to stay,” said Jermell to Yahoo Sports News about him and his brother Jermall. “We’re veterans in this game and we love this sport. To make it to this stage, there’s nothing bigger for us. This is our Super Bowl. This is our national championship. It’s time for us to go get our belts.”

Jermell has been a professional for 13 years since turning pro in 2007, and the best win on his resume is over the raw 21-year-old Erickson Lubin in 2017. When Jermell stepped it up against fringe contender Tony Harrison in 2018, he lost to him.

Although Jermell did avenge his defeat by stoping Harrison in the 11th round last December, the fight was close and competitive. Charlo wasn’t dominating the battle, and that’s troubling given his talk about it being “our time.” Jermell is a good fighter, but there’s nothing that sets him apart from his opponent Rosario.

Charlo has got to be careful

“Rosario is one of those guys who aren’t going to outbox you probably, but he’s so dangerous, and if he hurts you, he could change the whole pace and tenner of the fight,” said DiBella to Seconds Out. “He’s a very dangerous guy.

“I think it’s cool that Charlo took this fight because Rosario isn’t a household name, and he’s not particularly well known with boxing fans. But the mother f**** is a beast. I mean, he’s a tough, tough draw.

“When ‘J-Rock’ [Julian Williams] fought him, I don’t think he knew what hit him. So I think it’s a dangerous fight.

Charlo has got to be careful against a puncher like Rosario, as he hits too hard, and he’s someone that will be coming after him all night. Jeison lacks the boxing pedigree that we saw from Tony Harrison with his win over Charlo two years ago, but he makes up for it with his power.

Jermell hasn’t been in with a tough-minded opponent like Rosario, who can punch with either hand. There’s a good chance that Charlo may get knocked out in this fight if he can’t score an early stoppage. Jermell is the smaller, weaker of the Charlo brothers, not at the same level as Jermall.

Harrison badly exposed Jermell in their two fights, showing that he’s a one-trick pony and someone that can be outboxed and out-thought. The way that Jermell has been enjoying the life of a wealthy person since his last fight against Harrison raises the question of whether his mind is still on boxing. 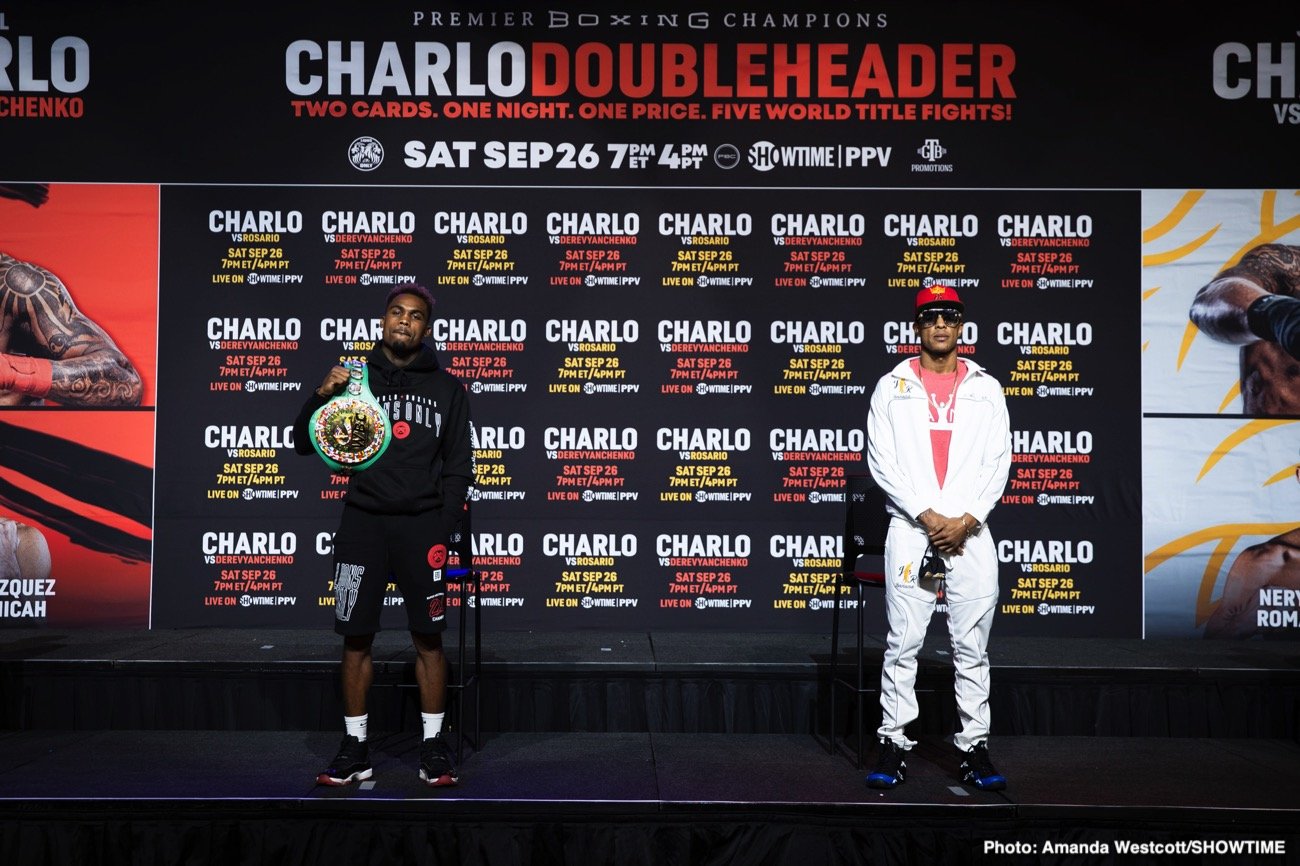 Rosario has a lot more hunger going into Saturday’s fight than Jermell, and there’s a good possibility that he’s going to pull off another upset like in his last fight against Julian Williams.

“Maybe the fact that we haven’t seen as much as the other kid makes him even more dangerous because we don’t know what he has on a level like this,” said DiBella about Jeison Rosario. “So I’m looking forward to that fight.

“Jermell,” DiBella said when asked who’s going to win the Charlo vs. Rosario fight. “I wouldn’t be shocked if it went the other way. I think that even if he [Charlo] gets clocked [he’ll still win against Rosario].

“Even if he touches the canvas and gets up, he’s got enough grit and the ability to come back and win the fight. I favor Jermell in that fight, partly because I don’t know as much about Rosario. I’ve known the Charlos since they were 16, 17-years-old, literally.

“I think it’s a very good fight, but I would favor Jermell, and I’m going to predict Sergiy [Derevyanchenko] by a decision [over Jermall Charlo],” said DiBella.

Jermell likes to set up traps for him to explode on his opponents with big power shots, and we’ll have to see if that works against Rosario. The trainers or Jeison have tipped him off already, letting him know what to expect from Charlo.

If Jermell doesn’t focus on playing it safe in this fight, he could run into one of Rosario’s big uppercuts or hooks and wind up getting dropped. Rosario is a perfect finisher, and he might take Jermell out if he gets him in trouble as he did with ‘J-Rock’ last January in Philadelphia.

“Rosario is bigger, stronger, has better punch placement, and lands with harder shots. I believe that he will win a decision, if not by early knockout or TKO. It’s a life-changing event, and Rosario won’t waste this opportunity,” said Ortiz.

“This is a very intriguing bout. Jeison Rosario is a big 154-pounder, as is Jermell Charlo,” said trainer Andre Rozier. “They both have good punching power. But It will come down to a battle of wills, and I’m seeing the hunger of Jeison being a stronger force. Jeison by decision.”

Luis Ortiz and trainer Andre Rozier see something in Rosario that makes them believe he can win this fight. Interestingly, boxing fans overlook Rosario in the same way they were before his battle against Julian Williams. No one was giving Rosario a chance before that fight, and he shocked the world with his 5th round knockout win. 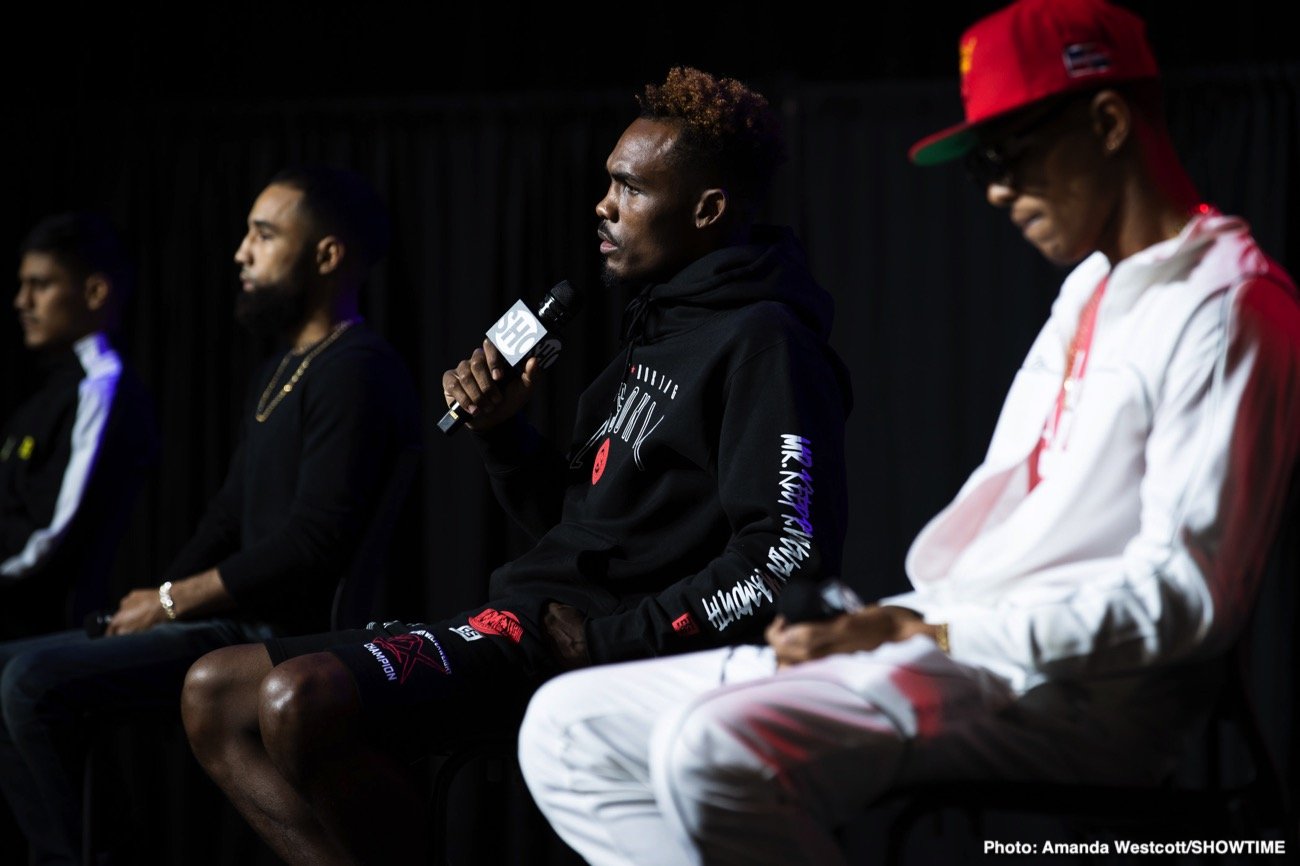 Now he’s in the same position of being overlooked by fans, and we could see a repeat. If that happens, PBC might want to consider a losers bracket fight between J-Rock and Jermell where they can fight it out, and the winner moves on and potentially challenges a world title in 2021.