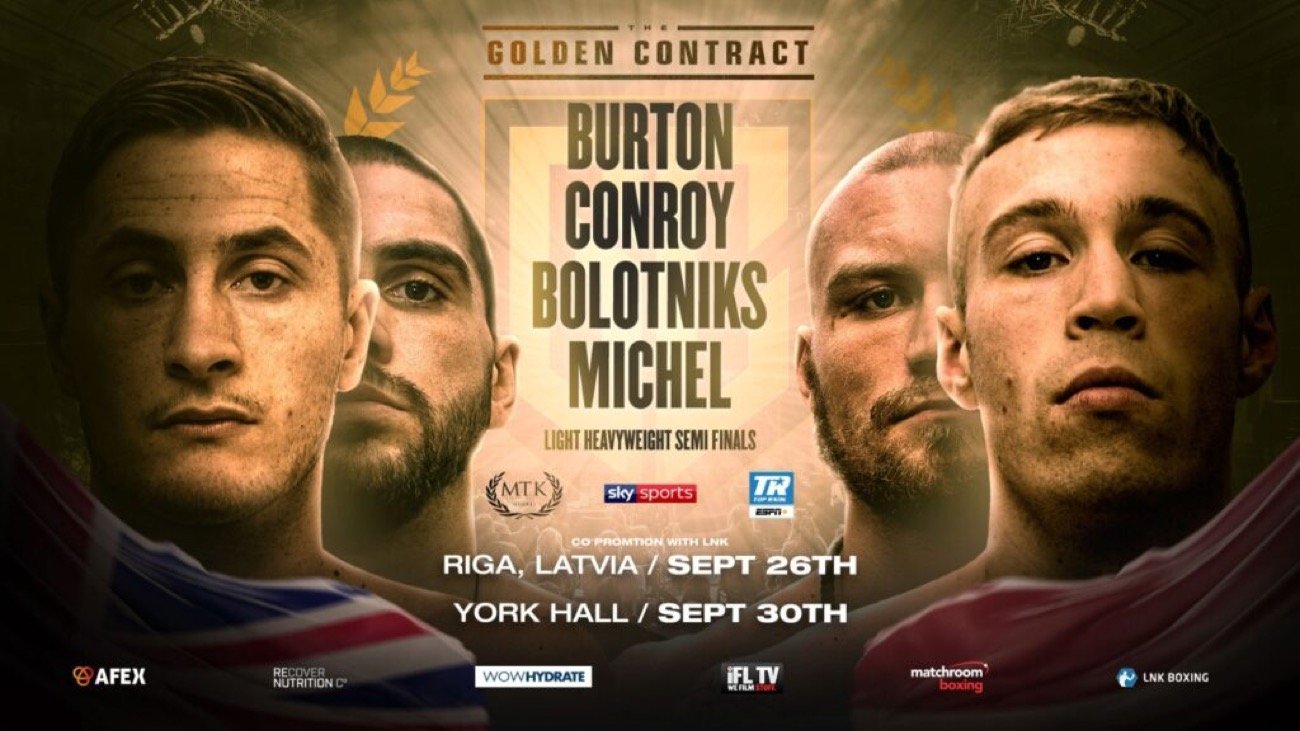 The Golden Contract light-heavyweight semi-finals were confirmed last night – after a dramatic draw from Production Park Studios in Wakefield.

The four remaining fighters in the competition are Hosea Burton, Liam Conroy, Ricards Bolotniks and Serge Michel, with each of them taking part in the draw online via Zoom.

Alex Steedman and Barry Jones hosted the draw to determine who would receive the Golden Ball and have the opportunity to select their opponent. After drawing the balls on behalf of each fighter alphabetically, it was Michel (10-1, 7 KOs) who had the chance to choose.

The four fighters reached the semi-final stage after impressive showings in the quarter-final, with Bolotniks earning a devastating first round knockout win over Steven Ward, and there were impressive points wins for Burton over Bob Ajisafe, Conroy against Andre Sterling, and Michel vs. Tommy Philbin.

The fight between Conroy and Michel is another huge addition to the event on September 30, as that will also feature the highly-anticipated super-lightweight and featherweight finals, with Ohara Davies taking on Tyrone McKenna, while Ryan Walsh goes up against Jazza Dickens.

The upcoming #GoldenContract finals just got even bigger – after details were revealed for the highly-anticipated light-heavyweight semi-finals.

Hosea Burton, Liam Conroy, Ricards Bolotniks and Serge Michel are the four elite fighters remaining in the competition, with the two semi-finals set to take place on separate dates next month.

The bout that involves Bolotniks will be held in Riga, Latvia on a co-promotion with LNK Boxing on September 26 and broadcast live on IFL TV, while the other semi-final will take place at York Hall on September 30, on the undercard of the super-lightweight and featherweight finals. A draw to determine who will be facing who in the semi-finals will be held later this month.

The inclusion of a light-heavyweight semi-final is a big addition to the super-lightweight and featherweight finals event, which already features Ohara Davies vs. Tyrone McKenna and Ryan Walsh vs. Jazza Dickens, and will be broadcast live in the UK on Sky Sports in association with Matchroom Boxing, and in the US on ESPN+ in association with Top Rank.

MTK Global Vice-President Jamie Conlan said: “Given the fact we have fighters from multiple countries in the tournament we have had to adapt to the current circumstances in the world right now and have decided to split the semis over two night in two different countries. Vadim Milov and LNK Boxing in Latvia will help accommodate and be our man on the ground for the show on Sep 26th.

“The semi-finals are bound to be intriguing fights, and the mix of styles should all gel well. Bolotniks is heavy handed and a serious puncher, Michel is an Olympian so has the amateur pedigree, Burton is the most seasoned and well-rounded and Conroy has grit, heart and work ethic. No matter what way the draw works out, we are bound to have two great fights!”

“Bolotniks is in great shape and is ready to take on any of the fellow semi-finalists in the tournament. We really believe our man can go all the way in the Golden Contract or I wouldn’t have entered him in to the tournament in the first place. The fact we have home advantage now puts us in an even greater position to reach the final.

“We have been working very hard over the last few years to bring big-time boxing to the great city of Riga. Staging big events such as the Golden Contract and The World Boxing Super Series to Latvia is hopefully just the beginning for the region. We have state of the art facilities here with some fantastic fighters. It gives me great pleasure being able to showcase this to the World.

“It going to be a great night of entertainment! Alongside the semi-finals we have Marcis Grundulis in action, as well as Arturs Ahmetovs. Arturs is coming home after starting his career in the USA, he has got good some real potential and we are looking forward to working with him. We also have our undefeated Ukrainian heavyweight, Dmytro Bezus taking on the Italian, Emanuele Venturelli.”