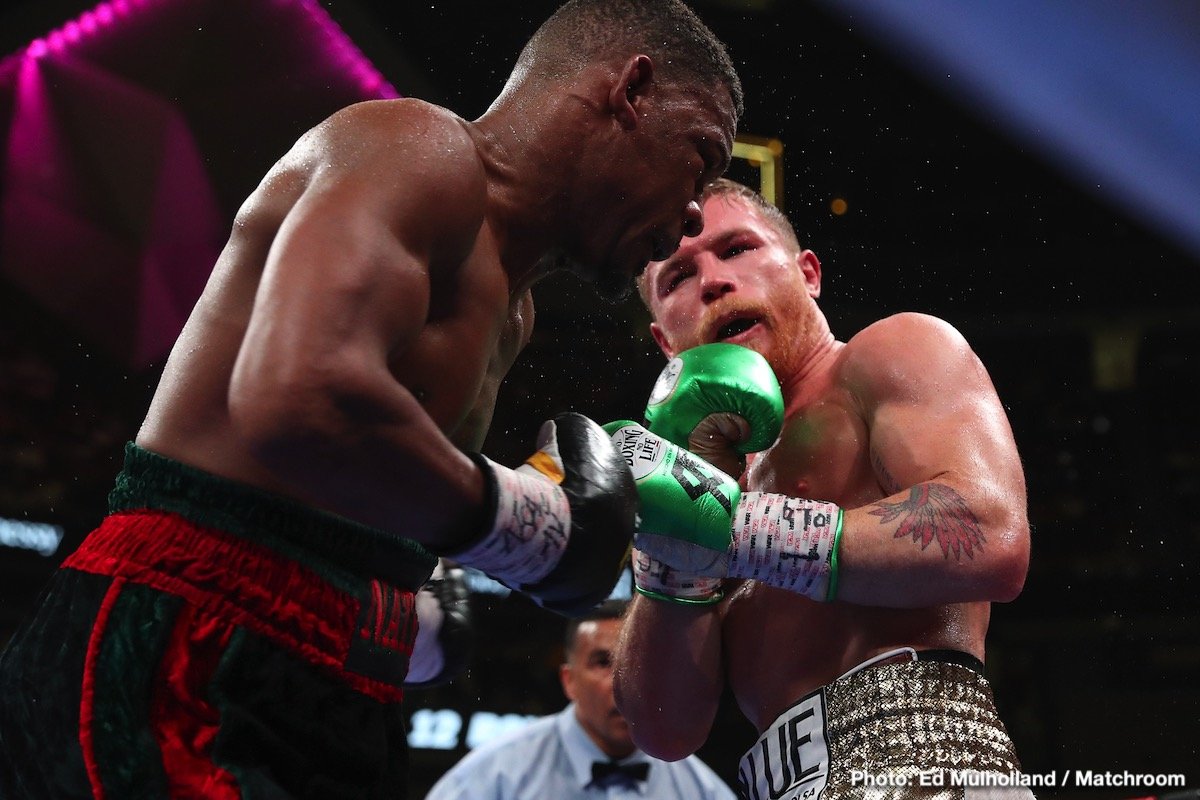 By Charles Brun: Fans want to see ‘The Face of Boxing’ Canelo Alvarez return to the ring in 2020, even if it’s against a mediocre opponent. They want to see their hero pick in the ring on DAZN showing off his skills against whoever.

Alvarez, 30, hasn’t fought since his knockout win over Sergey Kovalev last November, a fight in which the Mexican captured the WBO 175-lb title.

Canelo (53-1-2, 36 KOs) is bogged down with litigation right now over his lawsuit he initiated last week against Oscar De La Hoya, Golden Boy Promotions, and DAZN.

Canelo may find it more challenging for him to fight now, given that DAZN is said to want him to fight a premier opponent. Unfortunately, boxing doesn’t have many premier fighters, especially at 168. No one fits the label of being called a “premier” fighter.

DAZN wants Canelo to be in marquee fights

“There’s a dispute, and I guess the Canelo and Golden Boy situation has been unsteady for a while now, and this is the culmination of all that,” said Hearn to IFL TV. ” 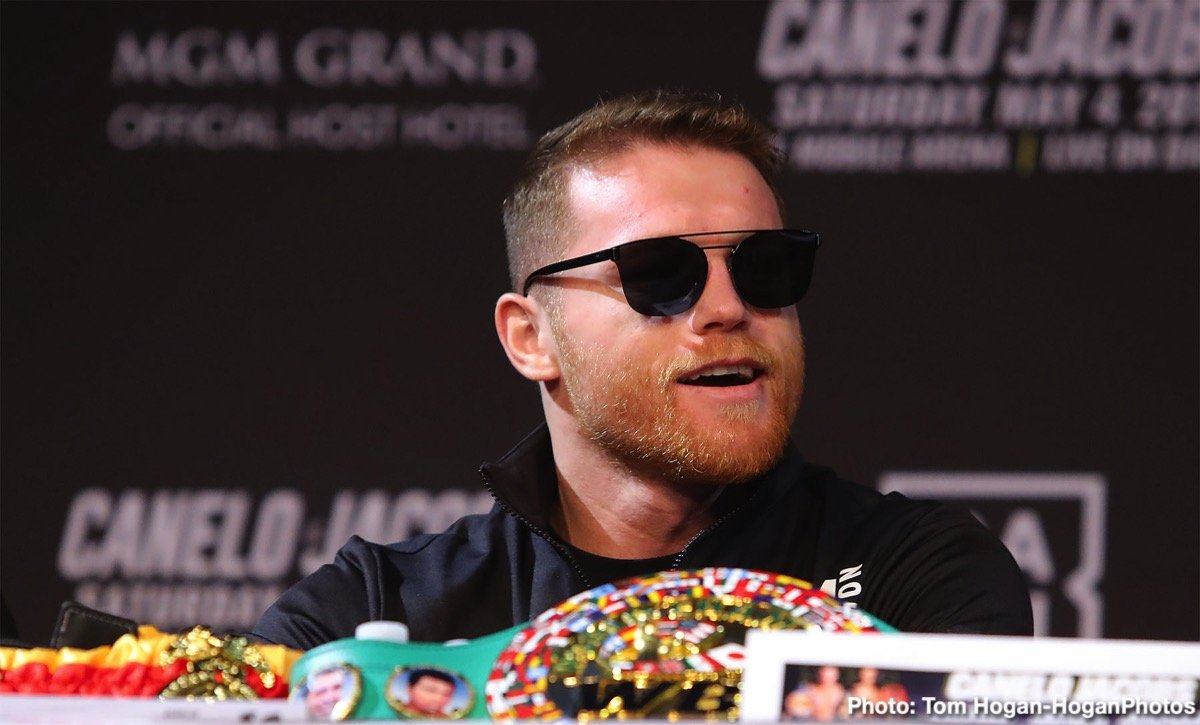 “I don’t know the ins and outs, and it’s quite sad to see when it ends up in court. I’ve never personally been in a courtroom situation with a fighter, and I don’t expect to ever be there, to be honest with you.

“DAZN probably has an opinion that they want him to be in marquee fights. I think they wanted him to fight Gennadiy Golovkin for a long time now, and they’ll have their strategy behind them as well.

“How does this affect them? They want Canelo Alvarez to fight. He’s a big part of the schedule on DAZN, but they’ve got their reason for standing firm, and it’s not financial. It’s more of a point of principle of what they believe in. So again, that’s for them to all figure out.

“I’m happy I’ve over on this side and say, ‘you crack on in court. I’m just going to go and do my thing,” said Hearn.

Fat chance Canelo starts fighting marquee guys because he hadn’t done that since 2018 when he fought Gennady Golovkin for a second time. It doesn’t appear that Alvarez wants any part of the third fight with GGG, and he’s probably got a good reason for it.

There’s a lot of bad blood between Canelo and Golovkin from words that were said before the second match, and I overthink has been said. 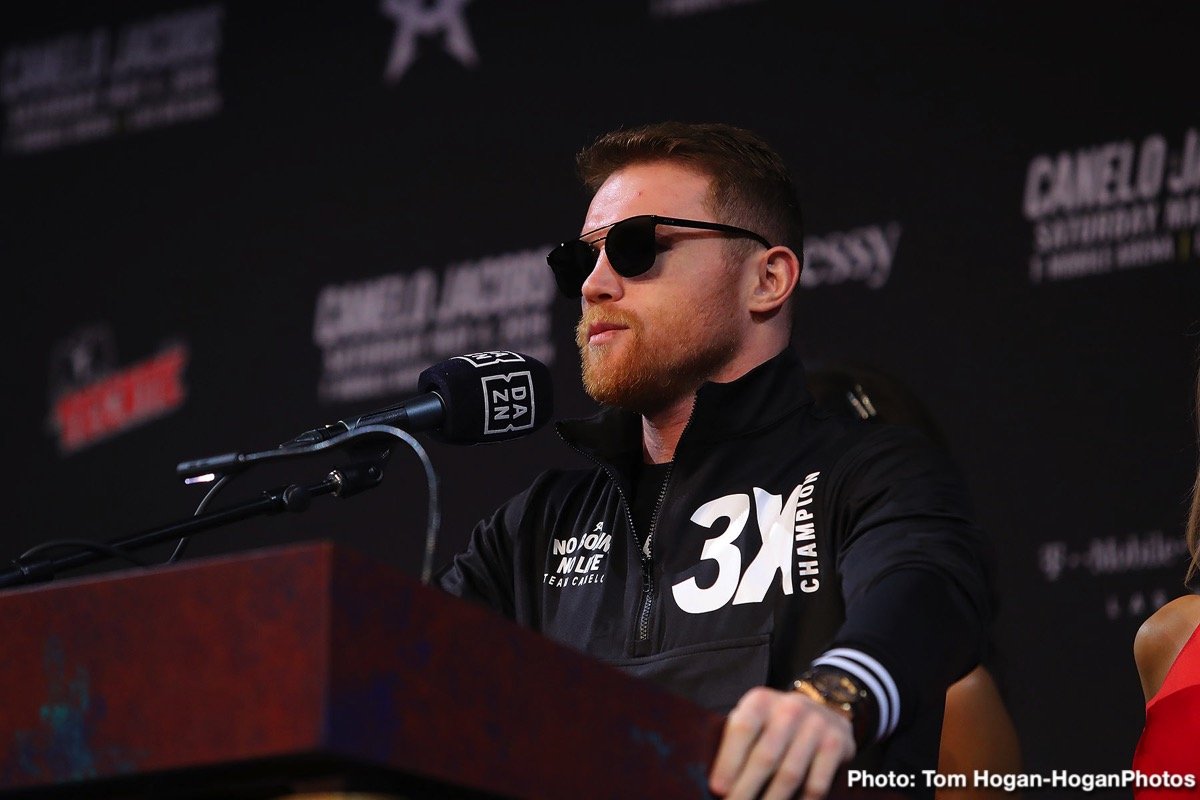 Further, Golovkin is a tough cookie, and he gave Canelo all he could handle in their two fights. Why would Canelo want to fight someone as tough a GGG when he can take more comfortable fighters like Billy Joe Saunders and Avni Yildirim?

DAZN would have accepted Khabib and Masvidal

“While the schedule is October, November to be announced in the next seven days, we got some strong fights,” said Hearn. “We all do want collectively for Canelo Alvarez to fight because he’s a big part of the DAZN schedule.

“I would think if those guys [Khabib Nurmagomedov and Jorge Masvidal] were in the mix to fight Canelo. I know there were talks of Canelo fighting an MMA guy.

“It wasn’t one day these guys were plucked from the sky, but those conversations were ongoing for a while. And yes, DAZN would have absolutely accepted those guys.

“They’re huge subscriber-driven events. That’s a big fight. Without going too deep into it, I think this probably stems from the fact that Canelo didn’t fight Gennadiy Golovkin, and that was what people anticipated,” said Hearn in explaining what contributed to Canelo’s problems.

Dana White of UFC isn’t about to let his fighters Khabib and Masvidal, take on Canelo in a boxing event. Why would he do that? We saw what happened when White’s former #1 star in the UFC, Conor McGregor, fought Floyd Mayweather Jr in a boxing event in 2017.

McGregor lost badly but made a lot of money, and it arguably derailed his career. Without the need for cash, McGregor seemed to lose his ambition. If Dana let Masvidal or Khabib fight Canelo, they would likely be embarrassed by him, which wouldn’t be suitable for their popularity.

Additionally, all the money they would make fro fighting Canelo might cause the same reaction that we saw with McGregor with the loss of ambition. It takes an outstanding fighter to keep competing once they’ve made millions.

In a lot of cases, when fighters hit it big in making a lot of money, their careers begin a steep descent.

“Right now, I hope he fights Billy Joe Saunders or Callum Smith [get picked to face Canelo],” said Hearn. One thing I believe is everybody wants him to fight this year. 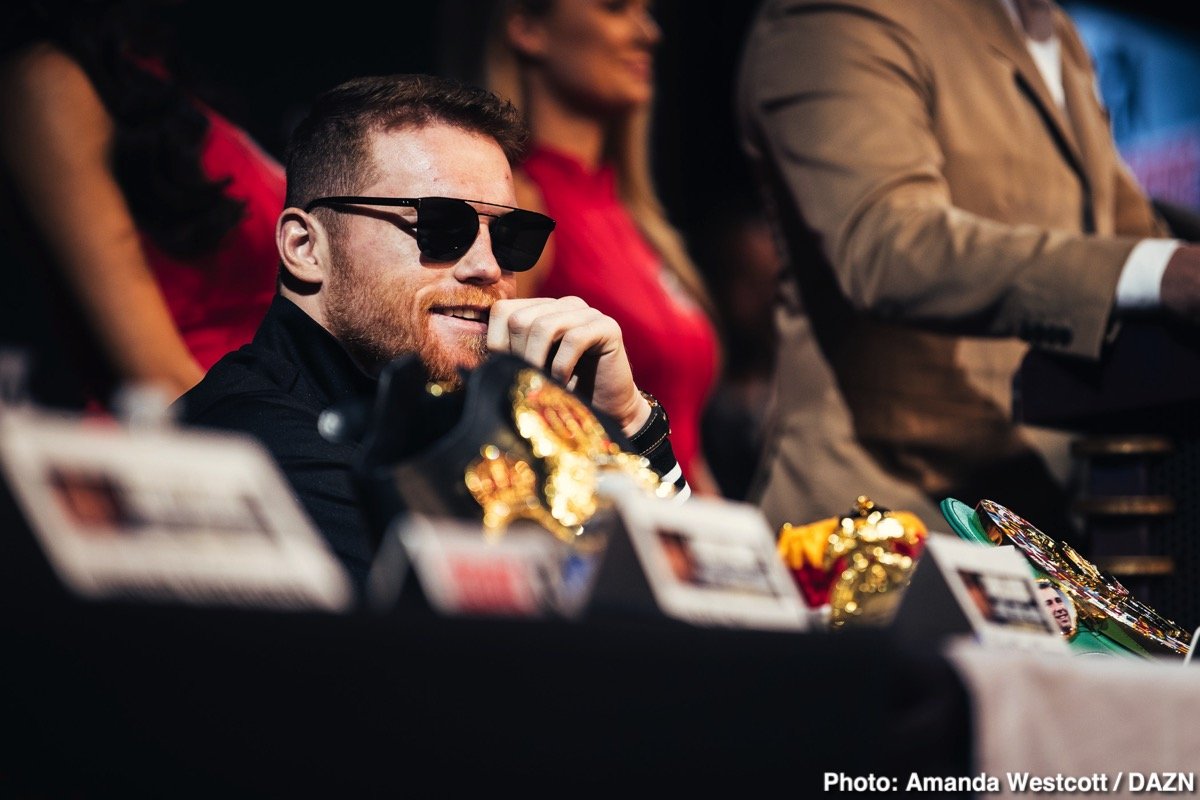 “If that can happen, and I don’t believe it will be November 14th, then I believe it’ll be Callum Smith or Billy Joe Saunders [that faces Alvarez]. But we can’t hold our breath for that.

“So I hope he fights this year, and if he manages to beat one of those two, he should fight Gennadiy Golovkin next May.

For November 14th, I think that’s unlikely [that Canelo will fight Callum or Billy Joe], but I know everybody is working for Canelo to fight this year.  So if he fights one of our guys, great,” said Eddie.

The world wants Canelo, the face of boxing, to return this year, but his litigation with DAZN, Golden Boy, and Oscar De La Hoya may make it hard for him to fight.

Also, with DAZN wanting Canelo to fight a premier fighter, they might not be willing to give him what he’s asking for if he picks Avni Yildirim, Saunders, or Callum as his opponent.

Those are decent fighters, but not someone that will bring in subscribers and get the fans excited. Canelo needs one of these fighters to interest fans to subscribe to DAZN:

Saunders and Callum unlikely to fight in 2020 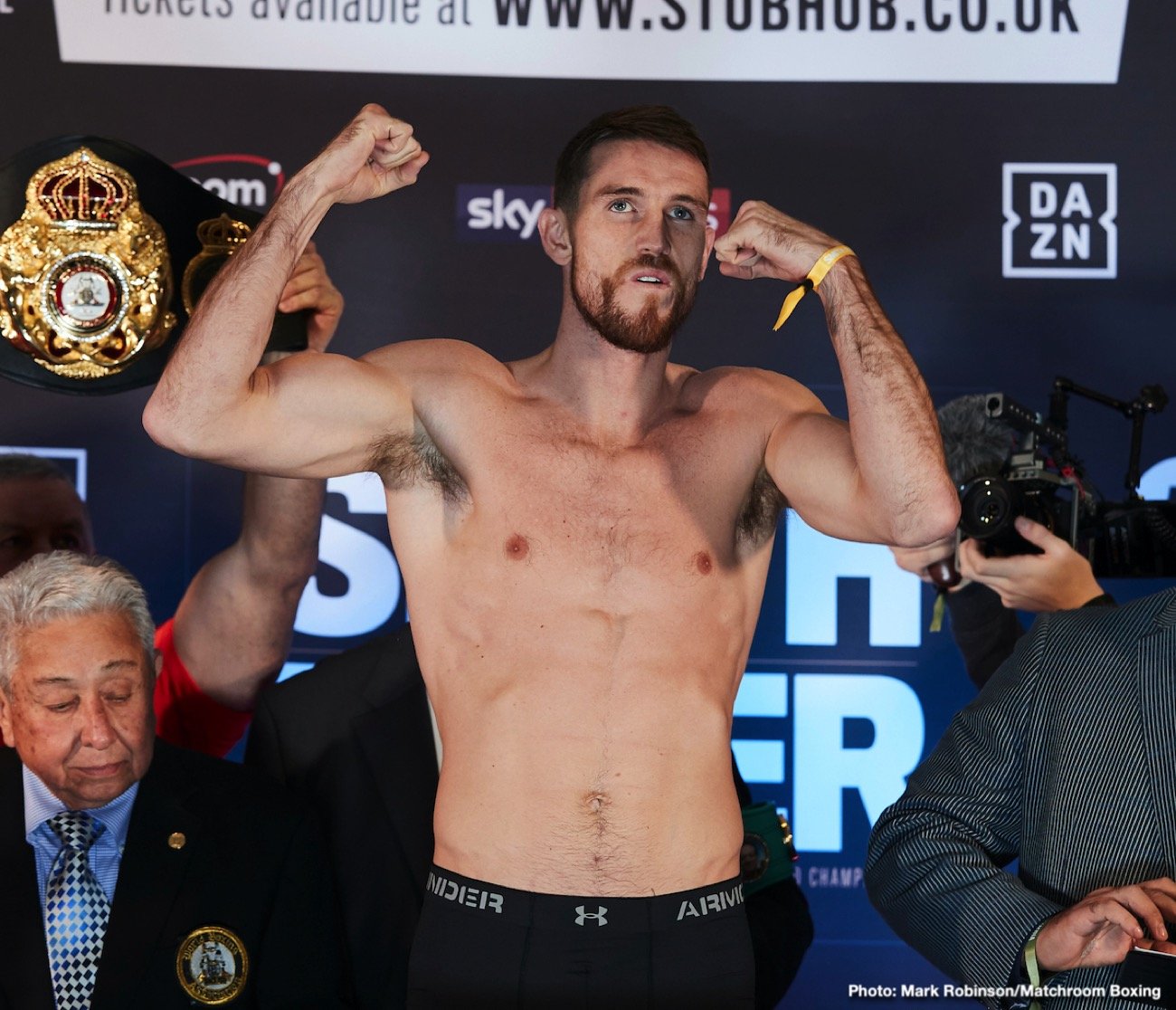 “And so do they want to roll the dice on pay-per-view? Is there a pay-per-view slot for that fight? It’s difficult to do.

“I think you’re more likely to see Billy Joe and Callum taking a fight in November, and then fighting each other in February or March next year in a unification fight when things do get back to normal.

“So I’m hoping that Canelo picks one of those guys. That’s what I’d like. Right now, I think he’ll [Saunders] take this fight, and the mandatory will present itself soon.

“Whether that’s next year or next summer whenever it’s going to be. I feel like the governing bodies have to think carefully about the mandatory situations.

“I know that it’s easy when you’ve got a champion, and there’s a mandatory for a fight that makes no commercial sense. ‘Oh, these mandatories are a joke.’

“You saw Bob Arum do it when he was talking about the Franchise championship. When you have a mandatory challenger, you’re pushing for that spot. ‘My guy is mandatory.’ But I just feel like in this climate; you have to be a little bit careful.

“No disrespect to Zach Parker or whoever that mandatory may be. It doesn’t have any value. We just need to make sure those fights happen when you can get a good a good payday as a mandatory challenger, or there is a demand for that kind of fight.

“I’m talking about Billy Joe fighting at the end of November, and I think Callum Smith around that same time. I’d love them to fight each other, but it has to be on Box Office, and quite honestly, to get the numbers that both guys want for that fight, they would either have to roll the dice on pay-per-view or they’d have to wait for a crowd.”

Their match is too vital for them to fight without crowds, and it’s not the type of match-up that would do well on pay-per-view. It will be a gamble if the Saunders-Smith unification bout is put on pay-per-view.

If it does poorly, then they will have missed out on all the gate money by not waiting until next year. There would be no way of making up the lost revenue from PPV by having the gate money as a backup source.

“I don’t think so, being totally honest,” said Hearn when asked if he believes that Callum will fight Saunders in 2020. Unless both guys want to roll the dice on it, my advice to them would be to not even do that.

“My advice would be to have a defense. ‘You haven’t boxed for a year, either of you. Have a solid defense of your world title, and then fight each other in February or March.

“Hopefully, Canelo comes in and goes, ‘Billy Joe, Callum Smith,’ and then it goes from there. It goes back to keeping guys active. Some guys are keener than others in staying active, and some want to wait.

“Billy Joe, if you’re looking from a UK level, which is a lot easier to do at the moment,” said Hearn when asked who Saunders and Callum Smith can fight this year.

“John Ryder, Rocky Fielding, Martin Murray, Zach Parker,” said Hearn in naming guys he’d like Saunders to fight. “For both. Chudinov, these are guys that are in the top 15.

Callum Smith has wanted to fight for the WBC title for a long time. He’s been the Diamond champion forever. At the [WBC] convention, he was told that Yildirim would be mandatory, and he’s effectively the next mandatory.

“So, therefore, if Yildirim doesn’t fight Canelo, Yildirim should fight Callum Smith. So that’s something we’re pushing for as well,” said Hearn.

It makes sense for the World Boxing Council to pick Callum from the top spot to fight Yildirim if Canelo doesn’t face him for the vacant WBC 168-pound title.

Callum (27-0, 19 KOs) has held the WBC Diamond super middleweight title for three years since beating Erik Skoglund in 2017. He would be an excellent substitute to face Yildirim if Canelo can’t take the fight.