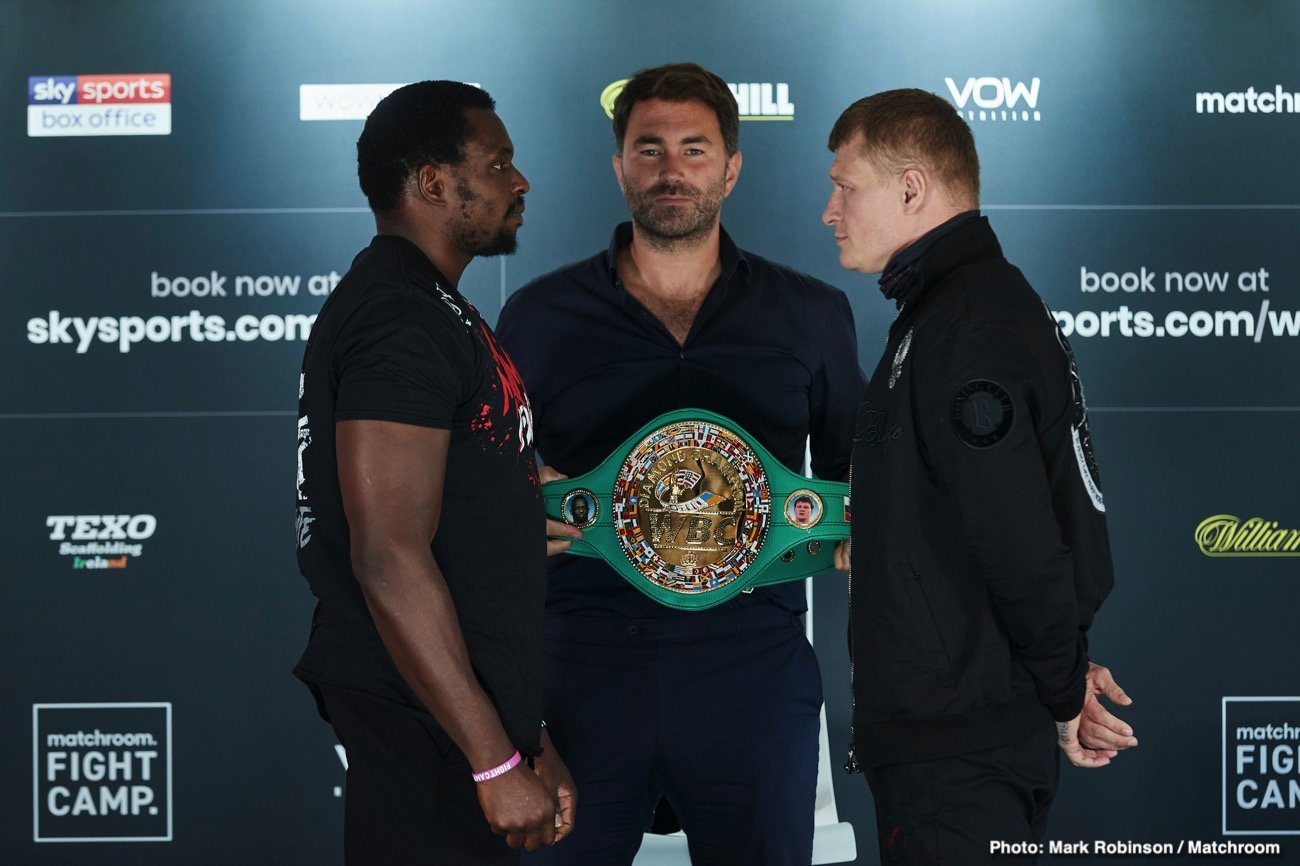 By Matt Lieberman:  Eddie Hearn has targeted November 14th or 21st for the rematch between Alexander Povetkin and Dillian Whyte in London, UK. Hearn isn’t worried about Whyte (27-2, 18 KOs) returning too quickly after his brutal 5th round knockout loss to the former WBA heavyweight champion Povetkin (36-2-1, 25 KOs) last month on August 22.

Hearn feels that Whyte, 32, didn’t take a lot of punishment. Although Whyte was knocked unconscious in the 5th round, Hearn believes that it wasn’t as damaging as it would be if he took he took a prolonged beating.

Speaking with IFLT, the Matchroom promoter Hearn said he wants to get the Povetkin vs. Whyte 2 rematch in November rather than in 2021 because they don’t want to wait until February or March.

Hughie Fury vs. Dave Allen on the undercard 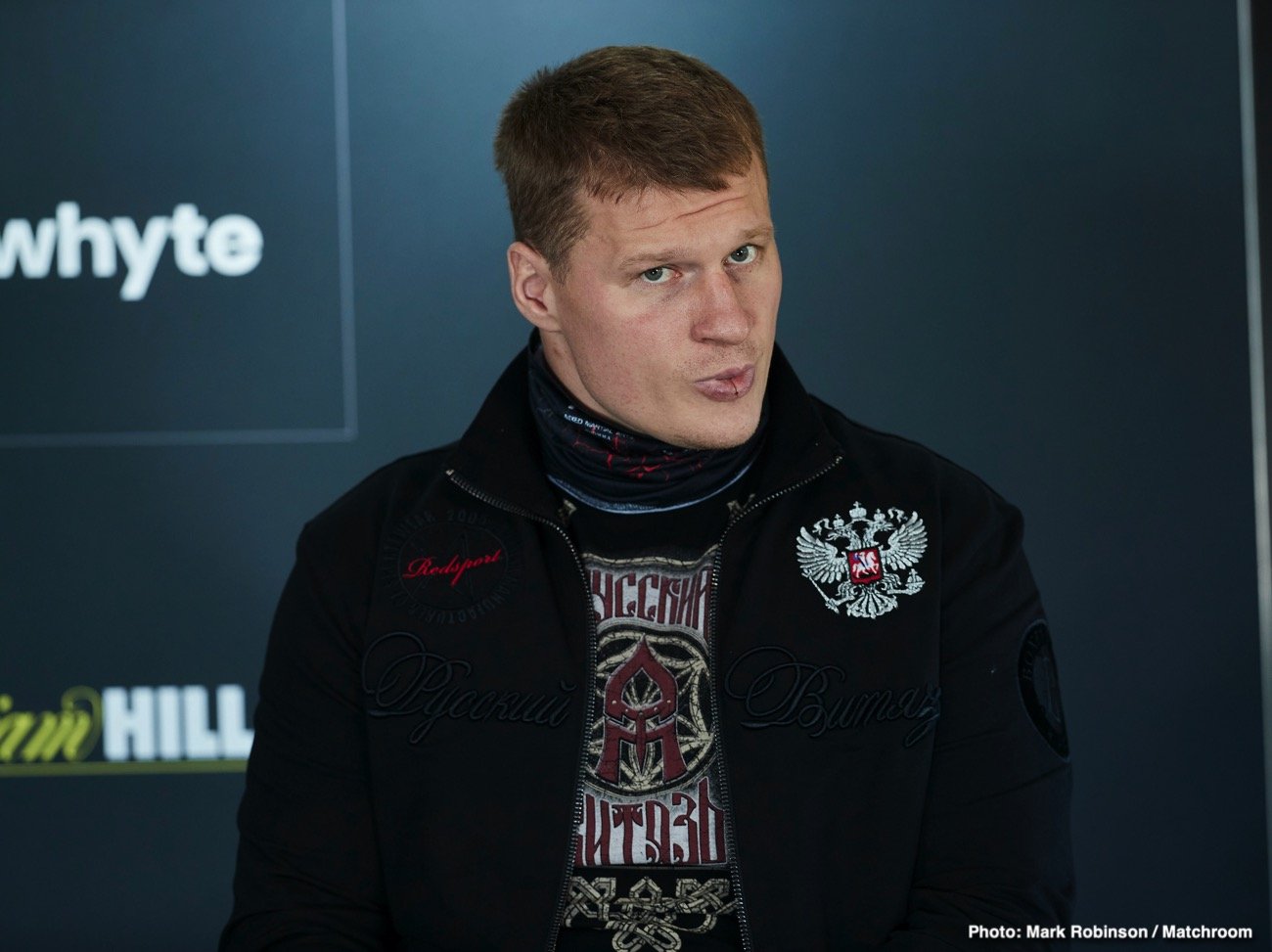 “They are 100% on for the rematch,” said Hearn to IFL TV on Team Povetkin about the rematch between Alexander and Whyte. “They’re on board, and they’re happy. They’re making great money for the rematch, and they think they’re going to win.

“They just knocked the guy out. So they also agreed that we should do it sooner rather than later because AJ goes in December, and February probably goes in December. They don’t want to go in February or March.

“So we will go on November 14 or November 21. It’s 12 weeks. They’re heavyweights, and they’re not making weight. They’ll have three or four weeks off and then go into camp. He still needs a break,” said Hearn on the recently knocked out Whyte.

A 12-week turnaround for Whyte and Povetkin is fast, and it’s not going to leave either fighter with much time to rest. Povetkin will be turning 41 tomorrow, and he would appear to be more negatively affected by a short recovery time between fights. With that said, Whyte was just knocked cold by Povetkin, and it’s not wise to return quickly after that kind of a knockout.

If Whyte’s punch resistance has been diminished because of the knockout he sustained against Povetkin last month, then he won’t last long for the rematch. In that situation, it would be a good idea for Whyte to unload all of his artillery in the first two rounds to get Povetkin out of there.

The longer the fight goes, the greater the chance that Povetkin can land one of his immense power shots on Whyte’s chin.

Whyte wants to come back quickly, and it’s understandable why he would. What he just went through in losing to Povetkin has been tough on him, especially given that he was winning the fight up until the knockout. 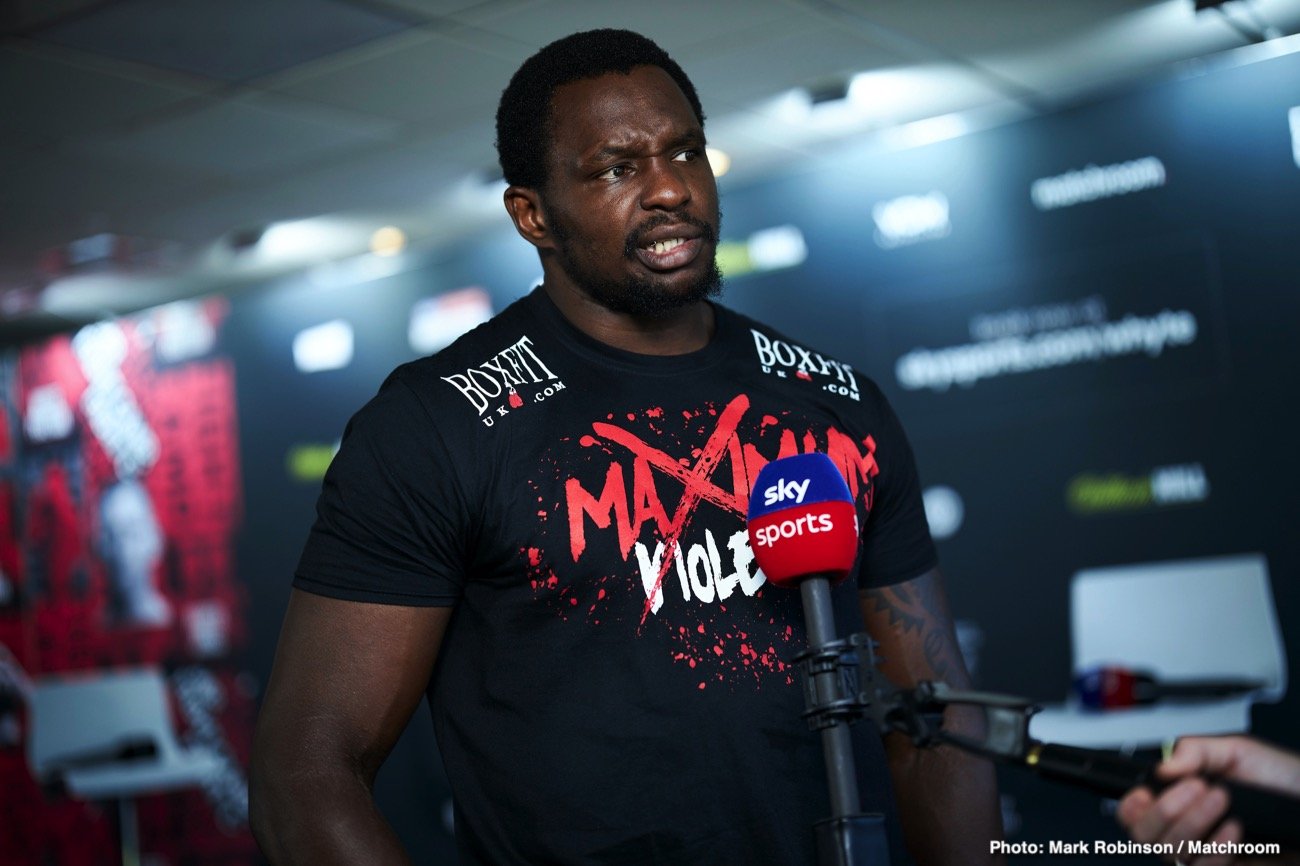 Whyte had knocked Povetkin down twice in round four, and he looked like he was on the easy street heading into round five.

“He’s had a week off, and he’ll have another two-week break,” Hearn said of Whyte. “He’ll tick over. He’s also obsessed with winning this rematch, so he doesn’t want to rest. He wants to get back in the gym.

“He’s had a long camp. He didn’t take punishment. I know it was a lousy knockout, but it was one shot. So he’s fine, but he still needs that time to rest.

“Four weeks of total rest, and then back into camp. Some would say it’s too soon, but if he doesn’t rematch in November, then he might be waiting until February or March, and that might be too long.

“So we’re ready to do that fight, and that fight is happening in the UK. I think Rabinksky said, ‘We would like to do it in Russia’ obviously. But we will stage the fight, and we’ll do it on November 14 in London. At the O2 or somewhere else we’re working at the moment,” said Eddie

Hearn should make sure that Whyte is given medical tests to receive 100% clearance before he starts training for the November rematch with Povetkin.

Unless Whyte has already been examined and given a clean bill of health to fight, Hearn is just guessing on the state of his health.

Whyte vs. Povetkin II will be in front of fans

“Subject to another spike, Whyte-Povetkin will be in front of fans,” Hearn continued. “How many fans? It might be 500, it might be 5000, but we know it’s going to be a limited number.

“But hopefully things improve, and we can bring fans back for Whyte-Povetkin,” said Hearn.

It’s excellent news that the Whyte vs. Povetkin rematch will take place in front of at least a partial crowd in November. But if Hearn and Whyte were willing to wait until 2021, they could stage the Povetkin fight in front of a full audience. There would be a lot more money to be made in that case.

What Hearn is betting on is that Whyte will beat Povetkin in November. Then he’ll be able to get the World Boxing Council to vote on allowing Dillian to challenge WBC heavyweight champion Tyson Fury in early 2021.

Hearn already revealed that’s the reason why he wants to have Whyte face Povetkin in November. We’ll see if the WBC will order Fury and Dillian to fight in early next year.

Fury doesn’t seem to care. Although he’d like to face Joshua as soon as possible, he’ll settle for a fight with Whyte if he has to take that detour so that he can hold onto his WBC title. Fury won’t give it up by vacating it.

It’s all well and good that Hearn is saying that Whyte didn’t absorb punishment in being knocked unconscious by Povetkin, but he must be checked out before he starts camp.

« Warren willing to make Usyk vs. Dubois for WBO title if Joshua vacates

Charlo vs. Derevyanchenko: Jermall not worried about outperforming Golovkin »