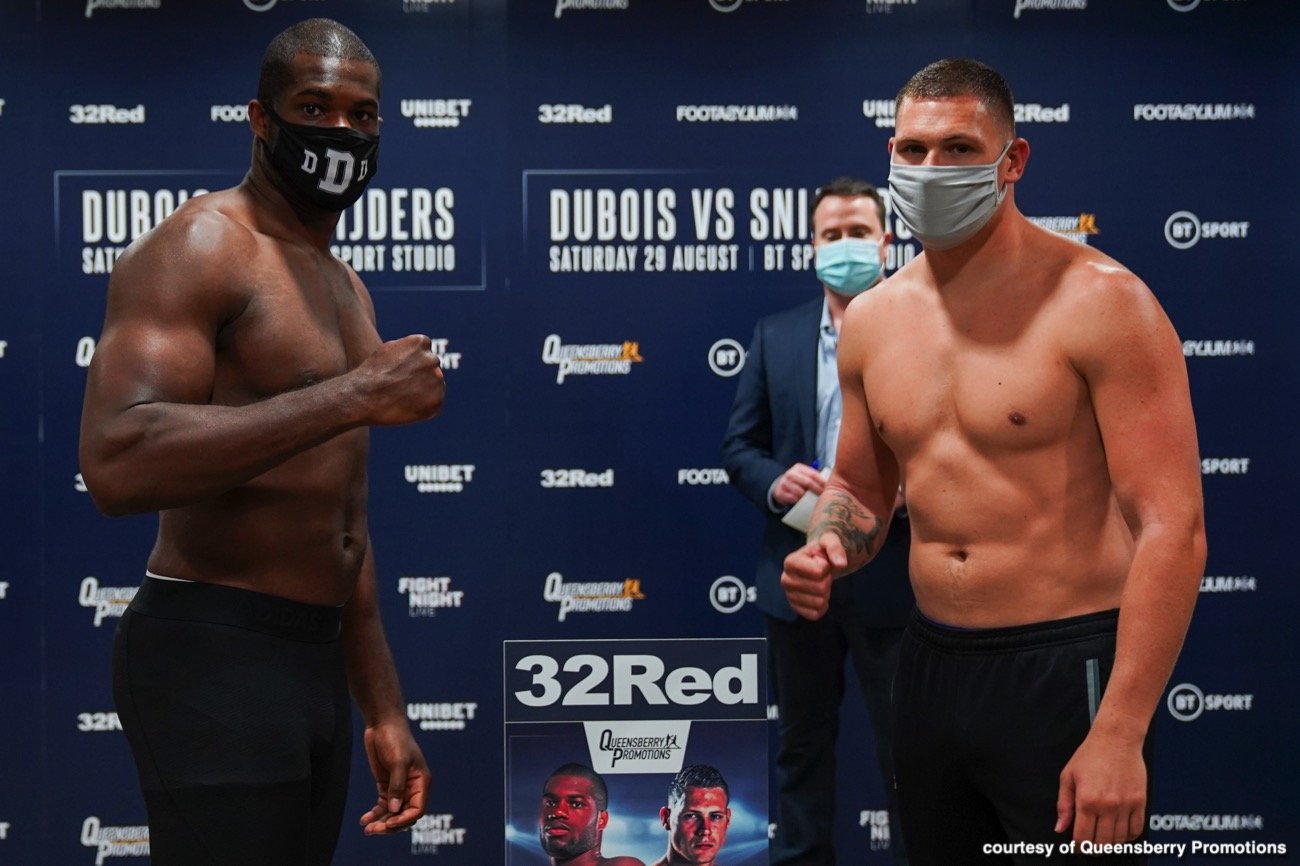 By Barry Holbrook: Daniel Dubois weighed in 27 pounds more than his opponent Ricardo Snijders on Friday at the weigh-in for their fight this Saturday night at BT Sports Studio in London, England. The 6’5″ heavyweight Dubois (14-0, 13 KOs) weighed in at 242 lbs compared to 215 lbs for his opponent Snijders (18-1, 8 KOs). Dubois and

The size, power, and the talent advantage the Dubois will have over Sneijders will make it difficult for the Norwegian fighter to last long against him.

Dubois will likely destroys his overmatched opponent Snijders to make him knockout win #14. For Dubois, Snijders is arguably a huge step down from the recent opponents he’s obligated. 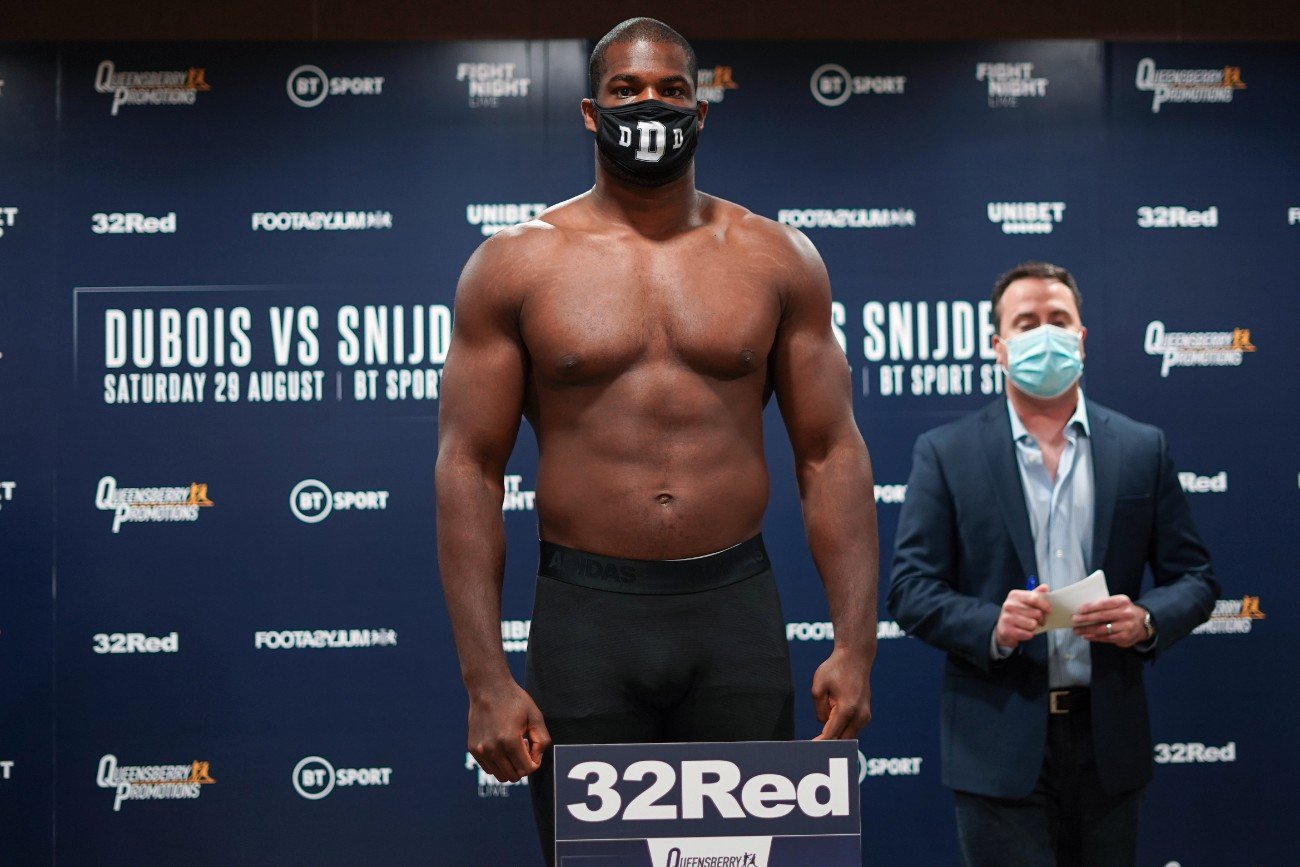 Dubois-Snijders will be shown on ESPN+ in the United States on Saturday. For a lot of casual boxing fans in the U.S, this will be the first time they’ve seen Dubois, and that’ll make it interesting.

Dubois will be showcasing his skills against his replacement opponent, and that should give him a chance to impress new fans. The reality is, Dubois is taking a stay busy fight to get him ready for a much bigger contest against 2016 Olympian Joe Joyce later in 202o.

Dubois and Joyce would already be fighting by now, but the pandemic has gotten in the way of the contest. Once these two giant heavyweights do meet up, there will be a lot of interest from boxing fans in seeing them battle it out.

Other weights on Saturday’s Dubois vs. Snijders card:

Matchroom promoter Eddie Hearn isn’t too impressed with Dubois’ opponent  Snijder for this Saturday night, and he doesn’t see any reason why he should consider matching Daniel up with Dillian Whyte. Dubois has recently expressed interest in fighting Whyte, but that fight isn’t going to happen unless Daniel starts facing better opposition. 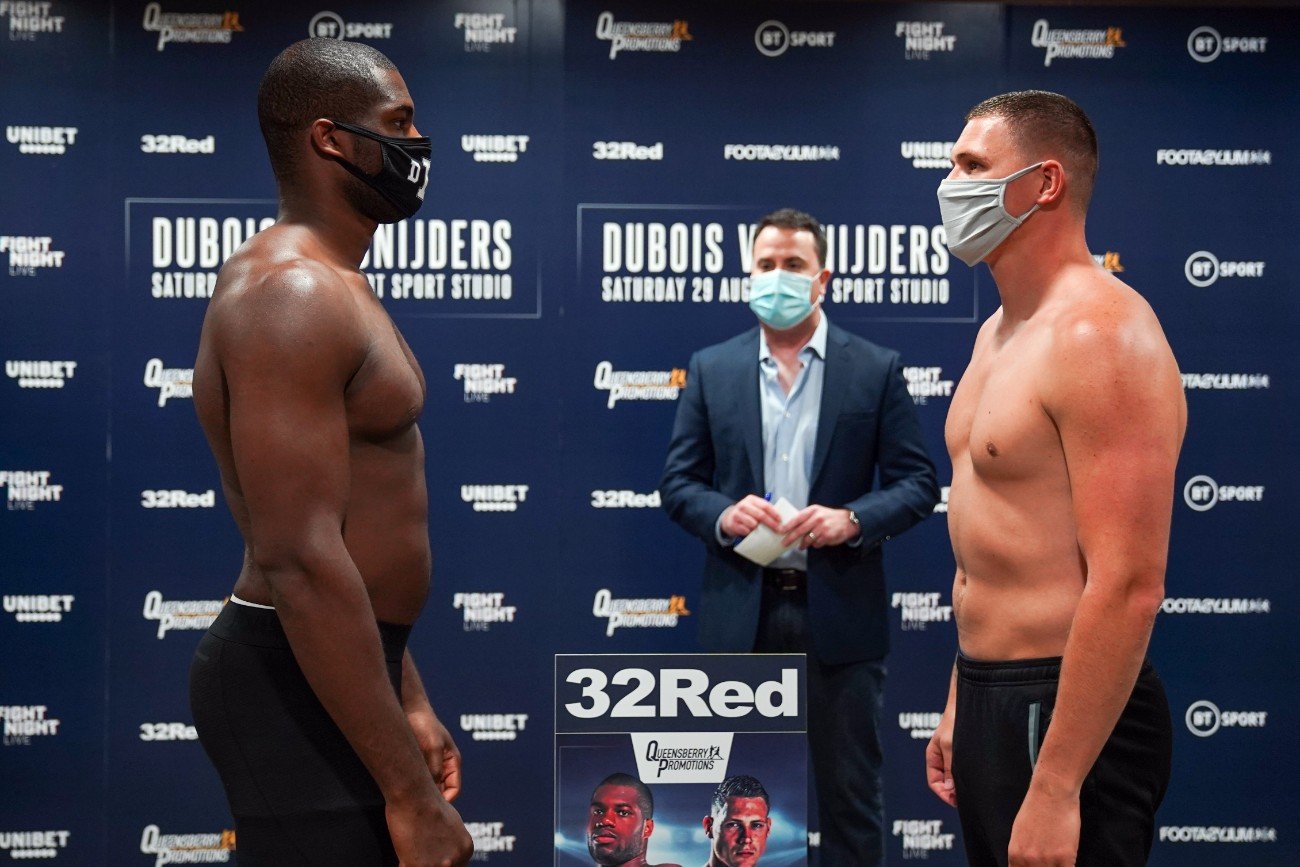 “It’s not a case of ‘who’s Daniel Dubois? What do you get out of that fight?'” said Hearn to Boxing Social when asked if Whyte’s loss to Povetkin makes it less likely that he’ll fight Dubois in the future.

“Daniel Dubois is a really good heavyweight, but he’s fighting Ricardo Snijders on Saturday. No disrespect to Ricardo Snijders, and isn’t he contracted to fight Joe Joyce? So I don’t really understand the call out of Daniel Dubois, and Dillian Whyte is all about.

“He’s [Dubois] got two fights contracted already, and Dillian Whyte is contracted for the rematch with Alexander Povetkin. I think if Dubois keeps winning or if Joyce keeps winning, at some point, they’re all going to fight each other.

Daniel needs to step it up

“Anyone that gets in that elite pack, you’re going to see all those guys fight,” Hearn continued. “But Dubois and Joyce, while I’m sure they have ability and future, you can’t say that Dubois is any kind of elite pack when he’s fighting Ricardo Snijders.

“In fact, he hasn’t boxed anyone yet that is anywhere near the world top 30 of heavyweights. But he’s good, and he will be if he keeps winning. If he beats Joyce, then you can start to have conversations about this guy [Dubois] fighting the top 15 guys.

“Listen, if Dillian Whyte boxes Povetkin and loses, then maybe that’s a fight between Whyte and Dubois sometime next year. 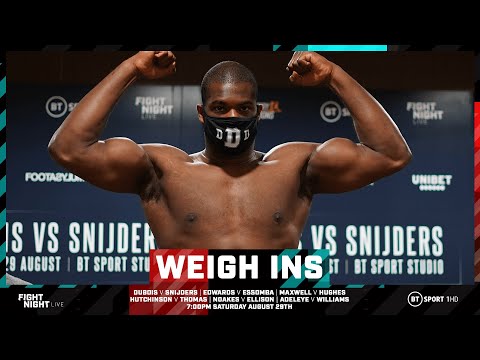 “But I don’t believe he will. I believe he’ll [Whyte] will beat Povetkin, and he’ll be looking for his position as the mandatory for the WBC world title.

It’s not likely that Hearn will let Dubois get a shot at Whyte, whether he wins or loses his rematch with Alexander Povetkin. Even if Whyte gets crushed by Povetkin in the rematch, he’s still a popular fighter, and he’s valuable to Hearn’s Matchroom Boxing stable.

Whyte can make money just Dereck Chisora, who is a journeyman at best. Hearn won’t want to sacrifice Whyte by letting him fight Dubois and get finished off as a name fighter. There are certain guys that are acceptable for the 32-year-old Whyte to lose to, but the much younger Dubois isn’t one of them.