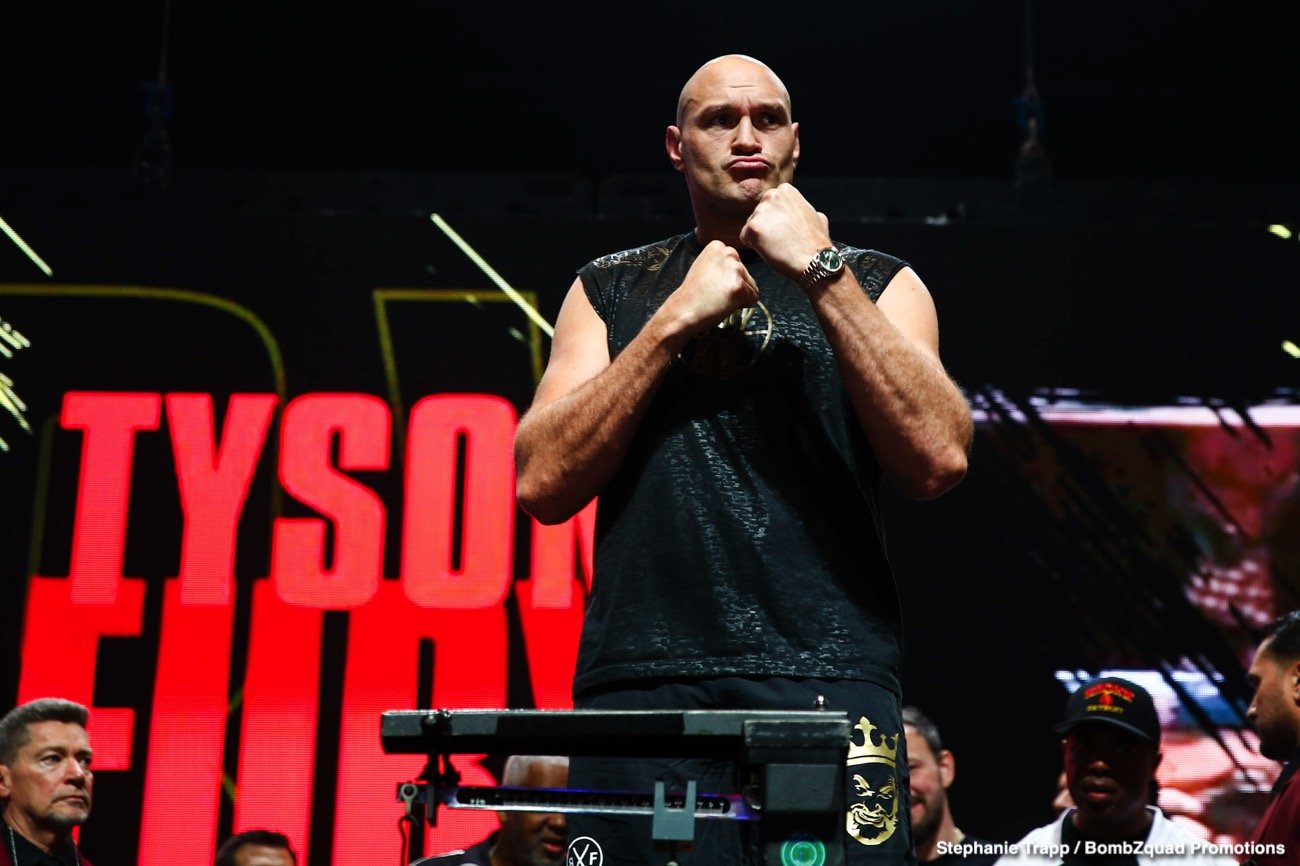 By Charles Brun: After Anthony Joshua made a sixth-round knockout prediction of Tyson Fury earlier on Thursday, ‘The Gypsy King’ has responded with his six knockout predictions. Fury (30-0-1, 21 KOs) is predicting that AJ won’t make it out of the first round.

Unlike Joshua (23-1, 1 KOs), Fury hasn’t been knocked out before during his career, so he’s got the edge when talking about stoppages.

“I would batter Joshua inside the first round,” said Fury on social media.

Joshua needs to build himself back up because his popularity took a big hit in 2019 when he was knocked out in six rounds by American Andy Ruiz Jr in his debut in the States.

AJ’s promoter Eddie Hearn was able to bring him back against an out of shape Ruiz Jr last December, and he promptly outboxed the 283-lb fighter. However, Ruiz had been living it with the millions that he’d gotten from the first fight with Joshua, and he hadn’t taken his training seriously.

The combination of Ruiz’s poor conditioning and the timid way that Joshua had fought prevented him from getting the credit that he so badly wanted from the boing world.

Joshua’s knockout prediction of Fury made on Thursday:

“I have a lot of respect for the man, he’s a good family man and a good fighter. But on the other hand, I want to break his head. First six rounds. I know I’m going to take him out then.” said AJ to @ALOTO.

The last thing that Joshua and Fury need to be talking about right now is their predictions of knockouts of each other. Joshua should have already learned his lesson about overlooking one of his opponents from last year when Ruiz sparked him out in seven rounds at Madison Square Garden in New York in June 2019.

In Fury’s case, he was knocked out by the talented 6’7″ Deontay in the 12th round in December 2018 in Los Angeles, California.

If not for referee Jack Reiss giving a count to Fury, which you can argue that he shouldn’t have, he would have been stopped. Going into that fight, Fury was looking past December towards a mega-match with Joshua.

Fury needs to deal with Wilder

Fury still needs to take on Wilder in their trilogy match before he can share the ring with Joshua. Wilder (42-1-1, 41 KOs) will probably fight in December of this year unless promoter Bob Arum moves the fight to February to take advantage of crowds returning by that point. Who knows what’s going to happen with Fury and Wilder meet for the third time.

While some boxing fans believe Fury will do quick work of Wilder, a lot more see it as a situation where Deontay will avenge his loss. It won’t be hard for Wilder to prepare for the third match with Fury, because the main thing he’s got to be looking out for is his illegal rabbit punches.

It’s evident that Fury will be throwing rabbit shots all night just like last time. If Wilder chooses to bend the rules right along with Fury, we could see some crazy rabbit punching going on next December. If the referee is going to stand around and let the two foul each other for as long as the fight lasts, it could down to which fighter lands the better illegal rabbit punch.

Deontay is going to be motivated to get to Fury’s chin right away in the trilogy match, and he’s not going to let him start quick like last time. Wilder never got started in their rematch last February.

In the third round, Fury hit Wilder with a textbook rabbit punch, and he was out of it from that point on. Wilder’s balance disappeared after that, he was staggering around the ring like he was punch drunk.

Last time it was Fury, but he was the only throwing rabbit shots. To his credit, Wilder was trying to keep it clean, but it was Fury that was throwing the punches to the back of the head while referee Kenny Bayless was standing around doing nothing about it.

It’s strange how in the sport of boxing, referees make a big deal about guarding against low blows, but then they rarely do anything about stopping the much more dangerous rabbit punches.

Anyway, hopefully, the referee that works the Wilder vs. Fury III match is on his JOB and doesn’t let the match turn into a fouling mess like last time these two fought each other.

Ivan Baranchyk vs. Jose Zepeda on October 3 on ESPN »