By Dan Ambrose: The WBO Committee has now ordered Ryan Garcia to fight #2 Emmanuel Tagoe in a final eliminator at 135 to determine that mandatory for champion Vasyl Lomachenko. This move by the World Boxing Organization means that King Ryan (20-0, 17 KOs) has one of two options to choose from for his next fight.

Ryan won’t need to worry about needing to fight WBO lightweight champion Lomachenko (14-1, 10 KOs) because the two-time Olympic gold medalist is expected to move back down to 130 after he faces IBF champ Teofimo Lopez in September.

So instead of Ryan Garcia potentially facing Lomachenko if he beats Tagoe first, he’ll likely be battling for the vacant WBO lightweight belt. However, if Lomachenko chooses to hold onto his WBO title, then you can bet Ryan won’t take that fight and will give up his mandatory status.

If Lomachenko vacates his WBO title, then Ryan Garcia would end up facing one of these guys for the vacant belt:

King Ryan expected to face Tagoe and NOT Campbell

Golden Boy promotes Ryan, and they’re brilliant when it comes to putting their fighters in situations where they know they can win. Lomachenko would be too advanced for the one-dimensional Ryan, and it would be an inevitable loss for the young social media star.

The WBC has already ordered Ryan Garcia and #1 Luke Campbell to fight for the mandatory spot and vacant interim WBC title with the winner getting a title shot against champion Devin Haney.

The more comfortable option for Ryan and his promoters at Golden Boy Promotions are to go in the direction of the WBO route by facing little known Emmanuel Tagoe (31-1, 15 KOs). That’s a far easier fight for the 21-year-old Garcia than for him to take on the 2012 Olympic gold medalist Campbell (20-3, 16 KOs).

Garcia could lose to the older and far more experienced 32-year-old Campbell, and Golden Boy will likely steer him in the direction of Tagoe instead. There are risks involved in Ryan fighting the 31-year-old Tagoe as well, but not nearly as many than if he takes on the battle-tested Campbell.

On Sunday, Ryan’s reaction to Campbell’s trash, talking to him on social media was one of restraint. Instead of firing back and telling Campbell that he was going to thrash him, Ryan seemed unmotivated. After looking at Ryan’s reaction, it was clear that he won’t be fighting Campbell. If Ryan were, he would have been all over him the way he’s been in the past with his opponents. 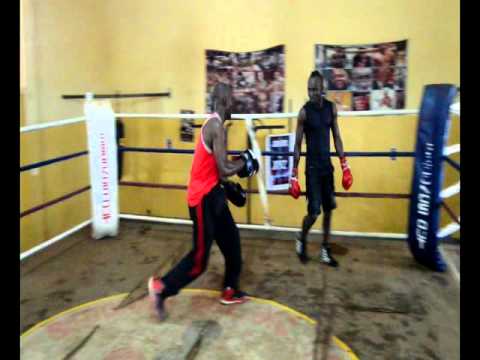 Other than those two guys, Tagoe’s resume is littered with fighters that even the most knowledgable hardc0re boxing fan has never heard of before. Tagoe’s only career loss came in 2004 in a fifth-round stoppage defeat to Lante Addy (8-6) in June 2004. Since that defeat, Tagoe has reeled off 31-consecutive wins over lesser opposition.

The WBO has come to Ryan’s rescue with them ordering him and Tagoe to fight because now he can back out of the Luke Campbell fight with an excuse. Ryan can say that he’s looking to go after WBO 135-lb champion Vasily Lomachenko, and some fans will buy into it.

Jose Pedraza: Can he thrive at 140? Robeisy Ramirez needs to improve »