By Chris Williams: Terence ‘Bud’ Crawford is willing to face Shawn Porter in his next fight. Crawford (36-0, 27 KOs) needs an opponent for him to be able to fight in 2020, and thus far, his promoter Bob Arum hasn’t found him one.

The pandemic has complicated things, as it’s made it impossible for big-boxing matches involving the world champions. Crawford, 32, hasn’t helped though with him saying that wouldn’t take a pay-cut for fighting behind closed doors.

It seems that Terence has changed his mind about the subject of pay-cuts and fighting behind closed doors. Crawford is now saying that he might agree to a pay-cut depending on the opponent he’s fighting.

These are the options for Crawford’s next fight:

You can forget about Spence and Pacquiao agreeing to fight Crawford in 2020 because that’s not going to happen during the pandemic. Crawford’s real options are Porter, Brook, and Ugas. Brook is from the UK, which makes it unlikely that he’ll be selected due to the difficulties in traveling. 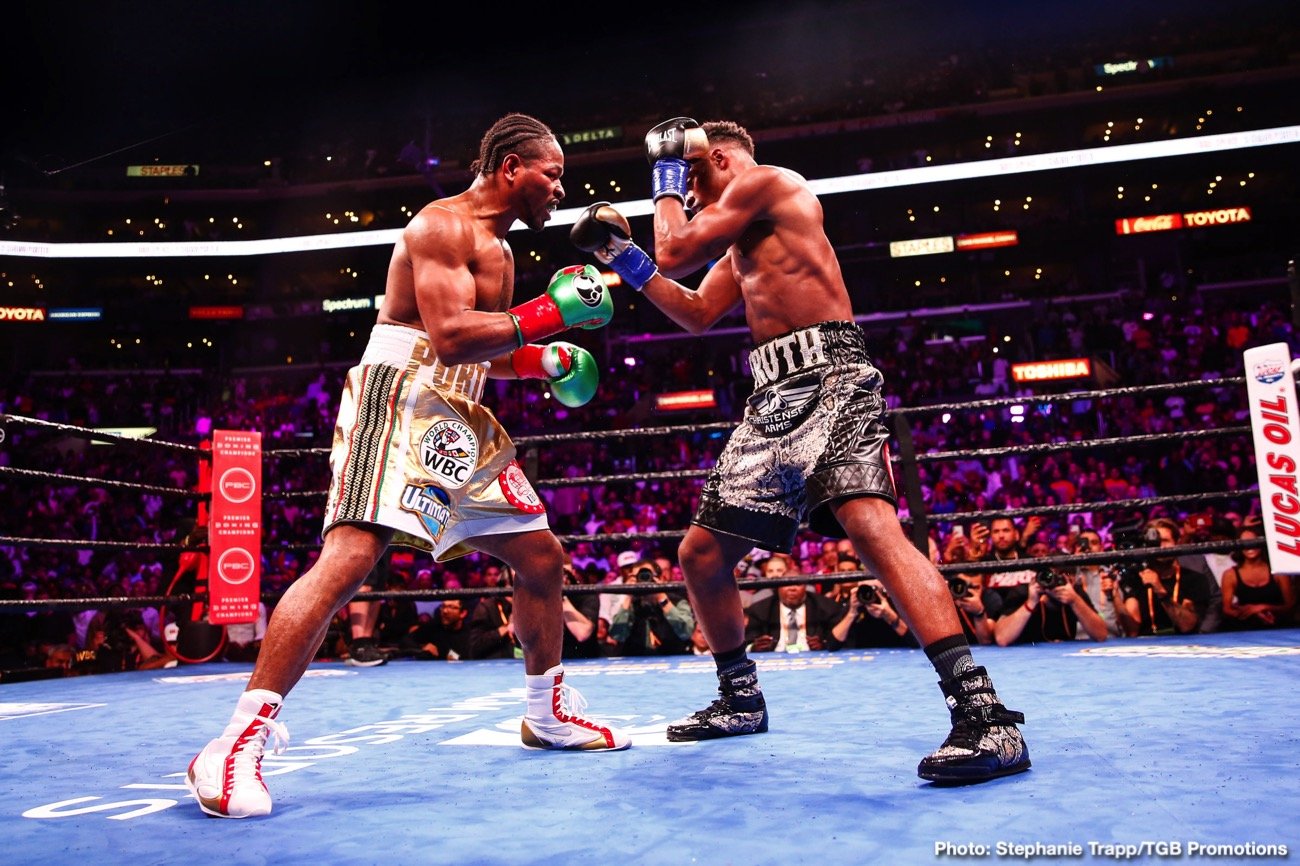 Ugas and Porter (30-3-1, 17 KOs) are the two that Top Rank may choose from for Crawford’s next fight. Sergey Lipinets is another name that has been mentioned as an option as well for Crawford, but that would lead to criticism of Terence if he picks him.

That would be a similar opponent as Crawford’s last foe Egidijus Kavaliauskas. Boxing fans want to see Crawford step up against quality opposition, as he’s been facing mostly mid-level fighters since his win over Yuriorkis Gamboa in 2014.

Bud willing to take a pay-cut

“My contract states I’m not taking no pay-cuts. If we have to fight for the minimum, so be it,” said Terence Crawford to ESPN when asked if he won’t take a pay-cut to fight without a crowd.

“But as far as a pay-cut, it depends on who we’re fighting. Manny Pacquiao is a fight that we’re still currently looking forward to getting. Like I said, the pandemic has messed up a lot of things as far as money.

“With the fans unable to come see the fight, I don’t know how that’ll fare against any top welterweight in the division. When you look at the whole landscape of the whole thing, it’s going to come down to money. And if you can’t provide the proper money for each fighter, then how is that going to make the fight happen?” Crawford said.

We’ll see if Crawford is serious about wanting to take a pay-cut for his next fight. He says he’s willing to do it now, but when push comes to shove, he may change his mind.

“Errol has stated that he’s fine; he’s training, and nothing is really wrong with him,” said Terence. “He’s preparing himself for Danny Garcia,” said Crawford. “So after this fight, we’re all going to get a glimpse of how he’s going to react coming off of that magnitude.

“And being that he’s taking on a tough opponent in Danny Garcia because Danny is by far no walk in the park for anybody. So we’re all going to get our answers from fight night with him, and Danny share the ring together,” said Crawford.

Spence and Danny Garcia will be fighting in September or October. Garcia will be the first fight back for IBF/WBC welterweight champion Spence since his car crash on October 10.

If Spence looks terrible, it’s a lose-lose situation for Crawford. That probably means that Spence will need additional tune-up fights to see if he can come back from the crash.

It’s fantastic that Crawford is finally willing to talk pay-cuts for his next fight, considering that if he doesn’t, then he’ll probably sit for the remainder of 2020.

Top Rank can’t afford to pay Crawford the same type of money that he was getting before the pandemic. Without crowds to attend live boxing events, it’s impossible to get the gate money that was there before.

If Terence chooses to be stubborn about it and wait until crowds are allowed back into fights, he could be waiting a long, long time. We’re talking 2021 or 2022. There’s still no vaccine on the market for the pandemic. 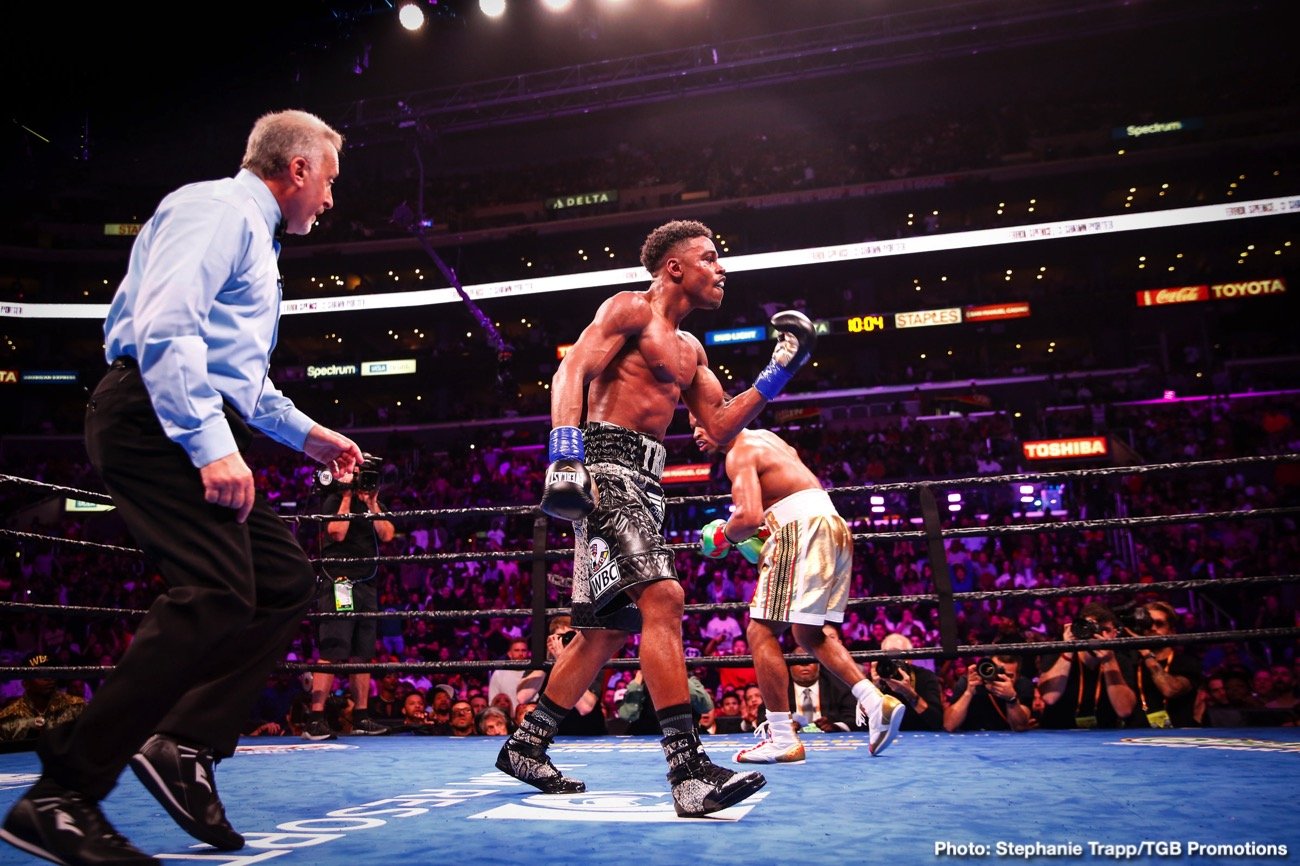 Although they have several vaccines that are going through testing, they may not work. Also, there a lot of anti-vaccine Americans that will refuse to take it. The pandemic could linger even after the vaccine is produced.

“That’s a good fight,” said Crawford when asked if he’d be interested in facing Shawn Porter. “If that’s a fight that he wants to pursue, we can talk about it, and so be it.

“I don’t duck no fighter. I never turned down no fighter, so I won’t stop now. My whole thing was I’m looking for the titles, and I’m trying to become undisputed. Me and Shawn are good friends.

“My whole thing was before he lost to Errol Spence, there was no mention of, ‘Let’s have a unification fight’ or no nothing. So I feel some type of way about that. It don’t matter. We all got to fight each other. I want to fight everybody,” Terence said.

It would be a good idea for Crawford to take the fight with Porter now in 2020 rather than facing Ugas, who arguably beat Shawn last year. Ugas is the harder fight for Crawford than Porter is, and he might lose.

Porter, 32, will be a hard fight for Terence as well because he’s an excellent inside fighter, and that’s going to force Crawford to battle in an area that he’s not accustomed to.

Crawford likes to stay at medium to long-range so that he can land his counter punches, and control the action with his jabs. If Porter smothers Crawford on the inside, then there won’t be any jabs or counter-punching from Terence. Those elements from his game will be taken away.

Also, the gimmicky changes of stances that Crawford uses won’t happen. He’ll be forced to fight Porter in the trenches at close range for 12 long rounds.  Crawford’s punching power won’t be a factor because he’s not a big puncher on the inside.

“Crush him, it’s that simple,” said Crawford in response to being asked if he’d be interested in fighting Jose Ramirez. “Whenever he’s ready, I’m going to crush him,” said Crawford.

WBC/WBO light welterweight champion Jose Ramirez (25-0, 17 KOs) wants to move up to 147 in 2021, but that’ll depend on how he does against Josh Taylor. Ramirez will be fighting Taylor this year in a unification match. Before that, Ramirez will be defending against his WBC mandatory Viktor Postol.

If Everything goes well for Ramirez against Postol and Taylor, then he’ll move up to welterweight next year. It’s not a given that Jose will win either of those two fights, though. Taylor has a lot of talent, and he’s going to be a real problem fr Ramirez.

When Ramirez does move up to welterweight, he likely won’t face Crawford right away. You can expect Ramirez to take a couple of fights at welterweight to get acclimated before he looks to challenge Crawford for his WBO belt. By that time, Crawford may no longer be champion because he could lose to Ugas, Porter, or Spence by that time.

Hopefully, Crawford decides to fight somebody in 2020 rather than sitting on the shelf, getting older, and wasting what little time he has left in his career.

If Crawford chooses to wait until crowds are cleared to return to boxing events, it could take ages.