Ryan Garcia to Luke Campbell: ‘You’re not fooling anyone’ 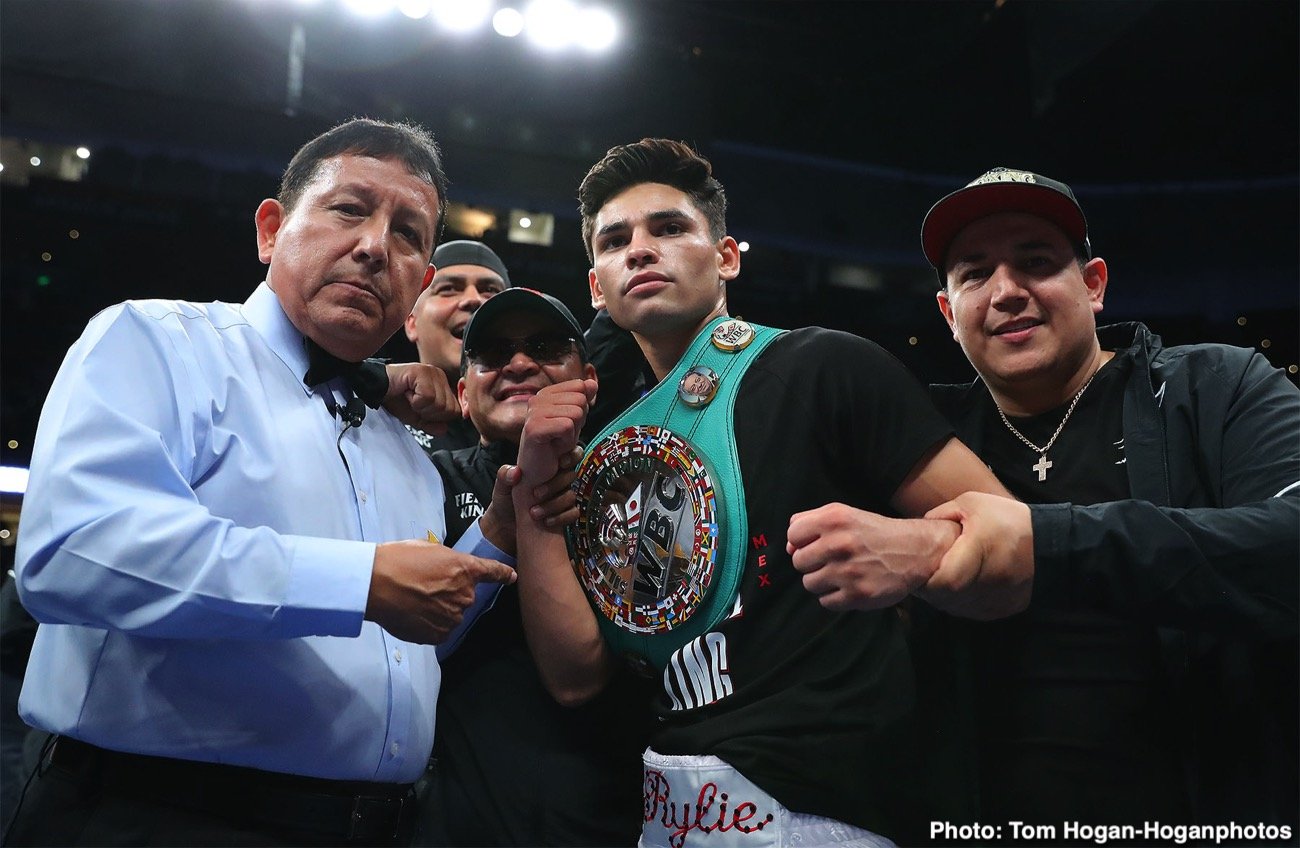 By Sean Jones: Ryan Garcia fired back on Luke Campbell on social media on Friday in response to him predicting a knockout victory over him in their still unscheduled fight. Campbell (20-3, 16 KOs).

Campbell-Garcia is still being negotiated. The date and venue are expected to be announced soon for this essential lightweight contest. The winner of the fight will face WBC 135-pound champion, Devin Haney.

It’s possible that Ryan could fold under pressure from Campbell, and see his career implode. All that hard work that Golden Boy Promotions has put in with them carefully matching King Ryan will have been wasted.

King Ryan says he watched Campbell’s fights, and he’s not impressed with what he saw. Campbell lost his last contest to Vasily Lomachenko, but he was competitive the entire way last year.

The other two defeats Campbell has suffered were against Yvan Mendy and Jorge Linares.  If Ryan isn’t able to fight better than he showed in his questionable win over Carlos Morales in 2018, he’ll lose to Campbell.

Garcia was giving ground continually against Morales, and all he could do was hold repeatedly. The power from Garcia’s left hook went away in the second half of the contest, as his pencil-thin legs looked rubbery from the pressure Morales was putting on him.

Ryan has got the power and speed working for him, but that might not be enough for the experience and the pedigree of the 32-year-old Campbell. 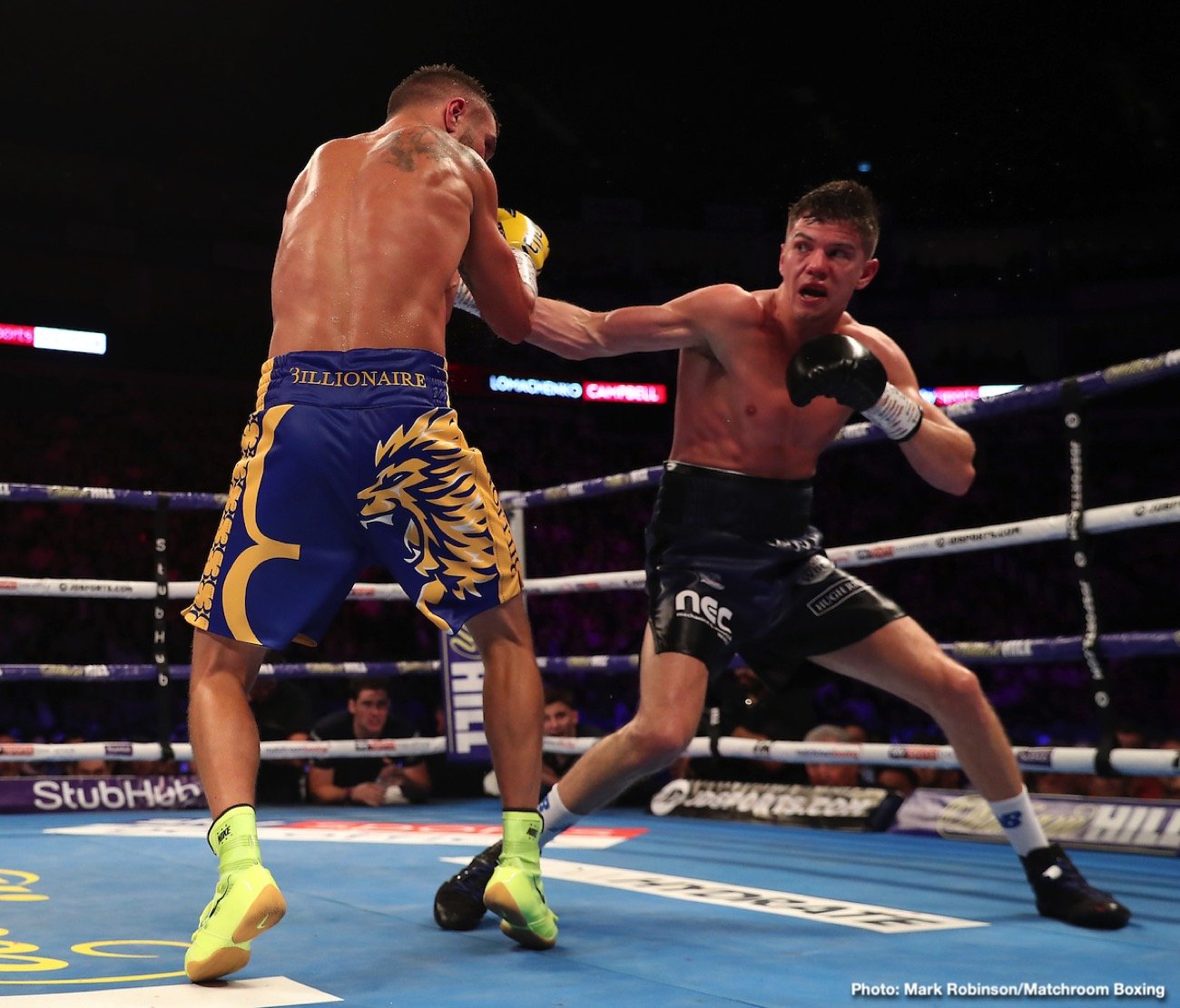 “‘Campbell vs. Garcia, who you got?’May the best man win, that’s a 50-50 fight,” said Teofimo Lopez on social media. “I still think Campbell might have the edge, though. Yeah, I sparred with Campbell.

‘I heard a lot of s*** people are talking about. It’s crazy how the word goes back around, and when it hits you, you’re like, ‘that ain’t really what happened,'” said Teofimo.

IBF lightweight champion Teofimo Lopez is aware of the talent that Campbell possesses, as he’s sparred him before. The rumors are that Campbell gave Teofimo a lot of problems during the spar. The 22-year-old Teofimo isn’t saying what went down, but it’s believable that Campbell got the better of him.

“It’s been ordered, and I’ve heard that Garcia has accepted the fight,” said Campbell to Fight Disciples. “Now it’s down to the promoters to finalize dates, venues, numbers. I think it’s just down to them guys now to sort the rest out.

“It shouldn’t be too difficult to make,” said Campbell on the Ryan Garcia match. ‘I want the fight, and he’s accepted the fight. Great, let’s get it on. Listen, I believe, other than Lomachenko, I’m the best lightweight in the world. He wants to challenge me, and I’m excited about this opportunity, and I’m ready to show the world how good I am.

“I certainly wouldn’t rule the UK out as an option,” Campbell said. “I think that would be a mega-fight in the UK, a big fight, and I’d love for it to be in the UK. But I think it definitely could be in the running for it,” Campbell said.

“I think he’s [Ryan] in the top seven,” said Luke. “The lightweight division is jam-packed with names and talent, not just ability, but well-known big names. So certainly, he’s in the top seven.

‘You couldn’t put him in the top four because he doesn’t have a belt and he’s not beaten any former world champion or anybody like that. But him coming in with me a massive exciting fight. We’ll see what he’s made of, and I’ll show you what I’m made of.

“When I was 21-years-old, I wasn’t physically mature enough to be in with big strong men and doing 12 rounds,” Luke Campbell said. “Now, I’m a little bit older, but I’m not physically.  I feel like I’m a 24-year-old fresh with not many miles on the clock, and reaching my peak now and feeling strong and good in myself.

“I’m reaching my peak later on in life than guys are reaching it earlier than I have. I think by the end of September, we should be allowed small crowds at venues by then. Fingers crossed that everything goes as planned, and we can have an audience,” said Campbell.

Will Ryan agree to fight Campbell in the UK? You have to doubt that because it would put Ryan in a wrong position that he might not be mentally ready for. Unless Golden Boy was looking to teach Ryan a lesson, they wouldn’t want him fighting in England in front of a potentially large crowd.

Boxing fans will be allowed back into sporting events by October, and that means we could see a big crowd for Campbell-Garcia.