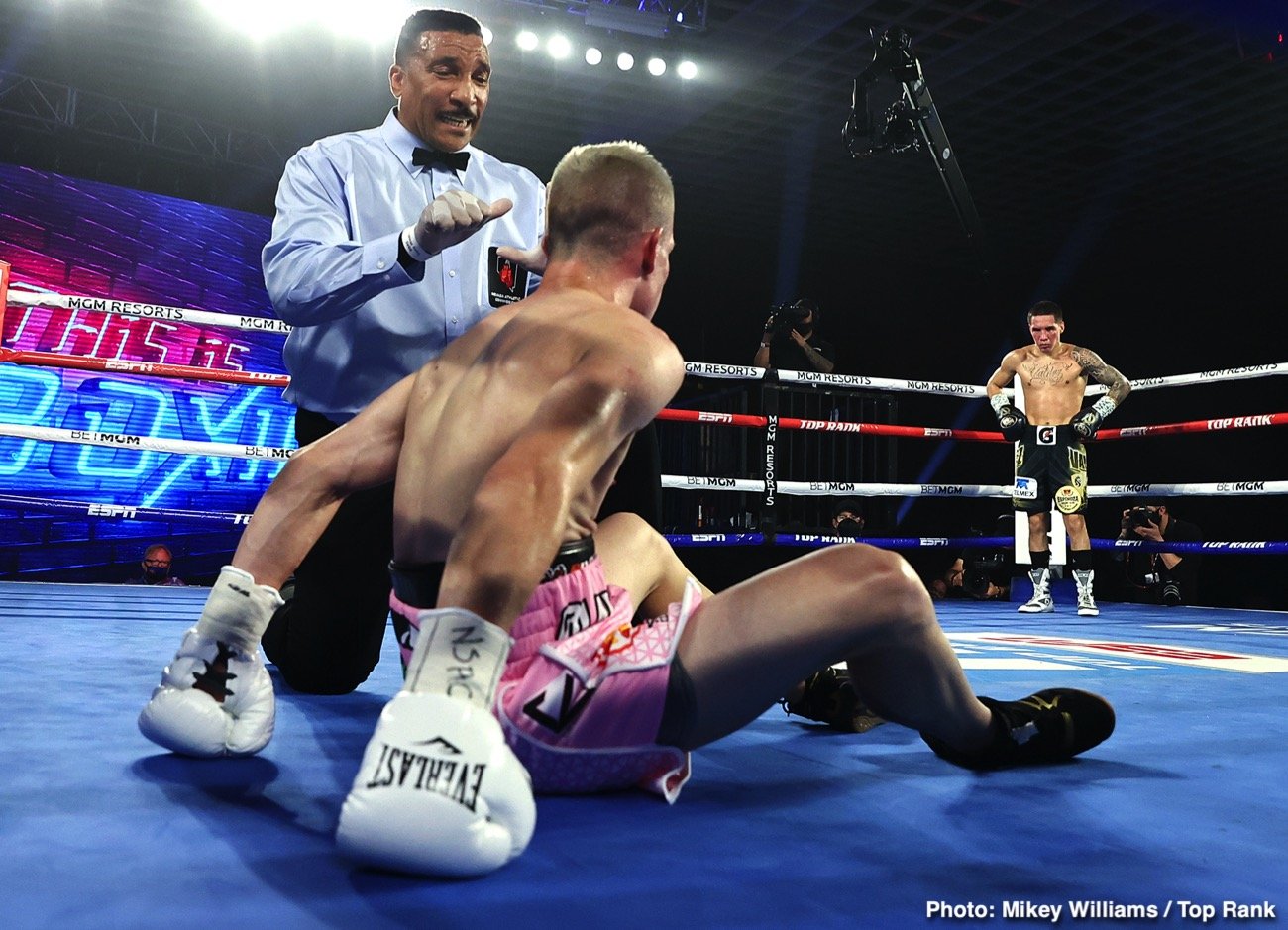 By Mark Eisner: Oscar Valdez (28-0, 22 KOs) had a tougher time than expected tonight in stopping former three-time world title challenger Jayson Velez (29-7-1, 21 KOs) in the 10th round on Tuesday night at the MGM Grand in Las Vegas, Nevada.

Valdez knocked Velez down twice in round ten to get the stoppage. Referee Tony Weeks put a stop to the fight after the second knockdown. The time of the stoppage was at 2:23 in the 10th.

The first knockdown in round ten was from a booming left hook that put Velez down on the seat of his pants. He was still hurt when he got back up. Moments later, Valdez hit Velez with a sweeping right hand that sent him down alongside the ropes. Weeks then stopped the fight.

Velez was also knocked down in round five. He was continually walking into Valdez’s left hook with his guard down, and he was getting shaken up from those shots.

It’s troubling that Valdez had so many problems with the 32-year-old Velez tonight, as this was supposed to have been a one-sided fight. Velez was competitive throughout the contest, and you can argue that he should have been allowed to continue after the second knockdown.

He likely would have made it out of the round if not for the referee Tony Weeks hastily stopping it.

Velez showed that he’s still a pretty good fighter with his jabbing and the way he mixed up his punches. He needed to be more aggressive against Valdez and shown more of a sense of urgency tonight for him to have had a shot at winning. Velez let Valdez be the aggressor, and that cost him the fight.

Valdez doesn’t look ready to take on Miguel Berchelt next, but the fight is probably going to be made. Going off tonight’s performance, Valdez won’t see the sixth round against Berchelt. He’s not in the same talent class as him.

It would be a good idea for Valdez to move back down to 126 after he faces Berchelt. Valdez can still rebuild his career after the Berchelt fight if he moves back down to 126. If you’re Top Rank, you might want to reconsider the idea of letting Valdez anywhere near Miguel Berchelt. 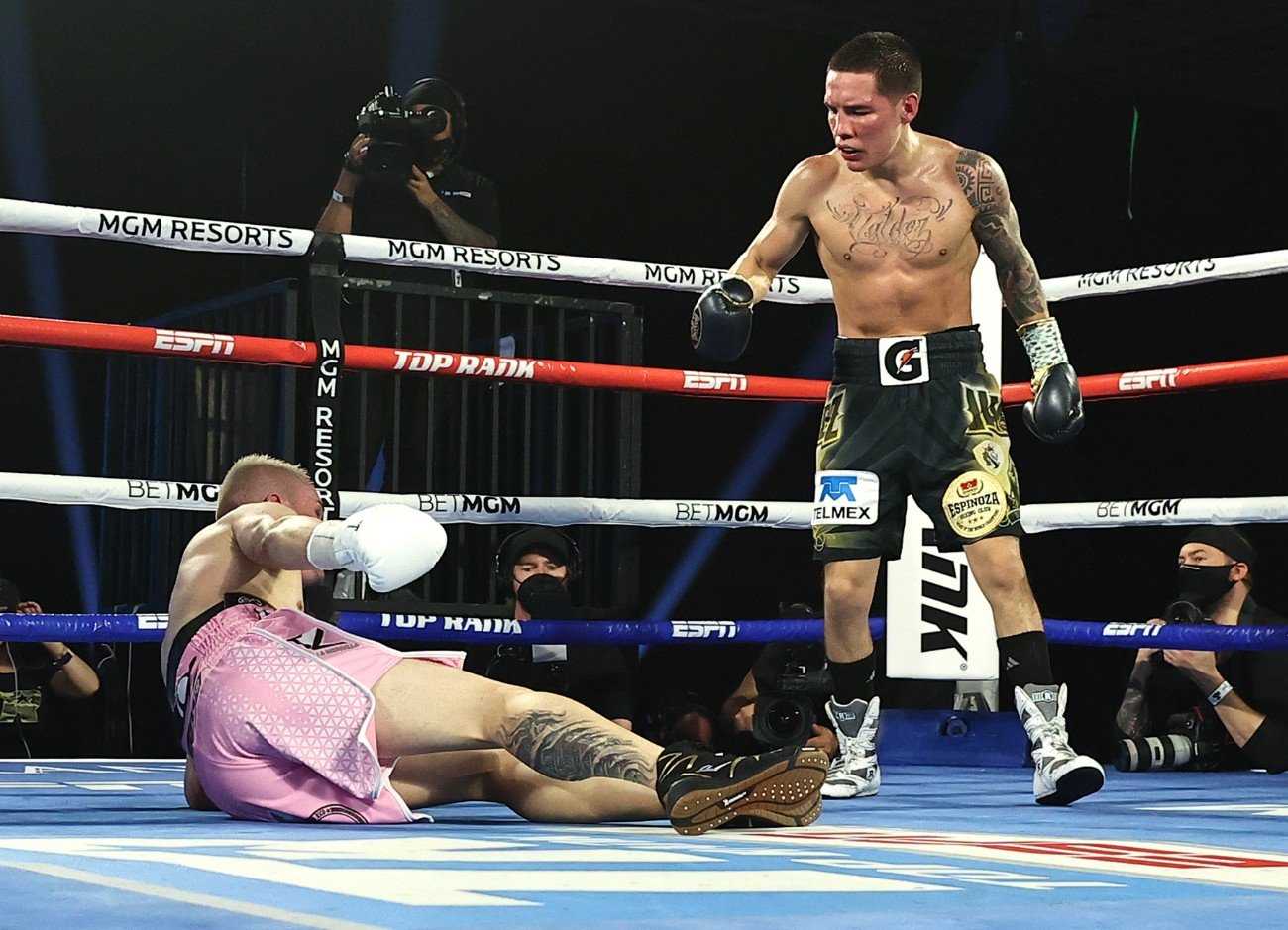 126 is perfect for Valdez

It would be far better for Top Rank to persuade Valdez to move back down to 126 and go after WBA secondary champion Can Xu. That’s a winnable fight for Valdez and would make him a belt holder without needing to risk a loss by taking on Emanuel Navarrete.

At 130, Valdez’s punching power isn’t the same, and he’s not going to do well against all the talented guys in this weight class. Shakur Stevenson is now fighting at super featherweight, and you would have to favor him to beat Valdez quite easily after tonight’s performance.

The Velez bout could be the last roadblock for Valdez, 29 before he takes on WBO super featherweight champion Miguel Berchelt later this year.

In an impressive display of raw punching power, undefeated super middleweight KO artist Edgar Berlanga (14-0, 14 KOs) defeated Eric Moon (11-3, 6 KOs) by a first-round knockout.  The fight was stopped a little over a minute into the first round at 1:02.

“We prepared to go rounds, but I got him hurt and got him out of there,” said Berlanga after stopping Moon. “I still have so much room to grow as a fighter.

“The power is there, but I will show everyone that I am a well-rounded fighter. The knockout streak is cool, but there is more to me than first-round knockouts.”

Berlanga needs more experience before he’s matched against one of the world champions at 168. He’s got the talent to beat WBO 168-lb champion Billy Joe Saunders right now, but he would struggle against David Benavidez, Callum Smith, and Caleb Plant.

Fighting for the first time in 14 months, former WBO super bantamweight champion Isaac Dogboe (21-2, 15 KO) dominated and stopped journeyman Chris Avalos (27-8, 20 KOs) by an eighth-round knockout in a scheduled eight-round bout in featherweight action on the Valdez vs. Velez undercard. A point was deducted from Dogboe in round five for hitting low.

Referee Russell Mora jumped in a little prematurely in stopping the fight with Dogboe, 25, pounding on the hapless 30-year-old Avalos in the eighth. Mora could have waited a little longer before jumping in, but it wouldn’t have made a difference. Dogboe was still going to win the fight and likely stop Avalos. 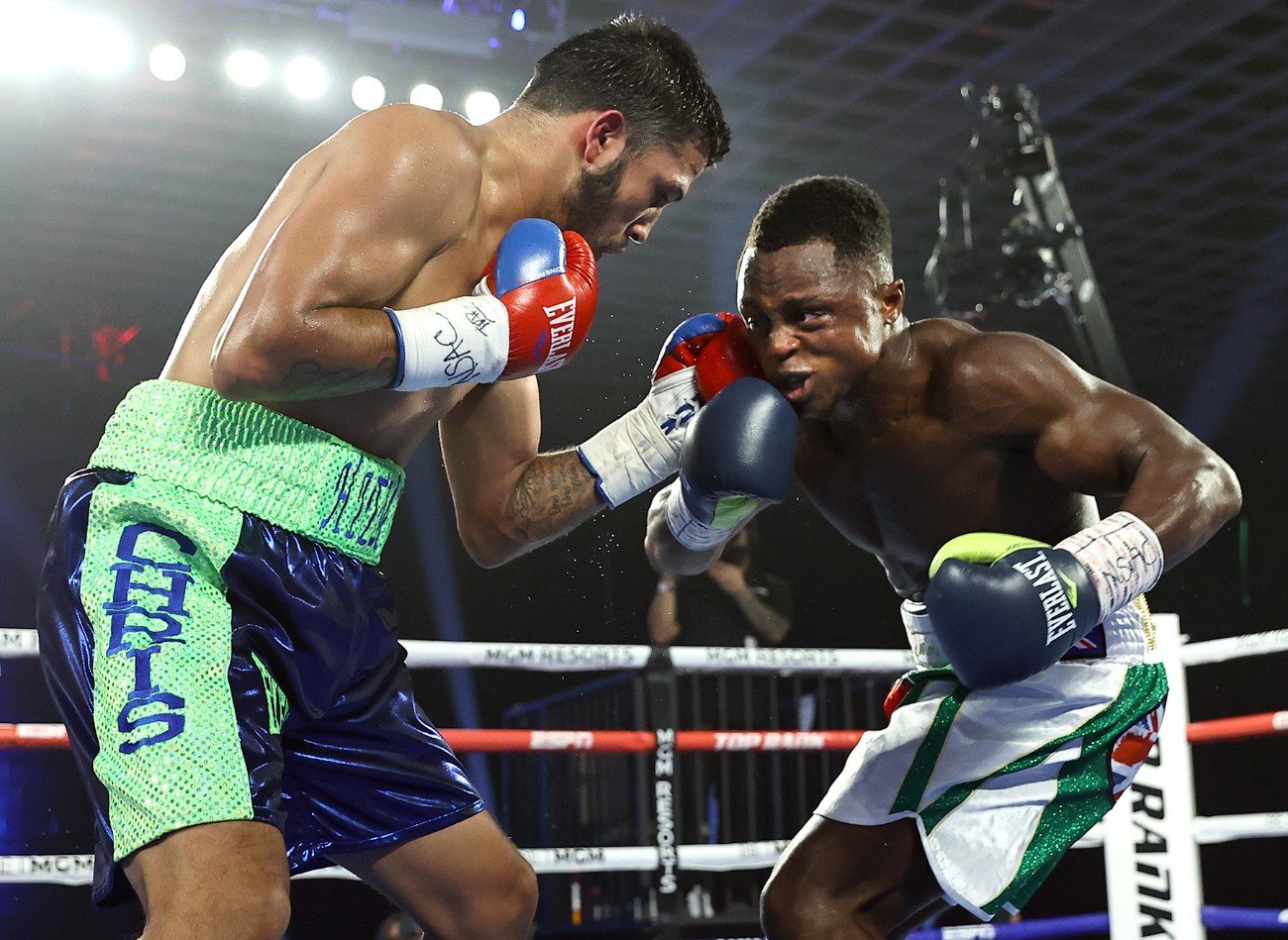 The time of the stoppage was at 2:25 of round eight. Avalos has now lost six out of his last eight fights since 2015. He’s an example of what can happen to a fighter when their management throws them into repeated tough fights without giving them a chance to build up their confidence.

Avalos was an excellent earlier in his career, but he’s gone downhill since 2015, thanks to the hard match-making that’s been one for him.

For Avalos’ sake, hopefully, the money he’s made has been good along the way because he’s been run through a gauntlet in the last five years. Avalos’ only wins during that time frame were against Rey Perez and Miguel Flores.

Beating Flores shows what kind of talent that Avalos still has, but he can’t keep losing like what we saw tonight for him to turn things around.

Dogboe was fighting for the first time since losing consecutive fights to Emanuel Navarrete at 122. He lost his WBO super bantamweight title to Navarrete by a 12 round unanimous decision in December 2018. In their rematch last year in May 2019, Navarrete stopped Dogboe in the 12th round.

The way that Dogboe fought tonight, he needs to think about going back down to 122 because he lacks the size and the power for the 126-lb division. Dogboe lost twice to Navarrete because he lacked the size at 122 to beat him, but now he’s made things worse for himself in going up to 126.

If Dogboe doesn’t move back down to 122, he’s going to be overmatched against the likes of Gary Russell Jr, Josh Warrington, Can Xu, and Navarrete.

Undefeated light welterweight prospect Elvis Rodriguez (8-0-1, 8 KOs) stayed unbeaten with a second-round stoppage win over Dennis Okoth (4-4-1, 2 KOs). The time of the stoppage was at 2:33. Rodriguez landed a big left hand to the head of Okoth to score the knockout.

The 24-year-old Rodriguez comes from the Dominican Republic, and he’s excellent power, but he’s not ready for the upper-tier fighters at 140. Top Rank obviously knows that, which is why he’s being fed weak opposition at this early juncture of his career.

Hopefully, for Rodriguez’s sake, he’s learning from these mismatches because he’s going to need to raise his game when he gets in there with the highly skilled 140-pounders. 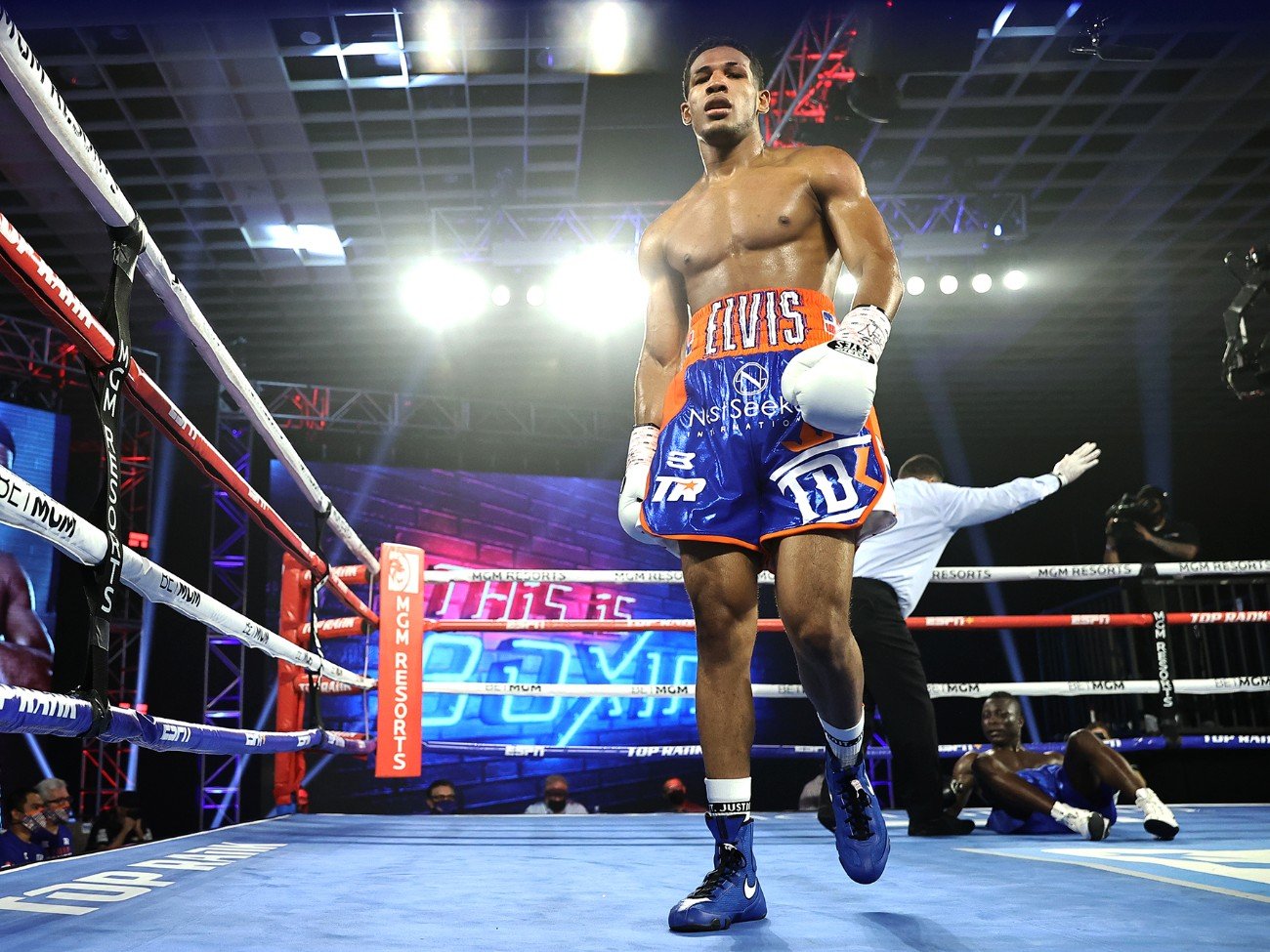 Oscar Valdez will be battling Jayson Velez tonight in the main event on ESPN at The Bubble in Las Vegas, Nevada. Valdez (27-0, 21 KOs), an eight-year pro, will be competing for the second time at 130 is going up against tough Puerto Rican fighter Velez (29-6-1, 21 KOs)

Eggington vs Cheeseman on August 1, LIVE on DAZN »