Statements from A. Serrano and manager regarding a demand from Eddie Hearn 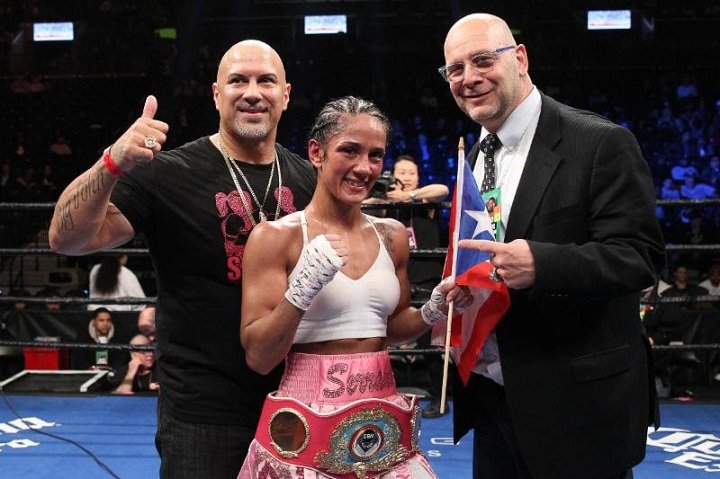 Since last year, Amanda Serrano and Katie Taylor were scheduled to face off in a mega bout, but changes in logistics, caused by the COVID-19 pandemic and constant wavering in the purse keep delaying the fight.

“In March, we received $10,000 to be used for training expenses for the Taylor fight, which was previously scheduled for May 2nd. With that money we hired a new trainer to help us in the technical aspects, hired sparring partners so we knew we wouldn’t miss out on any sessions. We also hired a nutritionist to make sure we maintained the weight up while training hard because 135 lbs isn’t Amanda’s natural weight while training hard she goes way under. Our new assistant trainer Gary Starks Sr. is out of Staten Island and those trips require a $19 daily tolls”. Jordan Maldonado Said.

“Yesterday (Wednesday) we were notified by our promoter Lou DiBella that Eddie Hearn wants that 10k back by tomorrow Friday at 5pm. He seems not to care we trained not only from March till May but also for his rescheduled date of July 4th. Another date where he canceled without an accurate explanation”

“Now because we didn’t accept his offer after the July cancellation of taking a purse deduction & a change of venue to literally fight in his Backyard at one of his homes, he’s being disrespectful & vindictive”, Maldonado stated.

Amanda Serrano said: “I’ve lost two lucrative opportunities to fight in an MMA match and another to participate in the Exatlón competition waiting for Katie Taylor. The first dates were postponed because of issues on their side, not ours, and now I’m to blame? Signing with Matchroom Boxing has been stagnant to my career because I debuted with them in January 2019, made history, and I didn’t fight again until September. We just ask for respect and transparency. Their organizers say that the fight will be the biggest in women’s boxing, but their actions show the opposite”.

“He sent a cease and desist letter to Telemundo which were to air the show Exatlón stopping me from competing and making money and turns around to ask for a refund of spent money I used to train for canceled fight dates”.

“I’ve read from many that Mr. Hearn was a horrible person. Now I know first hand he’s actually worse than that. I’m a firm believer in God and know he doesn’t like ugly. To my Island and my fans I Love you and promise just like our island is resilient “So Am I!” We will Be back 🙏❤️”

Amanda Serrano, the nine-time world champion in seven different weight classes of Puerto Rico, was scheduled to fight the undisputed 135-pound champion Katie Taylor of Ireland, since last year. However, due to differences in negotiations, the mega fight won’t take place.

“On four occasions, Amanda has signed on for the fight”, said Serrano’s manager/trainer Jordan Maldonado. “She signed to fight in late 2019 in New York, but Taylor opted to move up in weight. Then we accepted the fight for early 2020 in the same city, but Taylor’s team thought they needed more time to train and it was move to May 2 in England, but then a month and a half later, the COVID-19 pandemic came and it was moved to the 4th of July; all this, accepting a purse not up to par with the magnitude of the fight. But since Amanda wants to make history for Puerto Rico, we happily accepted”.

“Now they’re offering us the fight for August but removing almost 50% of Amanda’s purse. However, they are taking less from Taylor. We understand there is a situation around the world with COVID-19 and there are changes in the boxing platform, but big fights are big fights”, said Maldonado. “Many important fights are delayed until fans can come back to attend the events. If we accept this new offer, we’d be creating a new negative precedent in female boxing, after so many women have worked so hard to heighten the level of the sport”, added.

Amanda Serrano believes that “by November or December of last year, those 135-pound division belts would be parading around the streets of my beautiful island of Puerto Rico, but Taylor moved up for one fight and that hurt me, because I dream of historic fights and suddenly they disappear. Currently, I’m being offered a very low purse, as if I was starving to death. Throughout my career, I’ve sacrificed earnings to stay active in boxing, but now my achievements speak for themselves and I’m staying firm”.

Maldonado reiterated: “Amanda’s contract with promoter Lou DiBella expires soon. We hope they do their job because boxing needs this fight and if we have to wait, we wait. Amanda is a WBO world champion at 126 lbs, and interim WBC world champion. There are good unification bouts in Amanda’s weight class that can be made in the meantime”.

Boxing » Katie Taylor » Statements from A. Serrano and manager regarding a demand from Eddie Hearn