By Charles Brun: Tyson Fury isn’t worried about the threat that Deontay Wilder presents to him going into their trilogy match in December. Fury (30-0-1, 21 K.O.s) says Wilder (42-1-1, 41 K.O.s) only has a punchers chance, which is about as good as any heavyweight in the division has against him.

The cocky Fury is still drunk on the success of his second fight with Wilder, and he can’t imagine himself not winning. That victory went to Fury’s head, and he now sounds like he feels he’s infallible. It’s Wilder’s job to bring Fury back down to earth to make him realize that he’s not the fighter he thinks he is.

Wilder’s job is to humble Fury

It’s up to Wilder to put Fury back in his place and to humble him by sending him down to the first defeat of his career. Wilder knocking out Fury might do some good in the long run because he’s running amok with his mouth lately, saying he’d beat all the great heavyweights in the sport.

Fury’s win over Wilder last February may have knocked something out of whack with his thought process for the Gypsy King because he’s not the same person now.

Fury plans on sticking with the same trainers that guided him to victory in his second fight against Wilder, 34, last February. In other words, Fury will stick with Andy Lee and Kronk Gym trainer Sugar Hill.

It makes sense for Fury not to dump his training team after his spectacular seventh-round knockout win over Wilder four months ago in Las Vegas, Nevada.

What’s interesting is Fury wants to potentially add Wilder’s coach Mark Breland to his team as an additional trainer if he fires him. Wilder hasn’t said anything recently about replacing Breland, so we have to assume that he’ll continue to coach him and work his corner during his fights.

Fury told IFL TV that he bring Breland in as a new trainer if Wilder lets him go. There was speculation that Wilder would release Breland due to him throwing in the towel in his rematch with Fury last February, and he wasn’t happy about it.

It would be a wrong move on Wilder’s part to fire Breland because the boxing world has backed the coach, saying that they believe he made the right move in stopping the fight. 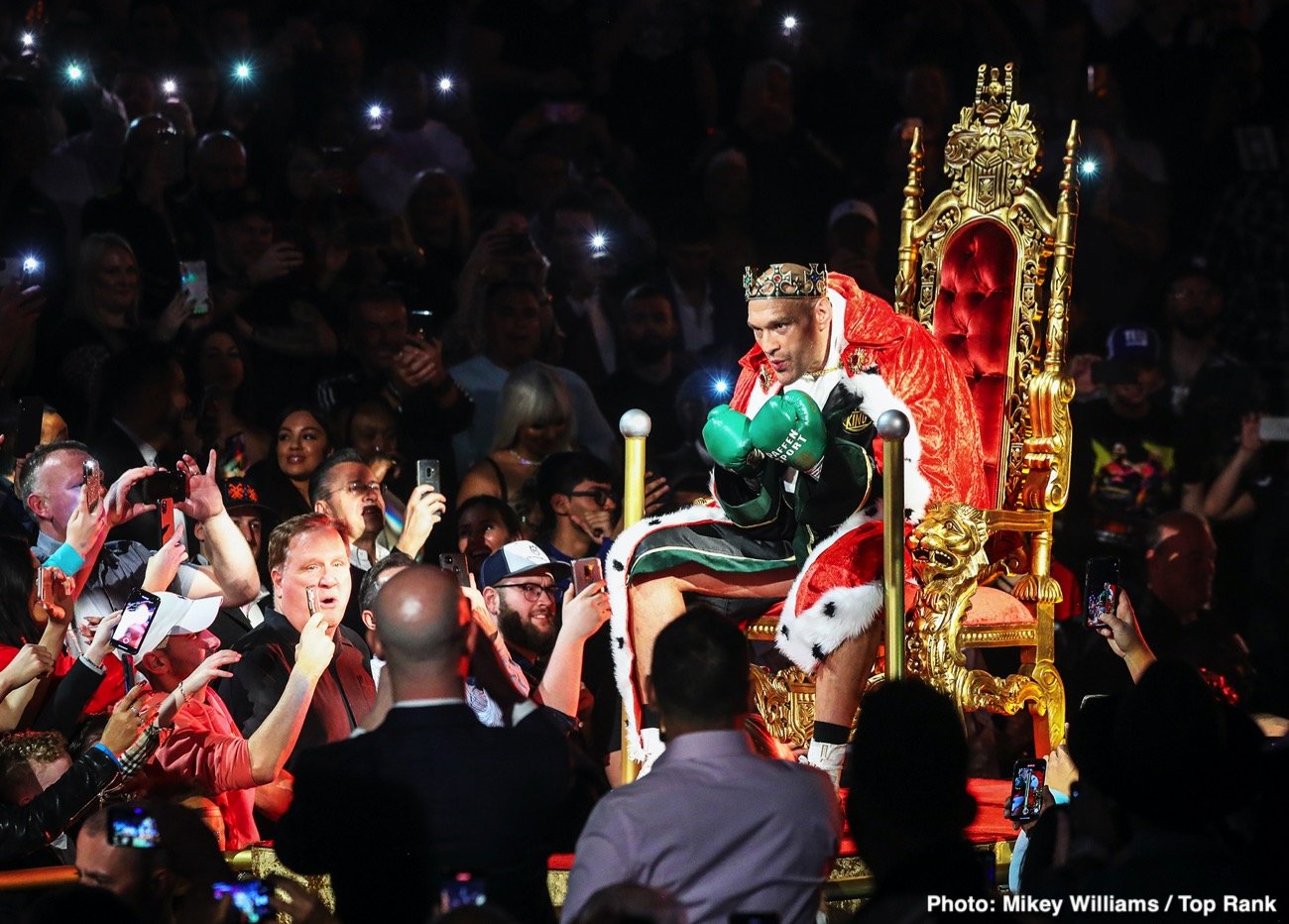 “He can’t beat me, and that’s the fact of the matter,” said Fury to IFL TV speaking about Wilder. “Deontay Wilder can’t beat Tyson Fury. Not the way I see it. Listen, he can land a big punch on me. Anyone can. They all have the same chances these heavyweights,” said Fury.

“I’m sure Deontay Wilder will bring his A+ game in the rematch, and I’m sure I will. I’d say it’s a 60/40 fight this time because the odds have got to be in my favor. After all, I beat him twice. You can never write a man off like Wilder ever,” said Fury.

If Wilder lands one of his right hands on the button, he’ll put Fury over. Many boxing fans believe that Fury is going to come into the Wilder rematch weighing in the 270s again, hoping to use that size to walk the 230-lb American down to stop him.

The way that Wilder looked in the last, he won’t beat Fury in the trilogy match. Their rematch last February was so one-sided that it’s probably going to hurt the amount of interest from boxing fans, who won’t want to buy it on pay-per-view.

Further, you’ve got to factor in how bad the U.S. and U.K. economies are right now, and that’s going to impact the pay-per-view sales as well.

Deontay has a puncher’s chance against Tyson

“They all have a puncher’s chance. It only takes one to put a man down,” said Fury. “I was down twice against Deontay Wilder. The odds are in Deontay’s favor. I think he could knock a bull over, Deontay Wilder.

“He’s got immense power. He’s got speed, accuracy, and he’s got an unorthodox style that you don’t see the punches coming, which is very difficult to defend against if you’re not 100 percent focused. Yeah, I want to fight Deontay Wilder again.

“There hasn’t been a trilogy in the heavyweight division since Muhammad Ali vs. Joe Frazier. I want to put a trilogy in this generation. I owe Deontay Wilder. Deontay Wilder stepped up to the plate twice and gave me a shot at the WBC title, made me a lot of money, and I’m returning the favor,” said Fury. 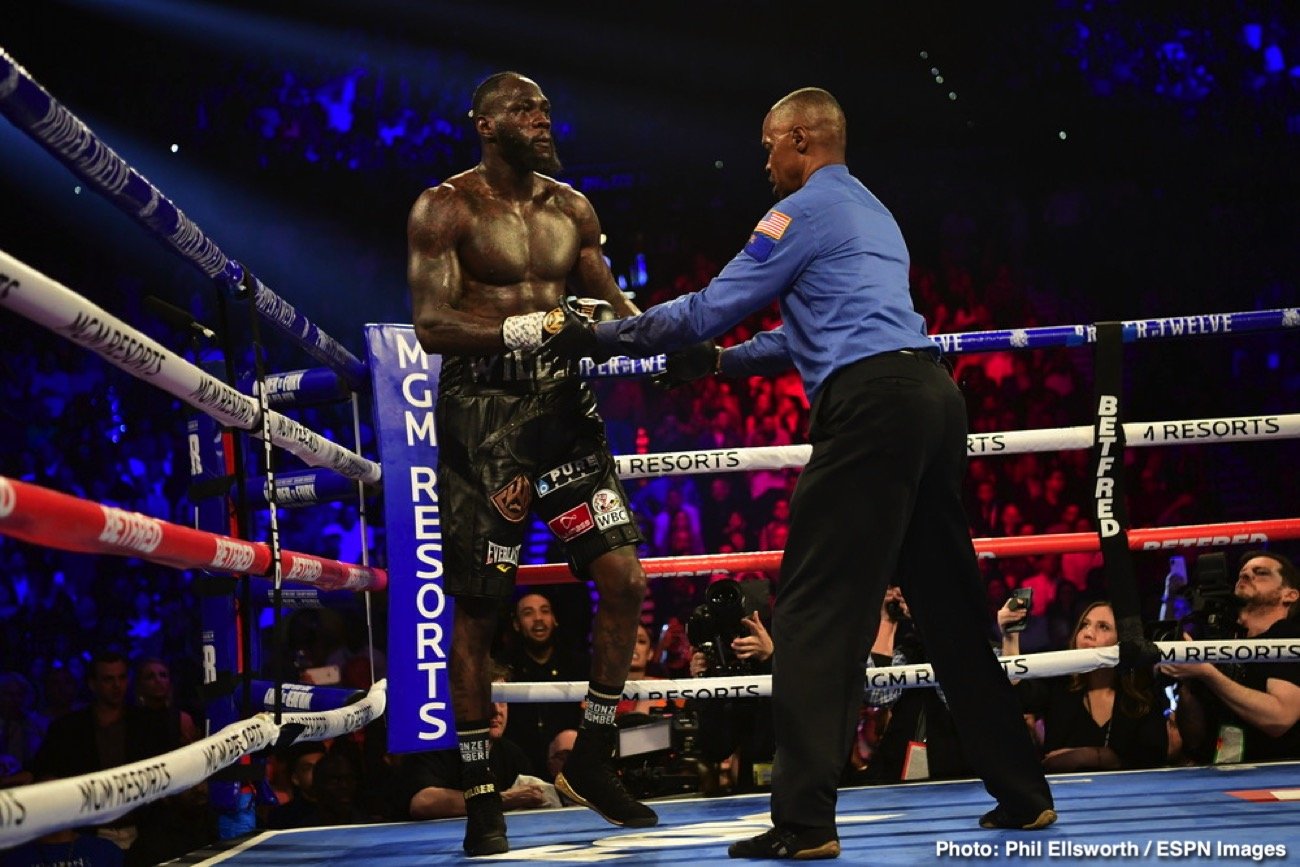 Wilder will always have a puncher’s chance against anyone, but more so against Fury. The Gypsy King has already proven to be susceptible to Deontay’s power, and he could have problems if he gets hit clean in the third fight.

What a lot of people forget about the second fight is that Fury hurt Wilder with an illegal punch to the back of the head in the third round, and it messed up his equilibrium for the remainder of the fight.

Wilder now knows that Fury could be targeting the back of his head again, and he’ll be sure to avoid letting him land those shots. What would be bad is if the Wilder-Fury trilogy match disintegrated into a rabbit-punching contest with both heavyweights throwing illegal shots all night. Fury proved in the second clash that those shots can be useful and that the referee ignores them.

Fury says Wilder has been a good dance partner

“I made him a lot of money twice as well, and I think in the third fight will make a lot of money as well,” Fury said on his trilogy with Wilder. “I think we owe it to each other.  He’s been a worthy dance partner for me, and he’s been a good talker.

“I wouldn’t say we’re friends because he tried to knock my face in, but we’ve been good for each other over the years,” said Fury about Wilder.

Until recently, Wilder was one of the most popular heavyweights in the division, but his two fights with Fury have dimmed his star appeal. If Wilder can beat Fury in the third fight, then that’ll bring him back to where he was before.

Fury may not realize it, but he’ll probably make more money losing to Wilder then beating him. If he gets demolished by The Bronze Bomber, that’ll create a tremendous amount of interest for a fourth Wilder-Fury fight. But if Fury defeats Wilder in another one-sided battle, that’ll close the book on the rivalry once and for all. There would likely never be a fourth fight between Deontay and Fury after that.

Fury can make good money fighting Joshua, but it’ll be tougher for him to sell his fights against other British heavyweights like Dillian Whyte to U.S. boxing fans. Whyte isn’t a big name in the States, and he’s viewed as a fighter that beat a handful of B-level fighters to earn his #1 ranking with the World Boxing Council.


« Teofimo Lopez or Vasiliy Lomachenko: Who has more POP?

Dillian Whyte vs. Alexander Povetkin on August 22 on DAZN »