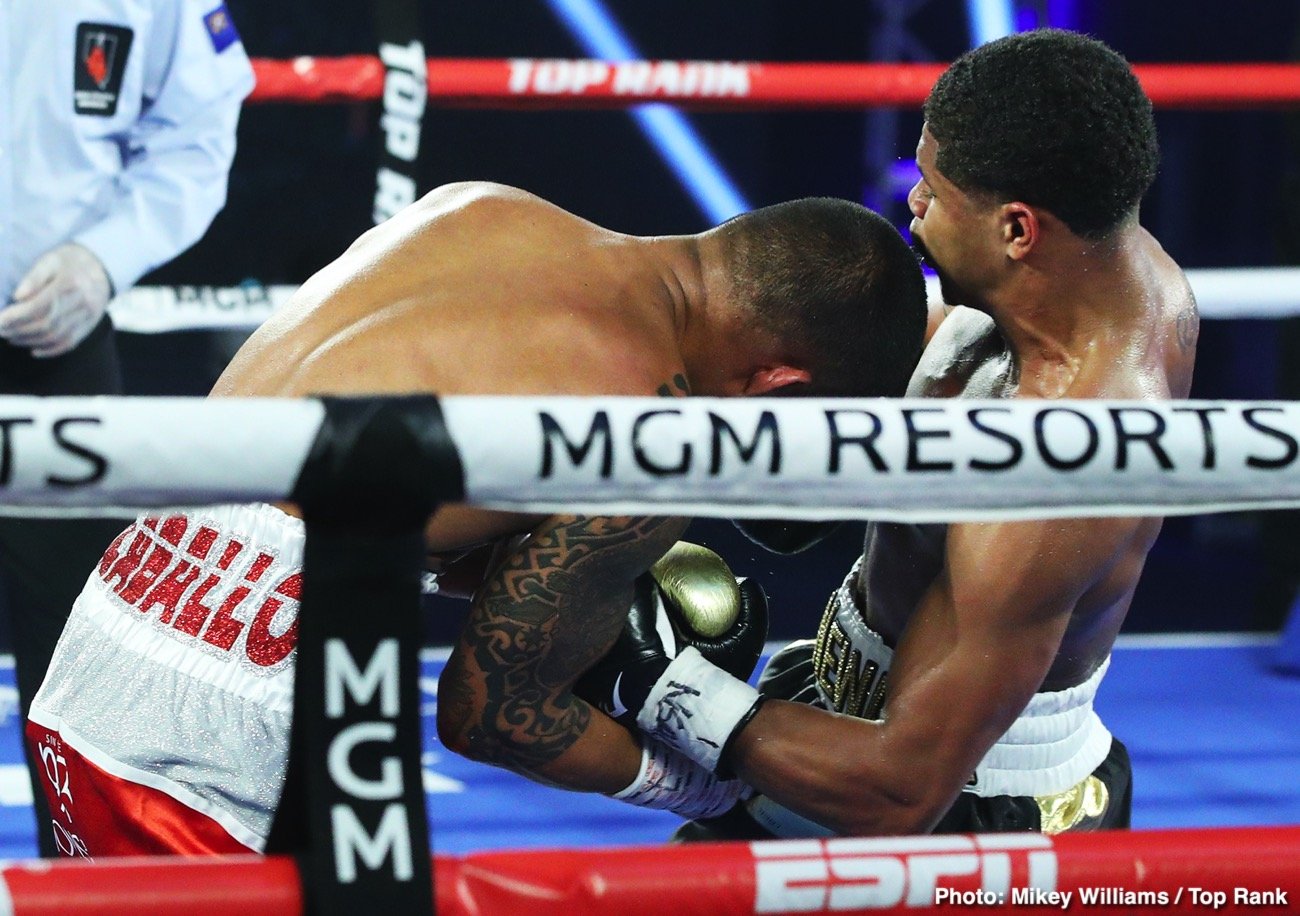 By Jeff Aronow: Tonight’s sixth-round knockout win for Shakur Stevenson over Felix Caraballo on ESPN was an outcome that most boxing expected given the different levels these two fighters are at.  Stevenson (14-0, 9 KOs) did what he wanted with the 33-year-old Caraballo in dropping him twice with body shots in knocking him down in rounds 1 and 6.

Stevenson hurt his hand in the fight, which isn’t all that surprising because he was loading up with everything he threw. Shakur isn’t a big puncher, so he was trying hard as he could to load up on his punches. When fighters do that, they often suffer hand injuries because they’re not used to throwing with maximum power.

Stevenson looked great in fighting behind closed doors at the MGM Grand in Las Vegas. It was weird because it was hardly even noticeable that the crowd wasn’t there.

The only time you could tell that there weren’t any fans was when the camera looked into the audience. Where it was noticeable that fans weren’t’ there is when Stevenson knocked Caraballo down with a body shot in the sixth. You could hear him in pain from the shot as he was on the canvas.

Referee Tony Weeks stopped the fight at 1:31 of round 6 after Stevenson knocked Caraballo down with a nice punch to the solar plexus.

Stevenson’s standard airtight defense wasn’t quite good enough to keep from getting nailed by some big shots tonight.

One reason for Caraballo finding a way through Stevenson’s defense was the sheer number of punches he was throwing in the fight. Caraballo had an excellent game plan that involved him throwing a lot of punching, knowing that he would miss a lot, but he would still land.

“Everything about this fight week was different. After my last fight was canceled, I was happy to showcase my skills for all of the boxing fans,” Stevenson said

What Caraballo didn’t figure on was Stevenson getting through with his own shots, especially his punches to the body.

No one thought that Caraballo (13-2-2, 9 KOs) would put up much resistance, and they were correct.

The 22-year-old Stevenson (14-0, 8 KOs) treated Carballo like a speed bump in running over him in knocking him down with punches to the body at the MGM Grand in Las Vegas, Nevada.

Caraballo wasn’t a pushover by any means. He showed good punching power on the shots that he landed on Shakur, but the problem was, he didn’t land enough. When Caraballo would lean forward looking to land, putting him in no man’s land and find himself getting nailed by Shakur’s highly accurate counter punches

“He hit me with a couple shots, more than I’m used to, a couple jabs here and there,” said Stevenson of Caraballo. He was a tough guy.”

Top Rank wanted to get Stevenson out there to have him perform after his eight-month layoff. They weren’t too worried about putting him in with someone that would be a challenge for him. Tonight was all about keeping Stevenson busy so that he didn’t miss too much time.

“I hit him with everything I could early, I wobbled him a bunch of times, and I started realizing the headshots weren’t going to do it, so I went to the body,” said Stevenson.

When Stevenson fights next, it could be against IBF featherweight champion Josh Warrington. That’s a match that he, Warrington, and his promote Bob Arum wants. But we’ll have to see because it’s too big of a fight to be staged without an audience present like tonight.

Also on the card, featherweight Robeisy Ramirez defeated Yeuri Andujar by a first-round knockout to pick up his third win. Ramirez’s fight with Andujar (5-4, 3 KOs) was buried in one of the early matches in the event.