By Matt Lieberman: Revenge will be on the mind of two-time Olympic gold medalist Robeisy Ramirez (3-1, 3 KOs) this Thursday night on July 2 when he faces Adan Gonzales (5-2-2, 2 KOs) in a six-round bout on Top Rank-promoted card on ESPN. Ramirez and the 23-year-old Gonzales will be fighting in a rematch at the MGM Grand Conference Center in Las Vegas, Nevada.

The 2012 and 2016 Olympic gold medalist Robeisy Ramirez and Adan Gonzalez will be fighting on the undercard of the rescheduled headliner fight between Jose Pedraza and Mikkel LesPierre.

The Denver, Colorado native Gonzales pulled off a big upset in beating Ramirez, 26, by a four-round split decision on August 10, 2019, at the Liacouras Center, in Philadelphia.

Last August was Robeisy’s highly anticipated pro debut for Top Rank, and most people in boxing felt that he would breeze through the contest with relative ease. Gonzales had other ideas on his mind in taking the fight to Robeisy, outworking him, and making it difficult to score the rounds. 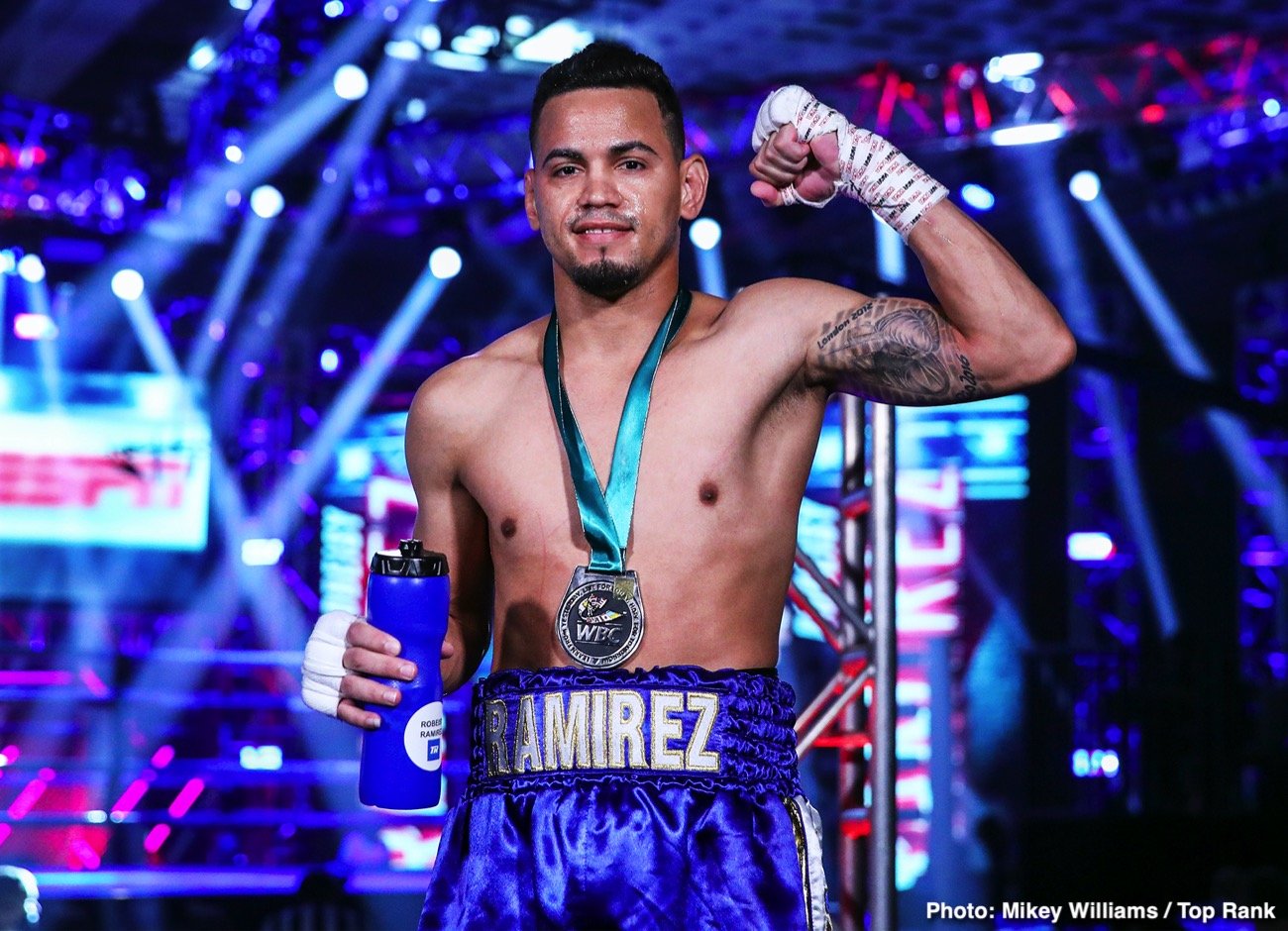 Although Robeisy landed the harder, cleaner shots and was the more accurate of the two, the judges were impressed with the slightly better work-rate from Gonzales. Apart from the first round knockdown, Gonzales scored, the Ramirez looked like the better fighter of the two.

You could see why Robeisy had captured two Olympic titles for Cuba. When Robeisy turned it on, he looked like he was in another galaxy compared to Gonzales in terms of talent.

The problem that Robeisy had, he didn’t throw enough punches, and he let Gonzalez outwork him in virtually every round of the fight. In the pro game, it’s not a good idea to allow your opponent to throw more punches than you, particularly if you’ve already been knocked down in the fight.

You’ve got to blame Robeisy for not adapting early on by throwing more punches after he was knocked down in the first round. That was a rookie mistake on Robeisy’s part, and he should have known better.

In round one, Gonzalez knocked Ramirez down with a hard left hook that caught him perfectly as he was backing away with his right hand down. Ramirez pulled straight back without keeping his right hand high to block Gonzales’ favorite punch, which is his left hook.

Adan Gonzales had success with his left hook

Unfortunately for Robeisy, this wasn’t the last time Gonzales’ left hook caught him in the same manner in the fight. In three other instances, Ramirez was tagged hard by Gonzales’ left in rounds 2, 3, and 4. Gonzales had the perfect weapon to create Ramirez problems and to score points with the judges.

By having this Thursday’s rematch a six-rounder instead of four, it lessens the chance that Ramirez will lose if he gets dropped again by Gonzales. But, of course, if the same type of judges works the rematch, then Ramirez may fail again. 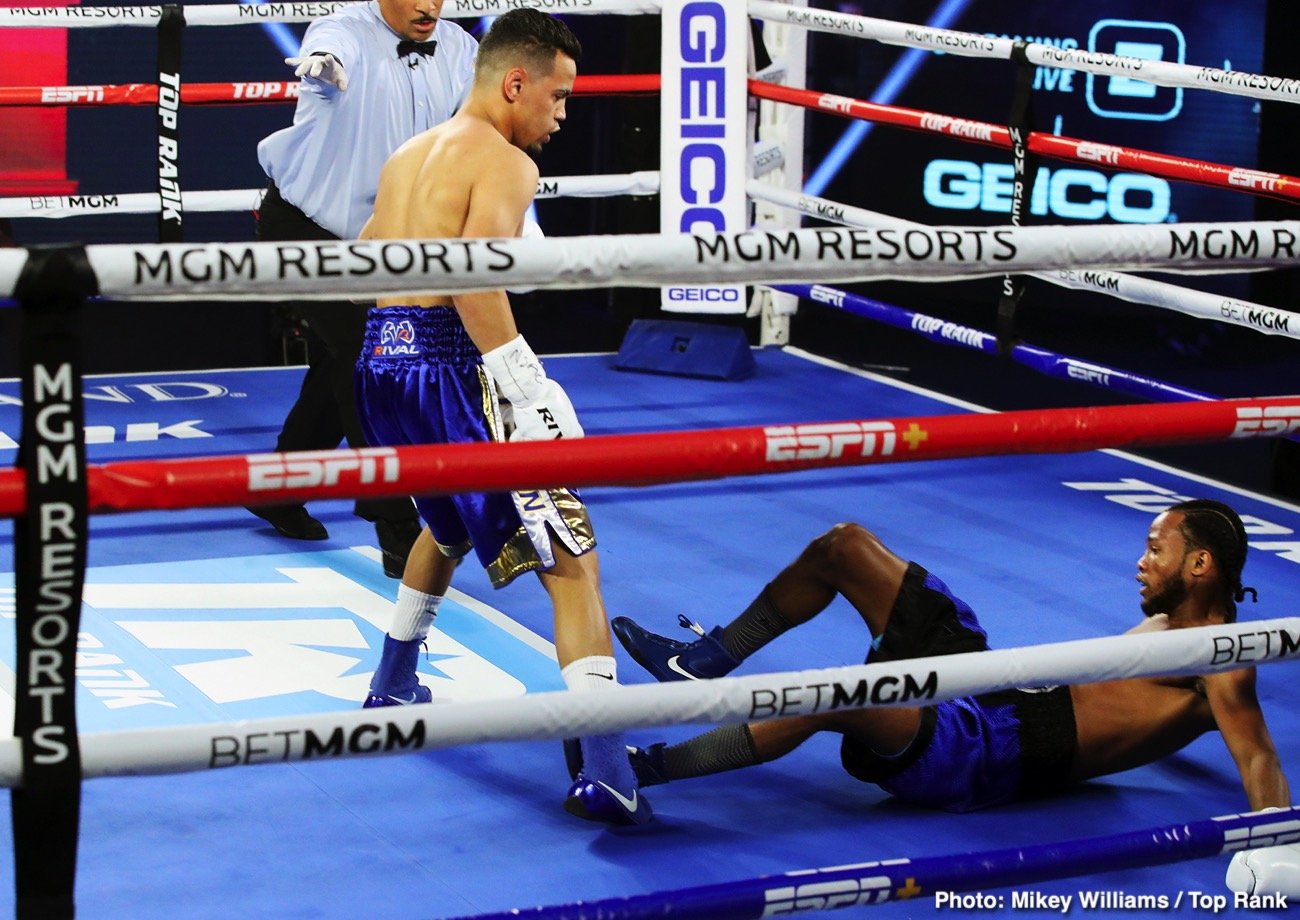 That’s something he can’t afford to do if he wants to have a successful pro career. Coming back from two losses to a non-world level fighter like Gonzales would be near impossible for any opponent. It would be worse for Ramirez, though, as he’s coming into the pro ranks with such expectations.

During his many years in the Cuban system, Ramirez racked up wins over fighters much more talented than Adan Gonzales. These were many levels above Gonzales, which is it was so strange for Ramirez to lose to him.

Again, this writer had Ramirez winning the fight against Gonzales. I gave Ramirez rounds 2, 3, and 4 based on his much cleaner shots, and his far better accuracy.

The judges saw Gonzales, the American, throwing more punches, and they gave it to him on work rate along rather than on which fighter was landing better punches with a higher percentage.

Ramirez has stayed active since defeat

Since Ramirez’s loss to Gonzales, he’s won his last three contests against these fighters:

Ramirez has looked 100% better in coming back from the defeat to Gonzales, and you can say that it was a good thing for him to lose early on. It was a wake-up call for Ramirez that he needs to take each fight seriously. Ramirez has got to know that everyone he faces at the lower level sees him as their Super Bowl. 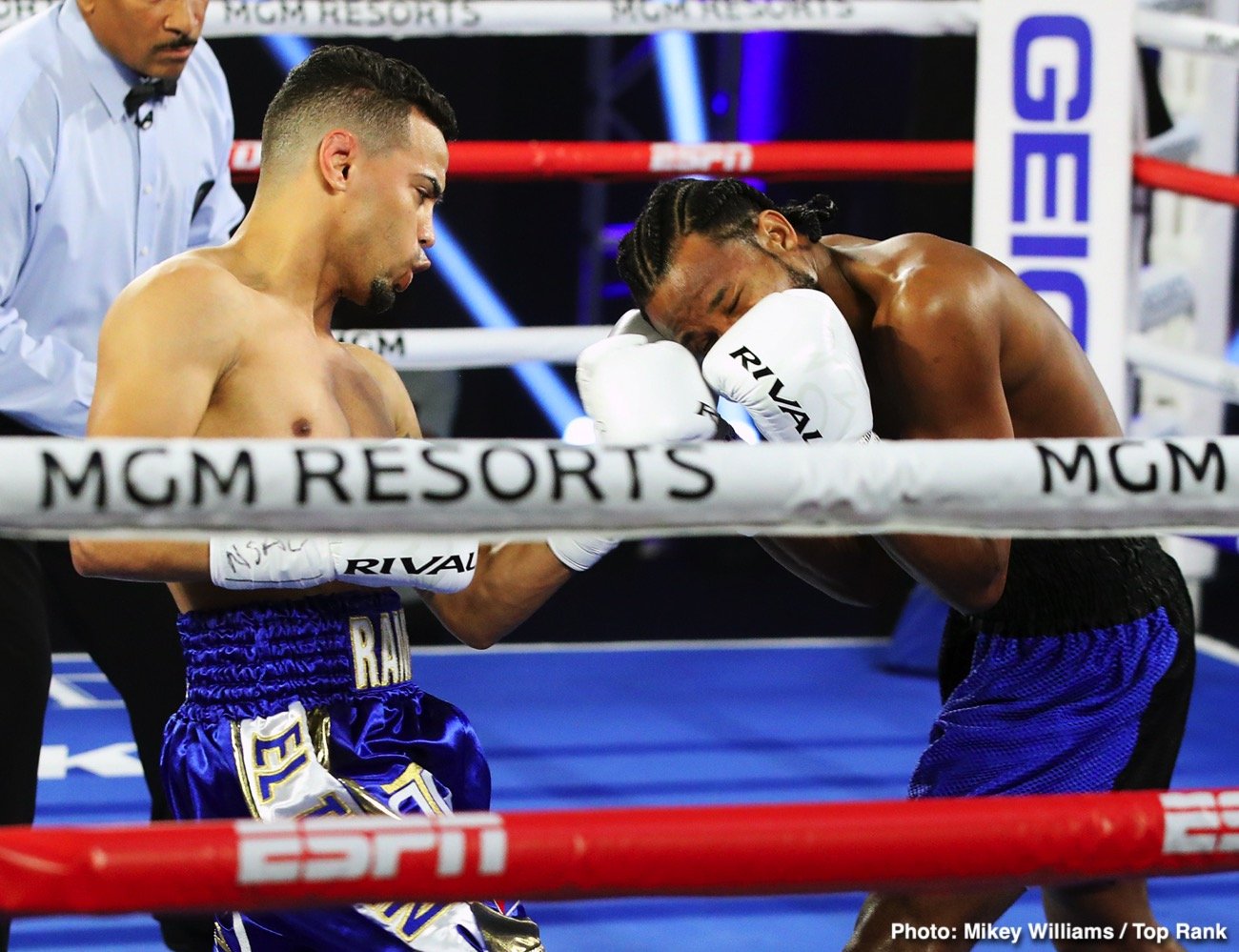 These guys have never fought a two-time Olympic gold medalist during their careers, and this is their one shot to try and make a name for themselves. In other words, it’s their chance for 15 minutes of fame, and they’re going to make the most of it.

Ramirez was guilty of not fighting as hard as he needed to win the Gonzales fight after the flash knockdown in the opening round, and it cost him.

“When I looked at his eyes, I could tell he wasn’t ready to feel how hard I hit, my power,” Gonzales said to ESPN.com. “They underestimated me, they thought I was some pushover. I’m not.”

What Gonzales has going against him this time is his inactivity and the fact that the fight will be a longer one going six-round instead of four. Ramirez, who is backed by the Top Rank powerhouse promotional team, has stayed busy, improving his game in his last three contests.

Gonzales has lost the element of surprise

For his part, Gonzales hasn’t fought at all. He’s been inactive for the last ten months since his upset win over Robeisy last August, and he’s had to work to support his family. Unlike Robeisy, Gonzales doesn’t have the luxury of concentrating only on boxing.

It’s going to be difficult for Gonzalez to fight at the same level as he did a year ago for the previous bout against Ramirez. There’s going to be a lot of ring rust, and the element of surprise is gone. Ramirez will have been studying the mistakes that he made in the fight, and he will be sure those things don’t happen again.

For Gonzales to have any chance of winning the rematch, he’s going to need to try something different because Ramirez will be ready for him this time. Gonzales was getting the stuffing beaten out of him in the 4th round by Robeisy in the first fight. That suggests that the Cuban talent had figured him out.

Mistakes Ramirez made against Gonzales:

It would be in Ramirez’s best interest to throw as many punches as possible so that Gonzales steal rounds by throwing punches that don’t land. The judges last time were enamored by Gonzales’s first-round knockdown, and they kept giving him rounds on him, letting his hands go more.

They were mostly missing or being blocked. Ramirez was the better fighter from rounds 2 to 4.

The way that Ramirez has looked in his last two fights, Gonzales is going to have a difficult time seeing the final bell. Ramirez is punching with better power now, and he’s throwing more punches as well. It’s going to be a nightmare for Gonzales to try and win this fight using the strategy as last time.

Ramirez was nailing Gonzalez at will with shots in the fourth round last time, and it looked like he was just getting warmed up. With the way Ramirez was punching in that round, Gonzalez wouldn’t have been able to take too much longer.

Braekhus – McCaskill on August 15, LIVE on DAZN and Sky Sports »