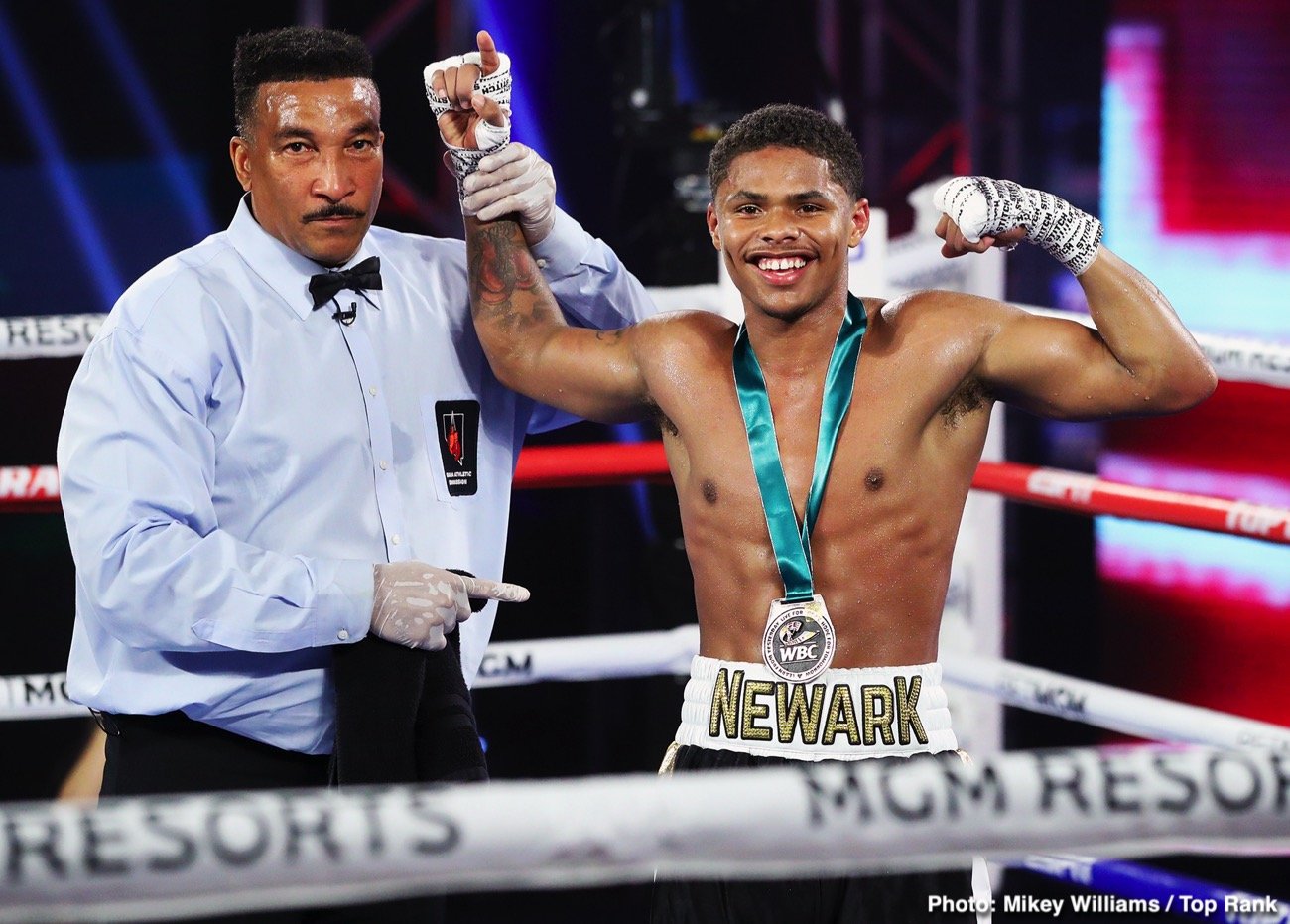 By Dan Ambrose: They’re already calling Shakur Stevenson ‘The southpaw Floyd Mayweather’ after just 14 fights in his professional career, and his co-manager Andre Ward says he has “no ceiling” with his potential.

Ward would like to match Stevenson against Leo Santa Cruz, who mentioned this week that he’d be interested in fighting Shakur. Despite Santa Cruz saying he would be willing to face Stevenson, it wasn’t a situation where he initiated the topic.

Top Rank will need to make a move on Santa Cruz right away if they want to match him against Shakur. Santa Cruz has other plans for his next fight, but he could change his mind if Top Rank makes a massive offer for a clash against Stevenson.

Top Rank would be taking a risk in letting Shakur face an experienced fighter like Santa Cruz at this early juncture of his career.

If Stevenson moves up to 130 [super featherweight], he can face these fighters:

Those fights probably won’t happen in 2020 because most of them already have important battles planned.

Santa Cruz and Gervonta Davis could be fighting soon once the crowds are allowed back into boxing events.  If Top Rank wants Santa Cruz, they need to give him an offer he can’t refuse. With the pandemic still preventing large crowds from attending boxing events, Top Rank would need to wait before attempting to put together a fight between Santa Cruz and Stevenson.

‘The name that he keeps throwing out is Leo Santa Cruz. And I just recently saw a quote by Leo that said he has no problem with fighting Leo,” said Ward during last Thursday’s ESPN broadcast of Jessie Magdaleno’s fight against Yenifel Vicente at The Bubble at the MGM Grand.

Caraballo (13-2-2, 9 KOs) didn’t possess the talent to give Stevenson much of a test last Tuesday, but that was expected. Stevenson’s management brought Caraballo in as a showcase type opponent to look good against, which is why it’s a little strange for Ward pouring a lot of praise over his head.

It wasn’t a good enough opponent for Ward to talk about Stevenson having “no ceiling” on his potential.

We probably won’t get a chance to make a real comparison from Stevenson to Mayweather until Top Rank steps Shakur up against good opposition. What’s evident is that Stevenson is fighting no names at 126, and that’s why it might be time for him to move up to 130 or 135.

In the lightweight division, Top Rank can test Shakur against Vasiliy Lomachenko and Teofimo Lopez. If Shakur is the real deal, he’ll beat both of those fighters.

Stevenson impressive in the showcase win

“I don’t know but hopefully something,” said Andre Ward to ESPN when asked what Shakur Stevenson took from his game for his win over Caraballo. “Whatever he took, maybe it worked tonight, as well as from Terence Crawford, Floyd Mayweather, and others.

“Shakur is a student of the game, so he takes a little bit from everybody, and he stays true to who he is,” said Ward. “He’s the total package, and he is very giving on the offense side.

“He loves to let his hands go like we saw tonight, but very stingy and selfish on the defensive side. He doesn’t like to give up a lot of free shots. That’s how you last in the game,” said Ward.

Stevenson won’t be able to win his fights against the A-level guys at 126, 130, and 135 by being defensive. You’ve got to mix it up with the talented fighters to beat them, and Stevenson will get a lot once he faces the best.

It’s going to be difficult for Stevenson when he goes up to 135. Ryan Garcia, Gervonta Davis, and Teofimo Lopez are much bigger punchers and with better hand speed than Shakur. Top Rank need to think about controlling Shakur’s move up through the weight classes.

The reason Stevenson lost to Robeisy Ramirez in the 2016 Olympics is that he was focusing too much on his defense, and not enough on his offense.

“I don’t see one, and that’s the scary part and also the encouraging part in being a big brother to him, and the co-manager,” said Ward when asked what’s the ceiling for Shakur.

“He’s a student of the game. He watches boxing, and he’s still learning even though he’s a champion and a silver medalist. You’d be surprised about the number of fighters that are at the top of the heap that doesn’t watch boxing, and they don’t learn anything.

“They think they know it all. He’s not that guy. He’s also a gym rat. He stays in the gym and lives a spartan lifestyle, and the skies the limit. He’s only going to get better. He’s still a baby in the game. 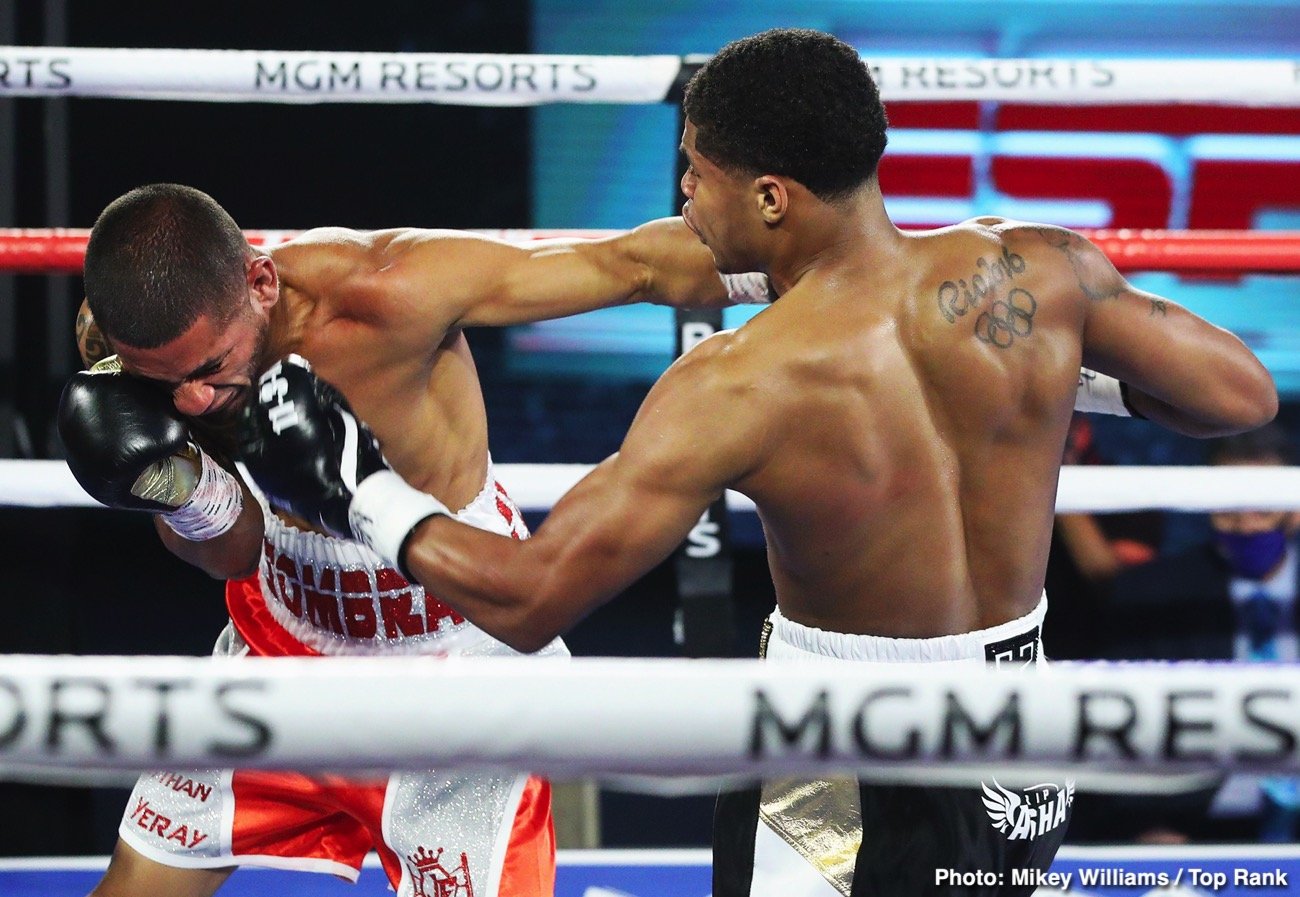 “I’m not really concerned about any opponents. There’s always a level of concern. This is the sport of boxing. One punch can turn your lights out and change your pay scale,” said Ward in talking about what Stevenson needs to watch out for.

There might be a ceiling that Ward hasn’t spotted. This writer can see right away that Shakur isn’t much of a puncher, and hand speed isn’t that great.

Shakur will need to manage himself

“His biggest opposition is himself,” said Ward on Shakur. “He’s the only person that can hurt him. And he’s focused, he’s young, and he’s maturing right before our eyes.

“He’s learning how to deal with the pressures of the family, and the pressures of being on the world stage, making money and people knowing how much money you make. That’s the only concern.

“We talk about this a lot. I’m not concerned as if he’s going to go off the cliff tomorrow. That’s something we always have to manage ourselves. As long as he manages himself, everything is going to take care of itself,” said Ward

It’s good that Stevenson wants to succeed, but he’s not the only fighter working hard. All the top guys are putting in a lot of work, and many of them are blessed with better physical tools than Stevenson.

If he’s going to beat the top guys, he’ll need to do it with his technique. In the featherweight division, the 5’8″ Stevenson has the size advantage over his opponents. As he moves up the weight classes, his size won’t be able to help him as much.

Arum is talking about Stevenson eventually fighting at 147 and 154. If that’s the case, Shakur will need to develop his power game because he won’t be able to use his size to win fights in those divisions like he’s doing now.