By Kenneth Friedman: Teofimo Lopez is furious with Ryan Garcia and Devin Haney because neither of them wants to face him next. It’s hard to believe that neither fighter wants to step up to the place to face Lopez now that he’s available.

The travel ban that the United States has in place is preventing the 32-year-old Lomachenko from coming over to face Teofimo.

Teofimo says his management reached out to Haney’s promoter Eddie Hearn of Matchroom Boxing, but they’ve not heard anything back. It’s possible that Hearn is still weighing the pros and cons of letting Haney face the hard-hitting Teofimo.

Teofimo: We tried to make the fight with Devin Haney

“We’re trying to make these fights happen. I’m being dead a** [serious] said Teofimo on social media. “The fact that these guys don’t want to fight; they want a tuneup fight or something else. It’s frustrating.

‘The Loma fight won’t be happening because he’s in Ukraine, and they did a ban in traveling, so he can’t come back to the U.S,” said Teofimo. “We tried to make a fight with Devin Haney, but they didn’t come back to us.

“And the top 15 guys in my weight class and my division and the IBF, the majority of them are out of the country. It sucks. Tank, I want to fight. I think my belt says it all that I’m the best,” said Teofimo.

It’s odd that Haney, 22, would turn down a fight against Teofimo, as he’s been complaining about not being able to take on Lomachenko. A lot of boxing fans rate Lomachenko as #1 at 135, which if that’s the case, then Haney SHOULD be willing to fight Teofimo.

Lopez is correct about the top 15 contenders in the IBF’s top 15 rankings being freighters located outside of the U.S. None of those guys are based in the United States, which limits the options available for Teofimo’s next fight.

It’s quite possible that Teofimo’s recent 2nd round knockout win over IBF lightweight champion Richard Commey may have scared off his competition.

Tuneups NOT needed for Teofimo

“We don’t need no tuneup fight. If only you guys knew how it is to negotiate and not difficult, it is to make these fights happen,” said Teofimo. “Me, my father and my manager, if we can’t make this Loma fight happen, then let’s make this Devin Haney fight happen. We reached out to Eddie Hearn.

“We haven’t got a response back. These guys say they want the smoke, but they don’t. They’re talking out of their a**

It looks bad on Haney and King Ryan’s part that they’re not stepping up to the plate to take on Teofimo now that he’s offering a fight to them. However, they may want to make sure that they fight in front of a crowd.

There are certain fighters were it’s less of an issue to fight behind closed doors, but Teofimo isn’t one of them. With Teofimo’s popularity, you would want to stage a fight between him and Haney or Ryan in front of a crowd.

If Teofimo were an older fighter or one with less self-confidence, then a tuneup would be needed. He’s still young, and the training that he’ll be getting in camp will be more than enough for him to prepare for Haney or Ryan.

“Top rank already said we’re making fights happen. We’re going back out—you loyal fans. You’re not even loyal. Be real. You f*** with everybody until they lose. I’ll make sure I make the moves.

“We try to make fights happen, bro, but they don’t want it, though—one thing about my father and me. We talk a lot of s*** because we know we can back it up,” said Lopez.

Top Rank Boxing promoter Bob Arum is going to need to work his magic to find a suitable opponent for Teofimo to fight. If Haney, Ryan, and Lomachenko don’t fight Teofimo, Arum will need to use his imagination. Ideally, Arum should be looking at weight classes around the lightweight division to expand the pool of potential opponents for Teofimo to fight.

These would be good options for Teofimo:

What we don’t need is for Top Rank to feed Teofimo, a fodder level opponent with little talent. If Arum is going to insist on matching Teofimo against one of his own fighters from his stable, then it should be someone with talent.

Teofimo has had too many mismatches as it is. He needs to face solid opposition to prepare him for the crafty Lomachenko. If Teofimo is willing to fight guys from outside of the 135-pound weight class, he should be able to get a good opponent. 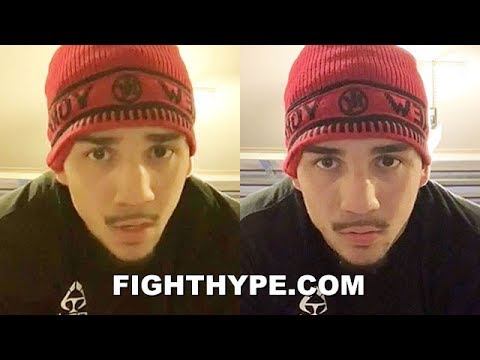