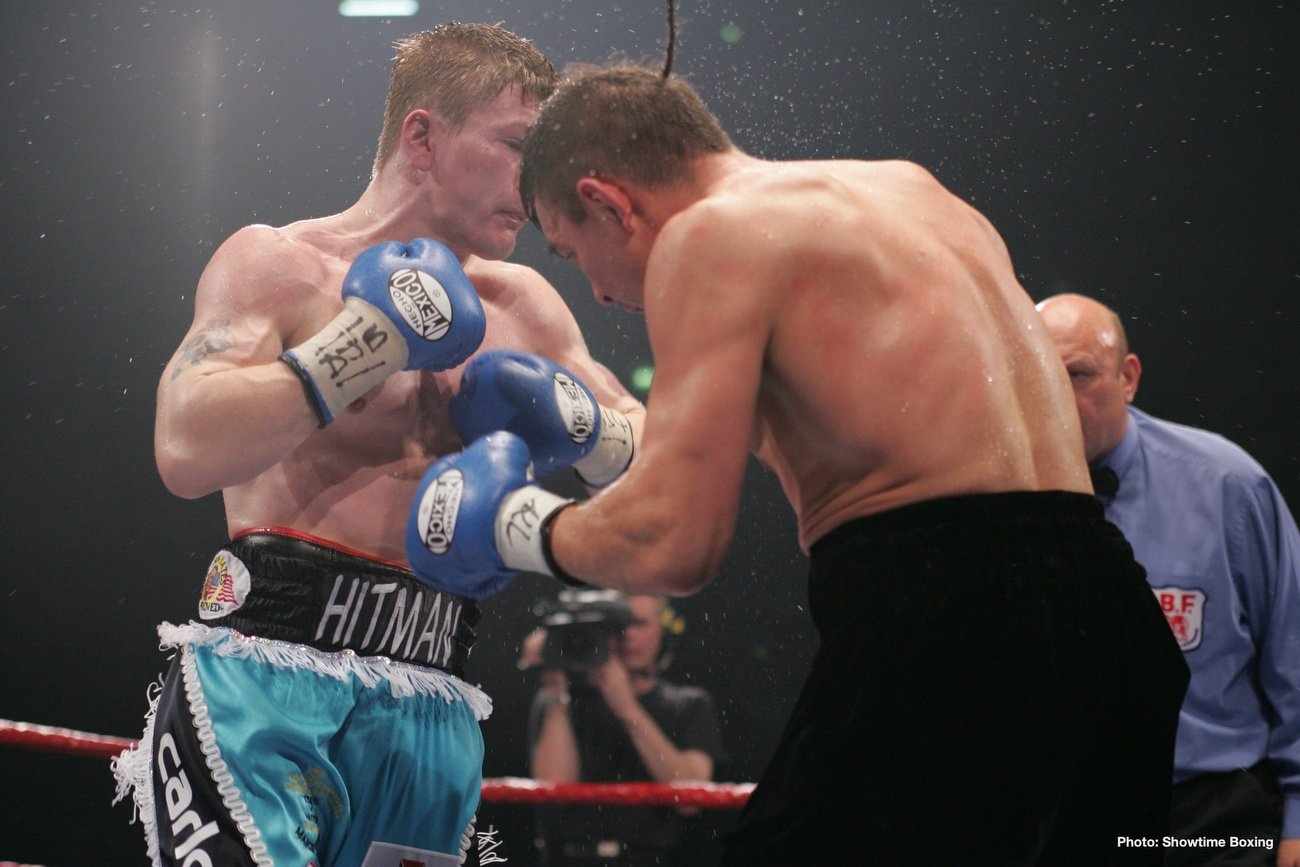 By Kenneth Friedman: Ricky Hatton thinks it’s a bad idea for Mike Tyson to relaunch his career now at age 53. Speaking from his personal experience, the former two-division world champion Hatton (45-3, 32 KOs) believes Tyson is now too old to be returning to the ring.

Former IBF, WBA, and WBC heavyweight champion Tyson (50-6, 44 KOs) wants to come out of retirement for an exhibition fight to donate the money to charity. Tyson isn’t expected to resume his professional career and take on any of the supreme heavyweights in the division.

Former two-division world champion Hatton, 41, had a bad experience in coming out of retirement in November 2012 in losing to former WBA welterweight champion Vyacheslav Senchenko by a ninth-round knockout. After three years out of the ring, Hatton cut corners in losing a massive amount of weight and then taking on Senchenko without taking a tune-up fight first in 2012.

Senchenko had just lost his WBA 147-pound title to Paulie Malignaggi by a 9th round knockout in April of 2012, and he was still one of the best fighters in the welterweight division.  Hatton foolishly took the fight with Senchenko without taking any warm-up fights. In hindsight, Hatton was asking for trouble in taking on Senchenko. He set himself up to fail, and that’s what happened.

“A lot of boxers out there can relate to it, especially at the championship level,” said Hatton to IFL TV. “I would have a 12-week training camp, and it was ten times worse. The one thing that would get me down is not being able to see my family and friends. I coped with it a lot better than I thought. And I had a bad day. I sadly lost my cousin Steve, who passed away.

“Mike Tyson. One thing I won’t be doing is fighting John Fury,” said Hatton. “John’s going for it, isn’t he? There’s no way I’m making a comeback, to be honest with you.

“Once I come out of the lockdown, I want to try and maintain it. Those are the famous last words. I could walk around with a six-pack seven days a week, but I want to eat pies and drink Guinness. It’s not going to happen, is it?” said Hatton.

Hatton’s lack of patience with his career would likely cause him to have a poor outcome if he came back. If he came back without taking tune-ups like last time, he, of course, fail as he did in his loss to Senchenko. Had Ricky taken his time and worked his way up to the level of a Senchenko, he very likely would have beaten him.

Tyson is in a good place now

“We all make comebacks because we have so much to improve. That’s why I came back because I felt like I had to redeem myself. But Mike has mentally got himself on track, not just physically on track. He’s looking better, talking better, and feeling better.

“That’s why he’s doing motivational speaking,” Hatton continued about Hatton. “Now his body is right, and his head is right. Why is he thinking comeback? I don’t get it. It would be a tragedy for him after he went through all those bad times, and got back on the straight and narrow to do himself some serious injury,” said Hatton.

The workout clip of Mike Tyson of training on the pads has the entire boxing world talking about him and wondering if he can come back. None of the other heavyweights in the division look that good in hitting the pads.

“So to come back and put that kind of performance against Senchenko…that’s the reason why I made my comeback,” said Hatton. “But with Mike making a comeback, I really hope he doesn’t. I think I’m not alone saying that. People told me, ‘Don’t fight Senchenko.

“That’s far too hard of a fight. He only lost his world title in his last fight. I was the opinion that if I can’t beat him, then I should pack it in. Then I thought, Senchenko is ranked #3 in the world, and Malignaggi was the champion at the time,” said Hatton.

If Tyson destroys his opponents in his charity exhibition matches, then he may make a comeback. If Tyson blows out his opponents in the first round in the exhibition bouts, it could potentially plant ideas into his head that he can do the same thing against one of the better heavyweights.

Hatton with no regrets about making a comeback

“Not one bit,” said Hatton when asked if he has any regrets for coming back to fight Vyacheslav Senchenko in 2012. “A lot of people say, ‘You only got beat by Mayweather and Pacquiao, and that’s all well and good.

“People said, ‘Listen, we all make mistakes, and you’re no different.’ What matters is what goes on inside your own head. I felt like I had to go out there and prove myself. Since the Senchenko fight with everything, I went through with food and drink, losing five stone in weight.

“Doing all those things and coming back and fighting someone in my first fight like Senchenko, I think people respected me before, and I’d like to think that they respect me more now because where I came through and where I am at present. It was a bumpy time,” said Hatton.

With the way Hatton made his unsuccessful comeback against Senchenko in 2012, he should have regrets. At the time, people thought Hatton was crazy to take on Senchenko without taking two or three tune-ups. It wasn’t just the three years of inactivity that Hatton was coming back from.

It was all the weight that Hatton was forced to lose in training camp to get ready for his comeback. His training camp was a fat farm, and he looked drained after he lost all the weight. The skin was hanging from Hatton’s face and had a skeletal look to him.

Ricky would have fought Khan

“Had I beat Senchenko, because that’s who Malignaggi took the title from, I reckon I’d been mandatory to Malignaggi,” said Hatton. “I might have gotten a world title shot. So that was my thinking in fighting Senchenko.

“And then if I could have won the title and beaten Malignaggi, I would have liked to have a pop at Amir Khan. I always wanted to test myself against the best, and people know that. And I wouldn’t have mind to see how I would have done against Amir.

“I was coming to the end of my career. I would have liked to have had a pop at him. In the end, it didn’t happen. I was where Amir is now when I was around the Senchenko time. Amir only has two or three fights left. Let’s hope he can have a couple of good send-off wins,” said Hatton.

Instead of fighting Senchenko, Hatton should have convinced Khan to fight him straightaway. Khan probably would have given Hatton that fight, as it would have made both of them a great deal of money,

Hatton should think seriously about coming back for a fight against Khan right now, being that Amir is about to retire. It’s never too late.