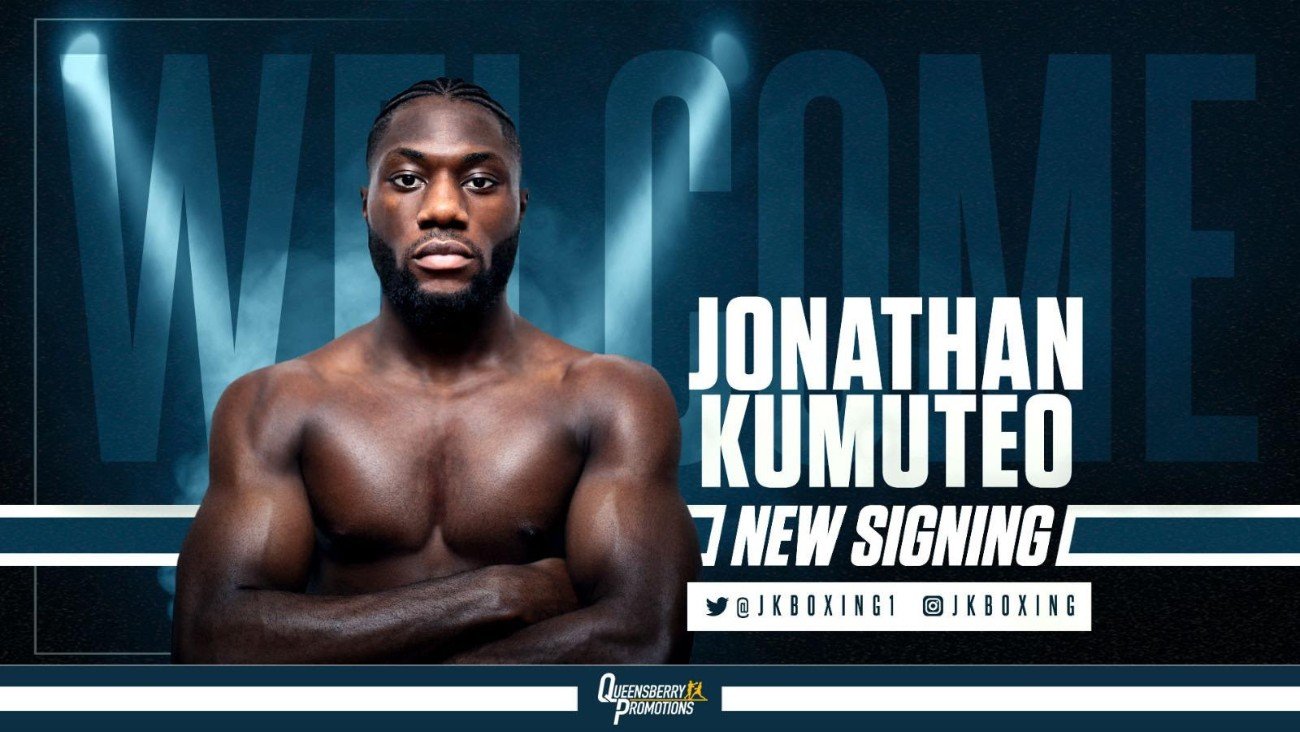 FORMER SUCCESSFUL AMATEUR Jonathan Kumuteo is prepared to turn professional under the promotional guidance of Frank Warren and Queensberry Promotions.

The 24-year-old DR Congo-born welterweight will enter the pro ranks working from the Bushey base of trainer Josh Burnham.

Preparing to embark on his professional journey working hard in solitary at his gym, Kumuteo insists on the launch of his career, and continued development couldn’t be in better hands.

In his first interview as a Queensberry fighter, Kumuteo spoke to Dev Sahni here.

“It means a lot because signing with Queensberry and Frank means I am with one of the biggest companies in the UK and Europe. To have the platform and backing is a dream come true.”

Kumuteo, who describes himself as ‘an aggressive counter-puncher’ enjoyed success in the amateur ranks with victory in the London Novice u20 championships and was a finalist in the National Novice Championships, clocking up 28 fights as an amateur.

However, his amateur experience was punctuated by the suffering of Hidradenitis Suppurativa (HS), which is a chronic inflammatory skin disease for a little over four years.⁣

The condition affected his ability to compete in tournaments, as well as his availability to accept international recognition by both England and DRC.

“I started boxing in 2012, and it affected me for over half of my amateur career,” explained Kumuteo, who hails from Finchley. “I had three operations, the most recent being in November 2018, which I have fully recovered from it.

“The first operation was minor, but the second was a particularly depressing time where I lost all my strength and had to rebuild from scratch. I remember first going back to the gym when I couldn’t even bench-press ten reps with no weights.

“I still boxed and lost in the London Alliance finals before following up with my dermatologist to determine the best course of action with regards to boxing again. The skin around my underarms was fragile and would always tear open.

“Sometimes I could train and sometimes I couldn’t. In my opinion, I should have had at least 60-plus bouts in the amateurs but wasn’t able to due to all the time out.

“I was then advised I would need skin graft surgery if I wished to pursue a boxing career. I recovered for three months and have been in the gym ever since February 2019 training for my professional debut.

“When having to go through the pain, I had to go through and still boxing for four years; I found people were going through similar situations and winning with it. When I found this out, I stopped complaining and got on with everything.

“Now, I am completely healed and free from medication. I feel I am going to be unstoppable because if I can win the London Novice championships, late taking heavy medication every day, what would I have been like now that I am good?”

It was a similar will to win and an insatiable competitive streak that first led him to lace up and to step into the ring in the first place.

“As a youngster, I was always highly competitive, and if there could be a winner – in whatever it was – I always wanted to win.

“A friend of mine challenged me to spar him down at the local boxing club, and initially, I wasn’t interested. I decided to give it a go after a few more challenges, and I fell in love with the sport instantly and joined Finchley ABC.”

When he is not boxing, Kumuteo, who enjoys a sizeable following on social media thanks in no small way to sharing his experience of HS, likes to turn his hand to creative forms of media to share with his followers.

“I put that down to being creative and always thinking outside of the box. I am interested in photography and videography, and I like to cast myself as being creative. I am always studying anything to do it, whether it be in sport, fashion, and whatever.

“My own Instagram page is unlike anyone else’s, and I call it a seamless feed because all my images connect. No matter image I upload, it is almost like a collage, and whatever the size, the images all connect one by one.

“I hope my boxing is seamless as well,” he continued, adding in a career goal for good measure.

“I know I can perform, and I have the potential. With the right team, like Frank Warren and Queensberry, I believe I can go all the way.

“I have been training, and the bag has become my best friend during the lockdown. I am ready to go.”

The two-time national champion and six-time Yorkshire champion reached the final of the senior National Amateur championships at the age of 18, defeating the No.1 seed on his way to the last two. He was defeated by now promotional stablemate Sam Noakes in the final.

His performances in his opening bouts as a senior resulted in international recognition and a trial for the GB squad was pencilled in for this spring, only to be put on hold by the current restrictions on sporting participation.

He has now made the decision to turn professional and will be trained by his father Zahiran at the Warrior Breed gym in Dewsbury, having now completed his studies for a Level 3 Sports course at Bradford College.

The now 19-year-old super lightweight insists he harbours no regrets over making an early departure from the amateur ranks.

“No, no, no, I was ready to turn pro straight way,” reported Akbar. “I was going to go to the Elite Championships and I had the GB assessment as well, but as soon as I heard the news about Frank Warren I knew what I was going to do.

“I am delighted to sign because I have been watching Frank and all his fighters for all my life really. I am very happy and I couldn’t believe it.

“Even though I am 18 I have been sparring with pros for a long time and from 16 I was sparring world champions, so I am do not have any reservations over turning pro.

“My family have all been into boxing, my dad used to box a bit and I have always been into it. I have done MMA but boxing just stuck with me and I have gone with it.”

Asked to describe his style of fighting, Akbar considered that he will simply adapt to whoever is put in front of him.

“I have always had a good following and I will do well on tickets. There are lots of amateurs in Dewsbury but I am the one leading the pack now with having such a big promoter.

“I am definitely excited and cannot wait to get going. It has got me through this present time, while I have always been training, but this has given me an extra boost.”

Promoter Frank Warren added: “I am delighted to add another top young prospect to the crop of fighters we have signed recently, who I am looking forward to seeing in action once we are up and running again. Developing young fighters and making them into champions is what we do best and I believe Amaar has the talent to do big things in the sport and really make a name for himself.

Akbar’s first act as a Queensberry fighter was to speak to interviewer Dev Sahni as part of the ongoing Lockdown Lowdown series.