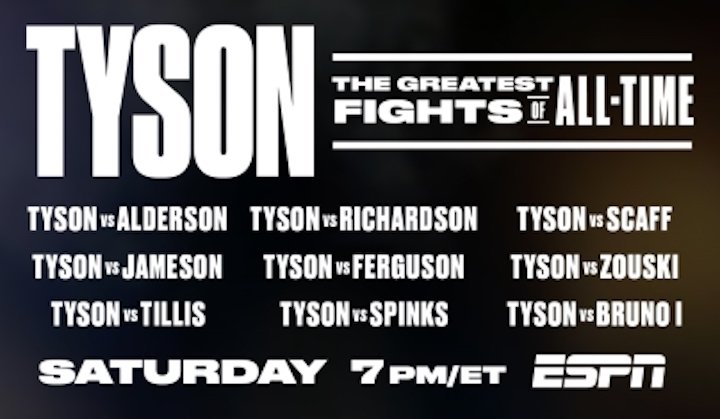 Memorial Day Weekend on ESPN and ESPN+ – ESPN will open its extensive library of vintage boxing matches this weekend to present four hours of “Iron” Mike Tyson in some of the most iconic fights of his legendary career on Saturday, May 23, from 7 p.m. to 11 p.m. ET.

The four-hour block starts with “Mike Tyson’s Greatest Hits – Volume I” followed by four classic fights highlighting the early part of Tyson’s career, which began with 19 straight knockout wins by an average of less than two rounds per fight, before a dominating 10-round unanimous decision over James “Quick” Tillis in 1986. Two of Tyson’s most iconic fights – a heavyweight title bout versus Michael Spinks in 1988 and his first fight with Frank Bruno in 1989 – will round out the night. Six of the fights featured during the four-hour Tyson block are available to stream now on ESPN+ for on-demand viewing.


« Teofimo Lopez Sr: Lomachenko will be EASIER than Commey

Emanuel Navarrete to fight on June 6 in Mexico City »