ESPN2 to Air Some of Boxing’s Most Debated Decisions 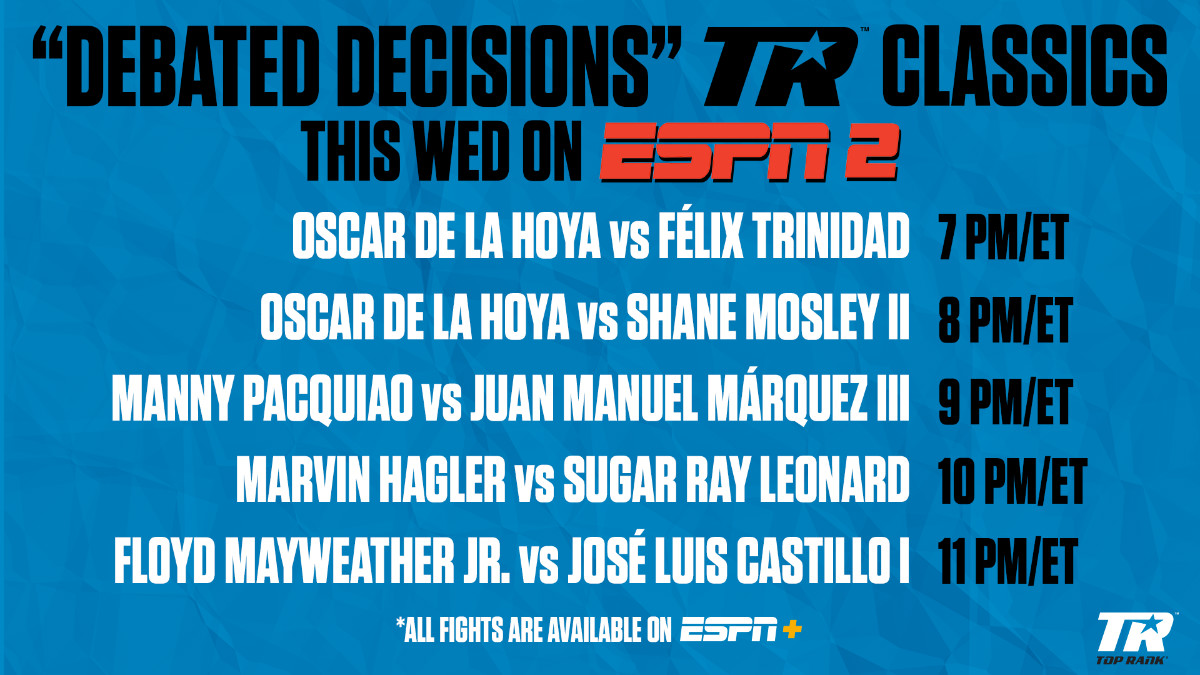 Wednesday, May 20, will be a night of boxing on ESPN2 when the network airs five consecutive hours of the sweet science featuring some of the sport’s most debated decisions. The action will begin at 7 p.m. ET with Oscar De La Hoya vs. Félix Trinidad.

In addition to the linear telecast, all these fights are also available on ESPN+. Exclusively available to subscribers, ESPN+ features a library of hundreds of the most important fights in boxing history.

Oscar De La Hoya vs Félix Trinidad (7 P.M. ET): The two long-reigning welterweight champions and pound-for-pound greats met in the “Fight of the Millennium” on Sept. 18, 1999, with De La Hoya defending his WBC title and Trinidad defending his IBF title. De La Hoya landed 97 more punches (263 to 166), but after 12 tensely fought rounds, Trinidad was controversially declared the winner by majority decision. The bout set the pay-per-view record for a non-heavyweight fight with 1.4 million buys, a mark that stood until it was broken by De La Hoya-Mayweather on May 5, 2007.

Oscar De La Hoya vs Shane Mosley II (8 P.M. ET): In a rematch of their first bout in June 2000 — won by Mosley via split decision — De La Hoya put his WBA and WBC super welterweight world titles on the line against the former welterweight and lightweight world champion. According to CompuBox, De La Hoya landed more punches (221-127) and was the more accurate puncher (36%-26%). Despite De La Hoya winning in the eyes of most boxing experts, Mosley was declared the winner in a controversial unanimous decision.

Manny Pacquiao vs Juan Manuel Márquez III (9 P.M. ET): The only fight of the four between them not to feature a knockdown, Pacquiao and Márquez once again went to a decision in this WBO welterweight title fight. Pacquiao was making the third defense of his title and landed more punches (176-138), but Márquez was the more accurate of the two fighters, according to CompuBox (32%-30%). The bout generated 1.4 million pay-per-view buys in the United States, which was Pacquiao’s best pay-per-view total until his 2015 mega-fight against Floyd Mayweather Jr.

Marvin Hagler vs. Sugar Ray Leonard (10 P.M. ET): Longtime middleweight champion Hagler had made 12 successful defense of his world title before facing the returning Sugar Ray Leonard, who had not fought in almost three years. Leonard, who was attempting to win a world title in a third weight class, built an early lead, but Hagler came on strong late. Ring Magazine named Hagler-Leonard the 1987 Fight of the Year, and the split decision victory for Leonard cemented a comeback for the ages.

Floyd Mayweather Jr. vs. José Luis Castillo I (11 P.M. ET): After eight successful defenses of his super featherweight title, Mayweather moved up in weight for his lightweight debut against Castillo, who was making the fourth defense of his WBC title. According to CompuBox, Castillo out-landed Mayweather 203-157. HBO’s ringside judge, the late Harold Lederman, scored the fight for Castillo by four points. The official judges, however, scored it unanimously in Mayweather’s favor.

ESPN+ features a library of hundreds of the most important fights in boxing history, as well as recent Top Rank on ESPN fight cards for replay, all streaming on demand. The historic fights on ESPN+ include legendary heavyweight showdowns like Ali vs. Frazier III, Ali vs. George Foreman, Joe Louis vs. Billy Conn, Tyson vs. Holmes, Jack Dempsey vs. Gene Tunney, Max Baer vs. James J. Braddock, Ali vs. Sonny Liston I & II, Wilder vs. Fury II and many more.