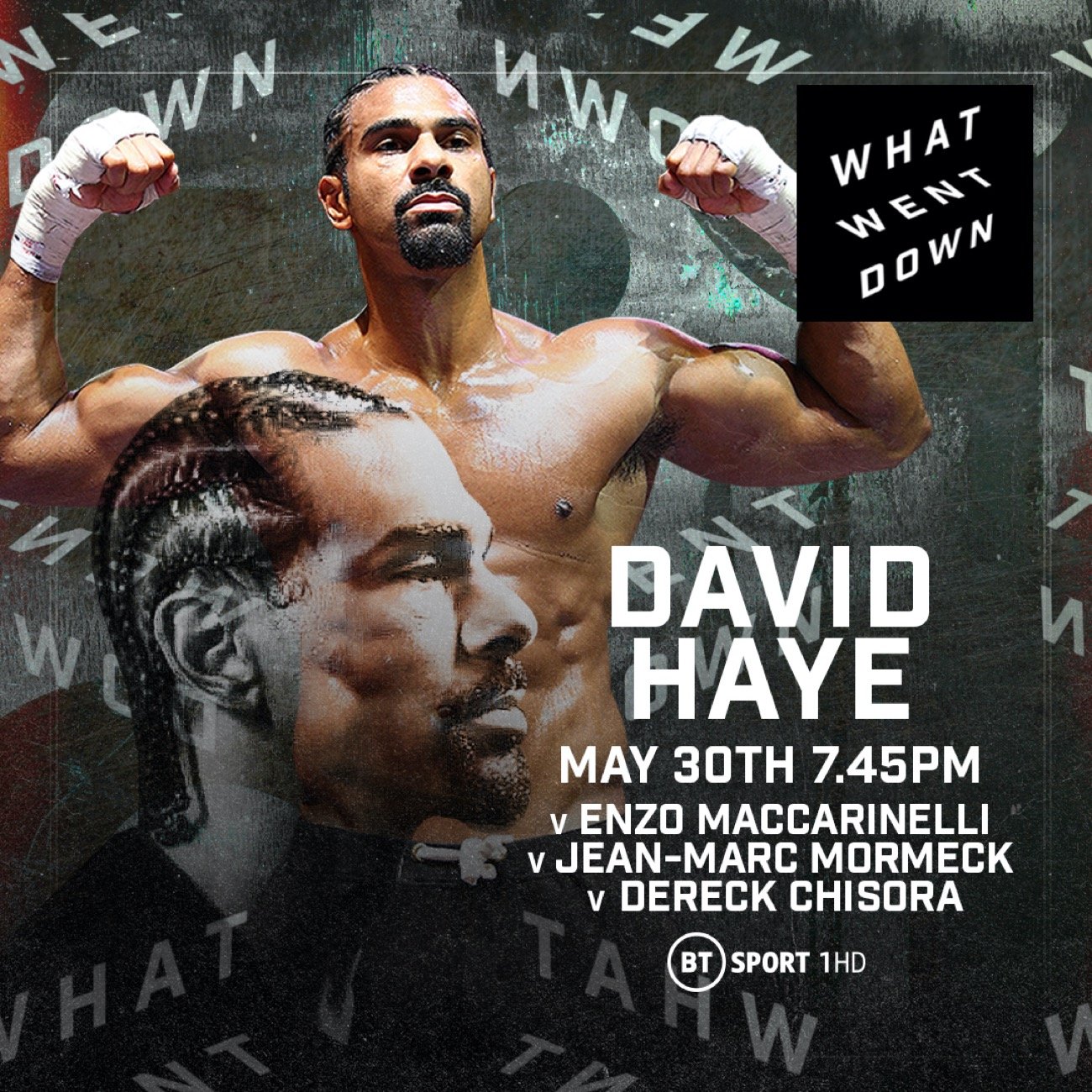 Starting with David Haye, What Went Down is a brand new short series of boxing shows on BT Sport, featuring boxers looking back at their classic fights.

On Saturday night, 745pm, BT Sport will air the first episode of a new series of boxing shows looking back at classic fights with British boxers.

Kicking off with David ‘The Hayemaker’ Haye, the former champion joins Steve Bunce to revisit some of his best fights including his cruiserweight title bouts against Mormeck and Maccarinelli, as well as his memorable match up against Dereck Chisora and all behind the scenes antics surrounding the fight.

Haye and Bunce are joined throughout the show by the likes of Chisora, Adam Booth, Don Charles, Frank Warren and Richie Woodhall, as they analyse the fights, the build ups and of course the aftermaths. Haye and others give insight into the fights, how they were put together and the drama around them.

Looking first at his memorable night in Paris beating Jean-Marc Mormeck for the Cruiserweight World Title, he breaks down this early fight with the help of his former trainer Booth. Moving onto his decision to try to unify by fighting Enzo Maccarinelli, with hero Frank Bruno ringside and opposing promoter Frank Warren even saying he ‘would retire’ if Maccarinelli lost! To finally the drama of that Chisora fight, now friend and mentor, they get together to reveal all on what went down.

This show is a great watch for boxing fans missing the action in the ring.

Next week Steve Bunce will be joined by former World Champion Joe Calzaghe.

GB Boxing’s Lewis Richardson is to combine his plans to compete at Tokyo 2021 with higher education after securing a place to study for a Masters in Sports Business Management at Sheffield Hallam University from September of this year.

The 22-year-old from Colchester in Essex will study part-time at the University which is based in the same city as GB Boxing’s training centre at English Institute of Sport Sheffield as he continues his bid to qualify for the Tokyo Olympic Games in 2021.

Richardson’s decision to combine his studies with boxing is supported by GB Boxing and follows the same path as Joshua Buatsi who studied for a degree in Management and Sport Science at St Mary’s University en-route to winning a bronze medal at the 2016 Olympic Games in Rio.

Richardson explained: “I like a challenge and if I can achieve that as well as making it to Tokyo then I will be incredibly proud of myself. My focus will be very much on boxing however we do get time to rest and recover in training camp so I want to use this and the time I have at weekends effectively to study and earn myself a qualification.

Richardson secured three grade A’s in Business, Sport and Sociology at A-Level and had been keen to continue his studies, particularly after his brother, Deacon, started a Master’s degree.

He added: “University has always been on my radar, but I made the decision to focus on my boxing for a couple of years and achieve my dreams of getting on the GB Boxing squad. Now I have achieved that, I thought it was the perfect time to put my A-Levels to good use as I have an excellent support team around me. I can focus on my dreams of becoming an Olympian as well furthering my education.

“I chose to do a Masters in Sport Business Management because I will have a good base to learn from thanks to my previous grades. The possibilities with a qualification like this are endless and should ensure I have plenty of options in the future.”

GB Boxing’s Performance Director, Rob McCracken said: “A big part of our ethos is that we want everyone to benefit as a person from being part of the world class programme, regardless of what they achieve as a boxer, so we encourage all of the men and women in our squad to take-up opportunities for personal development and education that will help them in their lives outside of and beyond sport.

“We are confident that Lewis has the ability to balance the challenges of training and competing with his education and will fully support him in this.”

Richardson’s application was supported by GB Boxing’s full-time Performance Lifestyle Advisor, James Hooper, who works with the boxers in the squad to help them pursue educational and personal development opportunities.

Hooper explained: “There is a lot of evidence to suggest that having interests outside of sport can have performance benefits for athletes so we try to encourage all of the boxers in the squad to pursue other interests or secure qualifications that will benefit them when the time comes to transition out of sport.

“With Lewis, my role in the initial stages was to provide a safe place to discuss his intentions, as well as explore ideas and to ask effective questions around his motivations for re-entering education.

“I also helped him prepare for the meetings with the course leaders and, where appropriate, acted as a point of contact to facilitate communication between Hallam, Lewis and GB Boxing, who were very supportive of what he is trying to achieve.”

Richardson added: “James has always been there for a chat and to offer support and put me on the right path. I’ve also had plenty of support from the psychologists too and Hannah Levi has helped me make some tough decisions. The coaches have been great as well.

“There is a great atmosphere at GB Boxing. It’s like a big family and everyone is there to answer questions and help you out in any way they can.

“It’s a real team effort. To know that GB Boxing and Sheffield Hallam are backing me all the way gives me great motivation and a real sense of positivity.”

Nonito Donaire motivated for ‘The Takeover’ at 118 »