Anthony Joshua: ‘Tyson Fury is just another opponent for me’ 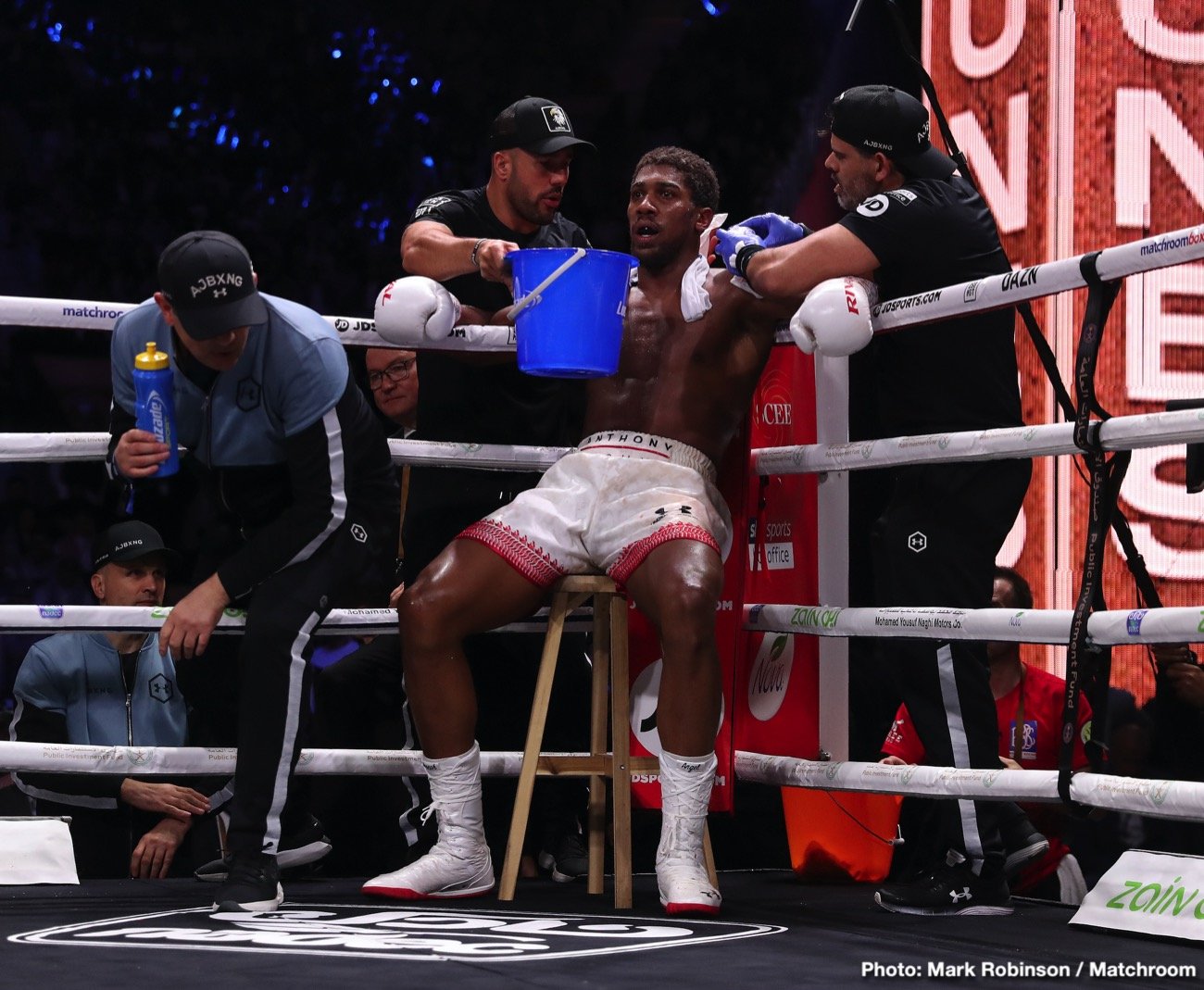 By Charles Brun: Anthony Joshua (23-1, 21 KOs) is calling Tyson Fury “just another fighter,” but he’s still looking forward to the fight. Both of these two giant heavyweights have found success and then watched it all fall apart.

In Fury’s situation, he went overboard in celebrating after he defeated IBF/WBA/WBO heavyweight champion Wladimir Klitschko in 2015, and it cost him three years of his career.

Fury has turned things around, captured the WBC belt, and he has a lot of boxing fans convinced that he’s the #1 heavyweight on the planet.

Joshua (23-1, 21 KOs) saw his career take a hit last June when his replacement opponent Andy Ruiz Jr. stopped him in the seventh round in his U.S debut at Madison Square Garden in New York.

Although Joshua avenged the loss with a one-sided 12 round unanimous decision last December, he didn’t get the credit he should have because Ruiz came into the fight a fat 283-pound blob.

Fury is “just another fighter” – Joshua

“I’m here to make history, and I’m fired up,” said Joshua to @BritishGQ. “Fury is just another opponent. Yeah, it’s going to be big for everyone else, but I got to keep myself together.

“I’m looking at Fury like he’s just another fighter. Trust me. In terms of the spectacle and the trash-talking and two juggernauts coming together.

“I’ve climbed my way back up, and whoever steps in front of me now, I’m not looking to go back down. So when I’m fighting [Kubrat] Pulev, and I get the opportunity to fight Tyson Fury for the WBC championship of the world, they’re going to see what it feels like for a man that had it all and lost it and got it back.

“A man that has experienced that turbulence and doesn’t want to go through it again,’ said Joshua.

It’s impossible to take Joshua seriously when he says he sees Fury as just another fighter. He obviously will be concerned with Fury when the two of them face each other in 2021. Right now, it’s still too early to say for sure that Joshua and Fury will be fighting in 2021. If one or both lose their next fights, then it’s safe to say that they won’t be fighting in 2021.

Fury has NO balance says AJ

“Tyson Fury, you’re either at the top of the ocean, or you’re drowning under it. I don’t know. There’s no balance. I can’t really comment on Tyson Fury’s issues. I’ve got my own opinions and views of that person.

Fury (30-0-1, 21 KOs) has got it together mentally since coming back from near oblivion in 2018, but one destructive loss will likely send him right back to that dark place. If Deontay Wilder knocks Fury out cold in their rematch later this year, it wouldn’t be surprising if he balloons up to 400 pounds again, and loses it in self-pity and food.

It’s predictable to assume that Fury will crumble mentally if he gets knocked out by Wilder or Joshua. Coming events cast their shadows before.

Fury seems to believe that he’s got the win over Wilder in the bag, and could be in for a rude awakening on the night. If some of those right hands that missed Fury from last time had hit him flush, he likely would have been knocked out again.

Before Wilder’s equilibrium was thrown off in round three after being hit with a textbook illegal rabbit punch from Fury, he was throwing scorching right hands that he one-punch knockout written all over them.

Joshua got beat to a pulp by Andy Ruiz

“I got beat. I got beaten to a pulp and had to pull myself back together,” said Joshua in talking about his loss to Andy Ruiz Jr. “Now they’re going to see the rebirth of me.

“Everyone writes me off in this division, but I believe I will go down as this generation’s great. That’s what I’m destined to do,” said Joshua.

Andy Ruiz Jr. (33-2, 22 KOs) did a number on Joshua in their first fight in June 2019 in knocking him down four times, and forcing him to quit on his feet in the 7th. It wasn’t a fight in which Joshua’s face was beaten to a pulp. It was more of a case of Joshua’s being hurt by the concussive punches from Ruiz, who unloaded on him.

It’s clear that if Ruiz had come into the rematch in shape last December, he would have chased Joshua down and battered him into submission a second time. Joshua looked terrified the entire fight and spent much of the time, either holding or running.

That strategy would have been easy for Ruiz to nullify if he was in good shape and if he had a trainer that he listened to. If Ruiz came into the fight in the low 250s, and if he had cut off the ring faster, he would have forced Joshua to exchange with him more. Also, Ruiz needed to throw four-punch combinations when he was near Joshua.

He didn’t do that in the rematch because it looked like he was trying to keep from gassing out. Ruiz also let Joshua grab him in a clinch all night long, and he didn’t attempt to keep throwing while being held. Ruiz was giving up and taking rest breaks when Joshua would hold him. 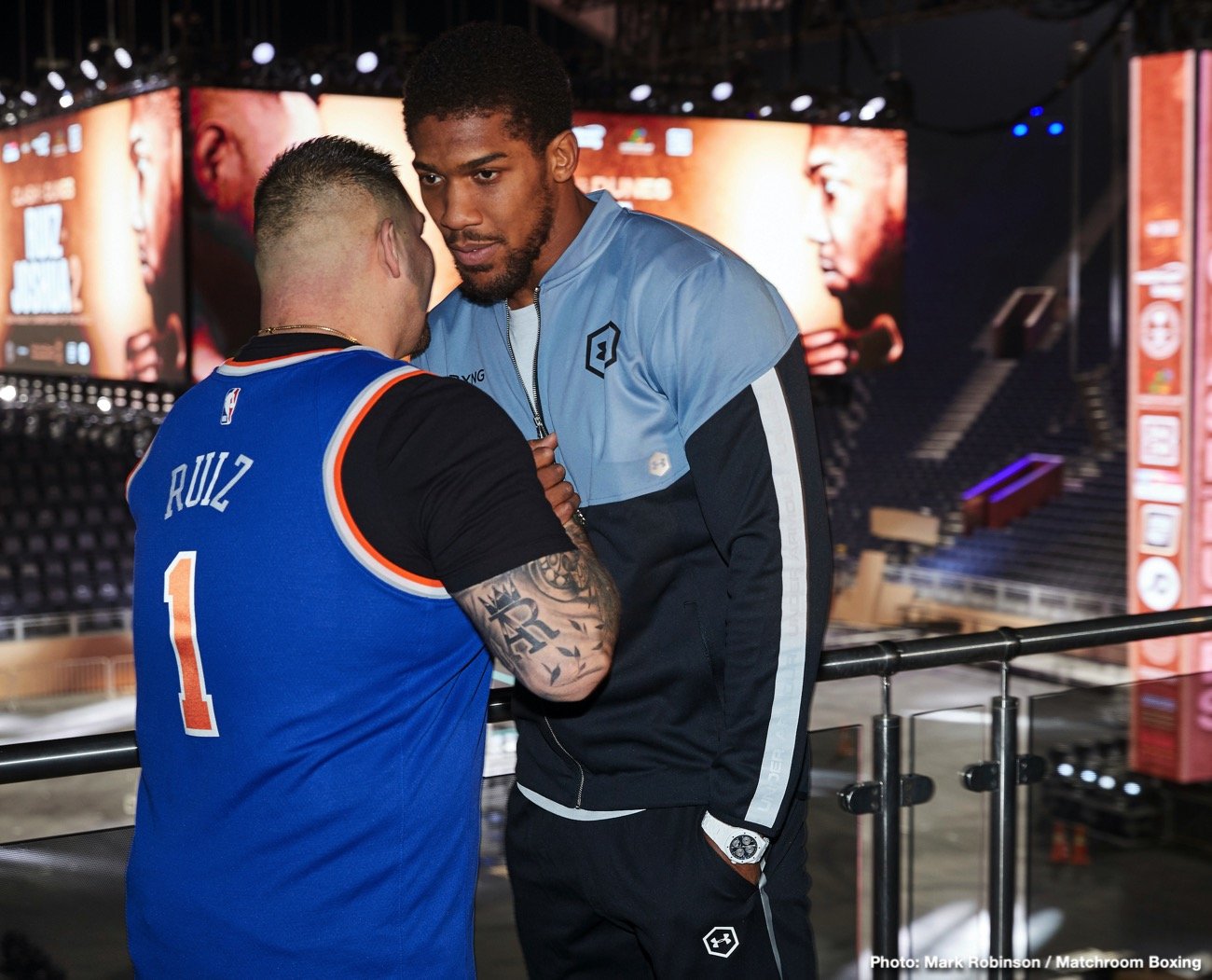 “Why am I hanging on with Pulev?” said Joshua. “So there are five belts. IBF, IBO, WBA, and WBO. They belong to me. Tyson Fury has the WBC. Each of thee governing bodies has a ranking. So let’s say, one to ten, and with the IBF, Pulev is number one.

“That’s the next belt that I have to defend, so that’s why Pulev is my mandatory. If I don’t defend against Pulev, then the IBF will be removed from me, and then Pulev will fight [for the vacant IBF strap]. Do you know who the next mandatory challenger is? Charles Martin.

“That’s the guy that I won the [IBF] belt from [in 2016]. So if I don’t fight and defend my belt, then it’ll be Pulev, and Charles Martin will fight. And so these are the obligations that you have to follow as a champion,” said Joshua.

Giving up the IBF belt wouldn’t lessen the amount of interest in a future fight between Joshua and Fury. But for some reason, Joshua has his head wrapped up in the belief that he needs to capture all the major titles.

Joshua may have the mistaken belief that unifying the heavyweight division will validate him in the eyes of the casual boxing fans. It won’t.

Fans are too busy with their lives to be concerned about whether Joshua has one or all four of the major titles. It hurts Joshua’s career that he’s slowing up the momentum that he’s built up with his recent win over Andy Ruiz Jr. to defend against his IBF mandatory Pulev (28-1, 14 KOs), who the casual fans aren’t familiar with.

The hardcore boxing fans see the 39-year-old Pulev as an older fighter, who is the token lamb for Joshua to slaughter in a showcase fight.