Thurman fires back at Broner 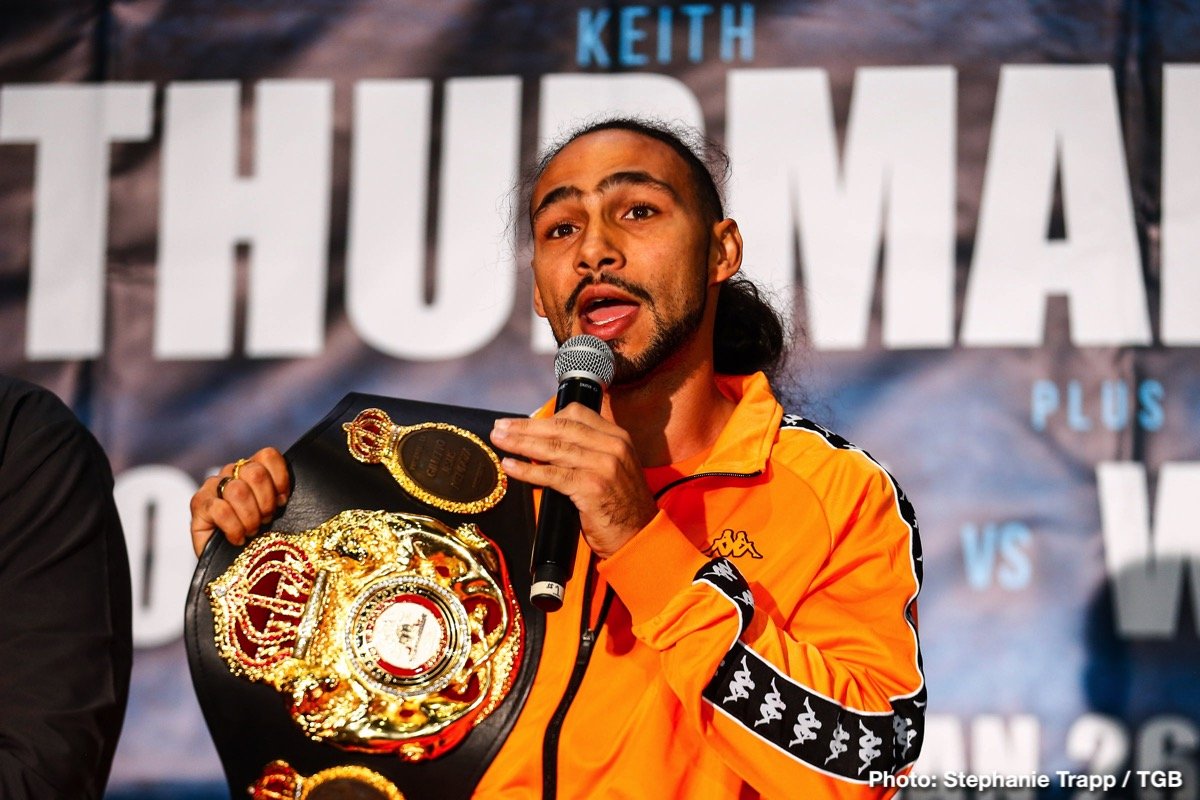 By Chris Williams: Former WBA/WBC welterweight champion Keith ‘One Time’ Thurman fired back at Adrien Broner after learning that he said he would “end him” in two rounds. Thurman (29-1, 22 KOs) said Broner (33-4-1, 24 KOs) doesn’t throw enough punches to stop him. His low work rate won’t get the job done.

Broner, 30, is looking to get $10 million from Al Haymon and Stephen Espinoza for him to come out of retirement. A fight against Thurman might be a big enough one to get the big money he’s looking for.

Thurman goes off on Broner

“AB ends me in two rounds? Oh my gosh,” said Thurman on Broner on social media. “AB doesn’t end his grandma in two rounds. I bet AB’s children slap him back, OK?

This is a fight that should have been made a long time ago. Both Thurman and Broner are coming off losses to Manny Pacquiao. They could use a win right now. Thurman lost to Pacquiao by a 12 round split decision last July, whereas Broner was beaten by a 12 round decision in January 2019.

Picking a winner between Thurman and Broner isn’t as easy it would seem. Thurman hasn’t looked great since his win over Danny Garcia in 2017, and he was only impressive for the first six rounds. In Thurman’s two fights since then, he’s looked like a shell of his former self against Josesito Lopez and Pacquiao.

If the two performances from Thurman is indicative of what he’s got left in the tank after a 13-year pro career, then Broner will have a great shot at beating him.

Thurman vs. Broner an easy fight to make

With Broner and Thurman in quarantine right now, they need to be staying in shape so that the two of them will be ready to rebound quickly when the sport starts back up.

It’ll be an easy fight to make for Haymon in putting Thurman and Broner in with each other. The winner of the battle would be in an excellent position to get a rematch with Pacquiao.

They should have already fought. For Thurman, he’d been a world champion from 2015 to 2019. The fact that Broner would lose now and then has erased the possibility for Thurman fighting him. However, now that Thurman has suffered his first loss, he’s in a similar position as Broner.


« Keith Thurman: ‘Errol Spence NEVER went to Haymon to ask for the fight’