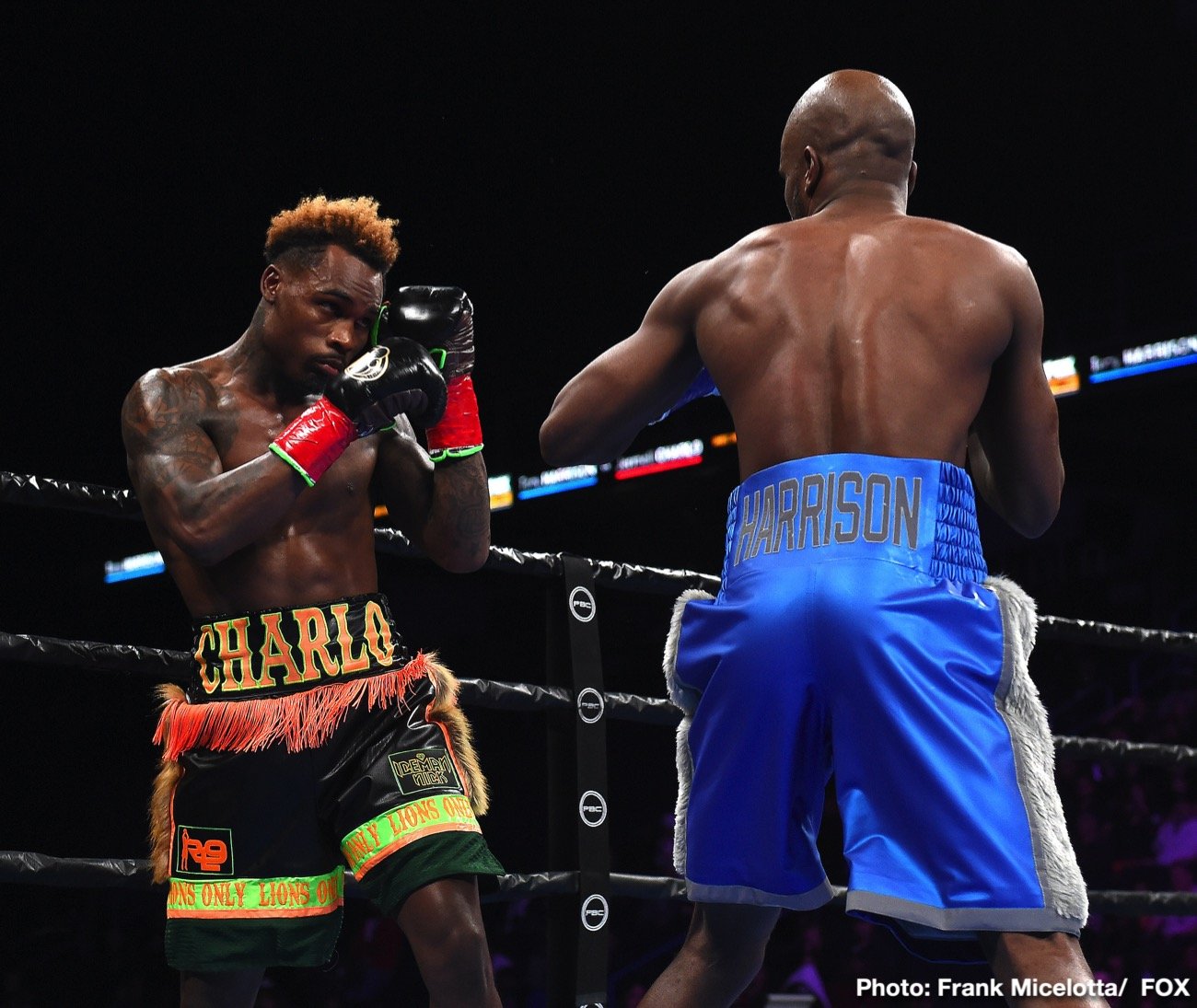 By Chris Williams: Promoter Bob Arum spoke this week on the verbal clash between his fighter Terence Crawford and Jermell Charlo, and he says he’s “in favor” of putting that match together. Arum is leaving it up to Crawford (36-0, 27 KOs) if he wants to move up to 154 to take on WBC champion Charlo (33-1, 17 KOs).

Crawford, 32, wants a big fight to get the attention of the boxing world, and he’s got the opportunity with Jermell to put his name out there. It would be a much different fight for Crawford.

Unlike the opposition that his promoters at Top Rank Boxing have matched him against in the last eight years, Charlo would be a risky opponent. He’s in a different class than the guys Arum has put Crawford in with.

“Charlo is an American, and he’s certainly better known. A Charlo fight with Bud would be a much more attractive event,” said Arum of Top Rank to The Boxing Voice on a fight between Crawford and Jermell. “As a promoter, I look first if a fight would appeal to people, and there it’s clear.

“What’s not to appeal?” Arum said on a Crawford vs. Charlo clash. “Charlo is a terrific fighter, he has a lot of exposure, and a lot of people would be interested in that fight.

“Again, I haven’t talked to Bud about it. I wasn’t aware of this conversation until you raised it, but if that’s what Bud wants to do, I’m in favor,” said Arum about Charlo and Crawford fighting.

Crawford wants to fight Errol Spence Jr. or Manny Pacquiao, both of which are two of the best in the sport. The 6’0″ Jermell fights at 154, and he would have a size, power, and hand speed advantage over Crawford.

In the last two years, Crawford has fought these welterweights: Egidijus Kavaliauskas, Amir Khan, Jose Benavidez Jr., and Jeff Horn. They all had one thing in common: None of them were a threat to Crawford.

“Bruh stop telling me to keep your name out my mouth, there’s only one way to do that.. ight.. like I said you a cool “boxer,” imma pretend you didn’t mention me, but hey man, say man I got time. But believe me when them LIONS at ya neck, please don’t retreat.”

Charlo felt the need to put Crawford in his place after he told him ‘Keep my name out of your mouth.’ That warning from Crawford was the equivalent of waving a red bandana in front of a bull. Charlo immediately checked Crawford in losing him know, ‘There’s only one way to do that.’ At that point, Crawford appeared to back off, and the brief war of words between him and Charlo ended. Some would way that Crawford lost his nerve when confronted by the lion Charlo. 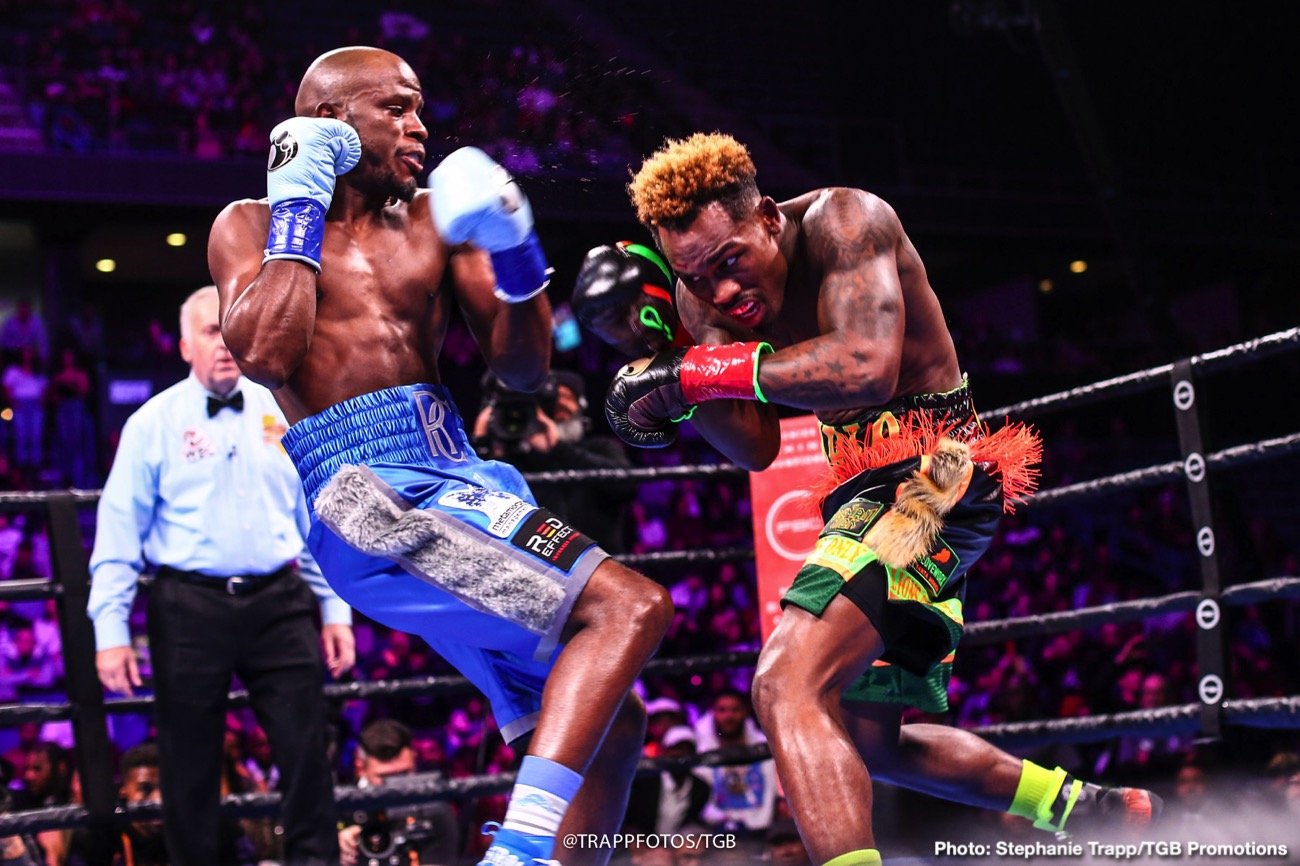 “Terence Crawford has got all the tools, and he’s just a phenomenal fighter,” said Tony Harrison to AB Boxing News when asked about Bud and Jermell trash talking. “When you’re a boxer, you have to be a student to. When you look at the fight with Charlo and me, did you see how much I was pushing him back?

“He’s physically not that strong, and he got pushed back the whole fight. As far as boxing skills from the outside, he won’t beat Crawford. I think that’s a good fight for Crawford. I would love to see any competitive fight, you know? When it comes to skills, Crawford is at the top of the line.

It sounds like Harrison is still a little bitter about his recent 11th round knockout loss to Charlo on December 21 in their rematch. Harrison gave it a good try, but he didn’t have the chin to stand up to the big power shots that Charlo kept hitting him with throughout the fight.

The warning signs were there early on that Harrison was going to be in for a long night when he got dropped in round two by Charlo. In the 11th, Charlo knocked Harrison down twice more to get the knockout. Harrison went through a lot in that fight, and it’s understandable why he’s not too praising his conqueror Charlo and giving him credit.

“Jermell Charlo, kudos to him. If you put him in front of me, he’d find a way to win. But I think it’s [Charlo vs. Crawford] would be a great fight for the world and boxing. But I think Terence Crawford wins that easy,” said Harrison.

The way that Crawford struggled against Benavidez, Khan, and Egidijus Kavaliauskas suggests that he would be over his head against a knockout artist like Charlo. Half the battle for Crawford would be for him to agree to take the fight with Charlo in the first place.

Arum can’t drag Crawford into the fight with Jermell if he doesn’t fancy it. Crawford has got to WANT to fight Jermell for the match to happen, and right now, it doesn’t appear that he’s in the least interested in facing him.

This Crawford’s predicament: He wants to become a superstar, but he’s not shown the willingness to take risks to get to that level. In other words, Crawford hasn’t dared to be celebrated like the legends of the past. Arum says Crawford is another Sugar Ray Leonard, but he’s doing the things that he did during his career in terms of risk-taking.

Leonard, who fought at welterweight, went up to 160 and beat middleweight champion, Marvin Hagler. Crawford hasn’t even moved up to 154, let alone gone up to 160 to mess with world champions Gennadiy Golovkin, Canelo Alvarez, and Jermall Charlo.

Crawford could increase his popularity overnight if he took on and beat Jermell Charlo. Of course, if Crawford is going to play it safe and stay at 147, he’ll stay where he is as the perceived #2 welterweight in the division behind Spence.


« Malignaggi DOUBTS Mayweather has patience to be trainer