By Chris Williams:  Terence Crawford reacted in less than friendly manner after learning that former welterweight champion Keith ‘One Time’ Thurman dared him to send him a contract, and he’ll sign it.

Unfortunately for Crawford,  Thurman changed his mind about wanting to face him next. Thurman says Errol Spence is the bigger fight than Crawford because he has two titles, and he also wants to fight Manny Pacquiao.

He lost to Pacquiao last July, and he wants to avenge that loss. It’s perfectly reasonable for Thurman to want an immediate rematch with the Filipino star so that he can avenge his only career loss.

Crawford reacted predictably on social media in telling Thurman to “Shut up” and stop using his name. He doesn’t want Thurman to be name dropping to get put on the same level as him. In fairness to Thurman, he’s using the scattergun approach right now in naming as many top fighters as he can in hopes that one of them will give him a fight.

“@keithfthurmanjr, shut yo a** up. You don’t know what you want to do because I bet you if the contract were sent, your a** would find a way out. So stop playing with my name,” said Crawford on his Twitter.

You can’t blame Thurman for throwing Crawford’s name out there, but then letting fans know that he’s not #1 on his list. He’s more like #4. So if Thurman whiffs at his attempts at getting any of the top guys from his list to fight him, then Crawford could be the guy.

Thurman has the punching power and hand speed to beat Crawford, but the politics of boxing could make this fight challenging to put together.

‘One Time’ Thurman has bigger fish to fry

Thurman (29-2, 22 KOs) wants to face Manny Pacquiao and Errol Spence Jr. in his next two fights. There’s nothing wrong with former WBA/WBC 147-lb champion Thurman wanting to fight Pacquiao or Spence next.

They’re both with PBC, and those easy fights to make. Additionally, Pacquiao is still a massive star in the boxing world, and Thurman can gain a lot more attention from fighting him than Crawford. The money fight for Thurman is a rematch against Pacquiao. 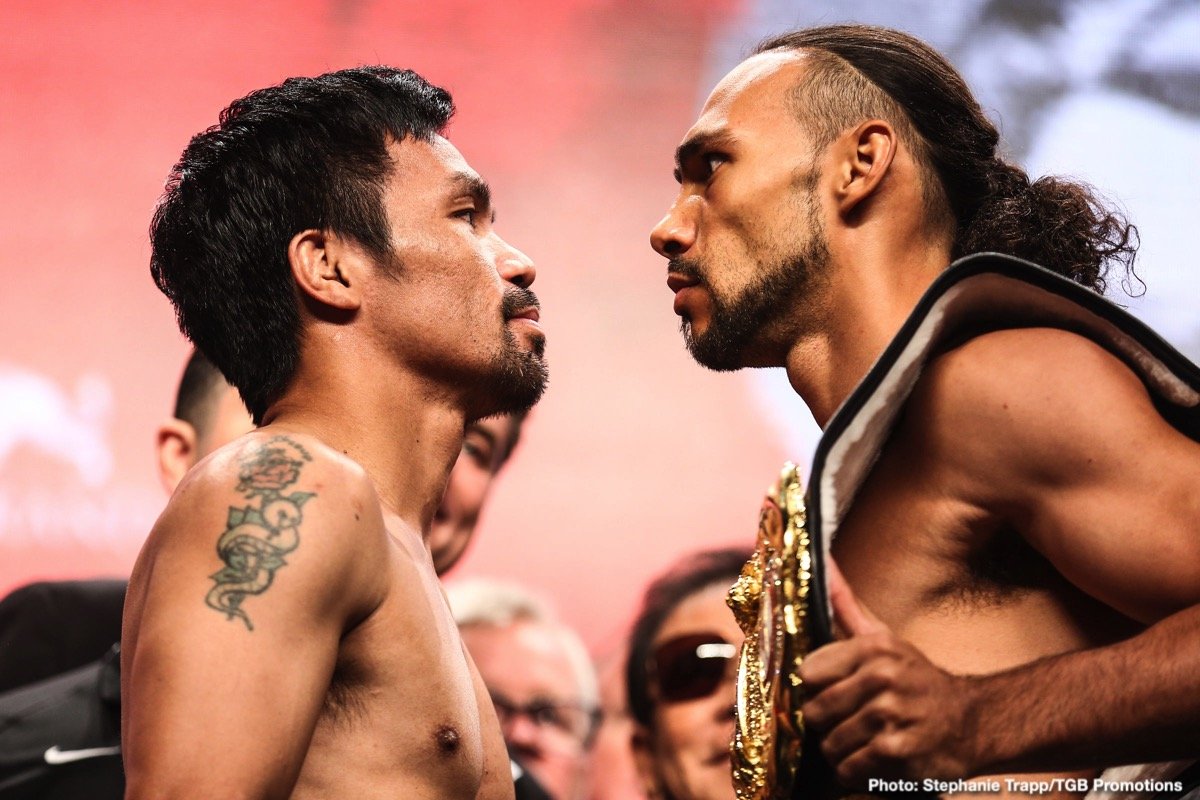 “Let me get back into the ring in November or December,” said Thurman to Premier Boxing Champions in talking about when he wants to fight next. “The ball’s in his court,” Thurman said of Pacquiao. “I just don’t see somebody else really giving him a great fight.

“I also believe I deserve the rematch, from being the undefeated welterweight champion at the time. It wasn’t in my contract, but everything’s up for negotiation.”

“This time has given me more time to prepare and line up with his future date,” said Thuman about Pacquiao.

If Thurman can make it out of a training camp in one piece, then he has a good chance as any to fight Pacquiao. His only competition is Mikey Garcia, who is pressing hard to get Pacquiao to fight him. It’s debatable which of those two would be the bigger fight for Pacquiao.

Both Thurman and Mikey will bring in a lot of pay-per-view buys. Thurman would be better at selling the fight, but Mikey has a large fan base that would the in to see him and Pacquiao battle it out.

Thurman’s loss to Pacquiao might make him the wrong choice for his next fight. Pacquiao would need to be motivated for a second clash with Thurman, and that would be hard for him to do because he hasn’t fought.


« Thurman to Terence Crawford: ‘Send the contract and I’ll sign it, but Spence is priority’