By Allan Fox: Earlier this year, Floyd Mayweather Jr dropped hints that he would be returning to the ring for potential fights against Conor McGregor and Khabib Nurmagomedov. However, with two deaths in Mayweather’s family and the coronavirus striking the world population, a comeback from the 43-year-old Floyd this year is out of the question.

Fans want to see Mayweather fight against REAL boxers with talent instead of MMA fighters with no boxing experience. Mayweather has been talking about wanting to fight both McGregor and Khabib on the same night. It would be expensive for fans to order the fights, but there would be enough of them for Mayweather to make massive money in non-competitive matches.

Next year, it’s probable that the former 5-division world champion Mayweather (50-0, 27 KOs) will be fighting again to add to his 51-0 record the easy way against an MMA fighter. It’ll count as a win as long as the Nevada Commission sanctions the fight as counting as a professional match like they did when Floyd broke Rocky Marciano’s 49-0 record against McGregor, who was making his pro debut in boxing with a 0-0 record.

Mayweather received massive criticism for fighting a non-boxer to break Marciano’s record, but boxing is kind of lax in that respect. Had Roger Maris broke Babe Ruth’s home run record playing against a pitcher that had never pitched a game in his life, fans would scream bloody murder and say there should be an asterisk next to Roger’s record. Boxing is different.

Floyd has made his money already

“Mayweather’s uncle and former trainer past away, and Josie Harris, the mother of his three children, she passed away as well,” said Chris Mannix to DAZN. “So Mayweather likely isn’t going to come back in 2020, but Sergio, do you want to see Mayweather come back at all?”

“Floyd Mayweather, no, I don’t want to see him fight again,” said Sergio Mora. “Look, he’s 50-0. He broke Rocky Marciano’s record. That’s it; give it up. He made a boatload of money. He has a stable of fighters he can manage. Gervonta Davis, he’s supposed to be the next Floyd Mayweather, the guy on the big stage like that.

“He’s almost there, but he’s having problems with his personality outside the ring, and that’s where Floyd Mayweather can come in like a mentor, taking him under his wing. ‘I’ve been there, I’ve made this money, let’s get to that stage, and then maybe you can mess around a little bit more.’ But right now, Floyd needs to concentrate on him as a man and not him as a boxer,” said Mora on Mayweather.

Sadly, Mayweather’s last fight against a real boxer was a shot, Andre Berto, in 2015, and that was a poor fight. At the time, people wanted Mayweather to fight Keith ‘One Time’ Thurman or face Manny Pacquiao in a rematch, but he went soft by fighting Berto.

Boxing fans still want to see Mayweather fight in high enough numbers for him to return to the ring, but they also want him to fight top-level fighters. They don’t want to see Mayweather in mismatches against MMA guys that would likely be destroyed by amateur boxers of even mid-level skills. McGregor and Khabib have no business fighting a professional boxer, especially someone like Mayweather.

Mayweather should return against a top opponent

“When Mayweather retired several years ago, he was considered the #1 pound-for-pound fighter in all of boxing. When you look at pound-for-pound lists now, they list Terence Crawford as #1 or #2 or #3 on that list.

“They list Errol Spence inside that top 10. What better way for Floyd Mayweather to come back then to do it against someone capable of taking his place on that pound-for-pound list.

“I know he’s[Mayweather] been out of the game for a long time, but don’t give me that Rocky Marciano crap. That’s not a real record. That’s not real. Several fighters have gone passed 50-0 only to lose a little bit later in their careers.

“Julio Cesar Chavez Sr. was well past that when he suffered his first loss, so that doesn’t matter. If Mayweather wants to return, I say, ‘Come on back.’ Even at 43 or 44-years-old, but do it against a top opponent,” said Mannix.

If Mayweather were made from the same cloth as Sugar Ray Robinson, he would come back against an elite level fighter like Thurman, Errol Spence Jr., or Crawford, but he’s not that type of fighter. Even during Mayweather’s prime, he wasn’t fighting guys when they were at their best, like Pacquiao. He never fought Kostya Tszyu, Antonio Margarito or Paul Williams.

Floyd can protect his 50-0 record by not coming back

“Have you seen ‘Coming to America’ Chris Mannix? It’s always the white man bringing up Rocky Marciano, and you’re going against that,” said Mora. “Rocky Marciano, everyone loves him and his power. They made a movie, ‘Rocky,’ because of him and everyone knows that. What are you talking about?

“It’s an important record [Marciano’s 49-0 record], and he [Mayweather] broke it somewhat in a way you can criticize it [by fighting UFC star Conor McGregor, who was making his pro debut in boxing at 0-0] by fighting an MMA fighter. But still, 50-0, and Floyd Mayweather has that record now,” said Mora.

“How about 50-1, and it ruins his whole legacy, and blemishes his career and his perfection? No, no, no, leave it at that,” said Mora in continuing on Mayweather. “He’s already been there and done that. So leave it at that, and continue as a man, a promoter and a businessman, but not as a fighter,” said Mora.

“See, your attitude on this is everything that’s wrong with boxing because boxers should look for the biggest challenge, and not worry about blemishes on their record,” said Mannix in criticizing Mora for sounding like he’s enabling Mayweather. “That’s what Sugar Ray Robinson did when he lost 19 times.”

It’s almost certain that Mayweather will come back in 2021, but it won’t be against an elite level boxer. Mayweather has already ruled out fighting boxers. He’s now just providing entertainment for casual fans that like to see him fight famous MMA fighters. 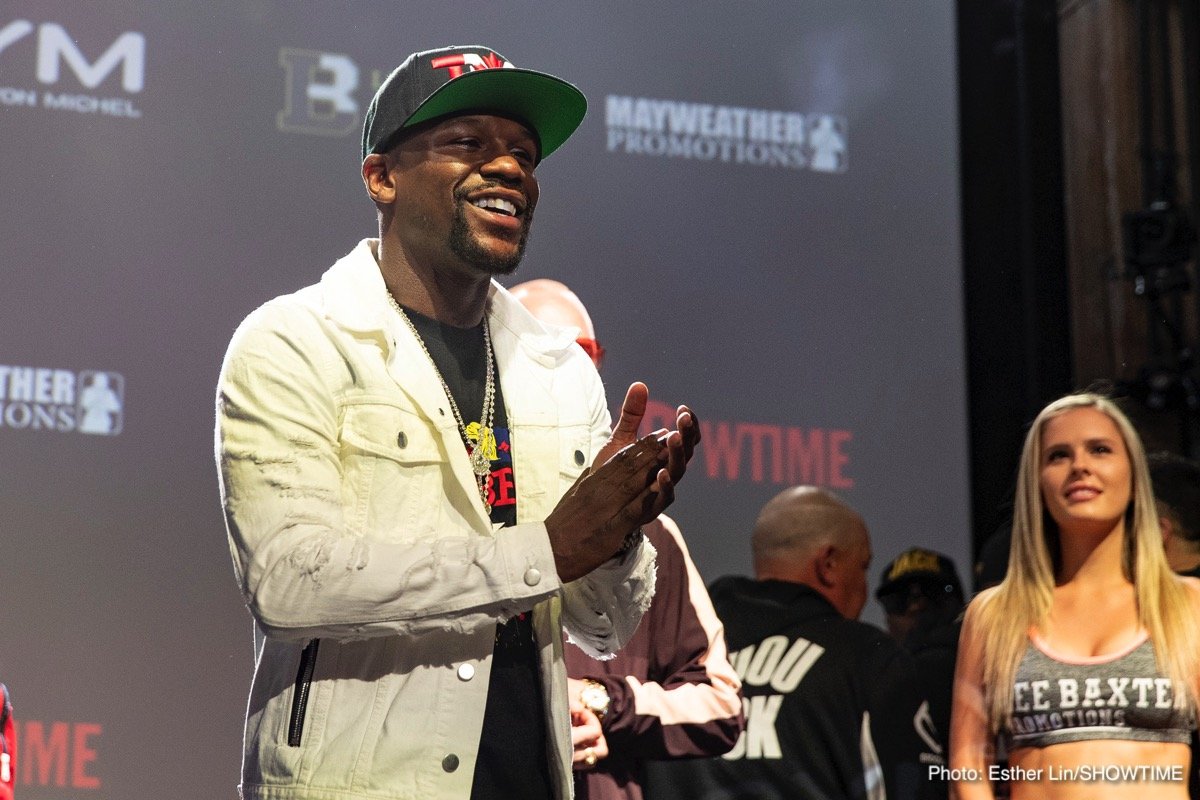 “The guy [Robinson] fought Jake LaMotta 6 times in his career,” said Mannix. “Muhammad Ali lost five times. The best always want to fight the best. So I wouldn’t look at it as a blemish at all [if Mayweather were to lose his unbeaten 50-0 record]. If in his early 40s, Mayweather came back and fought a top opponent, I would look at it as bravery and toughness on the part of a great fighter,” said Mannix.

“Bravery and toughness doesn’t pay the bills,” said Mora in continuing to back Mayweather. “If you write a terrible article, you’ll be able to write for someone else. That’s not the case for fighters. One bad loss, especially a knockout loss, it does damage, not only to you and your confidence moving forward, but it breaks the momentum.

“The fans don’t think you’re as special as you were. A loss is a big loss, especially if its by knockout. But you write a [bleep] article, no one cares. You do it all the time,” said Mora.

“You unbelievable idiot,” said Mannix to Mora. “I can’t write crappy articles and not get fired by my employer. That’s not how the world works.”

As old as Mayweather is, his legacy wouldn’t be hurt if he returned to boxing and lost to an elite level fighter like Spence, Pacquiao, Crawford, or Thurman. Roy Jones Jr. hasn’t taken a high with the many losses he’s suffered after he was over-the-hill. 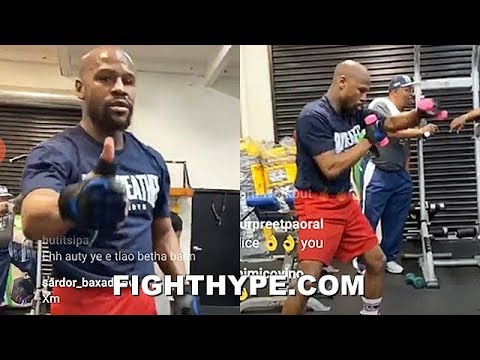