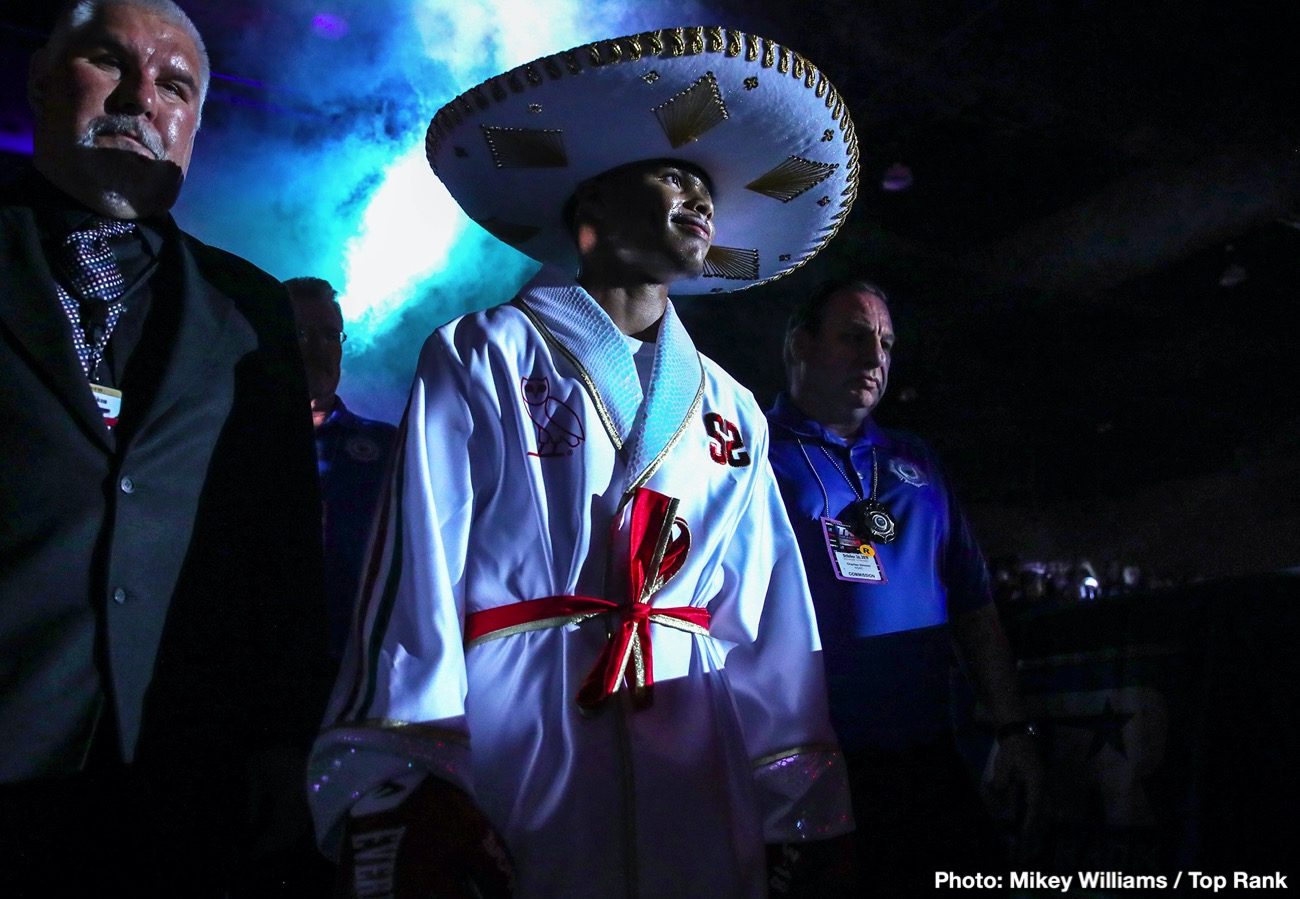 By Kenneth Friedman: Shakur Stevenson is moving up to 130 and will take over the entire division, starting with Oscar Valdez or Leo Santa Cruz. Those are the two top names that Stevenson (13-0, 7 K.O.s) is targeting after he moves up in weight.

2016 Olympic silver medalist Stevenson still holds the WBO featherweight title, and he was holding onto it so that he could face IBF 126-lb champion, Josh Warrington, in a unification clash. However, Warrington’s promoter Eddie Hearn made it known last month that they’re going in a different direction in setting up a unification match against WBA secondary featherweight champion Can Xu.

It’s not a great fight in terms of attracting interest from the British and worldwide boxing fans, but it’s one that Warrington has a better chance of winning than if he were to fight Stevenson.

For Stevenson to take over the super featherweight division, he’ll need to beat these fighters:

“Yeah, I’ll fight at 130 in my next fight. I was staying to fight Warrington depending on how long the wait is, but it doesn’t seem like that’s what he wants,” said Shakur Stevenson to IFL TV. “He’s [Warrington] talking about fighting Cn Xu.

“They already got a deal set-up. If that’s what he [Warrington] wants to do, then I’ll jump straight up to 130 because I don’t have a choice. After all, that’s the fight I was chasing.

“I’m a top guy. All the fans kept talking about Warrington and myself. I don’t have any choice but to go up to 130.  And I didn’t hear anything, and now I hear he got a fight [against Can Xu]. I was willing to come to the U.K. still, and I was ready to fight in March and then come back in May if that’s what I must do.

“And I wanted to work with him, but I didn’t want to wait until May to fight. I fought in October, and that would be a real long time until my last fight,” said Stevenson.

One problem that Shakur has with Warrington is the British fighter brings in massive amounts of British boxing fans for his fights in Leeds in the U.K. The fans don’t seem to mind that Warrington is fighting nobodies. They’re just happy that he’s a world champion and making successful title defenses.

Stevenson is better off forgetting about Warrington and focusing on fighting the more prominent names that the U.S. boxing fans know about and are interested in seeing. There are arguably much better fighters than Warrington at 130.

If Stevenson is going to become a star, he’s going to need to face the top 130-pound fighters that the casual boxing fans are familiar with rather than worrying about Warrington. 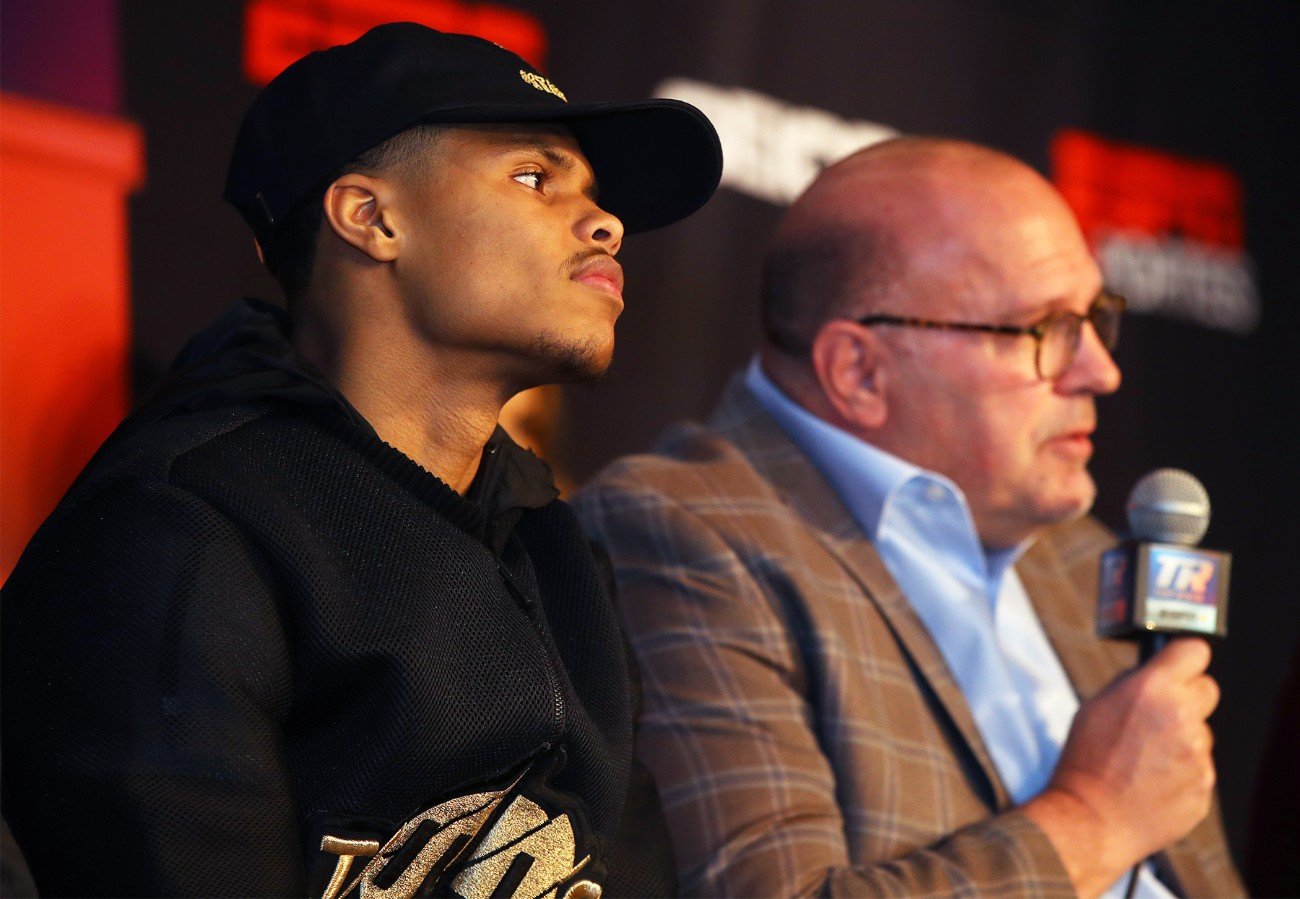 “We got unfinished business,” said Stevenson on Oscar Valdez. “I want his title [WBO super featherweight], and got his [old] title. I know he’s got to feel some kind of way about it now that I’m at his weight class. It’s like, ‘what do you want to do?’

“He [Valdez] don’t got no belt. That would just warm me up for the other champions at 130. But he doesn’t got no belt, but I’m still willing to fight him early. I think it would be a big fight for the fans anyway,” said Shakur.

Top Rank Boxing promoter Bob Arum will be matching Valdez up against WBC super featherweight champion Miguel Berchelt either this year or in 2021.

To get a fight against Valdez, Stevenson will need to wait until the smoke clears from his battle against Berchelt. If Valdez loses to Berchelt, then Stevenson forget about fighting him.

Top Rank will rebuild Valdez if he gets beaten by the talented Berchelt. In that case, the guy for Stevenson to go after is a fight with Berchelt. Hopefully, Top Rank doesn’t block Stevenson from fighting Berchelt.

There would be some worry there potentially of Berchelt beating the 22-year-old Stevenson too, and messing up Top Rank’s plans for turning him into a star. It’ll be a hard hit for the promotional company if Valdez loses to Berchelt, but if Stevenson is beaten by him as well, they would have two of their fighters that need to be rebuild.

That’s the massive downside of Top Rank choosing to do in house fights with stable guys. When they pick each other off, Top Rank ends up hurting their revenue streams. It would be better for the promotional company to match their fighters against NON-Top Rank fighters so that they can have more revenue coming in.

“What’s Santa Cruz’s hometown? Cali? I respect him as a champion too. If that’s the case, I’ll go to L.A., where all his Mexican fans are at [to fight Santa Cruz]. I’ll go beat him up. But that’s just a hope that if he don’t fight Tank,” Stevenson said about Santa Cruz.

“I have been on the game with Tank. The only thing with that is, can he make 130 again?” said Shakur when asked about his thoughts on a fight between Tank Davis and Ryan Garcia.

It will be surprising if Stevenson gets a fight with Santa Cruz. It would be helpful in a perfect world for Stevenson, and Santa Cruz were to fight, but it’s unlikely to happen. Stevenson needs to keep his focus on the fighters that he has a real shot at facing like this bunch: 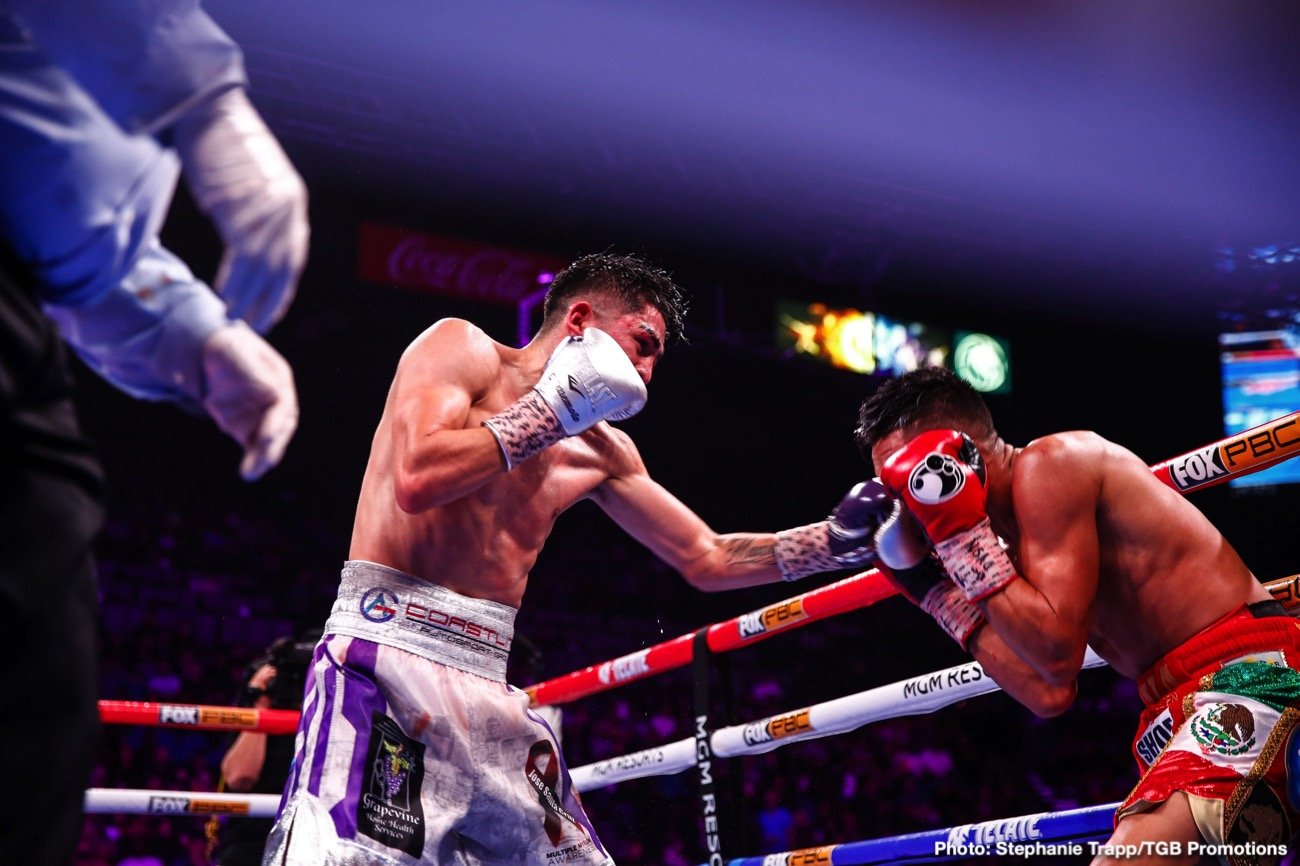 “With him [Tank] and Ryan Garcia, I think that would be a good fight,” said Stevenson. “Neither of them has fought crazy competition, but I think Tank will win that.”

Tank is looking unstoppable right now, but that could change in the future as Ryan matures. The weight problems that Tank has been experiencing could hurt him when he faces Ryan in the future.

WBA secondary lightweight champion Gervonta ‘Tank’ Davis and Ryan Garcia will fight each other at some point, but it’s not expected to happen soon. Ryan is doing an excellent job of talking up the Tank Davis fight, but his promoters at Golden Boy Promotions aren’t going to make that fight.

Mayweather Promotions will likely block the clash as well because they want the fight to marginate. The 25-year-old Tank Davis has too much experience, and maturity for Ryan at this point in their respective careers, and Golden Boy are probably aware of this. That’s why there hasn’t been any movement in making that clash.

Ryan is perhaps a better talker than he is a fighter, and he could be exposed in the future when he finally faces a good opponent.

“Yeah, that’ll be my first potential fight there if I can’t get a big name in the ring like Oscar Valdez or any of those top guys,” said Stevenson about Miguel Marriaga possibly being his next opponent at 130. “It sounds like they [the top super featherweight] all got someone they got to fight first.

“All these guys are talking about fighting. Jo Jo [Diaz Jr.] has got to do a rematch with Tevin Farmer. So who can I fight? If I can fight anybody, I’ll probably fight Marriaga at 130. It depends on how he feels about fighting me without a belt.

“None of them can beat me. I just came to 130, and I know for a fact that I’m the top dog at the weight class. Everyone is going to see. I’m going to take over the whole 130 weight class division,” said Stevenson.

There are a lot of guys that Shakur will need to beat for him to take the top spot at super-featherweight. It’s not enough for Shakur to call himself #1 at 130. He must go out and prove it by beating the best in the division.

Stevenson has recent wins over these fighters: 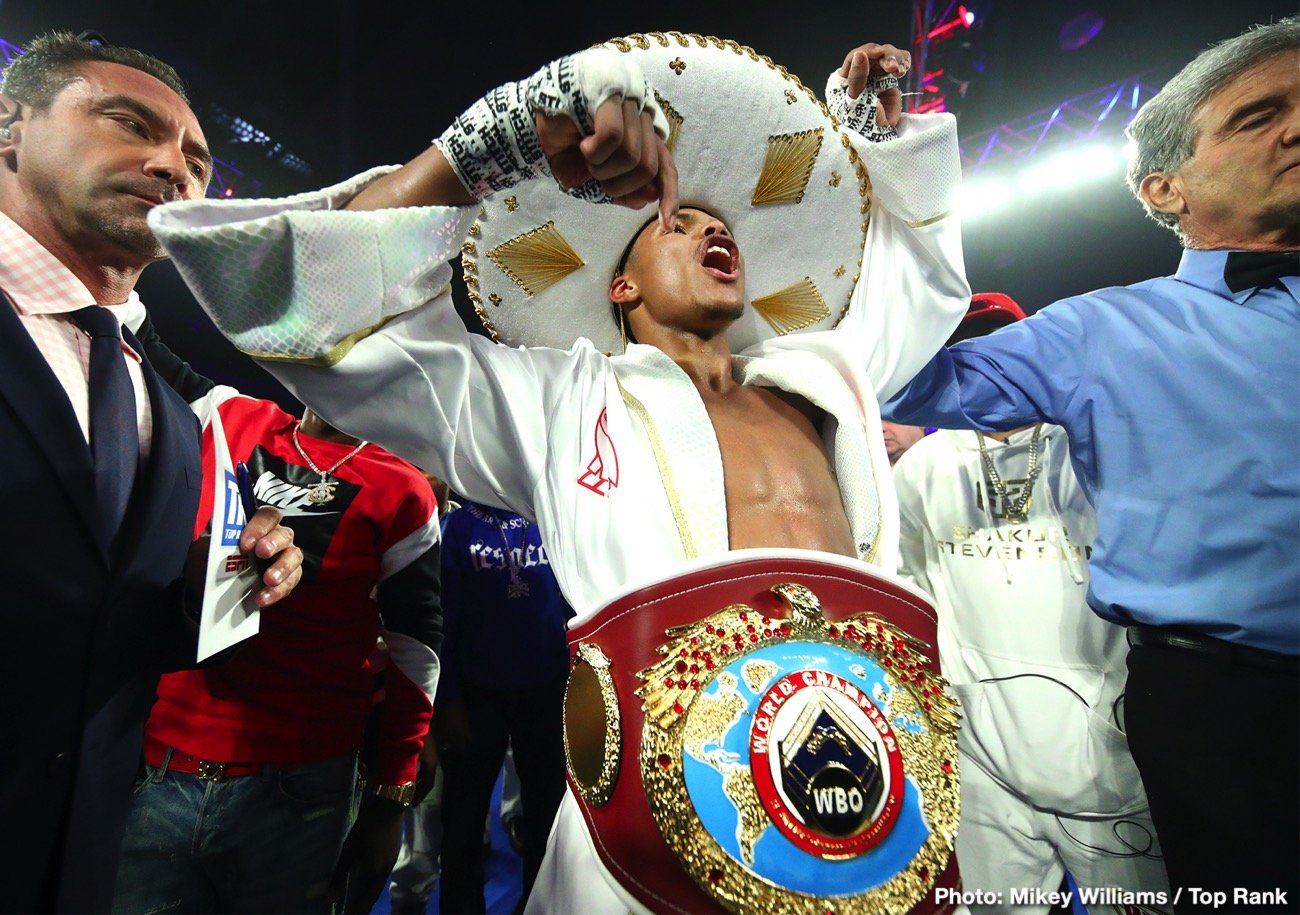 “I definitely see myself as my own man,” said Stevenson when asked about his thoughts on his promoter Bob Arum calling him the next Floyd Mayweather. “It’s a compliment still because it’s Floyd Mayweather. I get what they’re saying.

“I watched my last fight and my fight before my last. And I see certain similarities where we got the game mastered of hit and not get hit. I see some similarities, but I’m my own person. I came up with my own style.

“I know for a fact that I’m going to be the king of boxing in the future,” said Shakur. “I’m 100 percent sure. You can come back and look at these interviews later on down the line. ‘He been telling everybody this, and he’s been saying this before.’ Everything I’ve been saying is coming true, and it’s going to keep coming true.

Shakur shouldn’t take his promoter Arum too seriously when he compares him with Floyd Mayweather Jr. because this is standard for him. Arum views Terence Crawford as being similar to boxing great Sugar Ray Leonard, and Vasiliy Lomachenko with Muhammad Ali. 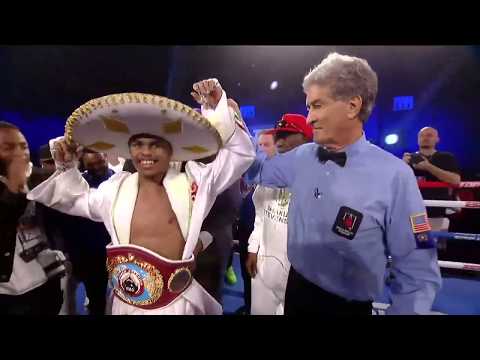