‘Larry Holmes would have toyed with Anthony Joshua’ – Lou DiBella 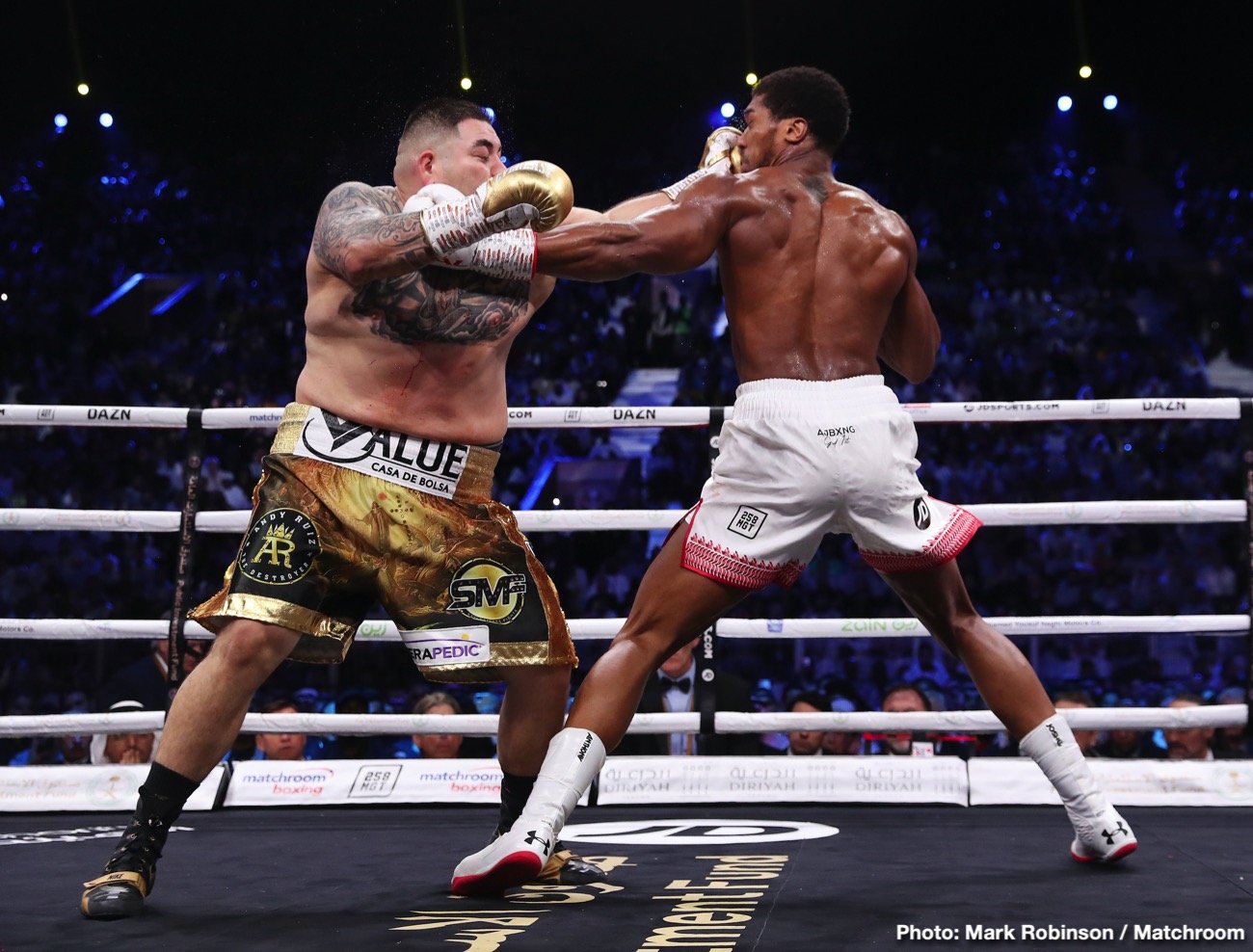 By Chris Williams: Former heavyweight champion Larry Holmes would have “toyed” with IBF/WBA/WBO champion Anthony Joshua if he were to fight in this era, according to promoter Lou DiBella. He feels that an original version of Holmes (69-9, 44 KOs) would have been too much for Joshua (23-1, 21 KOs).

The way Joshua was exposed by Andy Ruiz Jr. last year, it makes it difficult to pick him against ‘The Eastern Assasin’ Holmes. The skills of Holmes would have made it tough on Joshua, mainly if he stays on the outside and attempts to box him. Joshua would need to get in the trenches if he wanted to beat Holmes because he would likely lose if he tries to outbox him.

“Larry Holmes would have toyed with Anthony Joshua,” said Lou DiBella to Seconds Out. “I would have put my house on that fight. There’s no way in the world that AJ matches up stylistically well of all people with Larry Holmes. He was a tremendous defensive fighter, the chin of God, greatest jab in the history of the heavyweight division.

“I’m an AJ fan. I’m not anti-AJ. I think he’s a real top fighter, and I think he’s an excellent heavyweight. He’s certainly one of the three best out there now, okay? I don’t know how anybody that is aware of the history of boxing would believe that AJ could beat Larry Holmes,” said DiBella.

Holmes was on another level than Joshua during his prime years as a world champion from 1978 to 1985. During those years, Holmes beat the following well-known fighters:

It wasn’t until 1985 that Michael Spinks dethroned Holmes.

“We are going to return with no crowds,” said DiBella about boxing. “I also think there’s going to be an adjustment period. Did you see the comment from Bud Crawford where he said, ‘I have to be paid a lot more money if I’m fighting in front of nobody.’ That makes a lot of sense, doesn’t it? There’s less revenue, Bud, so we got to pay you more.

“We got to pay you more, Bud because there’s less money coming in. I’m going to charge you more money to fight because you can’t make as much money. You see, fighters are going to have to adjust to this new universe the way the rest of us are.

“And the fighters that are going to get into the ring first, and are going to be paid first, are the ones that best understand what’s going on in the universe right now,” said DiBella.

From what Terence Crawford is saying, he’s not going to fight without fans unless he’s paid extra. If Crawford stays with that attitude, then he could miss out on a lot of fights in 2020 or 2021. If boxing returns without crowds in 2021, Crawford could lose out on a lot of matches.

It’ll be interesting to see if Crawford changes his stance on wanting more money to fight without crowds. Crawford may have made enough money to sit inactive for a long time. But if the global pandemic lasts two to three years, Crawford’s career could go down the tubes.

Inflexible fighters will be inactive

“The fighters that are prepared to fight and understand that they’re going to have to work within the constraints of what we’re facing in the sport right now, those fighters are going to be more active and are going to get the opportunities, said DiBella.

“The fighters that say, ‘My contract says ‘I make 3-4 million dollars are not willing to adjust given the impediments that exist right now in generating revenue for an event, those fighters are going to sit longer,” said DiBella.

There will obviously be some fighters that will refuse to fight in front of empty arenas because they’ll be missing out on a lot of money. Guys like Anthony Joshua and Tyson Fury, who bring in massive wealth from the gate, won’t give up that money.

An adjustment period will be taking place

“I think there was going to be an adjustment in boxing anyway with this period of crazy spending with streaming, particularly in the United States with these three competing media entities with PBC, DAZN USA, and ESPN and crazy money have been spent,” said DiBella. “Crazy money was being spent, but it wasn’t like the results were better than they’d ever been.

“It wasn’t like the fights have been better than they’ve ever been. So it was like towards a natural period of adjustment. Now the pandemic has created a necessity for a worldwide period of change in every industry, in every sport and in every walk of life.

“So we’re in a period of change, and it’s going to be interesting to see how we adapt to it. But what I’m doing with my fighters is I’m urging them to stay in physical shape and cardiovascular shape, and be in a position when things normalize, they’re prepared to fight in four weeks or so,” said DiBella.

The adjustment period will start immediately once boxing returns. Some of these fighters that have been accustomed to making millions to fight mismatches against inferior opposition will likely see their pay reduced.

To make the kind of money they were getting before, these fighters will need to take on talented opposition that the fans are interested in seeing. So if you’ve got a world champion that is accustomed to milking his title against the bottom of the barrel fringe contenders, they’ll need to start taking on dangerous contenders if they want to continue to make good money.

“If an opportunity presents itself, they can take it. I’m also going to honestly advise my fighters,” said DiBella. “If you’re offered a fight, you don’t have the benefit of sitting there and hand-picking your opponents in the new world.

“There are way more people who need to work in every walk of life, and way fighters that need to work in boxing than ever before. So it’s going to be using sound judgment and a realistic view of what’s going on in the world around us to make the decisions with respect to your careers.

“So I’m going to be encouraging my fighters to understand this new world we’re all in. I want it to end as soon as it possibly can,” said DiBella on the pandemic.

It’s going to be a difficult transition for the fighters that have been accustomed to hand-picking their opposition. If they can’t do that anymore, we could see a lot of different guys exposed. Ultimately, that’ll be a good thing for boxing fans because there will be fewer paper champions, and we’ll have more entertaining to watch instead of the usual mismatches that have become the norm with the top fighters.

Andy Ruiz Jr. could be training alongside Canelo soon »