Keith Thurman wants a ‘RESPECTFUL fight’ to get a paycheck 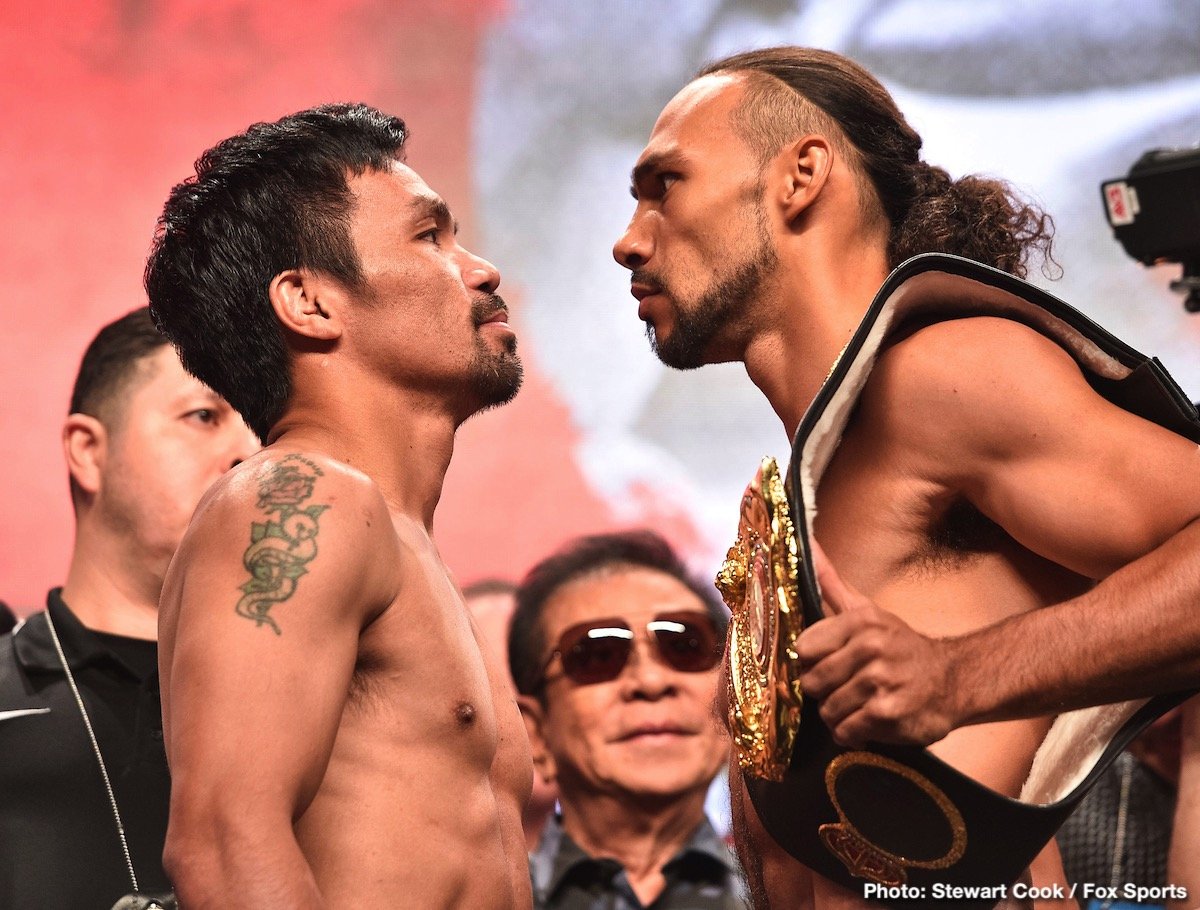 By Sean Jones: Keith ‘One Time’ Thurman says he’s not asking for a lot this year in terms of an important fight because of the current world situation. The former WBA/WBC welterweight champion Thurman (29-1, 22 KOs) says he just wants a “respectful” fight and an opportunity to get a “paycheck.”

It’s understandable why the 31-year-old Thurman wishes to get a fight in 2020, seeing that he’s only fought twice since 2017. Thurman’s chronic injury problems have led to him missing out on a lot of action, resulting in him losing his #1 perch in the 147-pound division.

Thurman does have these good options for 2020

Whether Thurman can one of those guys to agree to face him will be up to his adviser Al Haymon, and the ongoing pandemic.

If Thurman has his way, he would like to fight a grudge-match against Manny Pacquiao so that he can avenge his loss to him from July 2019. Pacquiao (62-7-2, 39 KOs) beat Thurman by a close 12 round split decision, although many boxing fans feel that Thurman did enough to deserve the victory.

Pacquiao, 41, hasn’t mentioned Thurman’s name in talking about options for his next fight, so it’s realistic to think that he’ll get a second shot. When Pacquiao was promoted by Top Rank, he used to fight repeated rematches against fighters like Tim Bradley, Juan Manuel Marquez, Erik Morales, and Marco Antonio Barrera. Now that Pacquiao is no longer with Top Rank, he doesn’t fight rematches.

“Who I want next is Manny Pacquiao because I want my belt back because I’m addicted to the game,” said Thurman on social media. “I don’t know how exciting that night was for you, but it was exciting for a lot of people that were there and for myself.

“Sharing the ring with a legend again is what I live for. When I did it with Danny Garcia, we were undefeated welterweight champions of the world. The way that fans came out and how electric the arena was, I just loved that.

“Really, it’s going to be hard for me to get what I want because what I want is everybody in the stands, you know? This is not a year to talk about what you want.

“This is not a year where boxing makes sure that Canelo and GGG’s rematch happens right away. This year, every single network, it doesn’t matter, to back in the day, HBO and ESPN, PBC, and everybody in this industry is in this business to put on shows and make money,” said Thurman. 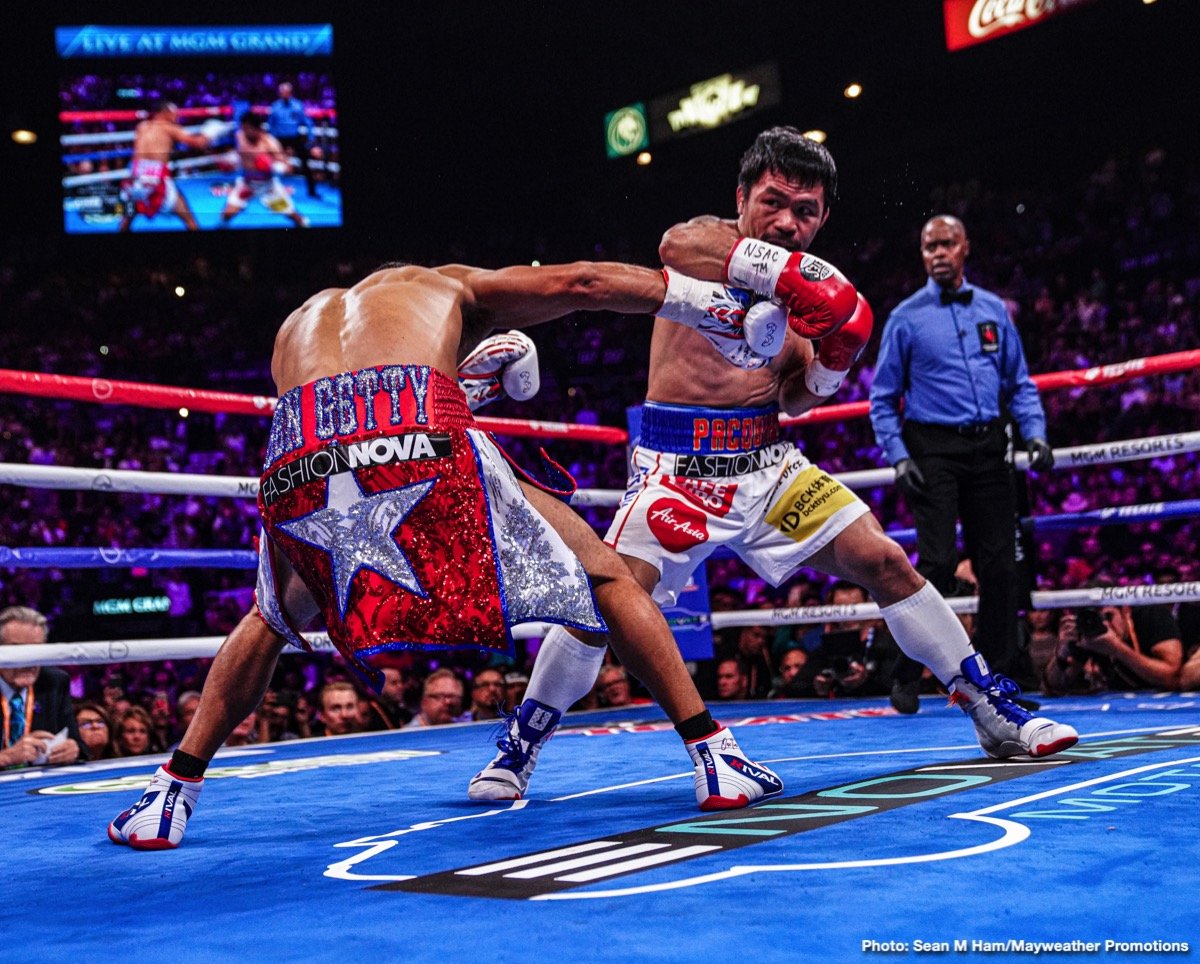 Keith wants to get a paycheck

“So what kind of match-up can you put on to give people entertainment, and to what degree and to what level?” said Thurman. “They’re not just going to lose money to satisfy the fans.

“Networks aren’t going to start losing money. I heard that every sporting industry wants something badly out there. It’s hard for these team sports.

“I’ll just take a respectful fight,” said Thurman for his next match. “Put me in the ring, let me get a paycheck, and let me stay active. You all know how easy it is for your boy to not fight and to try and come back and take over the world,” said Thurman.

If just getting a paycheck is Thurman’s main priority, then he needs to go for a lower level contender at 147. There are plenty of options available for Thurman if his main goal is to make a little money.

If it’s just a paycheck that Thurman is after, then he can find someone to face behind closed doors. Thurman’s management at Premier Boxing Champions will need to set that up. There hasn’t been any talk from PBC on whether they’ll be staging fights behind closed doors or not.

With Thurman not holding any world titles, he’s free to face almost anyone for his next fight.

“I saw the crisis I was in, and I was very fearful about my hand surgery. As a fighter, even though they say it was a minor surgery, you’re messing with my moneymaker. It’s just a lot of insecurities.

“With that, I didn’t want to postpone, and I didn’t want to wait for my career. I wanted to try and make it all happen. We were right there, going toe-to-toe with a legend,” said Thurman remembering his fight with Pacquiao.

It might not have mattered if Thurman had taken another tune-up before facing Pacquiao. Thurman was knocked down in round one because he mentally lost concentration. When you’re fighting Pacquiao, you need to be dialed in mentally at all times, especially in round one.

In round 10, Pacquiao hurt Thurman with a body shot. That’s something that would have happened no matter how many tune-ups fights Thurman took before facing Pacquiao.

Having an extra tune-up would have potentially helped Thurman fight harder during portions of the contest, as he was getting worked over by Manny during some of the early rounds.