By Allan Fox: In looking back on last July’s contest between WBA Super World welterweight champion Keith ‘One Time’ Thurman and Manny Pacquiao, this is a fight that came down to a flash knockdown that the Filpino star scored in round one.

Thurman recently revealed that he’d lost a great deal of weight in training camp in preparing for the Pacquiao fight, and he wasn’t at his best.

Thurman made a mistake early

“It was definitely a Manny Pacquiao crowd. It felt really good seeing the fans and knowing the moment is now,” said Thurman to Inside PBC Boxing. “Everything that I went through with my injuries and my layoff, having my one fight with Jose Lopez in January, and here we are on that beautiful night on the big stage with Manny Pacquiao. You see my energy. I’m pumped up.

“It was the highlight of my career,” said Thurman about his match against Pacquiao. “This is the biggest stage I’ve performed under, and I was really looking forward to putting on a show for all the fans, and I’m stepping in the ring facing Manny Pacquiao. I call that moment the final staredown.

“You do so many promos here you’ve got to do staredowns, and you do press conferences where you do staredowns. Right here is the final staredown,” Thurman says about him meeting Pacquiao in center ring for their fight last July.

The early start by the 40-year-old Pacquiao caught Thurman off guard, as he wasn’t expecting Pacquiao to be so youthful and energetic coming out of the blocks. In hindsight, Thurman should have been on his bike more in the first six rounds because he was getting lit up by Pacquiao.

With all the weight that Thurman had taken off in training camp, he didn’t have the wheels to move around like he had three years earlier. 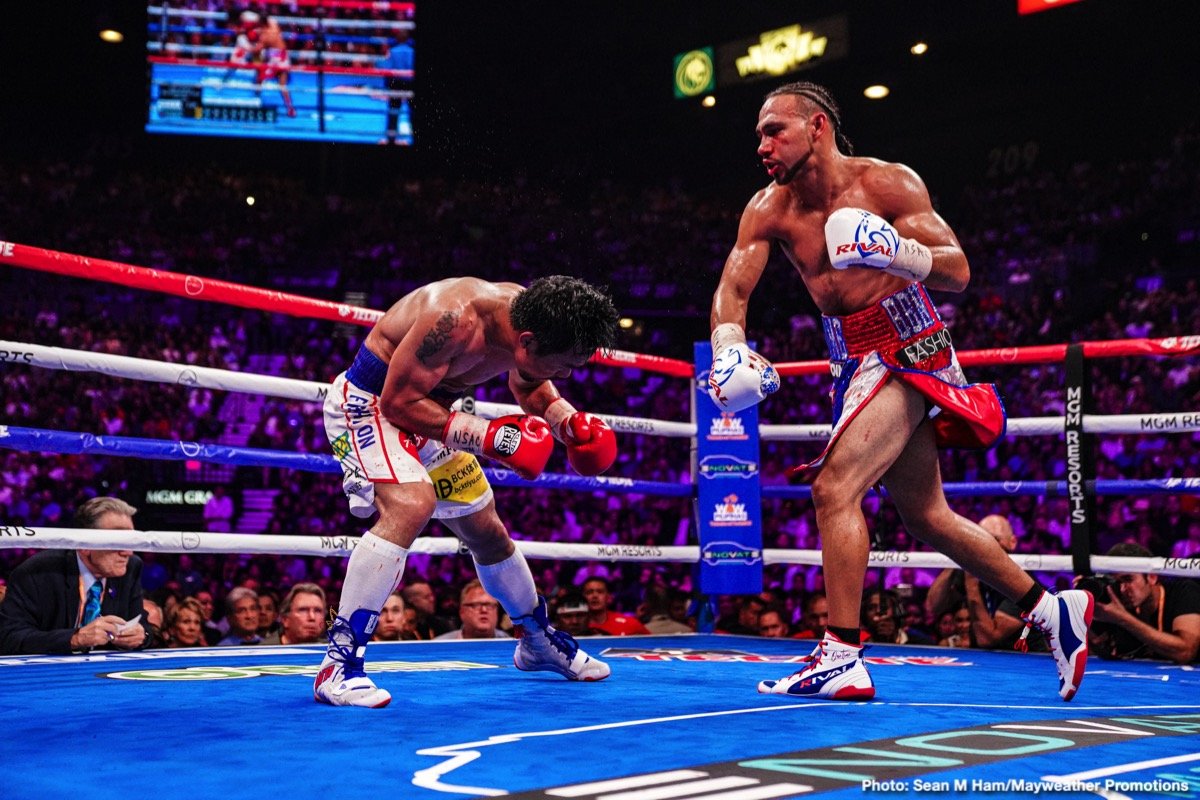 ‘One Time’ surprised by early knockdown

“I just wanted to take control at the start of the bell, and I felt like I did everything I wanted to do until I decided to take my first step back,” said Thurman. “He [Pacquiao] jumped right on me and created the first knockdown in the first round. I’m a little disappointed because I was being aggressive, and I thought, ‘I’m going to take a step back and relax for one moment.’

“I got up, I smiled about it, and I thought to myself, ‘Here we are. You wanted this, and you got it. It’s a fight, boy. Get up and let’s show Manny Pacquiao, it’s not going to be as easy as he thinks.’

“I just wanted to get up and try and recover from it. It’s just ironic. I didn’t see myself being in that situation, and for me, I was just laughing it off. But it was a mistake. Moving straight backward, boxers know, coaches know, moving straight back, it’s not good for your balance.

“You’re better off moving side to side. A lot of times, I circle the ring. I didn’t think he’d be able to hop on me. I was controlling the round, he didn’t do a lot of action, and he just threw the right punch at the right time,” said Thurman.

Backing up against Pacquiao is a no-no. You don’t do that against an experienced fighter like Pacquiao unless you’ve got a good chin. In Thurman’s case, Pacquiao hit him squarely when his feet weren’t under him.

“I was surprised by his poise, how much of a legendary champion he is, and how much he kept his hands up,” said Thurman of Pacquiao. “It also shows that he respected my power, and he realized that he needed to utilize his defense. You see right there, he was keeping his hands up, and I don’t think that’s a normal posture you see Pacquiao in a lot with his hands blocking like that.

“I caught him with that left hook, right hook, and he just endured. I know he felt the power. He gave my father respect after the fight and said, ‘Your boy can punch really hard.’ I felt like I needed at least one knockdown to come back into the fight, and he was able to stay up and take the punches and walked away with a split decision,” said Thurman about his loss to Pacquiao.

“In fights, it has to rank #3 or #4, definitely top 5,” said Thurman when asked where he ranks the shot that Pacquiao hit him with for the knockdown in round one.

Thurman landed a lot of good headshots on Pacquiao, but he took them, and he fired back with his hard punches. After six rounds, Thurman came on strong and rallied. What hurt Thurman’s momentum was Pacquiao tagging him with a body in the 10th round that knocked the air out of him.

Thurman took out his mouthpiece and was able to move and block shots while he was holding it. That was impressive.

“That shot right there [to the body] hurt. I needed to take a breath. It was more devastating than the knockdown in the first round when it comes to sensation,” said Thurman about the right-hand body shot that Pacquiao hurt him with in the 10th.  “With body shots, you feel nothing, or it hurts. There’s no middle line. ‘Oh, it kind of hurt.’ No.

“You either didn’t feel that body shot, and you can take it and keep moving, or it actually knocks the wind out of you. Quickly,” said Thurman about taking his mouthpiece out to catch his breath after being hurt by the body shot from Manny. “I did it so quickly. You got to slow it down. Even with the mouthpiece out, I parried his jab with mouthpiece in hand. I’m still focused, but I’m so focused that I wanted to take a breath.

“If I have the option to fight on, I’m always going to fight on like a true champion,” said Thurman.

After Pacquiao hurt Thurman with a body shot, he continued to nail him with body shots. Thurman did well to move while he was hurt. He took a lot of punches to the body until the round ended.

“All I heard was voices, a lot of cheering. It wasn’t easy to hear her or my family in that electric arena,” said Thurman when asked if he could hear his wife in the audience.

“I know my family is watching, but for me, I’m too focused in the ring. I just want to box hard, box smart. If I take a punch, I’m a fighter. I take the punch. Give me another punch. I’ll take that punch. It is boxing, and it was a real fight. And it was a fight of the year candidate, so I’m proud of that.

“It was a lot of fun. There’s a part of me that actually didn’t want the fight to end. At the end of the 12th round, I was like, ‘Where’s 13?’ Obviously, a 15 round fight like they did back in the days would give me more time because two judges gave it to Pacquiao, and one judge had me winning,” said Thurman.

If the fight had gone past 12, it’s debatable who would have won. Although fought a lot better in the second half of the fight, there’s no telling if he’d continued his momentum in a 15 round fight. Again, with all the weight that Thurman had taken on in training camp, he probably wouldn’t have done well in a 15 round fight with Pacquiao. 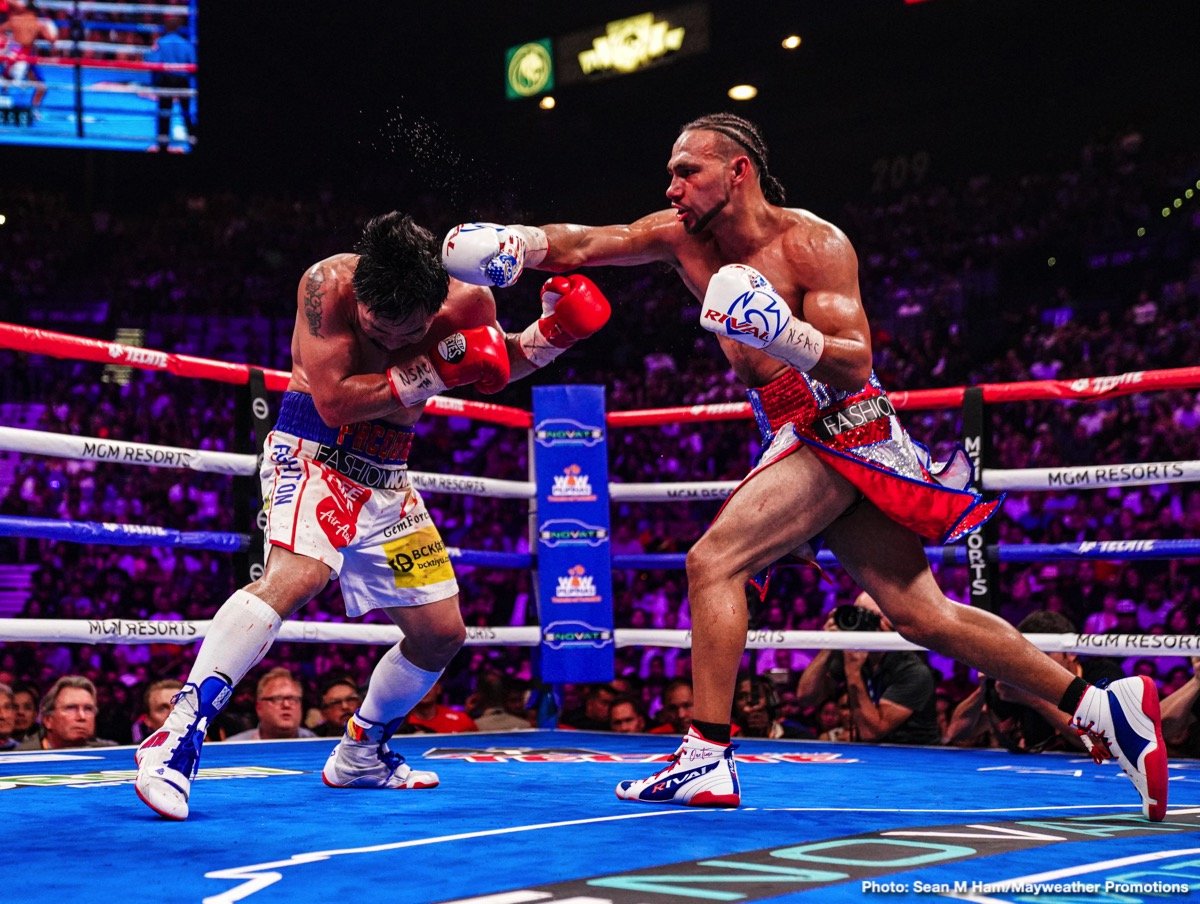 The early knockdown was the difference

“That third judge, as we were waiting, when we heard that there was a decision and not a draw. They’re going to take my belt,” said Thurman when asked what he thought when he heard it was a split decision. “I was pushing to not lose. Of course, I want to win, but I knew the momentum was not in my favor.

“So to force a draw is victorious enough. It was an exciting fight. But the judge had Pacquiao winning by one point out of 12 rounds. So if it’s a one-point decision, that’s like losing in a footrace by one foot.

“One point means that it was the knockdown that was the final say so in the match, and I accepted that. That’s why I was humble at the end of the fight. I fought a champion, I fought to the best of my ability, and we performed,” said Thurman.

‘One Time’ Thurman clearly believes the knockdown was the difference, and he’s right. The 10th round didn’t help Thurman either.


« Hearn not ruling out Joshua vs. Fury fight happening next