Hearn: Joshua vs. Pulev possible for July or August

By Charles Brun: As expected, Anthony Joshua won’t be defending against his IBF mandatory Kubrat Pulev on June 20. The fight is off for the time being. This is a result of the issues the world is confronting right now the sickness.  Joshua’s promoter Eddie Hearn says they’re looking at rescheduling the fight in July or August this year.

IBF/WBA/WBO heavyweight champion Joshua (23-1, 21 K.O.s) and Pulev (28-1, 14 K.O.s) were supposed to be fighting on June 20 at the Tottenham Hotspur Stadium in London, England, but a new date will need to be figured out. The fight could still take place at the same location.

When will it be safe to reschedule Joshua vs. Pulev?

The magic question is, how far into the future will the promoters for A.J. and the 38-year-old Pulev reschedule the event? Joshua’s promoters at Matchroom Boxing and Pulev’s management at Top Rank are both working on finding a new date.

You can argue that it would a complete waste of time for the Joshua vs. Pulev fight to be postponed until July, seeing that things might not be significantly improved by then. The vaccine for the sickness is said to be 12 to 18 months away, which means that Matchroom and Top Rank should consider taking the Joshua-Pulev fight behind closed doors.

It would be better for the two promotional companies to devote their energy into taking the fight behind closed doors now rather than waiting 3 to 4 months and having to deal with it then. If things continue as they are now, Joshua will not be fighting in 2020. You can’t even say that they’ll fight next year unless it’s behind closed doors. 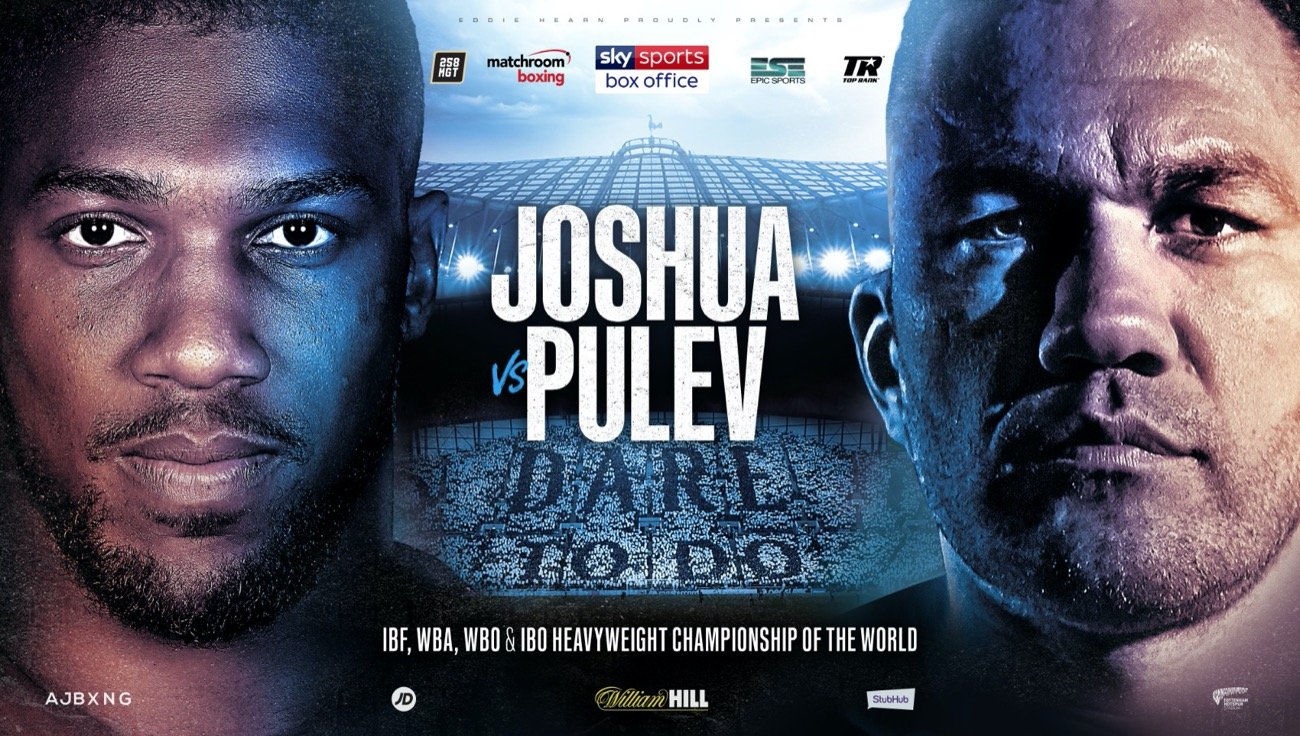 Now is not a good time for Pay-per-view events

With so many people out of work in the U.K., it’ll be difficult for boxing fans to sacrifice what money they have to purchase the fight between Joshua and Pulev in 2020. It’s not a good idea for the promoters to ask British boxing fans to pay to see the Joshua-Pulev fight this year. For the U.S. fans, they can watch that fight on DAZN for the monthly subscription without needing to pay extra.

Matchroom and Top Rank aren’t going to televise the Joshua fight on regular television, but they need to realize the numbers won’t be the same as they would have.

Charging boxing fans less to see the Joshua-Pulev fight would be a nice gesture, but that’s not likely to happen. With the economy bad, it could come down to the battle only being seen by those who have the means to purchase it. Will that be enough for the fight to be successful?

The promoters for Joshua and Pulev might need to think about taking the fight to a different country that will offer a considerable site fee like Saudi Arabia. The boxing fan for the two fighters will find it challenging to make the long journey to that country, but last least, the contest will bring in more revenue.

“We hoped 2 or 3 weeks ago that we would still fight in June, but I still think there’s an outside chance of some kind of boxing in June,” said Matchroom promoter Eddie Hearn to IFL TV. “With the size of the [Joshua vs. Pulev] show, there are too many unknowns right now. I think it’s safer that we postpone the date. We are looking at alternative times at the end of July. One of the data is on July 25. We’ll be working on that.

“We’re not giving a date yet because we don’t want to have to postpone it two times or three times,” Hearn said on the Joshua and Pulev fight. “So we want to give it a couple of weeks. We still have loads of time, but we’re working with the Spurs to make sure it’s rescheduled, and a date is provided that is safe for everybody and one that is realistic as well.

“I don’t think he is devastated by the news,” said Hearn about Joshua’s reaction to the postponement of his title defense against Pulev. “He was ready to go, but a couple more weeks won’t hurt his build-up and schedule. The main thing for us is to try and box twice this year, and that’s still very much the goal. We hope to get this fight in by the end of July or early August and then box in November or December. I don’t think anything changes,” said Hearn.

It’s highly improbable that Joshua will be fighting in July or August against Pulev unless they take the fight behind closed doors. Hearn is optimistic as always, but the reality is that the Pulev fight could be pushed to the end of the year or into 2021.

“Everyone is so bored right now,” said Hearn. “Everyone is hustling the news, aren’t they? ‘Well, do you think this could mean that Wilder will step aside, and Pulev can do this?’ The answer is anything is possible, but we have a contract to fight Kubrat Pulev, and Fury has a commitment to fight Deontay Wilder. If there were a way that anything could change, then maybe we’d look at the Fury fight if we don’t end up fighting in July or August.

“Let’s say that live sport doesn’t come back until September, October or November and Joshua fights only once this year. There is a good chance that if things were discussed and everybody was on the same page, then maybe we do go into a Fury fight, but that’s just pie in the sky at the moment. We know what the plan is, and that’s to make the mandatory defense against Kubrat Pulev in the late summer.

“We still have dates in August that we can run with,” Hearn said for the Joshua vs. Pulev backup plan. “At the end of August is kind of the cutoff in terms of boxing twice this year, you know?”

August would be a reasonably safe time to schedule the Pulev fight, as things may have cleared up by that point.

Khan still wants to fight a couple of more times »