Andy Ruiz Jr.: Why did he come in heavy for Joshua rematch? 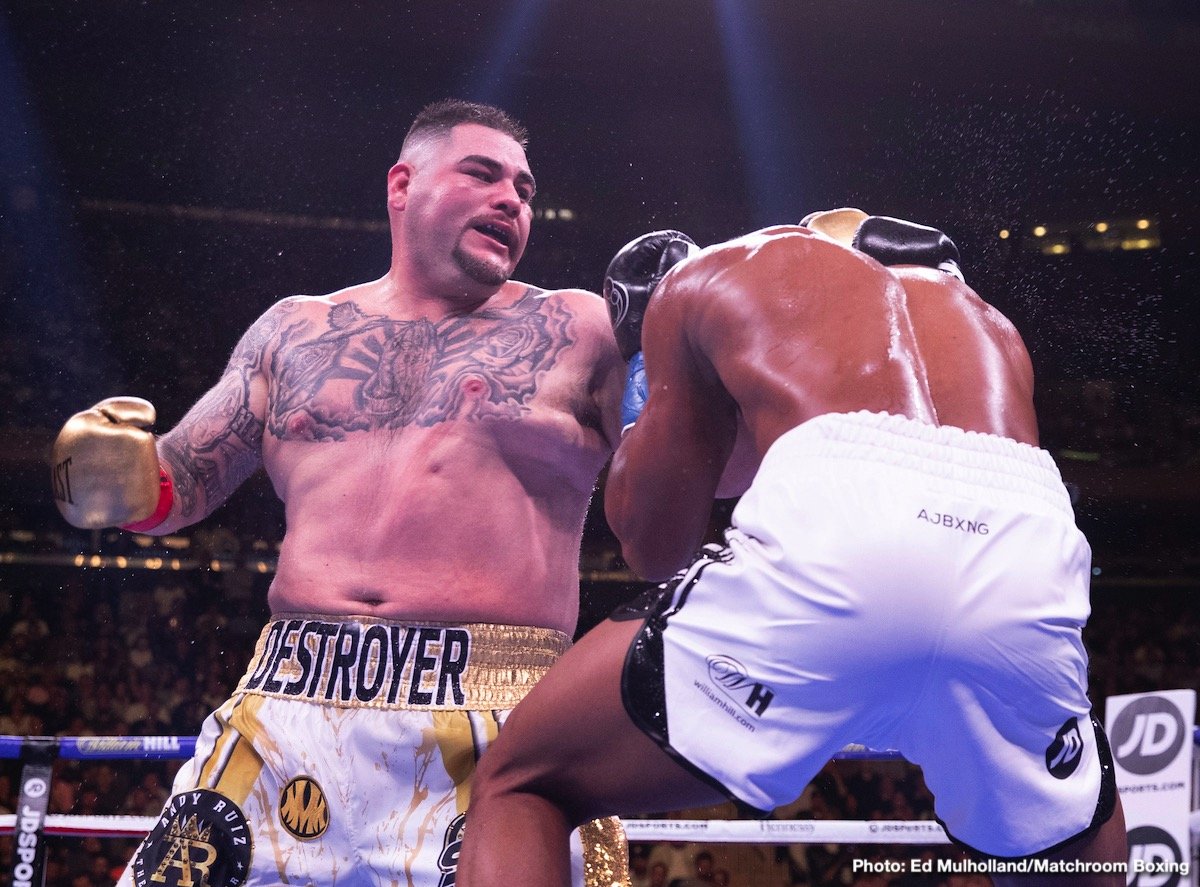 By Sean Jones: Andy Ruiz Jr. may have had a psychological reason for coming in grossly overweight for his rematch with Anthony Joshua on December 7, according to well-known trainer Teddy Atlas. Whatever chance that Ruiz Jr. had of beating Joshua in their rematch, it went out the window with him weighing 283 lbs.

He suspects that former IBF/WBA/WBO heavyweight champion Ruiz Jr. (33-2, 22 KOs) may have come in heavy on purpose so that it would have an excuse in case he lost the fight.

So instead of Ruiz being dumped on by fans for coming in at his best and losing to Joshua, he has fans believing that he would have won ‘If only.’

Teddy did a lot of research on Ruiz’s past fights

Atlas watched some of Ruiz’s previous battles, and he took tedious notes on areas that he needs to improve on.

During Atlas’ research on Ruiz, he discovered that this wasn’t the first time that he’d come into one of his fights heavy. He’d done it before. Atlas suspects that Ruiz’s rationale for coming in out of shape for some of his contests isn’t only because he likes food.

He thinks there’s a psychological reason for Ruiz coming into some of his fights fat. By Ruiz not training hard and watching his diet, it gives him cover because it allows him to convince himself and others that he would have won if he’d been in shape. Ruiz is setting himself up to fail by being a slacker at times.

Teddy had hoped to meet with Ruiz Jr. in New York to discuss taking over as his new trainer. However, Ruiz never called him. He’s not sure if Ruiz had second thoughts or if he still plans on contacting him later.

Ruiz Jr. came in overweight for a reason

“If you depend on your body to make a living as fighters do, and if you come in at a weight that compromises your chances of doing that, then there’s something wrong,” said Atlas in analyzing Andy Ruiz at THE FIGHT with Teddy Atlas. “Yeah, it’s a lack of discipline, and maybe it’s an addiction to food.

“Okay, we can blame it on a lack of discipline, but there has to be a psychological component to it too where you’re under a lot of pressure. Getting into that ring is a tough thing, and maybe you’re setting up an excuse where you’re not even aware of it in a subconscious way. 75% of boxing and being successful is mental.

Ruiz coming in overweight at 283 lbs did give him and supporters an excuse for why he lost the fight to Joshua.

What was Ruiz’s motives for coming in heavy?

What I’m saying is He didn’t ever give himself an excuse to lose. All I’m saying is that when you’re in these waters that I’m talking about, it gets deep, it gets tough, and it gets murky. You have to understand it, and you have to explore it. You have to be aware of it; otherwise, you’re never going to get better.

“So to me, Ruiz coming in the way he did at the most critical part [his rematch with Anthony Joshua], yeah, because he made money. I get it. Yeah, he wanted to eat and had a lack of discipline. He was heavy before that too.

“There’s more to it. You got to find out what it is,” Atlas said about Ruiz’s possible motives for coming in heavy. “There’s more to it. That’s what I’m talking about, and that’s why I’m not quick to ‘yes’ to a fighter because there is a lot involved. I want to see if I’m going to have cooperation with what I believe, and going down that road,” said Altas.

Atlas suspects that Rui purposefully didn’t take his training seriously so that he would have an OUT in case he lost the fight. What better way to have an excuse than to come in looking fat at 283 lbs.

Unfortunately for Ruiz Jr., he doesn’t have enough enablers in the boxing world that believe that he would have won if he’d been in shape.

“It’s tough. You’re naked out there, and you’re vulnerable out there. But now all you have to do, ‘If he [Ruiz] were in better shape, maybe he would have won.‘ ‘Oh, so maybe he’s better than the other guy. He just wasn’t in as good a shape, but if he were, he would have beat the guy.’

The fact is, Ruiz Jr. looks so bad against Joshua, that the fans overwhelmingly think he would have still lost no matter how well-prepared he came in for the rematch.

If Ruiz came into the fight out of shape on purpose, it’s disappointing. In that case, his fear of dealing with not being good enough was so intense that he intentionally didn’t try hard to win.