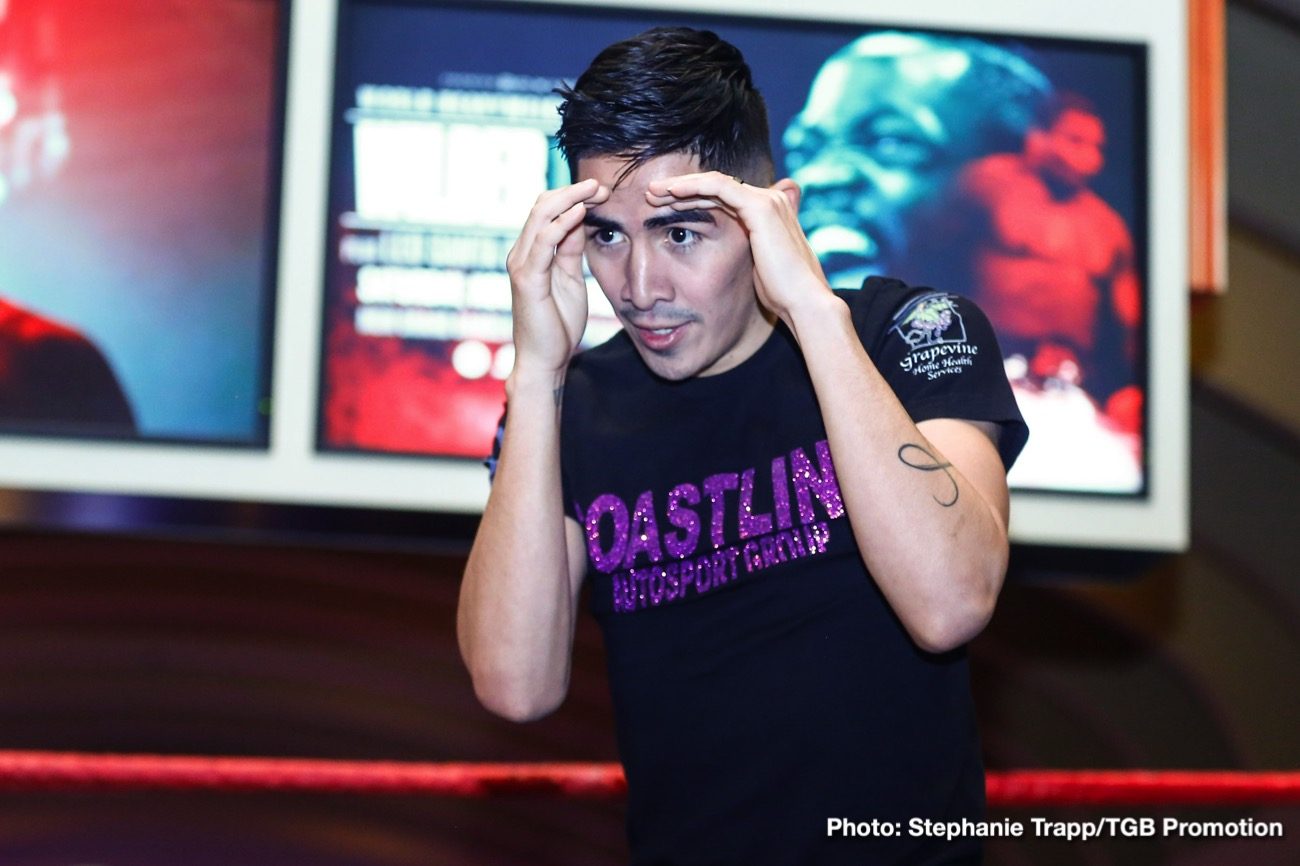 By Dan Ambrose: Leo Santa Cruz says they have an agreement in place for him to move up to lightweight to challenge WBA ‘regular’ 135-lb champion Gervonta ‘Tank’ Davis. The only thing Santa Cruz (37-1-1, 19 KOs) is waiting on right now is a date in the summer for the fight to take place.

Santa Cruz says that he wants to show the fans that he’s NOT afraid of Tank Davis (23-0, 22 KOs), and he’s not scared of WBC featherweight champion Gary Russell Jr.

A lot of people in the boxing world believe that Santa, 31, has been ducking both Tank Davis and Russell Jr. for the last few years, and he wants to prove them wrong by fighting both guys.

If Russell Jr. turns down the fight with Santa Cruz at 135, he could lose out on his only shot at fighting him. Russell Jr. isn’t going to do that, because he’s been chasing him for the last three years.

“The fight against Gervonta is for sure I think. They already agreed that we’re going to fight, but we need to decide on the date,” said Santa Cruz to Fighthype on the Davis fight being agreed on. “We don’t have a date. I think we’re probably going to have it in the summer. I don’t know the date yet. Things can change fast.

“We can know tomorrow or we can learn later on,” Santa Cruz said. “The ones that know are the promoters, and we’re going to wait for them to tell us. As I said, I’m always ready. I know it’s going to be a hard fight. I know a lot of people don’t believe I can beat him,” said Santa Cruz.

Dealing with the size of Tank Davis will a monstrous task for Santa Cruz. In Santa Cruz’s last fight, he moved up to super featherweight and defeated Miguel Flores by a 12 round decision last November. Santa Cruz didn’t look strong at the weight, and now he’s moving up to lightweight to take on Davis.

The hardest part about Santa Cruz’s fight against Tank Davis could be the weight difference. Davis is barely making the 135-lb limit already after just one fight in the division, and he’s very likely to be weighing in the 150s on the night of the fight. Santa Cruz is an excellent fighter, but it’s going to be asking a lot of him to beat a de facto junior middleweight.

Well, it’s obvious that Santa Cruz is a lot smaller than Tank Davis, and that’s not something that’s debatable. The fact is, Tank Davis is bigger and stronger than Santa Cruz, but that doesn’t mean he’s a better fighter. Santa Cruz has the engine to beat Davis, as long as he can take his huge shots at close range.

For a lot of boxing fans, that’s what they question about Santa Cruz. They know his stamina is superior to Gervonta, and they agree that he could outwork him over 12. But what we don’t know is if Santa Cruz can take the big shots from Davis for 36 minutes without getting knocked out.

Even if Santa Cruz can handle Tank’s power, he may sustain too much facial damage, and wind up getting stopped on a cut, broken nose or jaw. It’s not as if Santa Cruz won’t be there to be hit by Davis. With Santa Cruz’s pressure style of fighting, he’s going to be an easy target for Tank’s power shots all night.

What plays in Santa Cruz’s favor is Tank Davis’ questionable stamina, which looked poor in his last fight against Yuriorkis Gamboa.

“I know Tank is a great fighter, and this is a dangerous fight. But I’m taking this fight to prove to the fans that I’m not scared of nobody. I think Tank Davis is a better fighter than Gary Russell. If people see me fight Tank Davis, they’re going to know I’m not afraid of Gary Russell.

“I think Tank Davis is better than Gary Russell. He’s stronger and got more power, and that’s what we want. We’re going to take the risk and go out there and show people that we’re warriors and give them a great fight.

“Of course, yeah,” said Santa Cruz when asked if he wants to fight Russell Jr. after Tank Davis. “Those were the two names I said.  If I get the win against Tank Davis, then I’ll get Gary Russell. Hopefully, he loves up to 130.  I know he’s willing to go up to 130, and we’ll get him,” said Santa Cruz.


« Emanuel Navarrete to fight in July, possibly at 122