By Allan Fox: Floyd Mayweather Jr. is in the UK this week for a tour try and attract interest from boxing fans in his potential comeback in 2020. Mayweather Jr. has fought in 3 years, and he’s hoping to earn $350 million this year.

Speaking in front of an audience that paid to see him talk in Essex, Mayweather pointed out that the $300 million that he made for his last fight against Conor McGregor in 2017 wasn’t enough. He wants $350M for possibly 2 fights, which could be against MMA fighters Khabib Nurmagomedov and MacGregor.

In Mayweather’s last fight against an MMA guy, he stopped 20-year-old kickboxer Tenshin Nasukawa in the 1st round in an exhibition match on December 31, 2018. It was a disappointing affair due to the look of competitiveness.

It would be a surprise if Mayweather can make over $300 million in 2020, as he’s been inactive. You would think that fans would prefer to see active boxers fighting MMA guys rather than someone who hasn’t fought in three years. The last entertaining fight that Mayweather was involved in was his 2014 rematch with Marcos Maidana. That was competitive and fun to watch. All of Mayweather’s fights since then have been dull and lacking entertainment value.

It’s smart for Mayweather to be looking to face McGregor and Nurmagomedov on the same night because he’s likely to burn his bridges entirely with his next mismatch. Once fans see Mayweather beat up on McGregor or Nurmagomedov, they won’t want to pay to see him the fight again. That’s why it’s a good idea for Mayweather to package them together.

Boxing fans probably won’t because it’s not interesting to watch the 43-year-old Mayweather beat up on MMA fighters with no skills for the sport. Fans want to see Mayweather take on opposition that has a chance of beating him, and there’s no way that any of the MMA guys could compete with Mayweather. It doesn’t matter if Mayweather is roughly only 30% of what he once was, that’s more than enough to beat the likes of McGregor and Nurmagomedov.

Mayweather’s last professional fight against MacGregor brought in 4.3 million pay-per-view buys on August 26, 2017. MMA fans purchased the fight thinking it would be a competitive one, but it wasn’t. It resembled a glorified sparring session with Mayweather appearing to take it easy on McGregor, who was making a debut in boxing. The much-criticized Nevada State Athletic Commission sanctioned the Mayweather-McGregor.

Floyd’s inactivity may hurt his career

Mayweather has arguably hurt his own career and potentially crippled it beyond the point of no return by making the following BIG mistakes:

Mayweather is said to want to take on McGregor and Nurmagomedov on the same night in a 2 for 1 type deal, and that sounds ridiculous. Trying to promote a fight like that would be hard to do because the promoters of the event would basically be tipping off the MMA and boxing public that it’s a mismatch.

Fans admire McGregor and Nurmagomedov for their talent in the UFC, but you have them both taking on Mayweather in back to back fights on the same night, it’s an insult to them. It devalues both of them and gives the impression that the 43-year-old Mayweather is better than he actually is at this point in his career.

Mayweather has shutdown his boxing career

The former six-division world champion Mayweather would likely lose to better than half of the top welterweights now, as well as a number of 140-lb and 154-lb fighters. He’s not the same guy he once was, and that’s why it looks bad for Mayweather to be hustling fights against guys with no background in boxing.

If Mayweather had the sense to keep fighting against boxers, his fights against MMA guys might continue to make him big money for a number of years, but he doesn’t want to do that. He’s completely shut down his boxing career, and that makes a lot of fans view Mayweather as an opportunist. His fights against MMA guys aren’t fair, and they’re entertaining aside from the build-up. 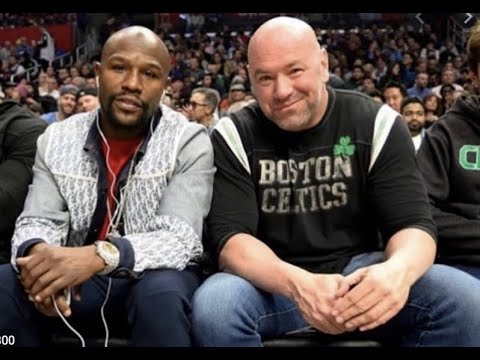