By Allan Fox: Paulie Malignaggi isn’t giving former WBC heavyweight champion Deontay ‘The Bronze Bomber’ Wilder much of a shot at avenging his recent loss to Tyson Fury when the two face each other in a trilogy contest in the future.

The former two-division world champion Malignaggi says Wilder (42-1-1, 41 KOs) would have a better shot at winning if he let Fury (30-0-1, 21 KOs) face IBF/WBA/WBO champion Anthony Joshua (23-1, 21 KOs) next while he fought someone else to gain back his self-confidence.

The idea is that not only would Wilder regain some of his shattered self-confidence by taking a soft opponent, but also Fury would potentially be depleted by the AJ fight.

Fury might also drop off the wagon with a victory over Joshua the same way he did after defeated Wladimir Klitschko in 2015. After that huge victory, Fury rewarded himself with food and drink and put on a gawdawful amount of weight.

“I admire the competitiveness of Deontay to get back in there,” said Malignaggi to Fighthype on Wilder choosing to fight Fury in an immediate rematch. “If you let Fury and Joshua duke it out first and give yourself an in-between fight to gain some confidence back and maybe work on some things that you might want to do against Fury, I don’t think that’s going to hurt either, but I don’t think that’s going to happen.

“Personally, I can’t see it unless Fury comes in totally unmotivated, and falls off the wagon again like he did after he beat [Wladimir] Klitschko,” said Malignaggi when asked if Wilder can beat Fury in their trilogy match. “I thought Deontay was the #2 heavyweight in the world bar none. And I didn’t think Joshua could beat him.

“I think I still stick by that, but if he [Wilder] takes another beating like this in the Fury rematch, he’s going to fall off and lose confidence from his own mental standpoint, and maybe not be the same fighter. The heavyweight division is pretty competitive right now. You take another bad loss and that probably puts you out of the top two,” said Malignaggi.

It’s unlikely that Fury will be unmotivated for the third fight with Wilder. If anything, Fury will be ready to double down by putting even more pressure on Wilder and showing no respect for his power. Fury’s ego problems could be his undoing if he plows right into one of Wilder’s right hands during the first six rounds. 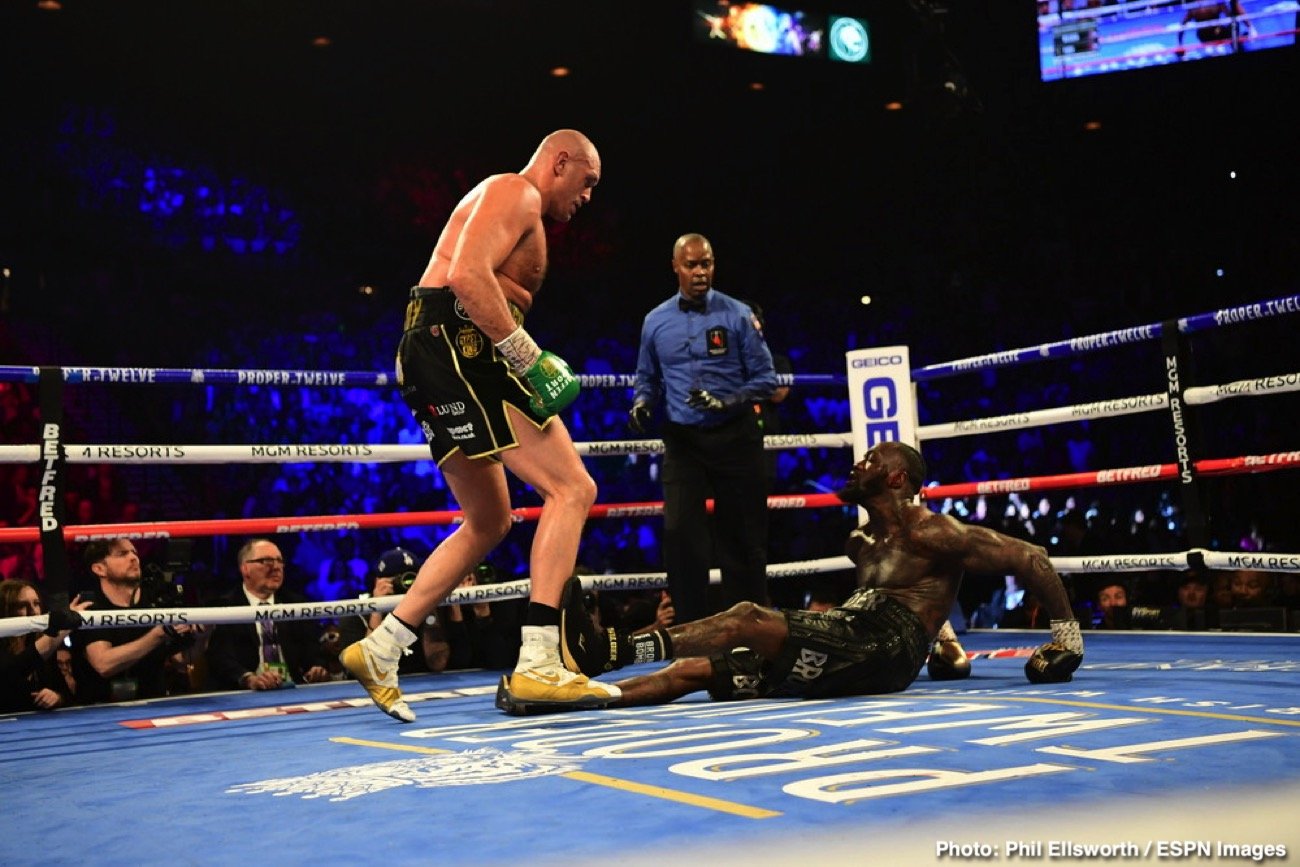 “I was surprised by Fury’s outlook and approach,” said Malignaggi in talking about his win over Wilder. “He did say he was going to be aggressive. I thought it was gamesmanship more than anything else. And I wasn’t surprised that he won the fight. I was surprised at the way he took the approach to win the fight and the fact that he was able to take that approach and still dominate the fight. That was what was more surprising to me.

“Fury basically took the fight out of Wilder. I don’t think Wilder thought he’d be in the position where a guy is not respecting your power, walking you down, and now you got to go to plan-B, which is to try and box and win rounds. I don’t know that he knows how to do that.

“So it was sort of eye-opening from the standpoint of a fan and a boxing fan such as myself. Whether you picked Wilder or Fury to win, I don’t think you could have predicted that it would play out the way that it did. Round 1 was sort of close, and I thought, I’m not sure he’s [Fury] doing the right thing here. I know some gave it to Wilder and some gave it to Fury,” said Malignaggi.

Fury and his trainer Sugar Hill Steward went old school in roughing Wilder up and turning the fight into an MMA type of fight. Wilder thought Fury was going to box him, and he wasn’t ready for the all-out roughhouse style of fighting.

Deontay was mentally fatigued by his hopelessness situation

“I thought Wilder won round 1,” continued Malignaggi on breaking down Wilder vs. Fury II. “So I was like, ‘I wonder what he’s getting at doing this?’ Then in round 2, he [Fury] started roughing him up, and then you started to see the psychological battle.

“When somebody is roughing you up like that from a psychological perspective, you start to break a little bit. As you break, you get frustrated and make more errors and make more mistakes. Then it started piling on Deontay. He was never able to get out of the rut, you know? You started gaining more and more confidence.

“You could see the things he was doing. Talking, the feints he was using, licking the blood off Deontay’s face or whatever. You could see the guy getting more and more confident,” Malignaggi said about Fury. “Deontay made himself tired from a mental perspective because when you feel hopeless in there, you feel like the fatigue gets a hold of you and you feel like you’re out of answers.

“Besides physical fatigue, I think he was mentally fatiguing too because he was out of answers. When everything is working, you feel like you have all the weight in the world.

There were a lot of things that went wrong for Wilder that hurt his chances of winning the fight. The weight that Wilder gained in bulking up didn’t help him, and he looked he wasn’t ready for Fury’s roughhouse tactics that he used. Wilder was trying to fight a conventional war.

“I don’t see any validity in that because Deontay kind of put his own foot in his mouth by saying he trains with his own jacket all the time,” said Malignaggi about Wilder’s excuse in complaining of his ring walk vest-wearing his legs out. And I have some doubts that it weighed 40 lbs. I don’t doubt that it weighed some, but I have doubts that it was a 40-lb suit.

That’s utterly kind of strange for any suit to weigh 40 lbs. You have to fight in shorts, and there’s no way the shorts weighed anything. You’re telling me that everything on his upper body weighed 40 lbs along with the mask, I find that hard to believe too. You don’t speak anything public without speaking to your team.

Even when he was making this complaint within his camp, somebody in his camp should have said, ‘Don’t go public with that. It won’t be a good look.’ If you have all yes-men, it’s kind of tough to get a real answer out of anybody. He’s got a big entourage.

You can’t tell me out of 25 guys somebody didn’t tell him. ‘it’s not a good look if you go public with that, champ. That s— was probably heavy, but next time we’ll know better and you’ll be better.’ Just something to spin it in a positive way of not letting him make a fool of himself by making that excuse public,” said Malignaggi in talking abut Wilder’s decision to blame his loss on his ring walk vest.

It obviously wasn’t the jacket that took the energy out of Wilder. He was fine until Fury began shelling him with shots to the back of the head.

Wilder was too tired to hurt Fury

“I do agree with the stoppage, but I can see it from Deontay’s perspective,” said Malignaggi. “If you’ve ever had a conversation with your team in the past where you said, ‘Never ever stop the fight no matter how bad it is.’ If I’ve had this conversation with you and you stop it, we’re going to have a problem.

“Do you know what I mean? So I do see it from Deontay’s perspective. I personally agree with the stoppage. But I also understand Deontay’s right if he’s had this conversation with his team in the past.

“I felt he [Wilder] was so fatigued and so beat up, that even if he landed a big shot, it wouldn’t have the same steam on it. We’ve seen tired fighters score knockouts, but that’s usually when the other fighter is tired as well. So when you land the big shot, the knockout comes. But Tyson Fury was way too fresh, and Deontay was way too tired.

“It was too much of a gap at that point. I don’t doubt that both guys were in good shape at the start of the fight, but the way the fight played out, there was a big difference in the conditioning. I think even if Wilder had landed a big shot, it wouldn’t have hurt Fury due to the fatigue factor. That’s why I felt the fight was better off to be stopped,” said Malignaggi.

Wilder looked a lot like Wladimir Klitschko after he was badly hurt by Lamon Brewster in their first fight in April 2004. In that fight, Brewster hurt Wladimir in the 5th round, which then caused the big Ukrainian fighter to suddenly grow tired.

“I thought MMA fans were the dumbest in sports, and I probably still do,” said Malignaggi. “Boxing fans are right there. They’re right on their heels of being the dumbest fans in the sport. If you’re a professional fighter and you’ve had on professional fight gloves and you’ve had your hands wrapped in gloves, you know even before it’s tied, there’s no maneuvering space.

“You cannot get your hand in an untied glove unless someone priest it on you. Once your hand is tied, it’s impossible to maneuver anything. It is beyond impossible. You’ve got the Commission watching you and a representative from the other team watching you.

Wilder will likely be more willing to fight dirty in the rematch knowing that Fury is probably going to be hitting him with rabbit punches at every opportunity.

If the fight is going to be played out with both guys trying to brain each other with shots to the back of the head, it could come down to which of the two big heavyweights lands first.

Wilder never seemed to recover from a textbook rabbit punch Fury hit him in round 2. From that point on, it was all downhill for Wilder. 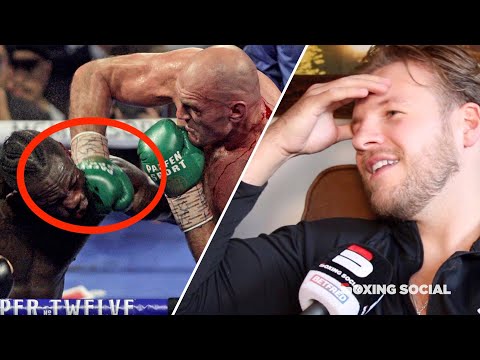 Froch on Golovkin: ‘I’d have SMASHED him to bits’ »