By Chris Williams: Kell Brook has thrown his hat into the ring to volunteer to face Terence Crawford in his next fight. Brook notes that Crawford doesn’t have a dance partner for his next title defense of his WBO welterweight belt, and he’s willing to face him.

Brook (39-2, 27 KOs) says he hasn’t been contacted by Crawford’s promoters at Top Rank. It’s been two months since Crawford (36-0, 27 KOs) last fought in stopping WBO mandatory Egidijus Kavaliauskas in the 9th round on December 14.

Is Brook too dangerous for Crawford?

Surely by now, Top Rank would have contacted Brook’s promoters at Matchroom Boxing to try and set up a fight between him and Crawford if they were interested in him as an opponent for ‘Bud.’ Crawford is likely to be back in the ring by May or June, so that doesn’t give Top Rank a lot of time to find someone.

Hopefully, the name that Top Rank chooses as Crawford’s next opponent is at least as good as Brook if not better. If it’s another Kavaliauskas level welterweight, fans will start to suspect that Top Rank spoon-feeding Crawford weaker opponents to make him look better than he is. They clearly need to step up the level of opposition they match Crawford with because he’s missing out.

If Brook hasn’t been contacted by now by Top Rank, it means that they’re going in a different direction for Crawford’s next fight. Just who that is anyone’s guess.

Brook is coming off of an impressive 7th round knockout win over junior middleweight contender Mark DeLuca (24-2, 13 KOs) on February 8 in Sheffield, UK. In the 7th, Brook knocked out DeLuca with a left to the head.

“He’s running out of dance partners and there’s one right here,” said Brook to Fighthype on him volunteering to face Crawford next. “Listen, I’m in a better mental and physical state than when I fought [Errol] Spence, yeah.

Brook is arguably far superior to anyone that Crawford has fought thus far during his 12-year professional career, and there’s no one else close. Crawford’s best opponents are Amir Khan, Yuriorkis Gamboa, Jeff Horn and Kavaliauskas.

For Crawford or his promoters at Top Rank Boxing Promotions to say ‘NO’ to a fight against Brook, it would give fans the impression he’s being ducked. Crawford’s promoter Bob Arum wants Manny Pacquiao or Errol Spence Jr. for him, but those fights aren’t going to happen right now.

Arum isn’t interested in Danny Garcia as an opponent for Crawford, and it’s unclear if he doesn’t want Keith Thurman as well. Shawn Porter was showing interest in fighting Crawford recently, but he didn’t take the fight. It’s believed that Crawford sees Porter as a friend, and doesn’t want to fight him.

“There’s an argument who’s #1 at welterweight, Crawford or Spence,” said Brook. “With the car crash, you have to put Crawford, because he’s more active and look at what he’s been doing. Listen, I put myself on this side of the pond [U.S]. I want them dancing partners. Pacquiao, Thurman, light middleweight [Jermell] Charlo, these kinds of names you got to mention along with my name,” said Brook.

You can’t say for sure that Crawford is the number one welterweight because he’s beaten anyone good at the weight. These are Crawford’s opponents at 147 since moving up to the weight class in 2018:

Crawford hasn’t fought good enough competition at 147 to say for sure that he deserves to be viewed as the number one guy. The fighters that Crawford has fought at 147 are guys that show that Crawford is worthy of being a top 15 contender, but #1. Unless we lower the bar at welterweight and call Khan, Horn, Benavidez Jr. and Kavaliauskas elite fighters, you can’t say that Crawford has proven himself as the best.

All we know is Crawford is better than the welterweight that he’ fought since moving up from 140 in 2018.

Brook wants Crawford and Spence fights before he retires

“I’ve been in with Spence, I’ve been in with Golovkin, and showed that I belong at that top table,” said Brook. “You can all get this. I know what happened in that training camp, and I was beating the man.

“I wasn’t even 50%. Imagine me at 100%. It would be a completely different story. I want to give the fans the fight they want. They want the Spence fight, and they want the Crawford fight. So before I hang them gloves up, I want them fights for the fans,” said Brook.

Kell has got a better chance of getting a rematch with Errol Spence Jr. than he does a fight against Crawford. If Brook can get some wins up his belt, Spence would throw him a bone. 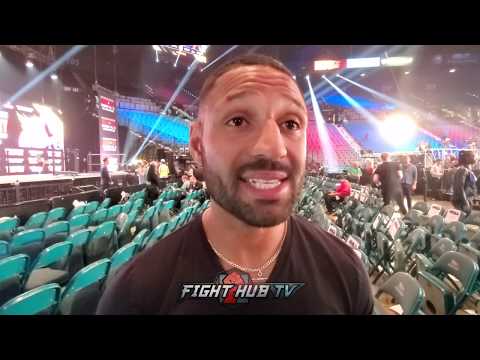 
« Jamel Herring defends against Carl Frampton on June 13 in Belfast