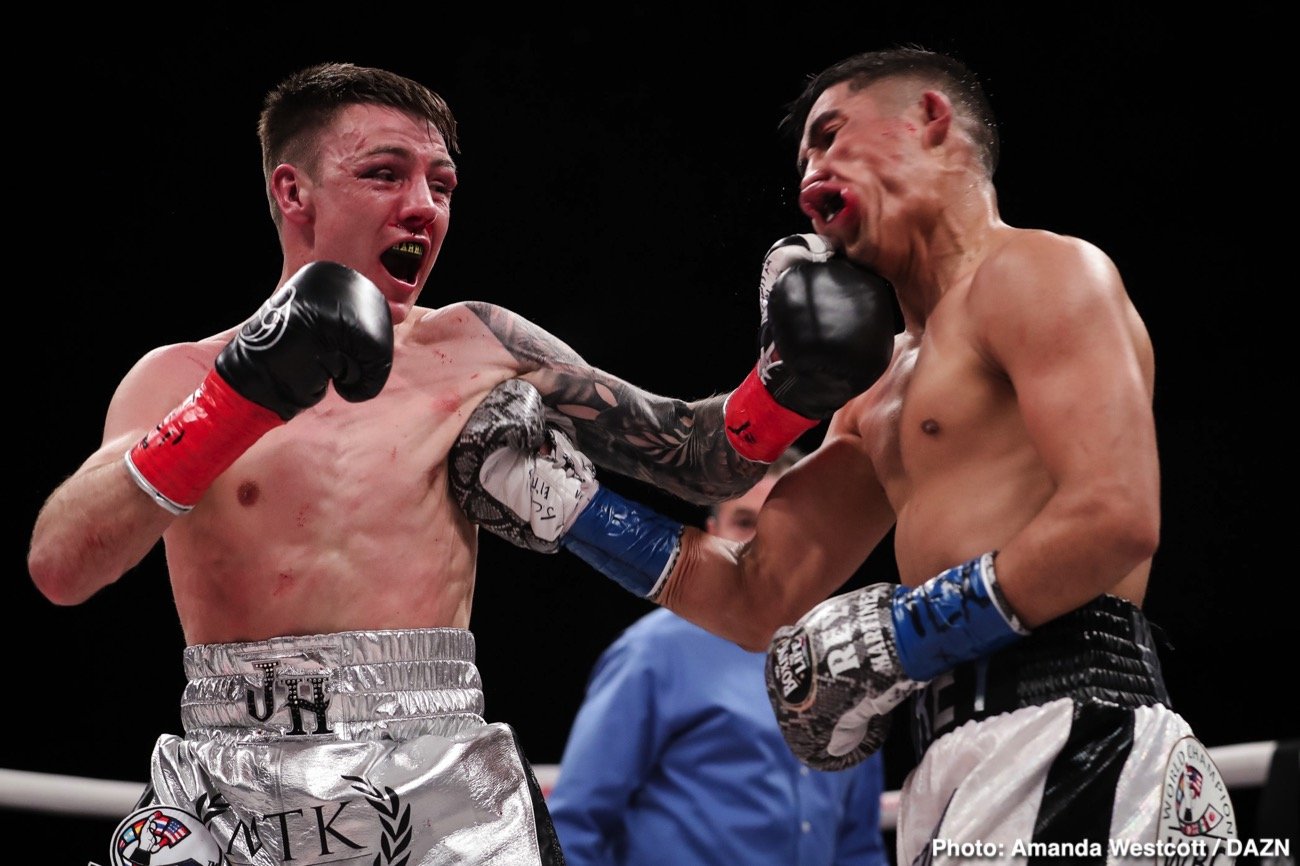 By Charles Brun:  Jay Harris isn’t altogether pleased with some of the scorecards for his loss to Julio Cesar Martinez last Saturday night. Harris felt that he fought well enough for the fight to have been scored a draw or a narrow win for Martinz, who was making his first defense of his WBC flyweight title.

European super-flyweight champion Harris (17-1, 9 KOs) fought a great fight in losing to the popular Martinez (16-1, 12 KOs) last Saturday night at The Ford Center at The Star in Frisco, Texas.

Harris won a lot of new fans in the U.S and the UK with the exciting performance he put on. After watching the fight, it’s hard to believe Harris hasn’t received much attention in his seven-year career. He hasn’t had the opportunity to display his talent until now.

In the week of the fight, few fans were giving Harris much chance of winning.

One of the judges gave Harris almost no credit for the excellent fight that he’d given Martinez in scoring it 118-109 for the Mexican fighter. That was a lopsided score that didn’t reflect how the fight went down.

A lot of fans had never heard of him, so they thought he was someone that was just brought in as the opponent to make Martinez look good. Harris surprised everyone by showing that he wasn’t going to be blasted out like Martinez’s two previous opponents.

“I enjoyed bits of it. It was a fan-friendly fight, wasn’t it?” said Harris to IFL TV on his fight with Martinez. “Some of the scorecards were s—. The 115-112, alright, considering the knockdown and dodgy first round, but I always start slow, man. I made mistakes, but I did myself proud. I thought I boxed well.

“After the first round, I thought I nicked a couple of rounds after that. He is a good champion. He’s a tough little b—–. I honestly thought I got it. It was really, really close. I thought maybe he nicked it by one or two rounds, but it could have been a draw. It was bad, man,” said Harris.

It was definitely a close fight but Martinez did look like he had done enough to win a narrow decision with the knockdown in the 10th. Martinez, 25, is trained by Eddy Reynoso, who also trains Canelo Alvarez and Ryan Garcia.

He’s someone that has gained a lot of attention in the U.S recently with his exciting performances against Charlie Edwards and Cristofer Rosales. After those two fights, it was just assumed by fans that Harris wouldn’t stand a chance against Martinez. He proved them wrong with his performance, and he’s now viewed as a potential future world champion.

It’ll be interesting to see if Matchroom Boxing promoter Eddie Hearn signs Harris after this performance, which would take him away from his full-time job working for Amazon in Wales.

“I thought it was close. That judge, no way it was 118-109. No chance. That was shocking. I can’t really argue with 115-112. I give it to him. Some of the rounds were really tight, and obviously we’re here in America. It was a good fight. After that performance, I think I’m on world level,” said Harris.

“The last couple of opponents he’s had, Martinez has pretty much destroyed them, and I just went 12 rounds and I nearly nicked it,” Harris said. “I definitely think I’m world level. There’s no way I’m going back down now. I think I’ll be a world champion in the future, definitely. It was my fault,” said Harris when asked about suffering a knockdown from a body shot in round 10.

Harris looked like not only world level against Martinez but one of the best in the division. He might be capable of winning a world title right now against one of the other champions at 112.

Even in a rematch with Martinez, you couldn’t count him out. Harris knows how to fight Martinez now, and he would likely give him a much tougher fight the second time around. Of course, Martinez probably won’t give Harris a second chance, since he’s moving on and will probably look to unify in his next fight against one of the other belt holders at 112.

The slow start for Harris in the first round didn’t help him, because he looked bad. Martinez bloodied Harris’ nose right off the bat in that round and had his face bruised.

“I chucked a double jab out or something, and he just slipped inside and smacked me under the ribs, and then smacked me with another one as well. So he smacked me twice, and I had to take a knee. I think if I had stayed on my feet, I would have got stopped. So I did the right thing, took a knee, took the count, and got up and I thought I nicked the round after that.

“I came back fighting and fought well after that. I thought I nicked it. Definitely, any of the world champions. I’ll fight anyone. I just fought, as everyone says, it the number one at the world at the minute [Martinez],” Harris said.

The jab that Harris threw wasn’t strong enough to stop Martinez’s forward momentum, seeing that he was already coming at him looking to throw. Martinez went past Harris’ jab and delivered a powerful right to his ribcage, and he went down immediately on one knee. It was a good shot from Martinez, but Harris got up by the count of 8 and fought well the remainder of the round.

“I’ll fight anyone. I’d definitely entertain that fight,” said Harris when asked if he’d be interested in fighting IBF champion Moruti Mthalane. “The support has been outstanding. There’s been a lot of good comments coming to me. I just want to say thank you to everyone. Support me in the future,’ said Harris.

IBF champion Moruti Mthalan (39-2, 26 KOs) is a big puncher with knockout wins over Zolani Tete, John Riel Casimero and Julio Cesar Miranda. However, those victories came almost a decade ago, and he’s now 37. Harris could out-box Mthalan, but he’d have to be careful because he’s still knocking everyone out.

Mayweather: ‘Wilder can BEAT Fury in third fight if I train him’ »