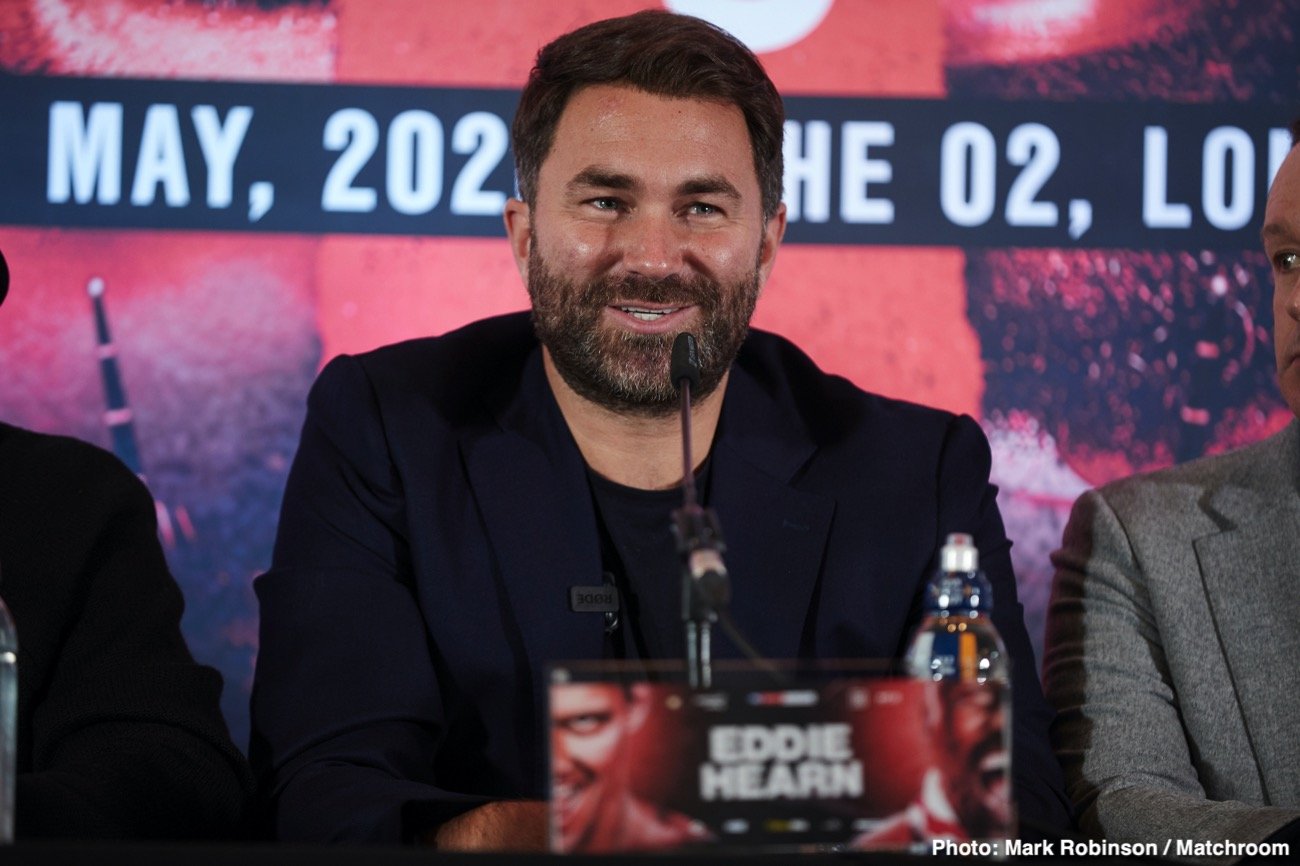 By Scott Gilfoid: Eddie Hearn has some bad news for WBC heavyweight champion Tyson Fury ahead of his trilogy fight against Deontay Wilder in July. Hearn says Fury (30-0-1, 21 KOs) WON’T be happy with the money he gets for that fight, because there won’t be as much.

Hearn told William Hill there won’t be as much money in the third Fury-Wilder fight, but he isn’t saying that’ll be. It’s possible that boxing fans won’t want to see the third Wilder vs. Fury due to how one-sided their rematch was on February 22.

Fury made it look TOO easy in knocking Wilder down twice before stopping him in the 7th when Deontay’s trainer Mark Breland threw in the towel.

Whatever money that Fury makes from the third fight with Wilder, it’ll be good. Fury won’t likely complain if he doesn’t get an increase over when he made in their second fight.

“Fury-Wilder is still a big fight,” said Hearn to williamhill.com. “Any fight that Wilder is involved in means anything can happen, but it was so one-sided. If you’re Fury and you’ve put in the performance of a career and won the WBC heavyweight belt, because you want more money in a rematch. That probably won’t happen because there won’t be as much money generated so he’s NOT going to be happy,” said Hearn.

It would be sad if Hearn’s comments about Fury making less money against Wilder were made as a result of petty jealousy, and hope that he’ll reject the third fight and face Anthony Joshua instead. Hearn promotes Joshua, and he is desperate to set up a fight between him and Fury. Whether Hearn wants to admit it or not, Wilder remains a risky fight for Fury to take.

Deontay can only get better

Fury took advantage of the worst version of Wilder last February to knock him out. But if Wilder gets things right and brings his A-game for the trilogy match in July, he could Fury to sleep for a while. Deontay can’t get worse than he showed in the second fight. That’s not possible. Wilder did everything possible wrong, and all of it together was a perfect storm that led to Fury winning.

These are the mistakes Wilder made against Fury

As many boxing fans saw, Fury was fortunate the first fight with Wilder wasn’t stopped on the spot in the 12th round when he was knocked out cold.

If Wilder does that against Tyson, is there a referee that will bother giving a count? I’d probably not. It’s too risky to give a count to a fighter that is out cold, and what referee would want to be second-guessed afterward if Fury is seriously hurt?

That’s why there’s always a chance that Fury could lose the next time around because there are so few referees that would put themselves in the position to be dumped on if he’s hurt by Deontay, and they choose to give a count instead of stopping the fight immediately.

Wilder will know what to expect from Fury

After the second fight, Wilder knows exactly what Fury will do in the trilogy match. Deontay can expect some of these things to occur:

After that dreadful performance by Wilder, he can only go up. He can’t get worse than he was last time, so it’s going to be harder for Fury the next time around, Wilder knows what to expect. He now knows that Fury is going to bulk up again, and likely hit him with rabbit shots, and do a lot of mauling.

“The conversations I’ve had with Bob Arum in the last 48 hours have been pretty good in the sense of doing a deal between the winner of these next two fights to take place in November/December,” said Hearn. We’re willing to do that deal with Wilder just in case he beats Fury in a rematch too.”V

That’s pretty audacious on Hearn’s part to be negotiating already for a fight between Joshua and Fury. I mean, Fury hasn’t even fought Deontay again, and yet Hearn is already starting the negotiations between Tyson and Joshua. So basically, Hearn is saying right there he thinks Fury is going to beat Wilder.

If Deontay needs extra motivation to beat Fury, he’s now got it thanks to Hearn.

Usyk: ‘I’m going to SMASH Eddie Hearn’ – for him wanting Joshua-Fury in December »