By Mark Eisner: The highly ranked heavyweight contender Robert Helenius (30-3, 19 KOs) took advantage of the lack of head movement for the previously unbeaten Adam Kownacki (20-1, 15 KOs) to knock him out in the 4th round on Saturday night in their WBA heavyweight title eliminator at the Barclays Center in Brooklyn, New York.

Kownacki walked into a big right hand from the 6’6″ Helenius in the 4th round that badly stunned him, sending him to the canvas. The referee didn’t count it, as he thought that Kownacki had slipped. At the time that Helenius hurt Kownacki, he was trapped in the corner and trying to fend off repeated power punches from the Polish fighter.

It looked so effortless with the way that Helenius knocked Kownacki down. The punch wasn’t as hard as some of the others than the powerful Finnish fighter had nailed Kownacki with in the first three rounds, but it didn’t matter. He was so hurt that he would have down with any clean shot.

Kownacki was too hurt after the knockdown to continue

After Kownacki got back to his feet, Helenius nailed him with another fight to the head that put him down for the second time. The referee counted this knockout thankfully.

When the 265-lb Kownacki climbed off the deck, Helenius teed off on him landing big shots that had in serious trouble. The referee David Fields then stepped in and stopped the fight at 1:08 of round 4. It was the right decision by Fielding to stop the fight, as Helenius would have kept hitting him with repeated right hands until he down.

As hurt as Kownacki was, he had little chance of surviving. He would have needed to grab Helenius in a tight bearhug of him to have had any shot of surviving the round, but he looked too hurt to do that.

In the first three rounds, Kownacki was bothering Helenius with combination punching. He was walking him down, and nailing Helenius with hard shots. To try and slow Kownacki down, Helenius threw mainly the right hands to head. When they would come in close, Helenius would tie Kownacki up. This proved to be useless for him, considering that Kownacki would continue to hit him even while being held.

Helenius went all out in round 3

Once Helenius realized that holding wasn’t going to give him any break from the pressure that Kownacki was putting on him, he then looked like mentally decided that he had to just unload on him. Late in the 3rd round, Helenius went into a do-or-die mode in which he emptied his tank looking to hit Kownacki as hard as he could to keep him off.  He appeared to stun Kownacki with a hard right in the final seconds of the round.

In the 4th round, Kownacki went after Helenius and begin to rake him with shots without stopping. At this point, Helenius hit Helenius with a fast left-right combination that sent him down on the canvas. Kownacki looked like he’d slipped because of the way he fell down but was clearly a combination that had done the job for Helenius.

“Kownacki just kept coming and coming. He’s a good fighter I have to give it to him,” said Helenius. “My strength is to punch back when people come at me. It was a good fight and a tremendous opportunity for me to be here.”

Helenius is about to become a rich man if he doesn’t lose his WBA mandatory spot before challenging for a world title.

With the victory, Helenius, 36, is now the World Boxing Association mandatory for champion Anthony Joshua. The soonest Helenius can expect to get a title shot is in 2021 at the earliest. If Joshua loses his WBA title to Tyson Fury in December, then there’s a possibility belt could be vacated soon after. Fury has said he only wants to fight twice more and then he’ll be retiring. 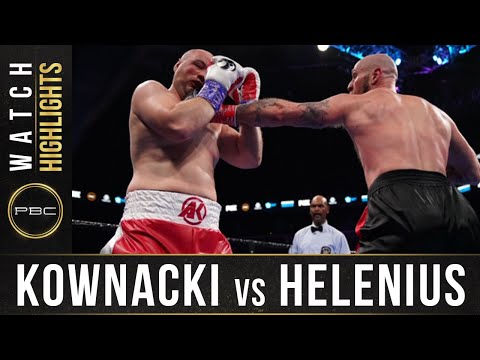 Undefeated heavyweight knockout artist  Efe Ajagba (13-0, 11 KOs) had little trouble defeating former world title challenger Razvan Cojanu (17-7, 9 KOs) by a 9th round knockout. The hard-hitting Cojanu was able to hit the 6’7″ Romanian Cojanu at will with right hands all the way through the fight. Late in the 8th, Ajagba dropped Cojanu with a big right hand to the head.

In the 9th round, the 25-year-old 2016 Olympian Ajagba continued to pound away at Cojanu until he went down. The contest was then stopped at 2:46 of round 9.

It was a good victory for the Ajagba, but he showed vulnerability in terms of his stamina. He was breathing hard, and he looked over-muscled. A good heavyweight may force him to fight harder than his body handle, and he could run out of gas. 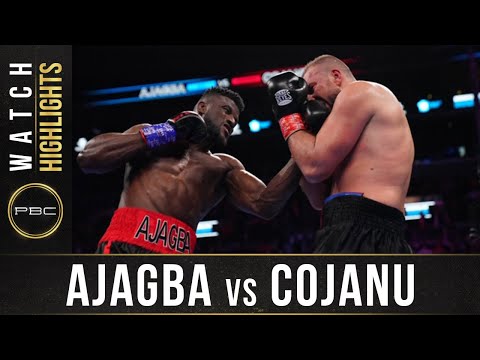 He was making a lot of noise when he would punch. Although Sanchez won the fight, he didn’t look all that impressive. He’s similar to Ajagba in terms of his stamina, and he could have problems later on down the road when he faces someone that is capable of throwing punches back at him.

The journeyman Dawejko was too limited to trouble Sanchez. At 5’10”, Dawejko resembled an out of shape cruiserweight battling a big heavyweight in 6’4″ Sanchez. The fight was won by Sanchez on size alone, and it wasn’t a great performance by him.

Heavyweights like Sanchez are the future of the division, but it’s unclear how long his shelf life will be. He doesn’t have talent like Anthony Joshua or Daniel Dubois, but he’ll likely win a world title at some point in his career. With the huge number of titles available, it’s impossible for a good heavyweight not to win one. 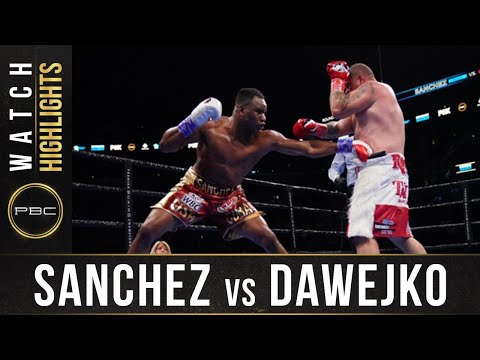