Wilder to Dillian Whyte: ‘STOP trying to get sympathy from people’ 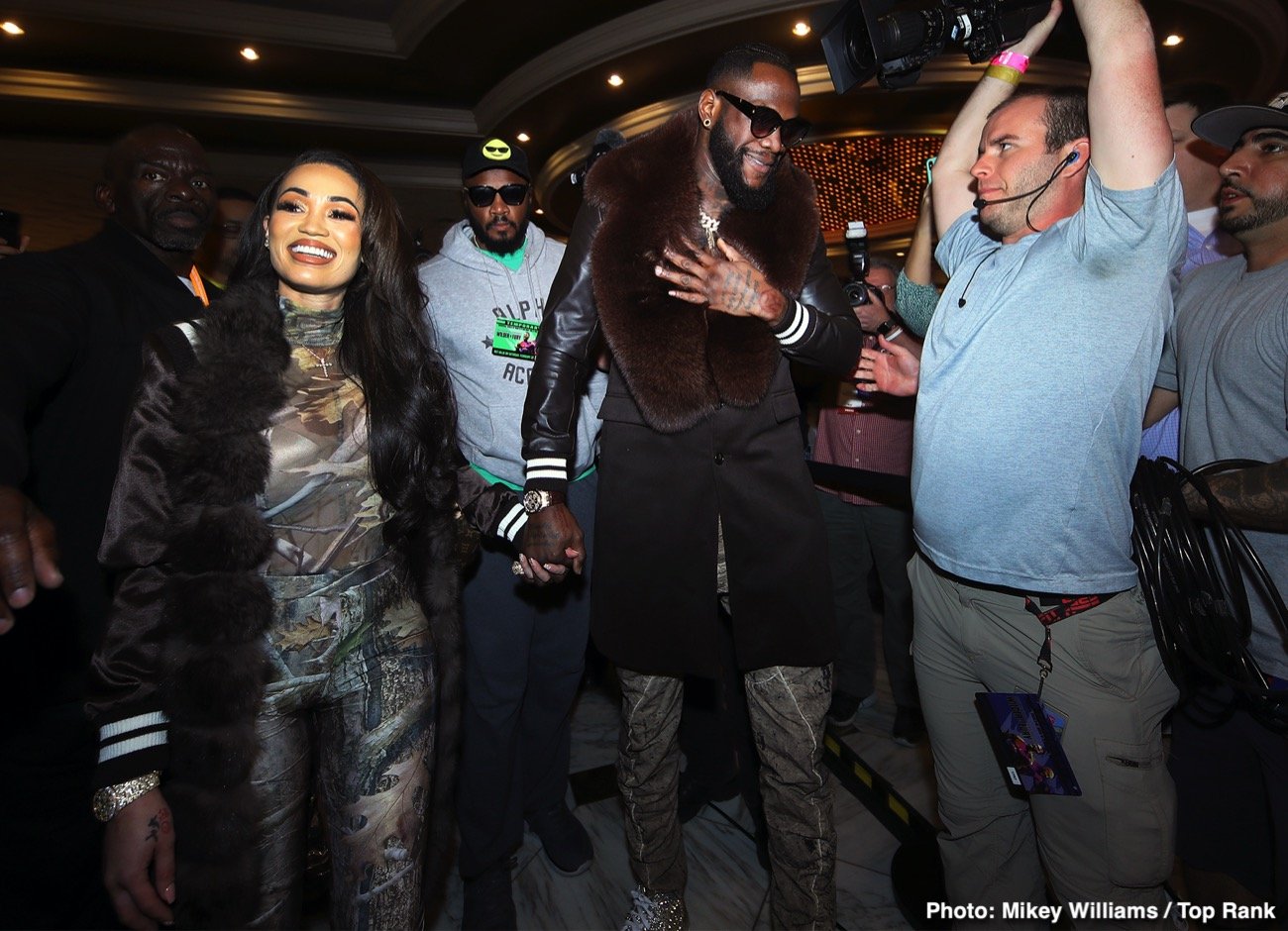 By Charles Brun: Deontay Wilder says he sees Dillian Whyte as little more than a hypocrite for using 40-year-old Luis Ortiz’s age an excuse not to fight him, but then he turns around is fighting Mariusz Wach and Alexander Povetkin, both of which are 40.

Wilder thinks Whyte ducked the Ortiz (31-2, 26 KOs) when the WBC mandated that the two face in title eliminator. Whyte didn’t want to fight Ortiz because he saw him as an old man, according to Wilder.  By Dillian not taking the fight with Ortiz, who was unbeaten at the time the WBC ordered them, he foiled his chances of becoming the WBC mandatory.

Whtye (27-1, 18 KOs) did finally take part in a WBC title eliminator last July in beating Oscar Rivas, but he could have fought in en eliminator in 2018 against Ortiz.

What Wilder doesn’t like is how Whyte and his promoter Eddie Hearn have been telling the boxing public that he’s been waiting 800 days as the WBC mandatory without getting a title shot. What Whyte is leaving out is he chose not to take part in the WBC title eliminator.

It’s unclear why Whyte didn’t just take the fight with Ortiz in 2018 so that he would have been the WBC mandatory long ago. You can argue that Whyte was better off NOT taking the fight with Ortiz because he ended up with an easier fight against Rivas. Whyte barely beat Rivas to the WBC mandatory. It’s easy to imagine that Ortiz would have knocked Whyte out had been the one that fought him in a WBC title eliminator.

Wilder views Whyte as a hypocrite

“So that when he does fight a lower opposition, and then they big him on and give him sympathy,” said Wilder in ripping Whyte for all the soft guys he’s been fighting. “That’s the thing [he wants]. Just pay attention. I give fighters the chance to fight me, and with Dillian, he had multiple times.

“He talks about the WBC, but they ordered him to fight who he calls an old man in Luis Ortiz. But who is he fighting next? And how old is Povetkin? He’s 40-something, but good trying to cover it up though,” said Wilder after the Sky Sports interview said Povetkin is in his 30s. He’s 40-years-old.

“So there it is [Povetkin being confirmed as 40]. So I don’t want any of the Brits to try and cover it up,” said Wilder. “You do a good job of covering your own people up and stuff like that, but it’s enough. time for that foolishness, especially when you’re talking about a guy [Whyte] waiting. You got to look at his own flaws,” said Deontay.

The way that Whyte has looked in his last 4 fights, he’s better off having his title shot delayed as long as possible.

“He says Ortiz is an old man, but he’s getting ready to fight a 40-year-old guy [Povetkin will turn 41-years-old in September],” continued Deontay in pointing out that Whyte is a hypocrite. “How old is [Mariusz] Wach? [40-years-old]. He’s fighting guys that are lower opposition guys in their 40s, and they’re putting him on his a—. Just imagine him fighting a young champion. Do you know what I mean?

“I’ll destroy him, but he’s been given all opportunities to fight Ortiz [in a WBC title eliminator] to fight me, and he declined it. He didn’t want to fight, but now he’s going to fight another in the same [age] range as Ortiz. He’s in the SAME range, but ‘Oh, he’s a good fighter,’ but so is Ortiz. Ortiz is an even better fighter. Dominic Breazeale felt sorry for him. He said, ‘Hey man, I got the mandatory position. I’ll fight you for it.’ He didn’t want to do that.

“Whyte just makes all these excuses,” said Deontay. “He’s got to come to realization with himself and the truth within himself that. ‘I got to take the initiative. I got to take these fights to get to where I got to go.’ Dillian Whyte is an easy style for me, trust me.

“Why would I be scared of anyone when I’m the one that knocks everyone out? His style is easy. He’s got a wild, wild style. People think I’m wild. Dillian Whyte, get your s— together. Go fight the right fights, and stop running away from the fights,” said Wilder in needling Whyte for his decision not to fight Ortiz in a title eliminator.

There might not be much left of Whyte after he fights twice in 2020. Povetkin is going to a tough fight for Whyte, and he could lose that one.

“You had the opportunity, and you know it,” Wilder said about Whyte. “You blew it. And you didn’t want to fight Ortiz because you said he was old, but you’re fighting another old fighter [Povetkin]. And then you fought another old fighter before Povetkin [Wach]. Stop trying to get people to show sympathy for you, some type of sorrow. And the people that are showing sympathy, you Brits, you should be ashamed of yourself. Get this man off his a—. Tell him to get out there, and tell him to shut up,” said Wilder.

Whyte is going to have to stay busy this year, and hope he doesn’t lose to one of the opponents Hearn puts him in with. If Whyte gets past Povetkin, he’ll need a solid opponent for the second half of the year. His fights are on Sky Box Office each time, so Hearn can’t trot out fodder level opposition. There’s a fine line that Hearn has to walk in picking Whyte’s opponents. If he picks someone too good like Michael Hunter or Filip Hrgovic, he’ll likely lose to them.