Thurman and Pacquiao pick Wilder by KO over Fury 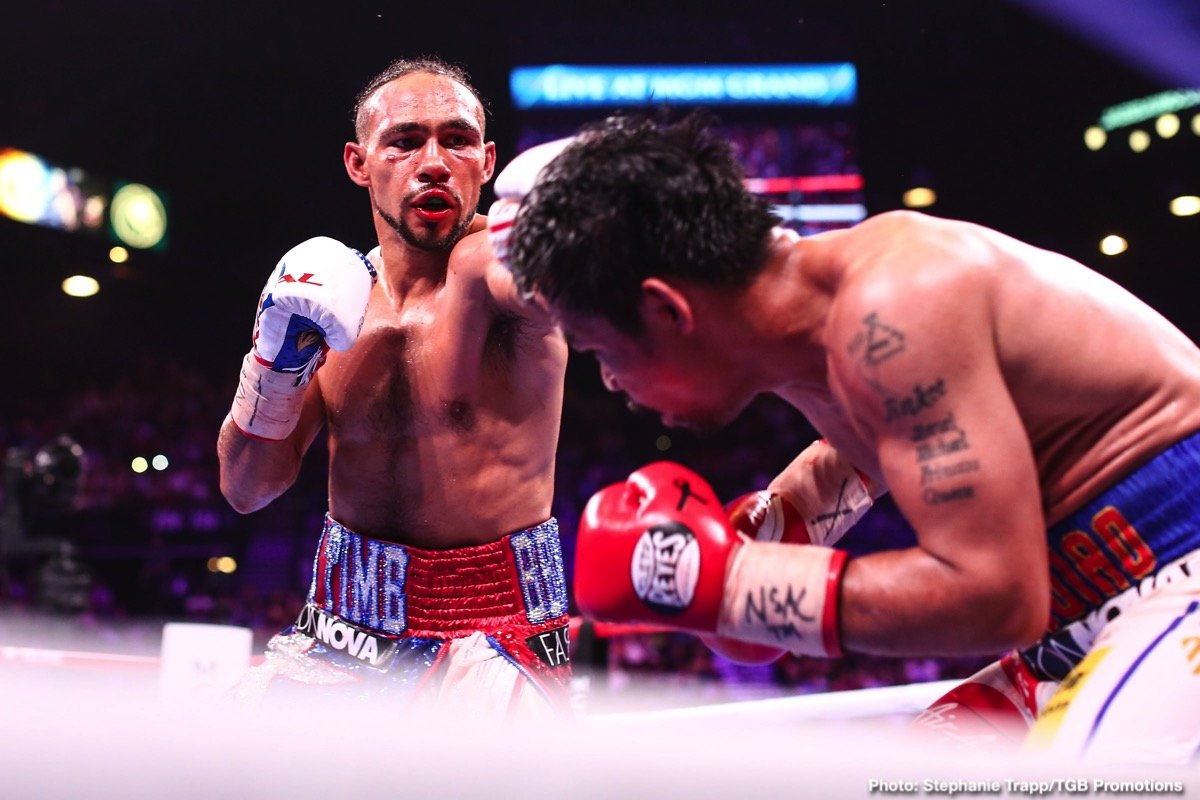 By Chris Williams: Keith ‘One Time’ Thurman and Manny Pacquiao are both picking Deontay ‘Bronze Bomber’ Wilder (42-0-1, 41 KOs) to defeat Tyson Fury (29-0-1, 20 KOs) by KO this Saturday night in their mega-fight at the MGM Grand in Las Vegas, Nevada. Pacquiao compares Wilder to knockout artist Mike Tyson with his punching ability.

Pacquiao has always been a puncher himself, so it makes sense for him to pick a guy that wins his fights in a definitive manner. Wilder doesn’t beat his opponents by punching and grabbing or running around the ring looking to jab his way to a victory. ‘

Wilder KO 10: “Never bet against a puncher, particularly one like Deontay Wilder,” said Pacquiao. “I look at Wilder like I do at a Mike Tyson, another puncher. I see Wilder winning this rematch with Tyson Fury by 10th-round knockout.”

The Gypsy King’ Fury did a lot of spoiling in the first fight with Wilder, which is why he didn’t win. Those tactics work in the amateurs, but in the professional game, you’ve got to throw down. Fury had no intention of doing that. In other words, Fury was trying to dethrone the champion on the cheap by spoiling his way to a victory over WBC champ Wilder.

Fury was dropped twice in the first fight with Wilder two years ago in 2018, and he was concerned enough about those knockdowns to revamp his training team. Tyson moved out trainer Ben Davison and replaced him with the duo of Sugar Hill Steward and Andy Lee with hopes that they’ll improve his power.

Fury’s decision to dump his trainer, change his diet and work a lot harder in training camp suggests that there’s worry on his part. Although he acts casual and nonchalant about the risk that confronts him in this fight with Wilder, his actions betray him. Fury is VERY worried.

Some people still think that the referee Jerry Reiss saved Fury by giving what they believe was ‘a long count’ in round 12. Fury rose at the count of nine. In looking at the knockdown sequence in slow motion, it’s hard not to see a situation that he should have been counted out.

“Wilder KO: “I’m going with Deontay Wilder, who is one of the most dangerous punchers in boxing history,” said Thurman. “Wilder now knows the movement, the speed and the tactics that Tyson Fury has. As long as Wilder can keep up with and move with him, I believe that he will do what he does best.

“Wilder can end the fight at any moment, aiming that right hand straight down the pipe, which he just about did in the last fight,” said Thurman.

Keith sees the power of Wilder as being the key to him winning the fight. Wilder’s bright hand eraser allows him to correct any mistakes he makes along the way during the fight this Saturday night.

As most believe, Fury, 6’9″, will build up an early lead on the scorecards, and make Wilder look bad. However, Fury won’t be able to pitch a no-hitter, which he’ll probably need to do for him to get the victory. The conventional wisdom is that if Wilder lands cleanly, it’ll be all over for Fury.

Thurman (29-1, 22 KOs) lost to Pacquiao by a 12 round split decision last July in an exciting fight on FOX Sports PPV. Keith admitted to taking off 30 lbs of weight training camp for that fight, and he didn’t have the energy to pull it out in the later rounds.

Thurman has since had hand surgery, and he’ll be coming back this year. Fans would like to see a rematch between Thurman and Pacquiao at some point. It would be interesting to see how well Thurman performs against Pacquiao when he’s NOT weight drained from having lost massive amounts of fat during training camp.

« De La Hoya on Caleb Plant: ‘It’s OVER, you won’t get Canelo opportunity ever again’